Methods: We examined the effect of 4-HBA (25 mg/kg, 50 mg/kg or 100 mg/kg i.p.) on amygdaloid kindled seizures. Fully kindled seizures were achieved by daily electrical stimulation of the amygdala. Seizure stage and afterdischarge duration (ADD) were assessed daily. The effects of 4-HBA on neuronal loss were observed before kindling and 20 days after kindling by Nissl staining.

Conclusion: Our data suggests that 4-HBA can protect against epileptogenesis by preventing the after-discharge propagation in amygdaloid kindled seizures. In addition, the anti-epileptogenic activity may be related to the neuroprotective function of 4-HBA in the late stage of kindling.

Epilepsy, one of the most common neurologic diseases, is characterized by recurrent unprovoked events and its cognitive, psychological and social comorbidities. The etiologies of most cases remain unknown, making it hard to give prophylactic treatment to prevent the development of epilepsy, namely epileptogenesis. The past 20 years have seen the introduction of more than 15 antiepileptic drugs with various mechanisms. Nevertheless, many patients continue to have seizures despite receiving treatment either singly or in combination, mainly because of the failure to block epileptogenesis [1]. Thus, there lies a great potential in drugs targeting at epileptogenesis process [2].

Gastrodia elata (G. elata) Blume has been used since ancient times in China for the treatment of a variety of conditions, including epilepsy [3]. Previous studies have shown the anticonvulsive effects of G. elata and its components in multiple models, including the ferric chloride model in Sprague-Dawley rats [4], kainic acid (KA) injection [5], PTZ injection [6], and amygdala kindled rats [7]. Wang et al. reported that an extract of G. elata shortened the duration of status epilepticus induced by Li-pilocarpine, and decreased neuronal loss in the hippocampus [8]. 4-Hydroxybenzyl alcohol (4-HBA) is one of the bioactive components in G. elata extracts, and it has pharmacological effects that are similar to G. elata [9]. Previous studies have shown that 4-HBA exhibits neuroprotective effects, including antioxidant [10,11], antiapoptosis [12] and antiangiogenic functions [13,14]. Thus, based on the evidence above, we hypothesize that 4-HBA, the main component of G. elata, also have an anticonvulsive effect, making it a potential target for treating epilepsy.

In the model of amygdaloid kindled seizures, repeated administration of initially subconvulsive electrical stimulus eventually results in focal after-discharges that spread and ultimately cause secondarily generalized seizures [15]. Using this model, epileptogenesis can be studied at various defined points during its evolution. Hence, in the present study, we used this model to observe the effect of 4-HBA on epileptogenesis, ictogenesis and neuronal loss.

Male Sprague-Dawley rats (250-280 g, Grade II, Certificate No. SCXK2003-0001; Experimental Animal Center, Zhejiang Academy of Medical Science, Hangzhou, China) were housed individually and kept at 21 ± 1°C with a 12-h light-dark cycle (lights on from 8:00 am to 8:00 pm). All experiments were carried out in accordance with the ethical guidelines of the Zhejiang University Animal Experimentation Committee and were in complete compliance with the National Institutes of Health Guide for the Care and Use of Laboratory Animals. Efforts were made to minimize both the number of animals used in the study and their suffering in the experiments. Water and food were provided ad libitum. Experiments were performed between 10:00 am and 5:00 pm.

After deep chloral hydrate anesthesia (400 mg/kg, i.p.), rats were mounted on a stereotaxic apparatus (512600; Stoelting, USA). Electrodes were implanted into the right basolateral amygdala (coordinates from the bregma: AP=−2.4 mm, L=−4.8 mm, and V=−8.8 mm). The electrodes were made of twisted stainless steel wires with a diameter of 0.2 mm (A.M. Systems, USA) and Teflon-coated except for 0.5 mm at the tip. The distance between tips was 0.7 - 0.8 mm. The electrodes were connected to a miniature receptacle, which was embedded in the skull with dental cement [16]. Animals were allowed to recover from surgery for 7 days before testing.

Procedure for kindling and threshold measurement

Electroencephalograms (EEGs) of the right amygdala were recorded with a digital amplifier (RM-6240; Chengyi, China). The after-discharge threshold (ADT) of each subject was determined by a constant current stimulator (YC-2; Chengyi, China). An initial current of 50 μA was used, and was subsequently increased stepwise was 20 μA increments. Consecutive trials were separated by at least 30 min. The ADT was defined as the lowest current required to elicit an afterdischarge that lasted at least for 5 s on EEGs [17,18]. All animals were subjected to kindling stimulation with the same current intensity as their own ADT once a day. The daily kindling stimulus consisted of a 1 s train of monophasic, 1-ms square wave pulses at 60 Hz. Animals that exhibited three consecutive stage 5 seizures were considered to be fully kindled [17]. Seizure severity was classified according to a modification of the classification by Racine [19], as follows: (1) facial movements; (2) head nodding; (3) unilateral forelimb clonus; (4) bilateral forelimb clonus and rearing; and (5) bilateral forelimb clonus, rearing and falling. Stages 1-3 were considered to be focal seizures, while stages 4 and 5 were considered to be generalized seizures (GS).

Effect of 4-HBA on kindling acquisition and fully kindled animals

In the first experiment, rats were divided into four groups matched for ADTs. 4-HBA (Sigma) was administered 0.5 h before kindling stimulation once daily at 25, 50 and 100 mg/kg doses i.p.; an equivalent volume of saline was administered in the control group. Animals were stimulated daily at ADT intensity until the control group animals were fully kindled. The seizure stage, after-discharge duration (ADD), cumulative ADD and incidence of GS were measured.

In the second experiment, rats were stimulated until they were fully kindled without any 4-HBA treatment during kindling, and were then divided into four groups as described above. On the next day, the four groups received stimuli with pre-kindling ADT intensity after pretreatment with saline, 25 mg/kg, 50 mg/kg or 100 mg/kg 4-HBA. All rats were pretreated and stimulated daily for 5 consecutive days. The seizure stage, cumulative ADD, incidence of GS and generalized seizure duration (GSD) were measured.

All animals were sacrificed 2 h after the last stimulation. The rats were deeply anesthetized with chloral hydrate and perfused transcardially with 100 ml of 0.1 mol/l phosphate buffered saline, followed by 100 ml of 4% buffered paraformaldehyde for 10 min. The brain was then carefully removed and fixed at 4°C in 4% paraformaldehyde and 30% buffered sucrose for 3 days. Coronal brain sections of 10-μm thickness were collected for the Nissl protocol. Three tissue sections were randomly selected from each rat and examined independently by two experienced histologists. The numbers of neurons in the hippocampus and parahippocampal cortices, including the bilateral entorhinal and piriform cortices were counted at a 200× magnification in each visual field, from four separate visual fields in each region.

A statistical software package, SPSS 13.0 for Windows (SPSS, Inc, Chicago, USA) was used. Data are presented as the mean ± standard error of the mean (S.E.M.). Group differences in kindling acquisition were assessed by a two-way analysis of variance (ANOVA) for repeated measures. Other variables were analyzed with one-way ANOVA when the data were normally distributed and the variances were homogeneous. Otherwise, nonparametric Mann–Whitney U tests were used. Neuronal loss was defined as the percentage of neuron density decrease between day 0 and day 20. For all analyses, the tests were two-sided and P<0.05 was considered to be statistically significant.

The electrodes were found in the right basolateral amygdale in 97 rats, and these animals were included in our study; 73 were investigated for seizure semiology and EEG, while 24 rats were sacrificed by decapitation to collect samples for histology and immunohistochemical analysis. The animals displayed no signs of abdominal cramps or other abnormal behavior after i.p. injections of 4-HBA.

Effect of 4-HBA on kindling acquisition 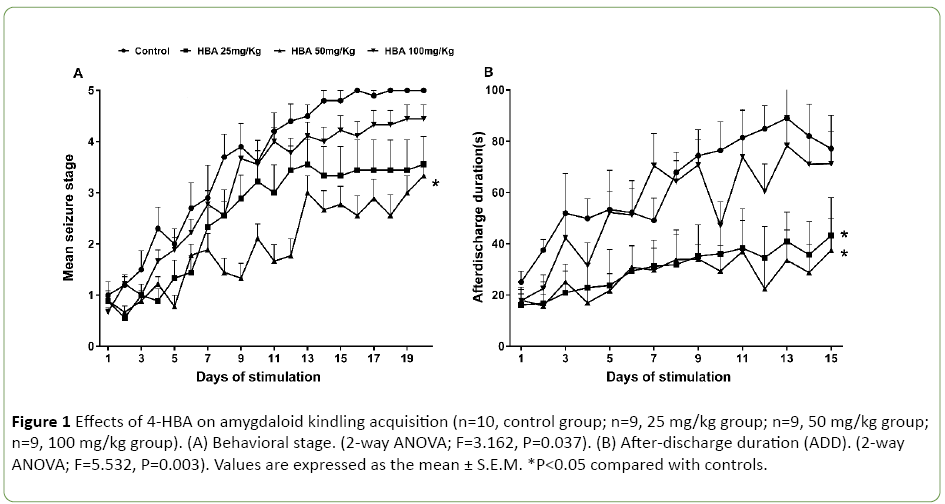 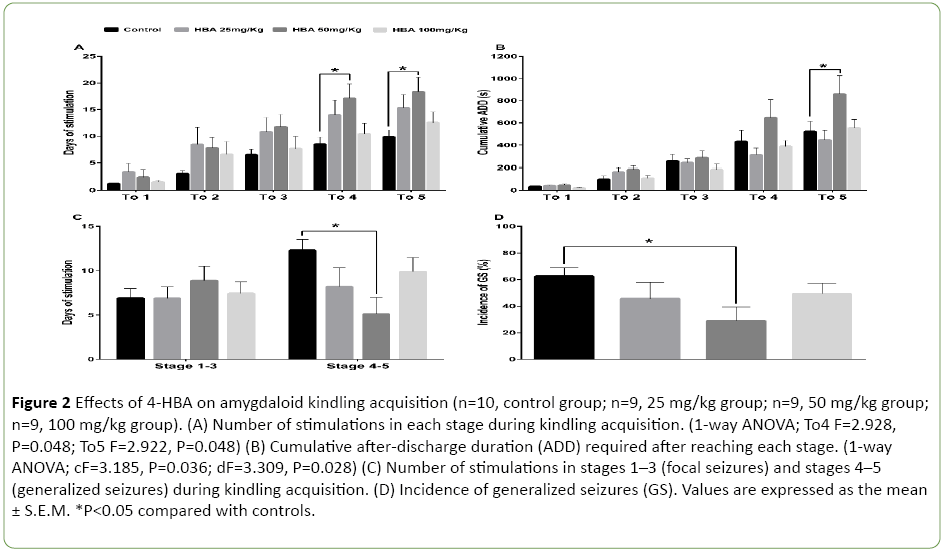 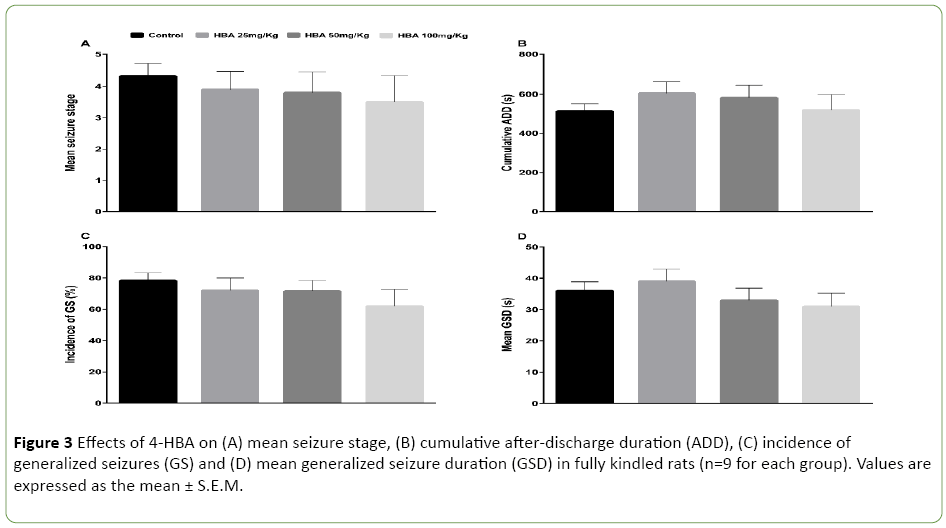 Effect of 4-HBA on neuronal loss 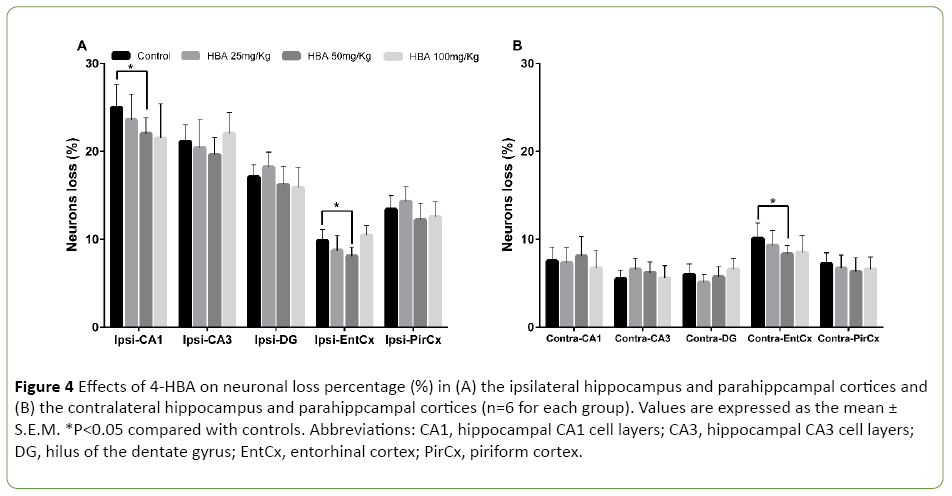 To the best of our knowledge, our study is the first to address the anti-epileptogenic effect of 4-HBA. We demonstrated that 50 mg/kg 4-HBA delayed seizure progression induced by amygdaloid kindling, and shortened the corresponding ADD. Meanwhile, 25 mg/kg 4-HBA only shortened the ADD and 100 mg/kg 4-HBA had no effect on either the progression of kindling or the ADD. This antiepileptogenic function of 4-HBA may be dose-related, which is similar to the neuroprotective effect of 4-HBA on transient focal cerebral ischemia [11]. In that study, the middle dose (50 mg/kg 4-HBA) showed more significantly reduced infarction and neurological deficits than the other doses (25 mg/kg and 100 mg/kg). Various neuroprotective antioxidants of diverse structures and activities also displayed less neuroprotection at higher doses than at lower doses [20,21].

The amygdaloid kindling seizure model enabled us to analyze epileptogenesis in graded stages. At the dose of 50 mg/kg, 4-HBA delayed epileptogenesis from partial to generalized seizures (stages 4–5), and prolonged the cumulative ADD required to reach stage 5. Furthermore, it decreased the incidence of GS, confirming that 4-HBA had an inhibitory effect on secondary generalized discharges. Furthermore, 4-HBA failed to decrease the severity and frequency of generalized seizures for fully kindled rats, which indicated that 4-HBA exerts an anti-epileptogenic effect rather than the anti-ictogenic effect. On the other hand, this phenomena suggests that the anti-epileptogenic effect of 4- HBA is not based on the reduction of seizures. On the contrary, the anti-epileptogenic action of 4-HBA is likely to be related to its neuroprotective effect. Previous studies suggested 4-HBA confers neuroprotection through upregulation of antioxidant protein expression [10], anti-apoptosis [11] and by reducing lipid peroxidation [22]. Protein oxidation and lipid peroxidation are recognized as the contributors to epileptogenesis [23,24]. It is possible that reduced oxidation plays a role in the anti-epileptogenic function of 4-HBA in the late stages of kindling. Further study is needed to confirm this hypothesis.

We have demonstrated that 4-HBA at 50 mg/kg provides an anti-epileptogenic effect by preventing both after-discharge generation and propagation in amygdaloid kindled seizures. However, 4-HBA had no effect on fully kindled seizures. Moreover, 4-HBA had neuroprotective effects on the ipsilateral CA1 and the bilateral entorhinal neurons. Additional studies are required to address whether the antioxidant properties of 4-HBA plays a role in the anti-epileptogenic function of 4-HBA during the late stage of kindling, which is clinically important to cure epilepsy.

This work was supported by grants from the National Natural Science Foundation of China [grant number 81471316] and the Traditional Chinese Medicine Program of Zhejiang Province [grant number 2010ZA069].