A Huge Primary Hydatid Cyst of Uterus: A Case Report and Review of Literature

Human hydatid cyst is an endemic disease and its distribution is worldwide affecting many countries in the Northern Africa as well as other parts of the world including Middle East area, India, South America, New Zealand, Australia, Turkey and Southern Europe. This disease is a major public health problem in our country. The incidence of the disease has been increasing in the absence of an effective prevention policy. It is ubiquitous; it is endemic to our region of “Grand Maghreb”. At this geographical ubiquity joins a ubiquitous localization. The primary involvement of pelvic organs by Echinoccocus granulosus is extremely rare. In addition to liver and lung localization representing 90% of the disease, other organs and tissues are spared. The pelvic seat is rare; it is 0.2 to 2% of cases. The isolated uterine localization is even more exceptional, it considered unusual. We report a case of a voluminous primary and solitary hydatid cyst of uterus in young female which was mimicking a pregnancy.

Hydatid cystic disease is a parasitic disease caused by the larval form of E.s granulosus [1,2]. Primary host of hydatid disease is the dog. Humans become an accidental intermediate host. The growth is slow and it may take several years before hydatid cyst become symptomatic. Hydatid cysts may be found in almost any part of the body, but are most often found in the liver (60%) and lungs (30%). The occurrence of hydatid disease is extremely low in genital organs, appearing with an incidence of 0.5%. Despite the plethora of publications concerning hydatid cyst, little is known about disease affecting genital organs especially the uterus and when it is primary This is a disease that has been known since antiquity and was described by Hippocrates with the particular term “liver filled with water”, followed by the famous Arabian physician Al-rahzes who wrote on hydatid cyst of the liver about one thousand years ago [3]. The life cycle of the parasite was acknowledged by Dew et al. [4].

A 27 years old woman admitted in the surgical department for a voluminous uterine hydatid cyst associated with a chronic pelvic pain for 15 months of evolution. For the last five months it has become very large, which push the patient to think that she was pregnant. She had no history of any chronic illness. There is no history of hemoptysis or melena, or fever, no history of metrorrhagia. General and systemic examination of the patient was good. Examination of respiratory and cardiovascular systems revealed no abnormalities. Blood investigations were within normal values. The hydatid serology was strongly positive at 1/4500 (ELISA technique). The chest X-ray examination shown no hydatid localization at the both lungs and ECG was without abnormality. A beta HCG was negative. The abdomen was distended by the presence of an abdominal mass simulating a pregnancy of six months (Figure 1). The vaginal and rectal examination combined with abdominal palpation reveal a filling of the Douglas pouch by the imposing mass associated to a pain triggered by the mobilization of the cervix. Abdominal and pelvic ultrasound (Figure 2) objective a large cystic mass it was a hydatid cyst in a stage III of GHARBI’s classification “honeycomb”, the liver was free, no other abdominal localizations. The CT scan (Figure 3) showed a large cystic formation measuring 194 × 116 mm, multilocular developed from the posterior wall of the uterus probably hydatid origin. No anomalies found in the other part of the abdomen. The diagnosis of uterine hydatid cyst location was evident. The patient underwent surgery and the surgical approach was a median laparotomy under umbilicus which reveals an enormous mass of the posterior wall of the uterus. Protection of the peritoneal cavity and isolation of the uterus by fields soaked in oxygen peroxide at 10 volumes to avoid seeding and secondary Echinococcosis (Figure 4). The oxygen peroxide (H2O2) was used as scolicide. Repeated sterilization of the cystic cavity was done by H2O2, followed by total extraction of hydatid material (Figure 5). We use in this case laparoscopy camera to check the residual cavity which allowed us to detect several daughters’ vesicles that were not even possible before (Figure 6). This explains the recurrence observed in some patients. The resection of the projecting cyst wall was performed. She passed a good and quit post-operative period. She was discharged after 7 days. A long-term contraceptive treatment was prescribed for the patient to allow the myometrium to regenerate and restore its functions associated with an antiparasitic chemotherapy “Albendazole” to sterilize the residual cavity of the cyst and to ovoid recurrences. The patient was reviewed at one and three years after surgery and there was no recurrence. Hydatid serology was frankly diminished (1/320). The histological result was in favor of hydatid cyst of uterus (Figure 7). 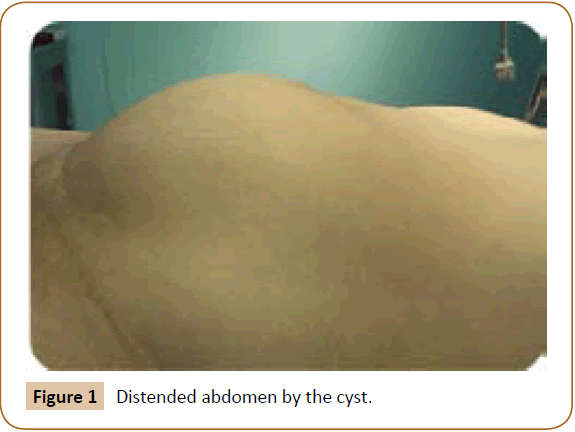 Figure 1: Distended abdomen by the cyst. Figure 2: Abdominal ultrasound objective a large cystic mass it was a hydatid cyst in a stage III of GHARBI’s classification with honeycomb appearance. Figure 4: Large hydatid cyst of the uterus exteriorized through a midline laparotomy. Several surgical approaches from simple drainage to radical liver resection have been described for hydatid cysts. Laparoscopic interventions are usually limited to cystotomy and drainage [21,22]. The laparoscopic treatment of hydatid cysts with advances and increasing experience in laparoscopic surgery, many more attempts have made to offer the advantage of such a procedure to this patient [31]. Surgery is the gold standard and primary treatment, with a variety of techniques based on the principles of eradication and elimination of recurrence while avoiding spillage [32]. Laparoscopic treatment of hydatid cyst liver has been increasingly popular parallel to the progress in laparoscopic surgery [33]. However, controversies about the role of laparoscopy in the management of hepatic hydatid cyst have not been resolved, because of limited experience worldwide. These controversies included selection of patient, surgical technique and follow up [34]. Laparoscopic pericystectomy combines the advantages of radical surgical resection with those of minimally invasive surgery [21,22]. For good cosmetic appearance effort aiming to reduce incision of laparoscopic surgery has been thought recently. For this purpose Single Incision Laparoscopic Surgery (SILS) has gained momentum in different fields of surgical practice [35,36].

This is a rare case of primary and solitary hydatid cyst in the uterus, which was diagnosed preoperatively by ultrasonography and CT scan. Detection of atypical localization is made easier with imaging procedures. The location of hydatid cyst in the genital tract is rare, and its presence in the uterus is extremely rare. A careful sonographic examination of the pelvic masses should be carried out to avoid wrong diagnosis. Laparoscopic treatment of hydatid cysts is now well established around the world with very good results and should be used whenever possible. This disease constitutes a serious problem of public health in the endemic countries. In order to interrupt the cycle of transmission of hydatid cyst, public health measures should be implemented to eradicate the disease by the removal of infected animals.