The objective was to identify whether diabetics have a higher incidence of sensorineuralhearing loss than general population and examine its duration and controlon severity of hearing loss.

Result: In the present study there were more male patients in both diabetic andnon diabetic and in diabetic patients, there were 76 (74%) cases of sensorineuraldeafness where as 43 (36%) in non diabetics. Diabetics of more than 5 years ofduration are having more hearing impairment 79% as compared with patients withfreshly detected diabetics about 42%. In controlled diabetics having SN deafnesswere 30 whereas in uncontrolled diabetics were 46 (88%). In both groups maximumcases were observed to have moderate type of SN deafness.Uncontrolleddiabetic were 1.76 and 1.68 times more risk of high frequency loss as comparedto controlled diabetics in BC threshold and AC threshold respectively. Diabeticswith more than 5 years in 84 patients had complications like Neuropathy (44%),Nephropathy (29%), retinopathy (25%), and IHD (2%) are having 73% i.e. 2.43times more risk of SNHL as compared to diabetics without complications. Out of102 diabetic patients, 62 were followed up for 9 months on treatment and thenfor HbA1C values.18 patients (29%) had value 6.5 to 7.5, 22 patients (35%) had7.5 to 8.5, 8 patients (13%) had 8.5 to 10 and 14(23%) had value more than 10.Sensory neural deafness was noted as mild, moderate and severe with respect toHbA1C levels respectively.

Alterations in inner ear glucose concentration occur in diabetes and may alter hearing. Changes in systemic insulin concentration can alter the endolymphatic potential by altering the glucose concentration [1, 2]. Although many reports in the literature have evaluated the relationship between SNHL and DM, but there is no large-scale study of both laboratory and audiometric data in diabetic and SNHL available in our country.

Hence this study was attempted to identify whether diabetics have higher incidence of sensorineural hearing loss than general population and examine the duration of diabetes and its control on severity of hearing loss.

In a one year prospective study, 102 Type II diabetic patients and 118 nondiabetic rural population of age sex matched patients from the inpatient and outpatient of ENT and Medicine departments in our institution were tested on a audiometric measures, including pure-tone thresholds.

Patients who are diagnosed of any psychiatric illnesses, substance abuse, or human immunodeficiency virus infection were eliminated from the study. Pure tone average were calculated from four frequencies (500 Hz, 1,000 Hz, 2,000 Hz, and 4,000 Hz) from each group of these patients. Patients were followed for 6 months and again pure tone average in four frequencies was calculated. Statistical analysis was done by karl Pearson’s chi square test to find the association between diabetes and hearing loss.

Table 1: Number of male: female in both diabetic and non diabetic patient

Graph 1: “Severity of hearing loss in diabetic and non diabetics”.

Table 3: “Distribution of deafness and its severity of SNHL at different blood sugar level”

Graph 3: “Distribution of number of diabetic patients in duration of Diabetes meletes.”

In 102 diabetic patients, total number of cases affected with chronic complications were 69 and 33 cases were without any complication. Out of 69, neuropathy was seen in 32 patients and in remaining 37 patients had both retinopathy and nephropathy.

Table 5c: “Deafness at different BC threshold in controlled and uncontrolled diabetic patients”. 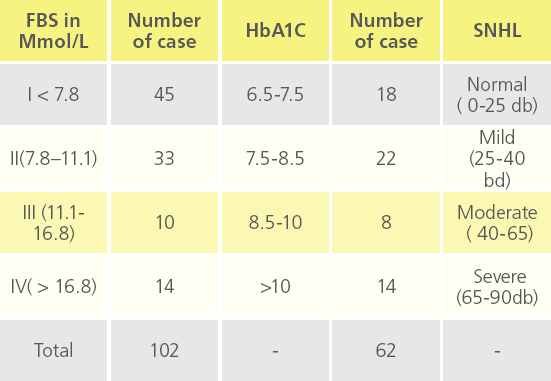 In 102 diabetic patients, 62 were followed up for 6 months and then HbA1c was recorded, whereas remaining 40 were lost during follow up at random.

Sensory neural deafness was noted as mild, moderate and severe with respect to HbA1C levels.

It is evident from a review of the otolaryngology literature that the relationship between diabetes and SNHL is complex. Most authors have concluded that patients with diabetes have worse hearing; however, a few authors, for example Harner [5] and Shuknecht[6], have denied a relationship between the two. Axelsson et al. [7] stated, “When the hearing in patients with diabetes is analyzed with respect to age group means, the results are essentially normal.” However, they did admit that some patients had a few abnormal findings, such as high-frequency pure tone loss, impaired speech discrimination ability, and abnormally decreased stapedial reflex thresholds. There is approximately a 5- to 30-dB difference in hearing thresholds across all frequencies, but more pronounced at 4 to 8 kHz [3,4,8]. It is important that most studies, including those of Celik et al. [4] and Cullen and Cinnamond 3, included patients with insulin-dependent diabetes mellitus (IDDM) only, and Huang et al.[8] included patients with insulin-dependent diabetes mellitus as well as patients with non–insulin-dependent diabetes mellitus (NIDDM).

Speech discrimination scores were generally seen not to be significantly different in diabetic patients, as shown by Cullen and Cinnamond[3]. However, Huang et al [8]observed a 7% worse discrimination score in diabetic patients. Snashall[9] observed lowered stapedial reflex thresholds in a small subgroup of seven patients, indicating recruitment and cochlear loss. This same group observed tone decay only at high frequencies.

The pathogenic effects of diabetes on the ear can be broadly grouped into neuropathic, angiopathic, and a combination of the two. The tissue effects of diabetes are thought to be related to the polyol pathway, where glucose is reduced to sorbitol. Sorbitol accumulation is implicated in neuropathy by causing a decrease in myoinositol content, abnormal phosphoinositide metabolism, and a decrease in Na+/ K+ ATPase activity [15]. Makishima and Tanaka [16] observed severe atrophy of the spiral ganglion in the basal and middle turns of the cochlea in diabetic patients with SNHL. They also observed that the VIIIth nerve showed signs of myelin degeneration, with fibrosis of the perineurium. This group also observed that atherosclerosis, a well-documented con sequence of diabetes and hypertension, was responsible for neuronal degeneration in the inner ear. Jorgensen [14] was the first to study the histopathologic properties of temporal bones in patients with diabetes with hearing loss, and observed thickening of the walls of the vasa nervorum of the VIIIth nerve, leading to acoustic neuropathy. Jorgensen also noted microangiopathic changes in the stria vasculariz. Wackym and Linthicum [11] observed microangiopathic changes in the endolymphatic sac, stria vasculariz, and basilar membrane. The diabetic patients with microangiopathic changes in the endolymphatic sac were noted to have the greatest degree of hearing loss.Genetic factors may also play a role in SNHL in a small subset of the population with diabetes and hearing loss. Van den Ouweland et al [17] observed a mutation in mitochondrial tRNA in a small subset of patients with maternally inherited diabetes with SNHL. Kadowaki et al [18] observed a similar mutation in mitochondrial DNA in the same type of patients. Since then, a variety of mitochondrial disorders that cause hearing loss have been identified; however, these seem to be uncommon. Recently, a small study demonstrated abnormalities of outer hair cell function and abnormal auditory brainstem responses in patients with diabetes.[19]

Using a rat model of diabetes, investigators have studied the histological effect of hyperglycemia on the inner ear. Smith et al 20 observed that the basement membranes of IDDM-induced rats (by streptozotocin injection, which causes pancreatic destruction) were nearly twice as thick as those of control rats. McQueen et al. [21] performed a similar experiment in a strain of rats with NIDDM (SHR/N-cp) and observed that NIDDM alone did not cause statistically significant basement membrane thickening.

Because many of the previous studies give conflicting evidence and their samples were small, we used a data mining approach to examine a large pool of patients. The VA started maintaining electronic medical records in 1989. This allows the examination and correlation of large pools of data over long periods of time. It is well documented that diabetes is a major cause of chronic renal failure by causing glomerular basement membrane thickening as well as hyalinization of afferent and efferent arterioles, leading to glomerulosclerosis and proteinaceous depositions in the kidney [15]. Diabetes also causes accelerated atherosclerosis by glycosylation of various lipoproteins. [15] Despite this, creatinine, total cholesterol, LDL cholesterol, and triglyceride levels were not statistically different between the diabetic populations with or without SNHL. Although the average creatinine level was higher in patients with diabetes than in those without diabetes (3.78 mg/dL vs. 1.29 mg/dL), total cholesterol and LDL levels were slightly lower in the diabetic population than in the nondiabetic population (195.44 mg/dL and 117.93 mg/dL, compared with 195.55 mg/dL and 122.13 mg/dL). However, the triglyceride levels were higher in the diabetic group (192.57 mg/dL vs. 156.99 mg/dL). This perhaps is because patients with diabetes are more aggressively treated with antilipemic medications that lower LDL and total cholesterol but have a lesser effect on triglyceride levels.

We observed that Out of 102 diabetic cases , 76 cases had SNHL and 15 patients had mixed hearing loss and deafness observed was mainly moderate type and male : female ratio was 2;1 and incidence of hearing impairment was also slightly more than in males as compared to females.

Though this study convincingly establishes the role of diabetes in hearing loss we suggest that auditory brainstem evoked response should be evaluated in the sample study to denote the probable site of involvement of inner ear and auditory pathways. This could not be done in our settings because of lack of facilities.