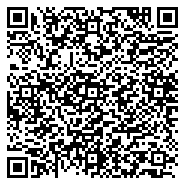 Background and objective: Lactobacilli are excellent antibacterial agents; however, scientific study on their combined action against human pathogenic bacteria is skimpy. The current study determines the antibacterial activity of commercially available probiotic lactobacilli and the curd lactobacilli, alone and in combination, against clinical bacterial isolates.

Methods and findings: Two curd lactobacilli (Lactobacillus animalis and L. gasseri) and two commercially available probiotic lactobacilli (L. acidophilus and L. rhamnosus) strains were tested for their antibacterial activity against the clinical bacterial isolates: Escherichia coli and Klebsiella pneumoniae, following agar-overlay method. The ‘R’ values (width of clear zones) due to their action against the indicator bacteria were recorded, and growth inhibitory indices (GIIs) were calculated from their combined action. The commercial lactobacilli strains, for which the ‘R’ values ranged 8-12 mm, from single action, had synergistic activity when used in combination against E. coli (GII: 0.56), while the curd lactobacilli strains having ‘R’ values 6.5-9.5 mm had synergistic activity against both E. coli and K. pneumoniae (GIIs: 0.65-0.74). The lactobacilli strains isolated were multidrug resistant.

One of the important features of probiotic lactobacilliis to achieve antagonistic activity against bacterial pathogens because of their capacity to produce lactic acid and other organic acids that lower the pH in the human intestine, and to produce H2O2 and bacteriocin, thereby establishing a hostile environment for the growth and survival of various human pathogenic bacteria [10,11]. Moreover, antibiotic resistance is a required probiotic property of lactic acid bacilli, for their survival in presence of antibiotics, especially for those strains that are co-administered with antibiotics [12]; however, such resistance among the probiotic strains be essentially innate and non-transferable in nature [13]. The probiotics having innate resistance to kanamycin (K), streptomycin, gentamicin (GEN), vancomycin (VA) and nalidixic acid suggest the preventive and therapeutic administration of such strains in treating bacterial infection in the cases of co-administration with antibiotics [14-16].

Jalilsood et al. [16] evaluated the ability of Lactobacillus plantarum to form biofilm, which provided the inhibitory effect against spoilage and pathogenic bacteria. It has been reported that the L. fermentum supernatant plus bovine lactoferrin (BLF) had synergistic inhibitory activity against MRSA strains [17]. The BLF in combination with L. reuteri cell free culture supernatant demonstrated increased antibacterial activity against pathogenic bacterial strains [18]. Uraipan and Hongpattarakere [19] suggested that the combination of lactic acid bacteria and Bifidobacterium probiotic strains from human sources might be promising in the development of probiotic products in order to prevent and control the microbial infection to humans. Anal et al. [20] characterized probiotic properties of Lactobacillus acidophilus, Lactobacillus rhamnosus and Bifidobacterium bifidum from pharmaceutical probiotic sachets that on single action showed growth inhibitory property against gram-positive as well as gramnegative bacteria strains, such as Staphylococcus aureus (S. aureus), Salmonella typhi and Escherichia coli. Tomioka et al. [21] demonstrated the effect of ofloxacin-L. casei combination against Mycobacterium fortuitum infection in mice model. Bassyouni et al. [22] studied the effect L. acidophilus strains in combination with antibiotics, and found that the strains improved the antibacterial efficacy of the test antibiotics against E. coli, Salmonella typhimurium, S. aureus and Shigella flexeneri. However, no report has been made on the combined antibacterial activity of two different lactobacilli strains, at least in this part of the globe, against human pathogenic bacteria. Therefore, the current study has been undertaken to procure lactobacilli strains from probiotic sachet available in the local medical shop, to isolate and identify lactobacilli from fermented curd, and to evaluate their antibacterial activity against gram-negative human pathogenic bacteria.

Isolation and characterization of lactobacilli

The lactic acid bacteria were isolated from two fresh curd samples (commercial curd and homemade curd) following the protocol described earlier [23], and were stored in MRS agar (Hi-Media, India) slants and stabs. The non-motile grampositive non-spore forming rod-shaped bacteria, from MRS agar plates, presenting negative catalase and oxidase test results were considered as Lactobacillus, and were subjected for further phenotypic characterization: biochemical tests and sugar fermentation [23]. The curd lactobacilli thus procured were designated as S3 and DC16. Two lactobacilli strains (named as PBL2B and PBL2C strains) procured from commercially available sachets of probiotics were subjected for their identity confirmation following the methods adopted in identifying the curd lactobacilli, as mentioned above. The control strain used in the study included Lactobacillus fermentum MTCC 9748.

Antibacterial activity of the lactobacilli procured from curd samples (S3 and DC16 strains alone and in combination) or probiotic sachet (PBL2B and PBL2C strains alone and in combination) was determined by agar overlay method [24] against the clinical isolates of E. coli and Klebsiella pneumoniae. Each of the individual Lactobacillus strains, of a pair as mentioned above, was spot inoculated alone or in combination onto MRS agar plates, with approximately 105 CFU/spot, and were incubated at 37°C for 24 h. The MRS agar plates containing the growth of lactobacilli ‘in spot form’ (≈6 mm diameter) were thereafter overlaid with Muller-Hinton agar (0.8% agar) containing a single indicator stain (E. coli or K. pneumoniae) on the individual plates and incubated at 37°C for 24 h.

Interpretation of the results

The antibacterial activity of the lactobacilli strains, alone or in combination, after 24 h incubation at 37°C, was recorded by measuring the width of clear zone (R), using the formula suggested by Carasi et al. [25] and Pisano et al. [26]:

The growth inhibitory indices (GIIs) were calculated using the formula, according to Mandal et al. [27]:

the synergistic and antagonistic interaction between a pair of test lactobacilli strains were defined with GIIs >0.5 and <0.5, respectively.

Susceptibility to 12 antibiotics, such as amikacin (AK), ciprofloxacin (CIP), cefoxitin (CX), cefotaxime (CTX), imipenem (IMP), K, trimethoprim (TR), tetracycline (TE), amoxyclav (AMC), GEN, ampicillin (AMP), vancomycin (VA) (Hi-Media, India), for the lactobacilli strains from curd and probiotic sachets was determined by disc diffusion method [28]. Single colonies of the test lactobacilli strains were inoculated into MRS broth and incubated at 37°C for 24 h. A sterilized cottonswab with test bacterial MRS broth culture was used to spread bacteria on the surface of MRS agar plate, and the antibiotic discs were placed on the surface of the agar plates. After incubation for 24 h at 37°C, the zone diameter of inhibition (ZDI) obtained around the antibiotic disc) were recorded, and isolates were categorized as sensitive (ZDI; ≥21 mm), intermediate (ZDI; 16-20 mm), or resistant (ZDI; ≤15 mm) [29,30]. Table 1: The demographic pattern of the studied subjects.

Figure 3: Combined antibacterial activity of curd lactobacilli S3 and DC16 strains against K. pneumoniae: (A) combined spot of the two strains S3 and DC16, one loop-full of culture (105 CFU) on the left spot and two loop-full of culture (2 x 105 CFU) on the right spot; the increased size of zone of inhibitions against the indicator strain is the indicative of synergism between two test lactobacilli (B) Double spot approximation of the two strains, S3 (left side) and DC16 (right side), the characteristic fused zone of inhibition is indicative of synergistic action between the two lactobacilli strains. 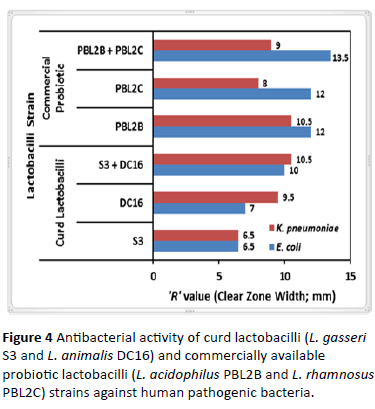 In developing countries like India, E. coli isolates causing community based infection had elevated resistance to multiple antibiotics of several kinds, and during 2008-2013, antibiotic resistance of E. coli to fluoroquinolones and extended spectrum β-lactams increased from 70%-85%, while the situation for carbapenem resistance of K. pneumoniae was with an increment from 2% (in the year 2002) to 52% (in the year 2009), as has been documented by Laxminarayan and Chaudhury [31]; the circumstances exert an impact on the outlay and the health penalty [4]. Moreover, the lifethreatening infection due to multiple antibiotic resistant bacteria is hard to treat because of the resistance to commonly as well as conventionally used antibiotics; therefore, it is essential to formulate alternative therapeutic protocol with non-antibiotic agents against the bacterial infection. Combined therapy with a mixture of classic antibiotics [32,33], or classic antibiotics and non-antibiotic antibacterial agents [27,34], has been recommended as an alternative modality for treating pathogenic infections. Zou et al. [35] reported the use of probiotics in conjunction with antibiotic in the treatment of infection with Helicobacter pylori.

Herein, we have evaluated the anti-bacterial potential of the combination of lactobacilli strains from varied sources, or from the same source against E. coli and K. pneumoniae. Davoodabadi et al. [9] reported the inhibitory activity of Lactobacillus strains of human origin and suggested their usefulness as probiotics in controlling intestinal infection with E. coli. The Lactobacillus species are usually chosen as the probiotic microorganisms because of their tolerance to low pH and bile [23], inhibitory effect against pathogenic microbes (antagonistic activity), and innate resistance to antibiotics.

The antimicrobial combinations (L. casei and L. rhamnosus with AK and GEN) demonstrated synergistic actions against Pseudomonas aeruginosa, as has been reported by Aminnezhad et al. [38]. The antibiotic susceptibility test demonstrated the resistance to ampicillin, CIP and ceftriaxone for L. plantarum strain, the cell-free extract of which potentially augmented the efficacy of the test antibiotics against Salmonella infection [8]. The antimicrobial combination has been in utilization as an efficient therapeutic approach by using varied mechanisms of action; the probiotic microorganisms produce inhibitory substances, such as bacteriocin, H2O2 and organic acids, like lactic and acetic acid [11,39], in the human intestine on consumption, on the body surface on application, or in the culture medium, where they live/colonize, and inhibit the growth of pathogenic bacteria.

In this communication, which as per the knowledge and belief of the authors stands first to undertake the study of its kind at least in our part of the globe, the probiotic lactobacilli were excellent to inhibit the growth of both E. coli and K. pneumoniae (R value: 8-12 mm), and in combination such strains had synergistic effect against E. coli (GII: 0.56); for K. pneumoniae the GII was recorded as 0.48. The curd lactobacilli alone had R value of 6.5-9.5 mm, and in combination the strains showed synergism against both the indicator bacterial pathogens (GII: 0.65-0.74); moreover, S3-DC16 combination effectively had synergistic effect by modified disc approximation test (Figure 3). Such differences in the antibacterial activity of the lactobacilli are due to the strain and their source variation, difference in the target bacterial strains, and the variation in the production of antimicrobials by them, as well, which needs further study. Thus, although the probiotics, which are in current usage, are generally regarded as safe, prudence in the selection of probiotic strain(s) for patients has been considered necessary as well as urgent, and full concern for ‘risk-benefit’ ratio before prescribing is suggested, in compliance with the ‘fit for human consumption’ protocols [40].

The current research underlines the necessity of antibiotic susceptibility testing for the newly isolated lactobacilli projected for probiotic usage. The isolated curd lactobacilli (L. animalis DC16 and L. gasseri S3) strains had resistance to one or more of the antibiotics VA, CIP and K, while the commercially available lactobacilli (L. acidophilus PBL2B and L. rhamnosus PBL2C) strains showed resistance to AK, CIP, GEN, K, VA. As has been reported by Bassyouni et al. [22], the L. acidophilus-CIP combined therapy against infective gastroenteritis was effective in terms of decreasing the CIP dose and hence the CIP adverse effect on the balance of microbial flora in human intestine. Thus, the current communication suggests the usefulness of natural curd lactobacilli as well as the commercially available probiotic lactobacilli strains, alone or in combination, or in combination with some conventionally used antibiotics, as therapeutics against bacterial infection to humans. In addition, regular consumption of curd, both homemade and commercial, is required to get probiotic effect among the Indian population, since curd is an excellent source of probiotic lactobacilli; however, further studies are warranted with local curd samples regarding the current issues.