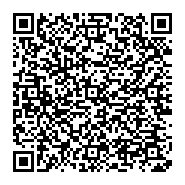 Diabetes mellitus is a challenging disease; its health damage on human population is increase globally. The need for remedy of diabetes is progressively pursued by professionals. The adverse effect of synthetic drugs such as metformin and glibenclamide are becoming a source of concern. This paves way for herbal therapy with no or minimal site effect to control and treat diabetes mellitus. This research evaluates the effect of Irvingia gabonesis seeds extract on some lipid profile indices of wistar albino rats. Glibenclamide was used as a control standard drug. A 200 mg/kg of alloxan was used to induce diabetes on rats after fasting. The median lethal dose was ascertained at 5000 mg/kg of the extract, with no indication of toxicity. Upon induction of alloxan, fasting blood glucose was significantly (p<0.05) high, which indicates defectiveness of insulin or damage pancreatic beta cells. The control group treated with Glibenclamide had low blood sugar level, compared to diabetic rats. Total cholesterol and low-density lipoprotein levels treated with 100 mg/kg of the extract was significantly (p<0.05) lower than the group treated with 200 mg/kg. Triacylglycerol concentration was significantly (p<0.05) lower in rat treated with 200 mg/kg of the extracts than rats treated with 100 mg/kg of the extract, compared to the normal control. High density lipoprotein (HDL) of the treated rats was significantly (p<0.05) higher compared to the control diabetic rats. The lipid peroxidation index reduced significantly (p<0.05) in treated groups compared to the control group and extracts treated groups relative to the diabetic untreated rats (control). Findings suggests that Irvingia gabonesis seeds extracts is considerably safe and potential therapy for management and control of type 2 diabetes mellitus, due to its ability to lower blood glucose level and ameliorate the effect on lipid profile.

It has been established that placebo and randomized trial treatment was an approach that led to the discoveries of some plants that are beneficial to human’s health. Such plants were used as food to increase perspiration, bowel movement, pain relief and healing. The use of phyto-medicine has been identified as a means of studying the potentiality of future medicines. Over production of free radicals and oxidative stress has been associated with the onset of diabetic complications [1]. Diabetes is a common metabolic disorder linked with diabetic ketoacidosis, hyperosmolar coma, cardiovascular problems, kidney failure, eye damage, non ketotic hyperosmolar coma and foot ulcers. The condition develops due to abnormalities in carbohydrate metabolism and insulin homeostasis, which give rise to high blood sugar level with symptoms such as elevated hunger and thirst, polyuria, glycosuria, and lethargy [2]. Several treatments have been made and success recorded, but the adverse effects associated with synthetic medicine are rather creating fears than remedy. For example, the application of a potent antidiabetic medicine called glucovance.

Glucovance is a combined therapy, made up of two andidiabetic medicines, which belong to biguanide (metformin hydrochloride) and sulphonylurea (glibenclamide). Metformin hydrochloride and glibenclamide have different mechanism and sites of actions. Though their actions are complement to each other. Metformin reduce hepatic glucose production, by increasing insulin sensitivity in the muscles (where lipid is concentrated), thereby delaying glucose absorption. On the other hand, glibenclamide stimulate the release of insulin by the pancreas. Therefore, this medicine is indicated for adults whose glyceamia level is stable and well control [3]. The adverse effect of this drug at slightest dereliction or contraindication are severly consequential. Its why the need for complementary and alternative phyto-therapy was investigated on lipid profile of diabetic wistar albino rats. Irvingia gabonenesis plant is indigenous to West Africa and known locally as bush mango, dikanut or African mango (Figure 1). The flesh of Irvingia is widely consumed [4]. Irvingia gabonenesis seeds are rich in oil [5], used for making paste (dika) (Figures 2 and 3). The shell is mixed with palm oil to treat diarrhoea and reduce breastfeeding duration, while the immature fruits are used to fasten ripening of unripe mature banana and fruits. The peels from the stem bark are consumed for hernias, yellow fever, and dysentery and to reducing the effects of poison [6]. The Mende tribe of Sierra Leone grind the bark into paste to apply on the skin for pain relief [7]. African bush mango fruit juice produces quality wine at 8% alcohol after 28 days fermentation. The much was comparable to the colour, flavour, sweetness and acceptability of a German reference wine [8]. The kernels of African mango are classified as oil seed. The fat extracted from the kernel is similar to margarine or cooking oil. Flour may also be produced from the kernel [9]. 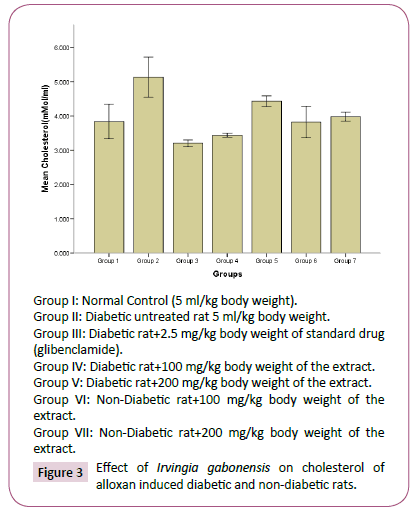 In diabetes, dikanut fibre finds its benefits in diabetic rats when it was administered in four weeks. The dikanut fibre supplement was effective than cellulose and membrane bound enzymes of the intestine and hepatic glycolytic enzymes, leading to reduced absorption of glucose [10]. This of course was similar in activity to metformine. A similar study was performed with streptozotocininduced diabetic rats, where dikanut fibre was introduced. Results showed reduction in plasma levels of glucose, cholesterol and triglyceride level [11]. In obesity, they were mechanisms against obesity with African bush mango supplementation; including inhibitory effects on glycerol-3-phosphate dehydrogenase was involved in converting glucose to stored fat [12]. Its beneficial effect on peroxisome proliferator-activated receptor (PPAR)- gamma involved adipogenesis and insulin sensitivity [13], similar to metformin action. Up regulation of adiponectin, which enhances insulin sensitivity and endothelial function, but decreased leptin expression by enhancing leptin sensitivity, inhibits food intake and stimulates thermogenesis. The antidiabetic effects of human type 2 diabetes and streptozotocin induced diabetic rats of the seeds extract have been reported [14]. The aqueous stem bark extract has demonstrated considerable anti-obesity and hypoglycaemic effect in normal rabbit [15]. African mango leaf and root extract have inhibitory activity against several bacteria and fungi strains [16]. It mechanism of action include membrane disruption by terpenoids and inactivation of microbial adhesion, enzymes and cell envelope transport protein by ellagic acidic compounds [17]. A methanol extract of African bush mango exhibited dose dependent inhibition of indomethacin-induced gastric ulceration in mice [18]. The administration of exogenous insulin treats type 1 and 2 diabetes. Current drugs used in diabetes management are grouped into three categories. The first group of drugs increase endogenous insulin availability. These include glibenclamide, the glinides insulin analogues, glucagon like peptide 1 (GLP-1) agonists and dipeptidyl peptidase-iv (DPP-iv) inhibitors. The first two members of these groups act on the sulfonylurea receptor in the pancreas to promote insulin secretion (GLP -1 agonists) and DPP-iv inhibitors as mention previously. The second group includes the thiazolidine-diones, which are agonists of the peroxisome proliferator-activated receptor gamma (PPAR?) and biguanide metformin. Biguanides derived from Galega officinalis is an excellent example of anti-diabetic drug developed from plants [19]. The third group comprises the α-glucosidase inhibitors such as acarbose which reduce the digestion of polysaccharides and bioavailability [20]. All the existing therapies however have limited efficacy, limited tolerability and/or significant mechanism based on their side effects [21]. This motivates the use of natural products for medicinal treatment of type 2 diabetes mellitus.

Thirty-five (35) adult Wistar albino rats of average weight 100-200 g and twenty-seven adult albino mice were used for this study. They were obtained from the animal house of the Department of Veterinary medicine, University of Nigeria, Nsukka. The animals were acclimatized for fourteen days with 12-hour light and dark cycle. They were placed on regular feed and water ad libitum.

The chemicals employed in the study were of analytical grade and were products from Sigma Aldrich, Germany and British Drug House, England.

The seeds of Irvingia gabonesis were oven dried at 50°C and pulverized into fine powder using a creston high speed grinder.

Extraction Procedure: A 558 g of the pulverized seeds of Irvingia gabonesis were macerated in a mixture chloroform- ethanol in a ratio 2:1 for 48 hours at room temperature. The macerate was filtered using Whatman No 4-filter paper and the filtrate shaken with 20% (v: v) of water to obtain two layers. The lower layer (chloroform layer) was separated from the upper layer (ethanol layer) using a separating funnel. Both layers were concentrated on a hot plate/magnetic stirrer at 40°C to 60°C. The extract was stored in an airtight plastic container in the refrigerator (4°C) and used for the study.

The method of Rie et al. [22] was used for acute toxicity test of ethanol extract of Irvingia abonensis seeds.

Thirty-five (35) adult albino rats weighing between 100-180 mg/kg was grouped into 7 different cages of 5 rats per cage, acclimatized to laboratory standards for 9 days with free access to water and feed ad libitum. After acclimatization, their weights were measured and baseline glucose level was determined after overnight fasting prior to the induction of diabetes. Alloxan monohydrate was administered intraperitoneal with 200 mg/ kg body weight dissolved in ice cold normal saline. After two days the rats with blood glucose level greater than 16 mmol per liter were considered diabetic and used for the experiment. The treatment lasted for fourteen days (14) days, during which the blood glucose concentration of the rats was taken on days 0, 3, 7, 11 and 14. The route of administration was oral with the aid of intubation tube. The group and doses administered were summarized below: 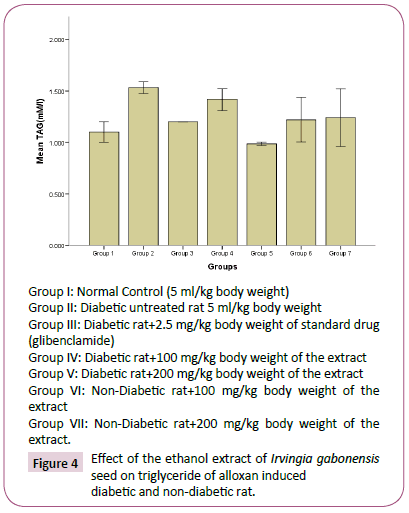 Figure 4: Effect of the ethanol extract of Irvingia gabonesis seed on triglyceride of alloxan induced diabetic and non-diabetic rat. 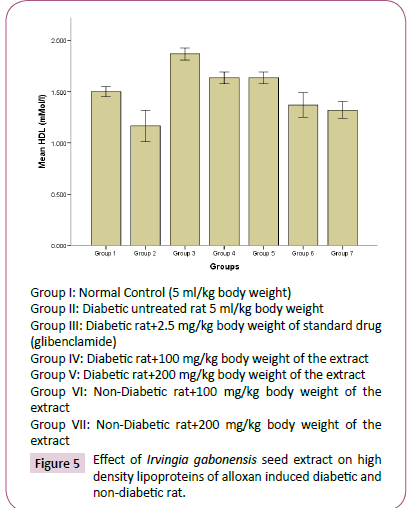 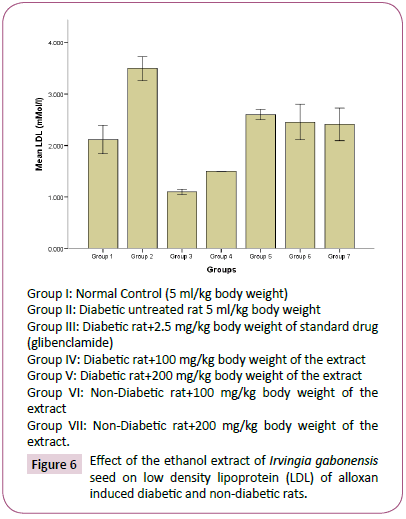 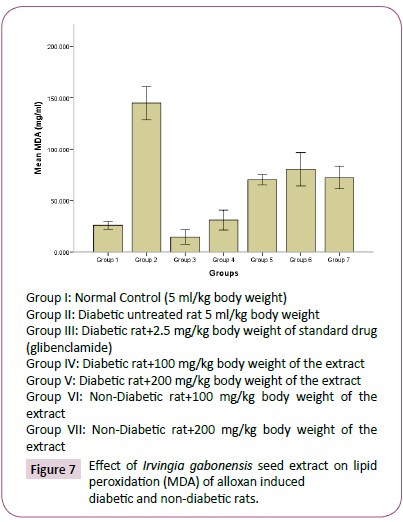 The ethanol extract of Irvingia gabonesis seed is a potent antidiabetic agent due to it ameliorating effect on type 2 diabetes mellitus via reduction of total blood glucose concentration of alloxan induced diabetic rats. This provides claims that the plant (bark, leaves and seeds) was able to ameliorate abnormalities associated with Diabetes Mellitus.

All the authors contributed equally to this investigation.