3Institute of Medical Biometry and Informatics, University of Heidelberg, Germany

Methods and findings: Patients who underwent LAAO for treatment of atrial fibrillation at the Heidelberg Department of Internal Medicine III were eligible for this observational, explorative, single-center, non-randomized cohort study, between July 2013 and January 2016. Neurological examination and neuropsychological assessments were conducted one day before LAAO and one month after LAAO, using a comprehensive neuropsychological test battery that included several cognitive domains including executive function, verbal fluency, verbal and non-verbal memory. Paired t-tests and correlation analyses were applied to compare test results pre- and post-intervention. In addition, we descriptively analyzed the number of relevant changes (± 1 standard deviation) over all cognitive domains for each patient. 20 patients completed the study. Mean age was 72.6 ± 6.8 years and 15 (75%) were male. There were no significant changes in any of the tested cognitive domains in group statistics. Descriptive single case analysis showed more deteriorations than improvements by one standard deviation over all cognitive domains in three patients, while in 11 patients the number of positive changes exceeded the number of negative changes.

Conclusion: LAAO does not adversely affect cognitive function in the majority of cases.

Postoperative cognitive dysfunction (POCD), defined as a new cognitive impairment arising after a surgical procedure [1], is a frequent postoperative phenomenon. However, data on its incidence are inconsistent and depend on the procedure. POCD was described in cardiac surgery as coronary artery bypass surgery [2,3], but also in extracardiac surgery [4,5]. Elderly people and patients with coronary heart disease seem to be especially vulnerable for POCD, but as many as 36.6% of surgical patients aged between 18 and 39 years are also affected by POCD [4]. On the other hand, meta-analysis of 2043 patients receiving coronary artery bypass graft surgery suggested an improvement in cognitive function in the first year following coronary artery bypass surgery [2]. POCD is not restricted to open cardiac surgical procedures but has also been reported in less invasive procedures as cardiac interventional approaches including ablation [6] and transcatheter aortic valve implantation (TAVI) [7,8]. Overall, however, in TAVI, a review resumed that global cognition improved or remained unchanged [8].

Besides age and concomitant cardiovascular disease, the extent of the surgical procedure has been identified as a risk factor for the development of POCD [1]. In contrast, no clear association between POCD and general or regional types of anesthesia has been established so far [1,9].

In patients with atrial fibrillation (AF), current US- and European guidelines consider left atrial appendage occlusion (LAAO) as an alternative for the prevention of stroke when anticoagulation is contraindicated [10,11]. Due to the high age and frequent concomitant cardiovascular diseases in patients eligible for LAAO, these patients could be at a relevant risk for POCD.

In this study, we aimed to explore the prevalence of cognitive deterioration one month after percutaneous LAAO compared to pre-procedural assessment.

This prospective consecutive observational cohort study was performed at the Heidelberg University Hospital after approval of the local independent ethics committee, and all investigations have been conducted according to the principles expressed in the Declaration of Helsinki of 1964 and its later amendments. Study procedures are summarized in Figure 1. 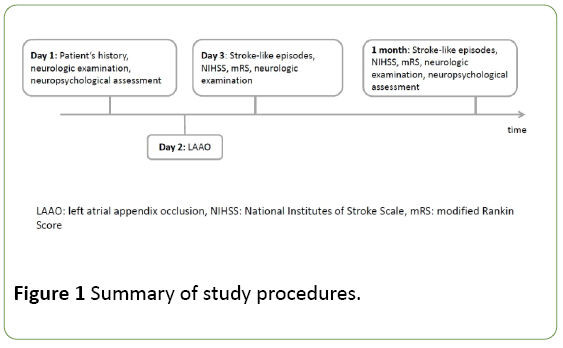 All patients who were planned to undergo LAAO between July 2013 and January 2016 were eligible. This study was part of a comprehensive project to describe the cognitive changes and the frequency of silent brain infarcts after LAAO [12]. Both studies had an overlap of patients. The inclusion criteria encompassed: (1) oral and written informed consent to take part in the study; (2) age ≥ 18 years; and (3) sufficient skills of German language, as all neuropsychological exams were performed using German test versions. Exclusion criteria were: (1) denial to participate in the study; (2) symptoms of aphasia, as identified with the ‘Token Test’ [13]; (3) visual neglect, as identified by the CATS test [14]; (4) symptoms of major depression, as revealed with the Rasch-based Depression Screening (DESC) questionnaire ([15]; cutoff value: sum score ≥ 12 points pre-LAAO or mean value of DESC pre-/post-LAAO ≥ 12 points). The primary study endpoint was cognitive function one month after LAAO. Secondary endpoints were postinterventional ischemic stroke, transient ischemic attack (TIA) and intracerebral hemorrhage (ICH) after LAAO. Diagnoses of TIA, ischemic stroke and ICH were made according to standard criteria [16-18]. We recorded clinical characteristics of all patients at baseline, including the type of AF (paroxysmal or permanent), the presence of arterial hypertension, diabetes, history of intra- or extracerebral hemorrhage, ischemic stroke or TIA.

Additionally, we determined the CHAD2DS2vasc and the HAS-BLED scores [19]. Within the neurological examination at day 1 (before LAAO) and day 2 as well as one month after LAAO, the National Institutes of Health Stroke Scale (NIHSS) and the modified Rankin Scale Score (mRS) were determined for each patient.

A flow-chart of the study population is provided in Figure 2. A total of 27 patients were enrolled. Of those, 7 patients had to be excluded from final analysis, of whom one male patient suffered a periinterventional stroke due to air embolism and subsequent inability to undergo neuropsychological assessment post-LAAO (Figure 2). 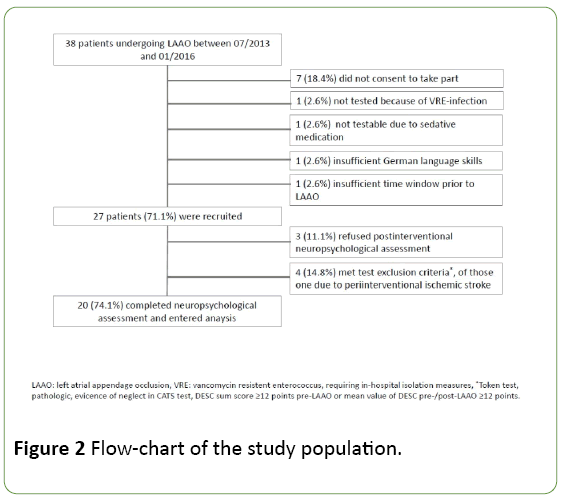 Figure 2: Flow-chart of the study population.

LAAO was performed by two experienced interventional cardiologists (NG, SP) according to local routine practice. The study had no influence on the procedure. An individualized anesthetic approach was used with local inguinal and general anesthesia using midazolam and/or propofol, respectively. Additional administration of intravenous morphine was possible. Routine measures of oxygenation, blood pressure and heart rate monitoring were documented. LAAO guidance was assured by transesophageal echocardiography combined with fluoroscopy. Access to the left atrium was obtained via the right femoral vein and subsequent transseptal puncture. The occluder (Amplatzer Cardiac Plug and Amulet device, both St. Jude Medical, Saint Paul, Minnesota, USA; or WATCHMAN™ device, Boston Scientific, Marlborough, Massachusetts, USA) was implanted into the left atrial appendage. After the procedure, antithrombotic treatment was started with aspirin and clopidogrel for the first three months, followed by a monotherapy with aspirin.

Follow-up was conducted one month after LAAO during a personal visit. The study follow-up included the patient’s interim history for ischemic and hemorrhagic stroke, TIA, systemic emboli, intra- or extracranial bleeding events, a neurological examination including the NIHSS and the mRS, and the repetition of the neuropsychological assessment.

Statistical analyses were performed using the Statistical Package for the Social Sciences (version 22.0; SPSS Inc., Chicago, Illinois, USA) and MATLAB (Version 9.0; The MathWorks, Inc., Natick, Massachusetts, USA). Continuous data were checked for normal distribution using the Kolmogorov-Smirnov test. Accordingly, in the remainder of this paper; they are reported as means and standard deviations (SD) or medians and interquartile ranges (IQR). Categorical data are presented as frequencies and percentages. Measured values pre- and post-LAAO were evaluated using paired Student’s t-test and Pearson correlation for normally distributed data and using Wilcoxon’s signed-rank test and Spearman correlation in the case of not normally distributed data. A p-value<0.05 was considered statistically significant. Whenever an individual patient showed a change of a cognitive test result in post-LAAO testing exceeding ±1 SD compared to pre-LAAO test results, this was regarded as a deterioration or improvement in the respective test [25]. Since changes of cognitive scores may occur quite frequently within a battery of 13 test variables, we offset all improvements against all deteriorations in each patient and considered only a net change of ≥1 in either direction as relevant.

NIHSS (mean 0.8 ± 1.7) and mRS (mean 2.0 ± 0.86) were unchanged in the study sample pre- and post-intervention. At one month, none of the patients had suffered a TIA, an ischemic stroke or a clinically evident ICH. All patients were treated with dual antiplatelet therapy with ASS and clopidogrel at the follow-up visit at one month.

Table 2 displays the results of the statistical evaluations for each of the neuropsychological tests. When comparing pre- and post-interventional assessments, there occurred no significant change in any of the tests; moreover, thecorrelations between pre- and post-LAAO test results were significantly positive in any of the subtests.

Figure 3 depicts all individual test results pre- (T1) and post- (T2) LAAO, separately for each component of the neuropsychological examination; each participant is assigned an individual upper-case letter. In some participants, the individual scores of a given test deteriorated pre-/post-LAAO by >1 SD; the respective individuals are denoted in black letters in Figure 3, and the corresponding shift is illustrated using bold black lines. With the exception of TMT A/B and CERAD-plus constructive praxis, at least one such instance occurred in any of the conducted tests. There were no significant changes of the cognitive performance within the group analysis with a non-significant trend towards an improvement in three variables. Our descriptive single case analysis showed a net improvement, defined by the number of positive changes minus the number of negative changes over all test variables, in 11 patients, while three patients had a net deterioration. Of these three patients, one had a decline ≥ 1 SD in three of the test variables, one other patient in two tests, and both without an improvement in any of the other tests. According to typical criteria in the POCD literature this could be interpreted as a cognitive decline [25]. However, since this study did not enroll a control group, the base rate of such changes is unknown; and given the large number of cognitive variables we employed, it cannot be ruled out that they did occur by chance alone.

Our group findings are consistent with a previous study analyzing cognitive function after left atrial catheter ablation for AF in which no cognitive deficit was found on detailed neuropsychological assessment within 6 months after ablation [26]. After pulmonary vein isolation in AF, no clinically overt cognitive deficit developed upon 6 months [27]. These results are consistent with those of a metanalysis on cognitive function after coronary artery bypass graft surgery [2]. Their medium term-results showed a post-operative decline in two of four main tests indicating a decrease in psychomotor speed within two weeks after coronary artery bypass graft surgery, but a significant improvement relative to baseline in all four measures by three months [2]. Thus, the time of postinterventional assessment is an important factor. To minimize the effect of immediate interventional procedures including anesthesia on cognitive performance, we performed the postinterventional neuropsychological exam one month after the procedure. However, a consensus on optimal timing to test for POCD has not been established [2]. Moreover, we used different test batteries compared to previous work [26] and tested more single domains than previous studies [27] trying to describe cognitive function in detail. Comparability of our findings is therefore limited as different times of postoperative testing were chosen and composition of neuropsychological assessment was different. A further impact on the patient’s cognitive and motor function may consist in new postinterventional ischemic brain lesions. Silent ischemic brain lesions are detected in 75 to 90% of patients after TAVI [28] but occur only in 4.8% in LAAO patients [12]. However, a review of the cognitive performance after TAVI suggests a stable or improved global cognition 3 months postoperative [8]. Studies correlating diffusion weighted imaging (DWI)- lesions and cognitive function in cardiovascular procedures have not established a relationship between peri-procedural cognitive dysfunction and silent DWI lesions [26,29]. Further studies with combined MRI- and longitudinal neuropsychological assessment might clarify the clinical significance of silent post-procedural DWI-lesion for cognitive function.

The strengths of our study include the comprehensive test battery applied by fully-trained psychologists and the prospective and consecutive enrollment. Limitations are the single center approach, the small sample size and the absence of a control group. We did not collect data on patient-related factors like preoperative cognitive impairment, habits and drug use. Furthermore, practice effects may have influenced our results. Such effects have been reported in both CERAD and TMT-B [30,31].

To conclude based on our group level data, LAAO appears to have no negative cognitive sequelae in an elderly patient cohort with AF. To confirm this finding and to evaluate the rate of POCD in single cases a controlled trial with a larger and ideally multicenter patient cohort is necessary.

The authors would like to thank Johanna Mair-Walther, PhD, for help with the neuropsychological assessment.