Copyright: © 2016 Zhao Q. This is an open-access article distributed under the terms of the Creative Commons Attribution License, which permits unrestricted use, distribution, and reproduction in any medium, provided the original author and source are credited.

The thermodynamic state of RCE can be judged by a change of binding affinity between regulator and enzyme and the potency of regulator in enzyme regulation. The state of CAS can be judged by a change of parameters of enzymatic reaction, such as maximum rate (Vm), km, and activation energy. The active or inactive formation of enzyme has been well defined in enzymology. The difference between active conformation and CAS has also been well defined [11].

The protein thermodynamic structure of enzyme regulator complex is shown in figure 1. 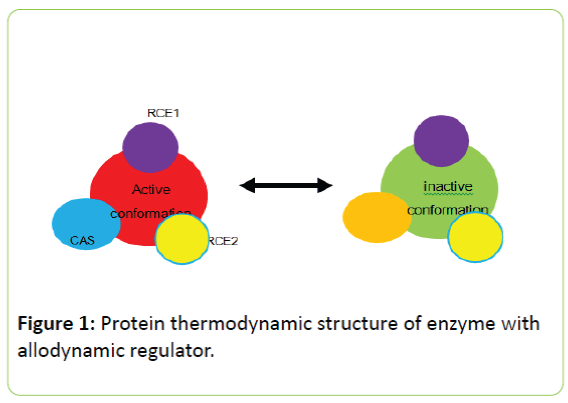 When binding to a regulator or respond to a stimulus of environment, the thermal state of RCE firstly changes. The change of RCE can then influence the thermal state and probability of active conformation of enzyme. The thermal change of ACE can further induce a change of conformational state at active site of enzyme. Thus, the thermal change at RCE can be transmitted into CAS. This processed is called reorganization of protein thermodynamic structure. According to our model, the allosteric regulation represents one specific fashion for allodynamic regulation.

The information transmission way of allodynamic regulation of an enzyme can be expressed as follows:

By applying principles of protein thermodynamic structure theory, following properties and criteria of the ideal allodynamic regulator of an enzyme could be obtained and it could be utilized to judge the nature of enzyme regulator.

Although there is indirect interaction between regulator binding conformation and substrate binding conformation, the binding affinity between enzyme and substrate is not influenced by regulator. Two underlying reason are: 1) enzyme substrate complex (or regulator enzyme complex) can show a large number of nearly isoenergetic conformations, energy involved in protein conformational change is rather small [12]; 2) any protein conformation shows independence in some degree [6]. Thus, the indirect interaction between RCE and ACS may not be expressed in binding ability between substrate and enzyme. Similar opinion in pharmacology is that the binding between receptor and agonist may be not influenced by regulator.

The nature of enzyme regulation is same for all substrates if an enzyme has many substrates. It is crucial evidence for this type of regulation. This property has not been studied experimentally. This property can be judged by many criteria: a) if a regulator shows inhibition to enzyme activity for one substrate, it will show inhibitory activity when different substrates of enzyme are used; b) if a regulator increases the km for one substrate of enzyme, it will increase the km of other substrate by same way; and etc.

Although noncompetitive inhibitor of enzymatic reaction was judged by different criterion in experimental science, within our model, they are ideal allodynamic regulator [11]. 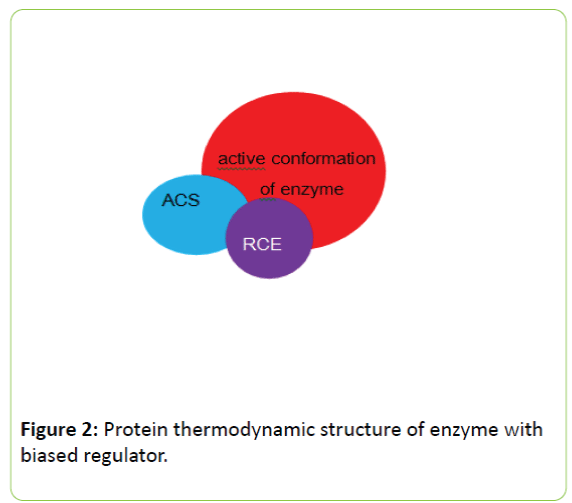 By applying principles of protein thermodynamic structure theory, properties of this type regulation can be deduced as follows:

The activation energy, maximum rate, and km of enzymatic reaction may be all changed.

The property of this type regulation is changeable from substrate to substrate. In other words, it is biased regulator [13].

A good example of this type of regulation is ribonucleotide reductase. For this enzyme, dATP, TTP, and dGTP act local modulator of enzyme activity [14].

Within this model, the competitive inhibition could be considered a special case for this type of enzyme regulation. It is possible to find a substance which acts competitive inhibitor for a substrate of enzymatic reaction, and it acts local modulator for another substrate.

The mechanisms above mentioned for enzyme regulator represent two typical cases. For a substance or drug, its effect on enzymatic reaction may be complex and could be carried out by two mechanisms at same time.

Finally, differences and consensus of two type regulator is summarized in Table 1.

KD: binding constant. UI: unnecessary to influence all these parameters. NR: there is no rule about it.

In conclusion, the enzyme regulation mechanism and working mechanism of drug can be fully explained by applying principles of protein thermodynamics and protein thermodynamic structure theory. In order to get comprehensive understanding of working mechanism of enzyme regulator and drug, the active conformation curve of enzymes along many variables should be measured experimentally in future.