Communicating With the Motor Cortex? Cortisol and Yawning As Possible Biomarkers for the Detection of Neurological Disease

Citation:Thompson SBN. Communicating with the Motor Cortex? Cortisol and Yawning as Possible Biomarkers for the Detection of Neurological Disease. J Neurol Neurosci. 2016, 7:S3.

Cortisol and yawning have been proposed as new potential biomarkers for the early detection of signs of neurological disease. Recent evidence from neuroscience has shown that there is communication between the motor cortex and more remote but vital centres such as the brain-stem and hypothalamus. Hormonal as well as neuronal links form the prosed network that influences and monitors the regulation of cortisol and the regulation of brain temperature governed by the hypothalamus. This evidence tends to support the prosed linkage between brain-stem, hypothalamus and motor cortex and lends support for the Thompson Cortisol Hypothesis which proposes threshold levels of cortisol elicit yawning for brain cooling, and parakinesia brachialis oscitans, the observed arm movement seen in brain-stem ischaemic stroke patients during involuntary yawning.

Cortisol is a naturally occurring hormone normally associated with immune protection and the regulation of stress [1-5]. Monitoring the levels of cortisol is often helpful in cases where high levels of stress is present such as adrenal insufficiency, or Cushing’s disease and in multiple sclerosis [3], where cortisol levels are thought to fluctuate with continued fatigue.

Yawning and cortisol has been associated with fatigue [6-8] and the Thompson Cortisol Hypothesis was proposed to account for how yawning is triggered by threshold levels of cortisol in order to promote brain cooling [8-10]. The combination of yawning and cortisol has also been proposed as a potential biomarker for the early detection of signs of neurological disease [11,12] with the first electromyogram representation of the yawn being reported [11,13] (Figures 1 and 2) [13]. 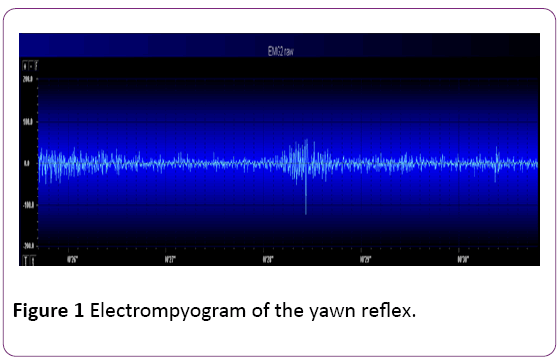 Figure 1: Electrompyogram of the yawn reflex. 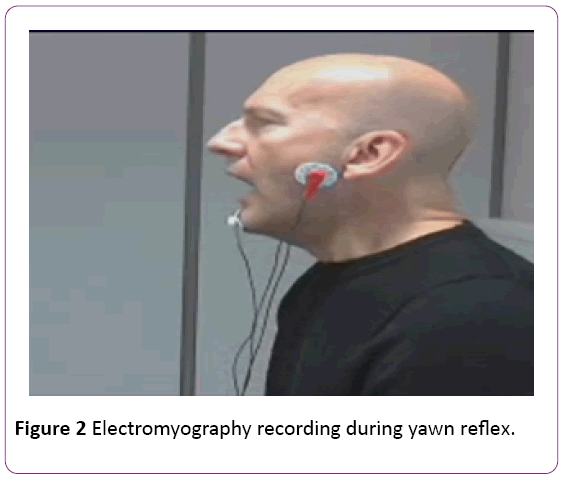 Researchers have examined potential biomarkers [14]; and in particular, yawning and cortisol have been proposed as biomarkers with further investigations of induced fatigue in healthy subjects showing that certain brain regions are activated during differing levels of cortisol [15]. This has provided support for the notion that yawning is triggered by cortisol fluctuations and affects the hypothalamus causing it to lower brain temperature [9].

Temperature regulation and circadian rhythm is the responsibility of the hypothalamus. Within the hypothalamuspituitary- adrenal (HPA) axis, the hypothalamus produces sufficient cortisol releasing hormone to elicit the release of adrenocortiocotropic hormone from the pituitary gland to protect against stress by activating the zona fasciculate in the adrenal glands [16] to secrete cortisol and adrenaline [12]. It is thought that this ultimately feeds back to the hypothalamus to lower brain temperature by triggering a yawn [9,10,15,17].

The curious observations of Sir Francis Walshe, the British Neurologist, in 1923 when he evidenced brain-stem ischaemic stroke patients raising their paralyzed arm when involuntarily yawning [18], gave rise to much examination of stroke patients [19] and the subsequent proposition that the brain-stem region may be intimately linked to the motor cortex because it produces this observed parakinesia brachialis oscitans [19,20].

Interestingly, the brain-stem comprises three main components, the pons, mid-brain, and medulla oblongata [21]. Brain-stem has several important functions including respiratory functioning and cardiac regulation and so is vital to survival. Researchers at the University of Adelaide [22] found that plasticity of human motor cortex is influenced by time of day, and circulating levels of cortisol. The Gammaaminobutyric acid (GABA)-beta receptors are affected (Figure 3) [23]; and particularly, these dependent intracortical inhibitory systems are also influenced by circulating cortisol levels [22].

Hasan and colleagues [24] have found that the motor cortex in mice has sophisticated receptors that help play an important role in learned motor responses. For example, during motor learning, synaptic efficacy between sensory and primary motor cortisol neurons is enhanced and possibly involves long-term potentiation and N-methyl-D-aspartate (NMDA)-specific glutamate receptor function. In humans, cortisol-specific receptor sites in the motor cortex may play a larger role in the communication between other brain regions, such as the brain-stem and hypothalamus.

Indeed, the communication between these sites may be less intimately linked by neural networks but rather by chemical (hormone) systems such as the HPA-axis. This would certainly provide a possible understanding of why stroke patients with brain-stem lesions are able to raise an affected arm when yawning.