Copyright: © 2017 Omar W, et al. This is an open-access article distributed under the terms of the Creative Commons Attribution License, which permits unrestricted use, distribution, and reproduction in any medium, provided the original author and source are credited.

Visit for more related articles at Archives of Medicine

Background: The presence of multi-vessel disease (MVD) has been reported to be associated with worse prognosis in patients with ST-segment elevation myocardial infarction (STEMI). Identification of optimal strategies for treating such patients is the subject of considerable interest and controversy.

Objective: The aim of our study is to compare the in-hospital and short-term prognosis for patients presenting with STEMI who were treated by two different modalities. The treatment varied between target vessel revascularization (TVR) and complete revascularization (CR) in patients with MVD undergoing primary percutaneous coronary intervention (p-PCI).

Methods: A total of 40 patients with recent STEMI and MVD undergoing p-PCI were randomized to CR (group A) or TVR (group B) during p-PCI and followed up for 6 months after hospital discharge. The patients were followed-up for incidence of major adverse cardiac events (MACE) (in-hospital, and at 1 and 6 months after discharge), contrast-induced nephropathy (CIN) and left ventricular ejection fraction (LVEF) improvement at 6 months.

Conclusion: The results of our study showed that CR is safe during p-PCI and is associated with better left ventricular EF at 6 months, especially in anterior myocardial infarction.

Acute myocardial infarction (AMI) has been reported to be the leading cause of death in patients hospitalized for cardiovascular disease in industrial countries [1,2]. Among the various treatment approaches, primary percutaneous coronary intervention (p-PCI) is considered as the treatment of choice for patients presenting with ST-segment elevation myocardial infarction (STEMI), when it can be performed expeditiously by an experienced team [3-5]. This strategy has been reported to be superior to thrombolytic therapy in improving morbidity and mortality [6-8]. The goal of this treatment approach is the restoration of flow within 90 minutes of presentation to a PCI-equipped centre [9,10].

The prevalence of multi-vessel disease (MVD) has been reported to be 40-65% in patients with AMI undergoing p-PCI [11-14]. This finding suggests that a significant proportion of these patients have an increased risk of death and adverse outcomes even after receiving reperfusion therapy through thrombolysis or p-PCI for infarct-related artery (IRA) [12]. However, the prognostic impact of revascularization for non-IRA in patients with MVD after p-PCI on clinical outcomes has not been fully investigated [12,15-18].

Identification of optimal strategies for treating these patients is the subject of considerable interest and controversy. Treatment strategies vary widely from an aggressive approach, which treats all significant lesions in the acute phase of p-PCI, to a conservative approach with p-PCI of only the IRA and subsequent medical therapy unless recurrent ischemia occurs. Other treatment strategies include staged procedures in which the IRA is treated acutely and other lesions are treated later during the hospital stay or within the first month following hospital discharge.

Aim of the Work

The aim of the study is to compare p-PCI for culprit vessel only vs complete revascularization (CR) for all coronary tree in patients presenting with STEMI and having multi-vessel disease. Points of interest were LVEF, contrast induced nephropathy in addition to MACE during hospital stay and six months follow up.

A total of 130 pts with acute STEMI, who were amenable to primary coronary intervention, were admitted to the critical care department at the Cairo University October 2009-July 2011. Of them, 55 pts had multi-vessel coronary artery disease, and 40 of the 55 pts met our inclusion criteria. The selected participants were blindly randomized into two groups after signing an informed consent; Group A: complete coronary revascularisation during p-PCI and Group B: culprit-only revascularisation during p-PCI.

Patients with acute STEMI and MVD were considered for our study. Those patients with cardiogenic shock, single vessel disease, left main disease (≥ 50% diameter stenosis), previous bypass surgery (CABG), severe valvular heart disease, in-stent restenosis and any contraindication to primary angioplasty were excluded from the study. All the patients were subjected to clinical examination and complete laboratory analysis including cardiac enzymes. Echocardiography was performed on admission, discharge and 6 months later.

All the patients received 150 mg aspirin, 600 mg clopidogrel, statins and heparin infusions. Other drugs such as IV nitroglycerin, ACE inhibitors, B-blockers, Ca-channel blockers, antiarrhythmics, vasopressor, IIb/IIIa antagonist and inotropes were given when indicated. The patients were subjected to coronary angiography and PCI. The follow-up visits were scheduled at 1 and 6 months. LVEF was assessed twice: first during hospital stay and the second at 6 months follow-up. Lesions were assessed by QCA by two operators and were classified as critical if >70% stenosis.

CIN was defined as an elevation of serum creatinine (Scr) of more than 25% or >0.5 mg/dl (44 μmol/l) from baseline within 48 h after excluding other factors that may cause nephropathy, such as nephrotoxins, hypotension, urinary obstruction or atheromatous emboli [19].

Data were collected and coded prior to analysis using the professional Statistical Package for Social Science (SPSS 12). All data were expressed as mean+standard deviation. The Student’s t-test (unpaired) was performed after checking the normality for all continuous data. Mann-Whitney U test was used when the value of SD was violated. The chi-square test was performed for all categorical data to test for the presence of an association. For small sample size, Fisher’s exact test was performed. Multivariate regression analysis was performed for predictors of LVEF. A P-value <0.05 was considered to be significant.

Baseline clinical and demographic data regarding age, sex, risk factors & previous history of IHD were found to be comparable in both groups (Table 1). 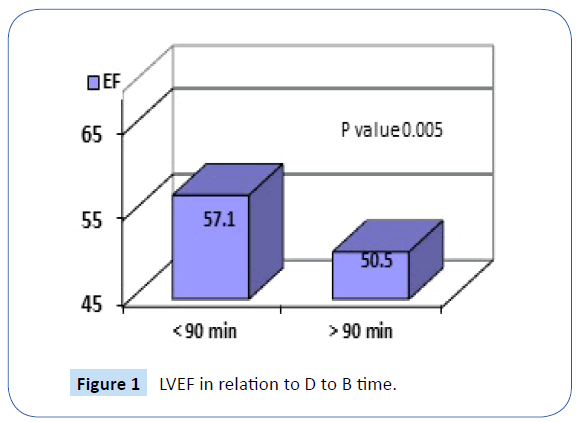 Figure 1: LVEF in relation to D to B time. 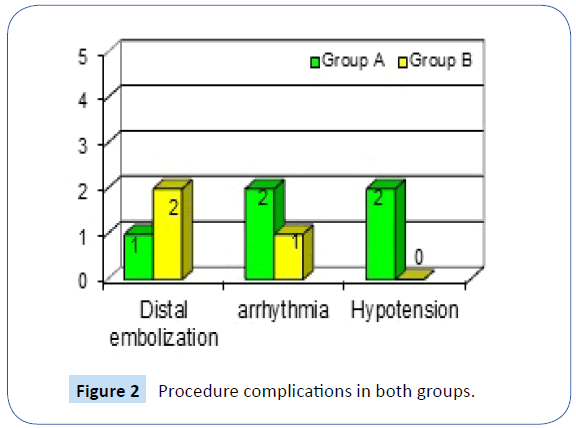 Figure 2: Procedure complications in both groups.

No MACE was observed in group A while one case of MACE (death) was found in group B (P=0.31). This patient had TIMI II flow after PCI, and the cause death was Ventricular Fibrillation (Figure 3). 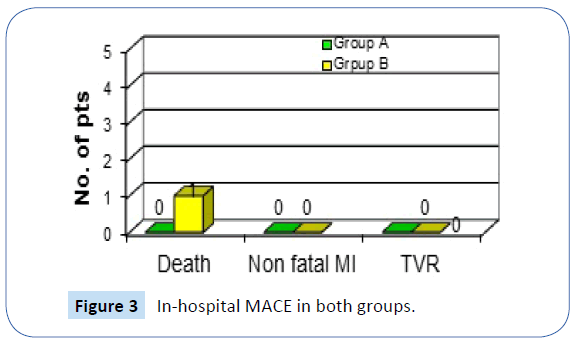 Figure 3: In-hospital MACE in both groups.

There was no incidence of major bleeding or site access complications in both groups. Only one patient with minor bleeding was observed in group A (P-value 0.31).

CIN was observed in two patients of group A and one patient of group B (P-value 0.54). Thus, the incidence of CIN was comparable between both groups, indicating no added risk to the patient with an aggressive strategy of CR (Figure 4). 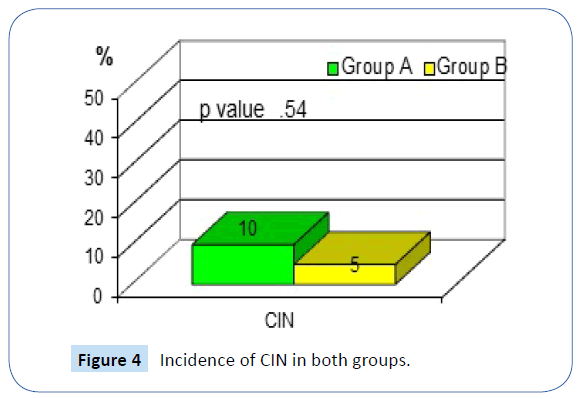 Figure 4: Incidence of CIN in both groups. 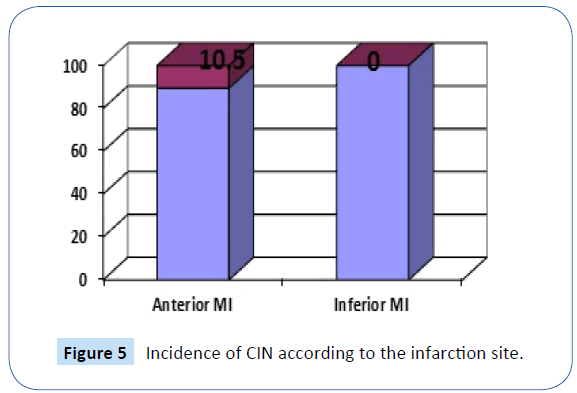 Figure 5: Incidence of CIN according to the infarction site.

MACE for 30 days (including in-hospital MACE)

There was no incidence of MACE in group A. However, in group B, there were two cases, one hospital death and the other nonfatal MI requiring reintervention in the same vessel territory. However, the analysis of the data for these patients showed that they stopped clopidogrel prematurely (P-value = 0.14).

MACE for 6 months and rehospitalisation

The incidence of MACE and rehospitalisation at 6 months were the same as at 1 month follow-up between both groups. Only one patient in group A needed reintervention. All patients in group B received intervention in the non-culprit vessels after 1 month from p-PCI. 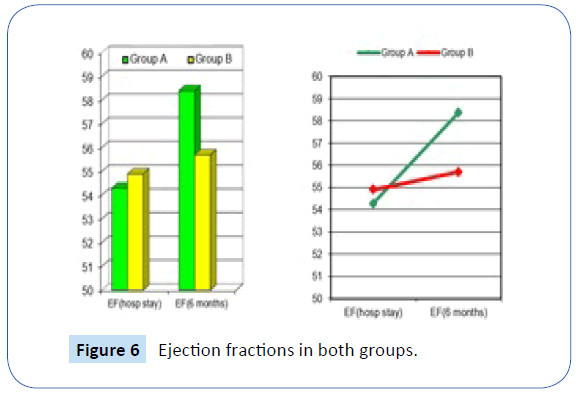 Figure 6: Ejection fractions in both groups. 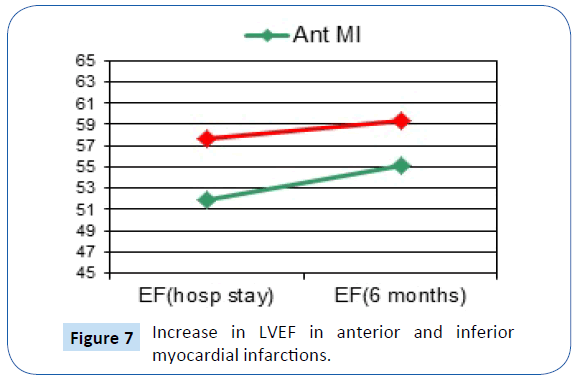 Figure 7: Increase in LVEF in anterior and inferior myocardial infarctions.

Table 3 Comparison between LVEF in both groups.

Table 4 Multivariate regression analysis for predictors of LVEF at 6 months.

The PRIMA trial compared the two therapeutic approaches: 1-complete versus 2-stage percutaneous revascularization in patients with STEMI and MVD in relationship to the recovery of left ventricular systolic function. The principle finding of the study is that in patients randomly assigned to 1-stage percutaneous revascularization, the left ventricular ejection fraction (LVEF) recovers more rapidly and more significantly in comparison to the standard 2-stage procedure.

The 1-stage complete PCI led to a significant improvement of LVEF in AMI patients with MVD after 30 days, with a trend towards further improvement at 6-month follow-up as compared to the 2-stage approach [20].

The influence of MVD on the recovery of LV function was assessed by Ottervanger et al. [21] in 600 patients with AMI treated with p-PCI. They showed that despite the regained flow in the IRA, the presence of MVD was correlated with a lack of a significant improvement of LVEF.

The recovery of left ventricular function after complete multivessel one-stage PCI in patients with acute STEMI was assessed by Andrzej et al. [15] in 48 patients (group A) and two-stage PCI in 44 patients (group B). In group A, the absolute LVEF increase after 30 days was significantly higher in comparison to group B (P-value <0.01). A similar trend was observed after 180-day follow-up, and the difference was borderline significant (P-value 0.052). A significantly higher percentage of patients in group A reached the primary endpoint (increase in LVEF > 5%) compared to group B (44.7% vs. 32.4%, P-value 0.028).

Subgroup analysis suggested benefit of patients with anterior MI over other ACS. There was a trend towards an increase in LVEF % in group A, especially in patients presenting with anterior MI.

A recent meta-analysis confirmed that MVD is commonly present among STEMI patients presenting for P-PCI and has a negative impact on 30-days mortality [22]. However, previous studies addressing the management of N-IRA lesions have produced conflicting results, as reflected in the 2013 American College of Cardiology Foundation/American Heart Association [23] and 2012 European Society of Cardiology guidelines (IIIC and IIb Class C, respectively). These recommendations were made on the basis of studies that differed in design and consisted of subgroups of randomized p-PCI trials or retrospective observational registries [24]. This suggested that in-hospital CR appeared to be associated with worse outcomes. The reason for a trend toward increased mortality with immediate complete PCI in the non-randomized retrospective registry studies is likely attributable to case selection.

One-stage revascularization is associated with higher contrast medium load and longer procedure time in the setting of the acute phase of STEMI, but no increased incidence of adverse events and complications were noted in long-term follow-up. Two-stage PCI is associated with additional vascular access, stress to the patient, and prolonged hospitalization that increased costs. The mean hospital stay was comparable in patients treated with 1-stage PCI.

Case selection bias cannot be completely excluded, but due to the very nature of MVD clinical trial in p-PCI setting, it is not possible to randomize patients before the results of the angiogram are known. Due to our limited resources, neither intravascular ultrasound nor FFR was used to assess lesion severity. This should be further studied in future. Lastly, future studies should use more number of patients on a multicentre basis.

The study has demonstrated that CR of angiographically significant N-IRA lesions patients with STEMI treated by p-PCI resulted in improved clinical outcomes compared with the treatment of culprit lesion only.