Copyright: © 2019 Jaba T, et al. This is an open-access article distributed under the terms of the Creative Commons Attribution License, which permits unrestricted use, distribution, and reproduction in any medium, provided the original author and source are credited.

Background: Senescent cells are one of the most toxic cells in the human and animal organism. When their amount reaches great quantity, it leads to the strong manifestation of aging signs. According to an explanation of the molecular genetic centriolar theory of aging during the division process cells’ generation reaches ultimate morphogenetic status. As a result, programmed cell death (apoptosis) must be activated or otherwise, cell transforms into the senescent cell.

Purpose: Senescent cells cause age-related pathologies. Theoretically, partial elimination of senescent cells must lead to increased life capacity. This hypothesis was confirmed on Ercc1 -/Δ mice. Periodic simultaneous administration of dasatinib and quercetin in Ercc1 -/Δ mice led to the extension of their healthspan, delaying agerelated symptoms and pathologies. We decided to test the senolytic effect of dasatinib and quercetin combination on human beings.

Study Design: With this purpose, the clinical trial was undertaken on 64 male volunteers over the age of 36. To put things into perspective our volunteers were classified into 4 groups with 16 people in each. D+Q group orally administered 50mg of dasatinib with 500 mg of quercetin once a day within 5 days.

Methods: To register and to assess changes stemmed from the drug compounds the whole trial was complemented with full medical screening and stair ascending test.

Results: As a result, 50 mg of dasatinib along with 500 mg of quercetin demonstrated obvious senolytic effect, it was justified by improved results of stair ascending test and tranquilized state of systolic blood pressure. Such dosage combination of these two compounds is highly probable to be harmless.

Conclusion: These results demonstrate the feasibility of senescent cells’ selective elimination on humans and the efficacy of senolytics for improving health and physical capacity.

It ’ s proven that senescent cells are the main source of intoxication for organism [1-3]. Their mechanism of origin is still uncertain up to nowadays. We consider their origin through the prism of molecular genetic centriolar theory of aging [4].

The absence of centrioles at the stage of preleptotene condensation of chromosomes [5] seems to evidence the relationship between the “ null ” morphogenetic status and centrioles.

Amount of generations that start from zygote are limited. Programmed cell death turns on in those cells that have the highest and last morphogenetic status (The Hayflick limit) [10].

Morphogenetic status (cell's division counter) structure is fixed (either inside or near) with centriole.

It is conceivable that the formation of cell division “counter” de novo inside the cell happens on the basis of the mitochondrion or/and nucleus DNA matrix.

Most probably “counter” structure consists of micro RNA or oligo protein stacked in one structure. As the cell divides, this structure replicates with new centriole.

These separated different molecules of micro RNA/oligo protein in daughter cells get inside cytoplasm, and then inside karyoplasm of new generation cell nucleus. It may invade and affect the structure of nuclear DNA. Gene group indicative of previous cell generation turns off and new gene group turns on.

When RNA molecules and protein in “counter” are expended and programmed cell death (apoptosis) doesn’t turn on, it leads to the generation of the senescent cell. Thus during the process of cell differentiation constantly come up senescent cells.

The aim of our experiment was to re-conduct the experiment, however this once on people. Since primarily cardiovascular dysfunction in humans is associated with senescent cells [12], we decided to constantly monitor cardiovascular function.

The experiment included middle-aged and elderly men between the ages of 36-60. The average age was 53,1 years. The majority of them led a sedentary lifestyle, others were slightly active, some were smokers, some moderately drank alcohol. The participants did not have any specific illnesses that potentially could affect the experiment. These 64 participants were equally divided into 4 different groups. Such as D+Q, D+P, Q+P, and P+P. D+Q group orally administered 50 mg dasatinib with 500 mg quercetin. D+P group orally administered dasatinib along with placebo. Q+P group took 500 mg quercetin with 50 mg placebo. P+P group orally administered two compounds of placebo with a dosage of 500 mg and 50 mg accordingly. All participants provided informed consent. The whole research was conducted in accordance with the Helsinki Declaration.

Dasatinib is an inhibitor of multiple tyrosine kinases, used for treating cancers [13], and is known to interfere with EFNBdependent suppression of apoptosis. Dasatinib (50 mg compound) was obtained from LC Laboratories.

All data were presented as mean ± standard deviation. The values between groups for the dependent variables were analyzed to determine if the distributions were normal using Kolmogorov-Smirnov (K-S) Normality test.

Comparison between pre- and post-exercise was performed through the Paired-Samples T-test procedure in order to examine the differences between tests. It was also used for comparing the differences for pre-test ME and EE and post-tests ME and EE. Significance level was set at α=0.05 and 0.01. The statistical package program was used to evaluate the results of the study.

A medical screening consisting of complete blood count, Creactive protein and creatinine blood test were performed on participants a day prior and 21 days after the administration of compounds. Complete blood count covered all basic parameters. Venous blood from participants was collected into anti-coagulant EDTA tubes and differential full blood counts were determined on a Beckman Coulter. C-reactive protein concentrations and creatinine blood test were determined on a Beckman auto-analyzer.

For the accurate assessment of senolytic effect of all compounds stair ascending test was done by participants a day prior to the start of the trial and 21 days after the end of the trial along with medical screening each time. SAT was performed at a randomly-selected block of flats. Participants were required to ascend 4 floors.

Number of steps per flight=12 steps

Participants were clearly acquainted with SAT requirements in advance. They needed to ascend at rapid, but even pace during the whole test and also to take only one step at a time.

They went through a standardized warm-up protocol that consisted of five minutes of stretching for the quadriceps, hamstrings and calf muscles.

Exercise attire was mandatory. Namely, shorts, t-shirts, and sports shoes. A five-minute rest interval was initiated between the standardized warm-up and the SAT.

Researchers from Mayo Clinic tested whether treating 24- month-old mice with D+Q would improve cardiac ejection fraction (the fraction of heart volume pumped during each heart contraction) and vascular responses to acetylcholine, nitroprusside, or U46619. They gave a single dose of the drugs and waited 5 days before assaying cardiac function. D and Q are cleared within 48 hours of the last dose.

Despite the fact that mice are relatively resistant to the development of age-related systolic dysfunction, treatment of 24-month-old mice with a single dose of D+Q significantly improved left ventricular ejection fraction and fractional shortening, effects that were mediated by reductions in endsystolic cardiac dimensions but not cardiac preload or alterations in cardiac mass.

Results of Complete Blood Count (CBC), C-reactive protein and creatinine blood test performed on participants practically did not show any significant alterations. First SAT results taken a day prior to the administration of compounds showed that the systolic and diastolic blood pressure results of all participants were on the same level with just minor differences. Presented Figures 1 and 2 diagrams demonstrate those results measured before Stair Ascending Test (SAT). 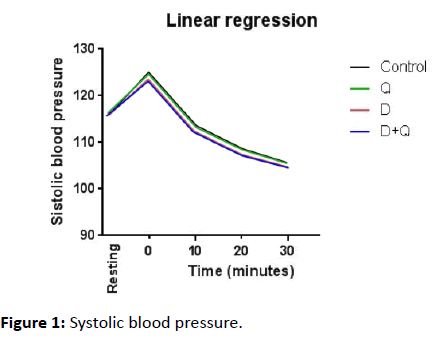 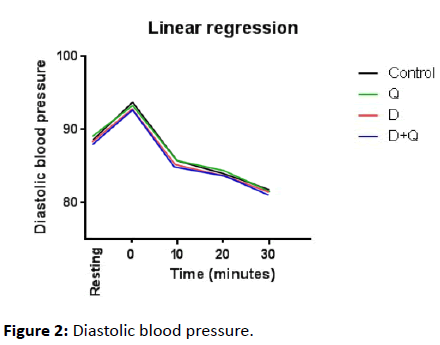 Second SAT taken on the 21st day, showcased clear reduction of systolic blood pressure in groups D+Q and just slight reduction in D+P in comparison with unchanged results in the rest of 2 groups that administered quercetin along with placebo and placebo along with placebo. Significant reduction of Systolic Blood Pressure (SBP) was seen starting at 20 minutes and 10 minutes post-exercise respectively in the D+Q group (p<0.05), versus the rest of the groups (Figures 3 and 4). 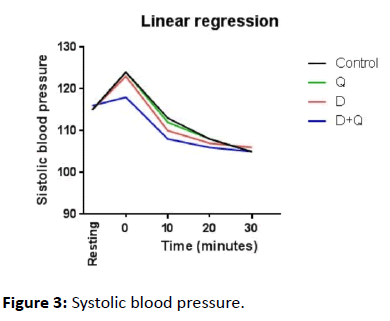 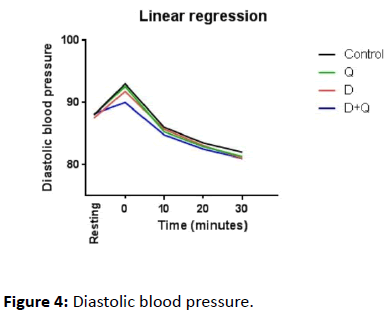 As for the diastolic blood pressure, it practically remained unaltered.

We expected a reduction of senescent cells’ amount in the organism. In our opinion, it might cause a decrease in daily intoxication of tissues, organs, and body as a whole. In the case of man it primarily might have an impact on the state of the cardiovascular system.

Results of SAT demonstrated that human body easily adjusts to strenuous activity and blood pressure promptly comes to its norm. Unfortunately, there is no enough research made on how the return of systolic pressure to the state of rest after exercise changes with age. In the other study [18] similar to ours, 14 IPF diseased patients were given dasatinib and quercetin in another dosage (D:100 mg/day, Q:1250 mg/day, three-days/week over three-weeks), in common with our trial they examined the effect of compounds with the help of strenuous activity. However, it consisted of such activities as 6-min walk distance, 4-m gait speed.

It has to be noted, this research also provides initial evidence that senolytics may alleviate physical dysfunction (in their case, not with practically healthy people, but with patients in IPF). Our and this trial warrant evaluation of D+Q in larger randomized controlled trials for senescence-related diseases. Scientists of the other trial reported 16 complications overall, one of which was severe, the rest was either mild or moderate cases. It is highly probable that IPF was not the cause of moderate and particularly more serious complications.

As for the trial conducted by us, we did not detect any complications. We attribute this to the fact that minimal (but sufficient) doses were selected. However, the fact that the participants of our experiment were practically healthy should also be taken into consideration.

Practically everybody from D+Q group noted the lightness in the joints the very next day after the first intake of D+Q. In this regard, It would be interesting to check the joints before and after in subsequent studies.

The fact that the senolytic effect has remained for so long is explained by the realization of partial elimination of ageing cells.

We incline to explain the insignificant improvement of D+P group (relative to D+Q combination) by senolytic effect of dasatinib and non-effect of placebo. The rest controlled Q+P and P+P groups did not show improved results after the SAT.

We expected some enhancement in Q+P group. However, it didn’t occur in contrast to D+P. Perhaps in the case of Q+P, there was a senolytic (small or large with respect to D+Q) effect. But we think that SAT does not detect it. It would be appreciated if the following studies take into account our mistake and make tests that could detect the senolytic effect in the Q+P groups. We believe that for the study of such important drugs as senolytics, ultimate biochemical standards should be included, at least complete mass-spectrometric analysis of all blood substances.

First group participants who orally administered once a day after meal 50 mg of dasatinib and 500 mg of quercetin during five days demonstrated the remarkably outstanding improvement of physical endurance. They showcased obvious senolytic effect and their such simultaneous usage in the very near future most likely to be harmless. Senescent cells obviously are involved in the ageing process. It’s becoming more clear why people normally age at the same rate. The intensity of aging and the amount of senescent cell are directly related. The more division of cells, the more senescent cells.

• Results obtained from P+P group showed no significant alteration too

• Complete blood count, C-reactive protein concentrations and creatinine blood test was unchanged before and after compound administration in all 4 groups

We wish to confirm that there are no known conflicts of interest associated with this publication and there has been no significant financial support for this work that could have influenced its outcome.