Diagnostic Biomarkers: Exploring the Potential of Cortisol and Yawning in the Detection of Neurological Disease Processes

Yawning continues to pose as a scientist’s conundrum. Evidence is presented of yawning and contagious yawning in a number of different neurological disorders. Explanations are discussed in the context of disparate neurological disorders together with proposals for how these findings may be linked. Thus, greater understanding of yawning and of neurological disorders may be achieved by exploring common neuro-chemical pathways and the involvement of neurotransmitters that are implicated in these different disorders. Finally, contagious yawning is discussed in the context of the susceptibility of persons and the similarity this presents with our understanding of the mechanisms involved in hypnosis.

The term ‘biological marker’ or ‘biomarker’ dates back to 1980 (Aronson, 2005) and is defined as an entity that measures a particular biological state, objectively measured and evaluated as an indicator of normal biological processes, pathogenic processes or pharmacological responses to a therapeutic intervention [1].

Historically, a large number of people are selected from a given disease category to identify the biomarker. Following this ‘proof of concept’, experimental validation takes place using various methods, for example, histology, and then followed by analytical validation exploring several parameters: sensitivity; specificity; robustness; accuracy; and reproducibility [2].

Cortisol is a naturally occurring hormone that is considered important for immune protection and stress regulation [3-5] (Figure 1). Measuring the levels of cortisol is useful for monitoring a number of different medical conditions including cases where high levels of stress are known such as adrenal insufficiency, or Cushing’s disease, and for certain neurological diseases, including multiple sclerosis [6]. 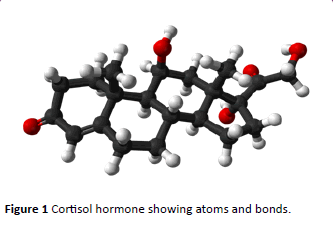 The link between assay levels obtained via invasive blood collection and non-invasive, saliva sampling is directly proportional to the serum unbound cortisol concentration both in normal women and men [7].

A greater level of neuromuscular fatigue and larger responses in serum hormone concentrations has been evidenced after hypertrophic variable resistance loadings [8]. This has led to identifying markers of fatigue [9]; in particular, following post-match professional rugby [10] and also in young elite athletes [11], and in elite tennis players [12].

Tiredness due to physical exercise and even mental concentration on tasks is often referred to as ‘fatigue’ and is sometimes associated with yawning. The Thompson Cortisol Hypothesis [13] is the first evidence-based report that links cortisol, with yawning, and demonstrates that cortisol rises when we yawn. A common symptom of multiple sclerosis (MS) is fatigue [14] which is also associated with excessive yawning and a rise in brain temperature, governed by the hypothalamus [15].

Temperature regulation and circadian rhythm is the responsibility of the hypothalamus which is intimately linked to two other body structures, the pituitary gland and the adrenal glands which secrete adrenaline. Typically, the hypothalamus-pituitary-adrenal (HPA) axis produces sufficient hormones to protect against stress and ensures the body is ready for physical activity.

Produced by the zona fasciculate of the adrenal cortex [16], the rise in cortisol level possibly triggers the response to yawn and in turn, lowers the temperature of the brain [17-19].

The author’s team at Bournemouth University and the French teams at Amiens University Hospital and the University of Picardy Jules Verne [20] tested the theory that intrinsic and phasic fatigue may be associated with cortisol levels and that yawning, known to be associated with elevated cortisol levels [6], may occur in association with fatigue. This could explain why people with multiple sclerosis yawn when they are frequently fatigued.

The role of cortisol in mental and motor tasks together with the recruitment of brain regions during these tasks has been explored in a recent fMRI study [20]. In healthy participants, cortisol levels were found to be higher and had greater reduction in levels during mental versus motor tasks. These findings also showed that recruitment of brain-stem and hypothalamus regions, which are considered to be important in cortisol activity, were affected to differing extents.

These encouraging and intriguing results are yet to be seen in people with immune-suppression, neurological disease, and cortisol insufficiency. However, if cortisol is implicated in these brain regions, this tends to lend support for the Thompson Cortisol Hypothesis. Furthermore, it suggests that brain region recruitment is likely to be dependent upon cortisol levels as well as perception of stress in a task. It is suggested that the mental tasks in this study were perceived as being more stressful than the physical tasks but demanded higher cortisol levels to promote wider spread brain region activity.

Cortisol, together with fatigue-related yawning may provide scientists and neurologists with a new biomarker of underlying neurological disease. As with any potential and new biomarkers, the systematic evaluation of healthy and nonhealthy participants needs to be carried out but it does present us with considerable new possibilities for the detection, and perhaps early intervention of multiple sclerosis in the near future.