Aim: Patients with metastatic prostate cancer invariably progress after primary androgen ablation and develop castration-resistant disease after a median time of 18-24 months. We report our early experience with docetaxel based chemotherapy in patients with mCRPC.

Methods: Patients with rising serum Prostate-specific antigen, increasing extent of disease on bone scans and physical findings. All eligible patients with no previous treatment with any cytotoxic drug and having a good ≥80 Karnofsky performance status were included into the study.

Results: 85 patients with metastatic prostate cancer presented with progressive disease following ADT. 67 (78.82%) patients with a mean age of 67.05 ± 2.11 accepted further treatment with docetaxel based chemotherapy, whereas the remaining 18 (21.18%) patients with mean age of 68.0 ± 4.47 years did not undergo further treatment. The overall survival was 32.61 ± 6.09 months in patients receiving docetaxel based chemotherapy as compared to 12.83 ± 2.40 months in patients in the no treatment group. The Serum PSA values at 3 and 9 months after initiation of treatment showed a downward trend in all the three risk groups receiving docetaxel.

Conclusions: In our study the overall survival was 32.61 ± 6.09 months in patients receiving docetaxel. Serum PSA decline rates at least 50% from baseline was seen in 34.32% of patients at 3 months on docetaxel treatment. Docetaxel was also effective in pain reduction, decline in serum PSA levels and improvement in health related quality of life. Our study demonstrates significant response rates to docetaxel chemotherapy but that a considerable number of patients had treatment-related complications. This highlights the need for careful patient selection and optimization of chemotherapy dosing.

Prostate cancer is a heterogeneous disease and contains cells that are androgen-sensitive and those that are androgenresistant [4]. It is hypothesized that the androgen-resistant cells are eventually responsible for the failure of androgen deprivation therapy. CRPC is known to progress despite castrate levels of testosterone as a result of androgen receptor amplification [5,6]. It has also been suggested that reactivation of previously down-regulated androgen receptors could possibly be the mechanism of CRPC [7]. Till a decade ago there was no single agent or combination of agents that improved survival once CRPC developed. In 2004, two large randomized clinical trials showed a survival advantage of docetaxel based chemotherapy over mitoxantrone in patients with metastatic CRPC [8]. We report our early experience with docetaxel based chemotherapy in patients with metastatic CRPC.

During the study period July 2007 to March 2016 patients with metastatic prostate cancer presenting to the Urological services of the Hospital formed the study group following the best ethics criteria according to the University/Institutional ethical committee.

All eligible patients received docetaxel 75 mg/m2 every three weeks and oral prednisone 5 mg twice daily. Treatment was continued until disease progression, occurrence of unacceptable adverse effects or a minimum of 10 cycles of docetaxel. The primary endpoint was overall survival and the secondary endpoints were pain reduction, serum PSA decline rates of at-least 50% from baseline, quality of life and objective tumor response. The decline in serum PSA levels and overall survival was analyzed in relation to four independent baseline risk factors (i.e. Pain, visceral metastases, anemia and bone scan progression) which were further classified into group 1 (zero to one risk factor), group 2 (two risk factors) and group 3 (three to four risk factors). Pain was assessed using visual analogue scale (VAS) and the need for analgesia. The Functional Assessment of Cancer Therapy-Prostate (FACT-P) questionnaire was used to measure the health related quality of life in all these patients. Individual patient data were tabulated and summarized using descriptive statistics. Overall survival was calculated using the Kaplan-Meier method. All statistics were calculated using SPSS software package version 20.0.

During the study period 85 patients with metastatic prostate cancer presented with progressive disease following ADT. Progressive disease was diagnosed by rising serum PSA levels in 70 (82.35%) patients and on increasing extent of disease on bone scans and physical examination in the remaining 15 (17.64%) patients. The mean duration of time following ADT was 33.5 ± 1.94 months. Following detailed examination and counseling 67 (78.82%) patients accepted further treatment with docetaxel based chemotherapy. The remaining 18 (21.18%) patients did not undergo further treatment because of various reasons including unaffordability and inability to continue further treatment. Fifteen (17.64%) of these 85 patients had undergone radical prostatectomy in the past and the remaining were diagnosed with metastatic disease at presentation.

The mean age, pretreatment serum PSA values, percentage of patients with similar risk factors were similar in both these groups of patients (Table 1). The Karnofsky performance status (KPS) of the patients in both the groups was similar. The serum PSA values at 3 and 9 months after initiation of treatment showed a downward trend in all the three risk groups receiving docetaxel (Table 2 and Figure 1). Serum PSA decline rates at least 50% from baseline was seen in 34.32% of patients at 3 months on docetaxel treatment. VAS scores and the need for analgesia significantly decreased following the initiation of docetaxel based chemotherapy.

Table 1: Pre-treatment parameters of the patients with mCRPC. 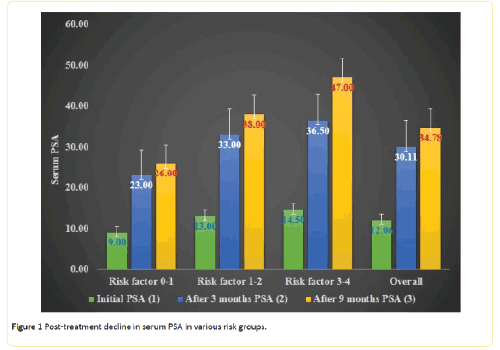 The most common adverse reactions seen in the docetaxel group were anemia, febrile neutropenia, neuropathy, dyspnea, anorexia, fluid retention, asthenia, mucositis, alopecia and myalgia. In 20 (29.85%) patients on docetaxel, the chemotherapy cycles needed to be interrupted due to neutropenia and asthenia. However all the patients completed 10 cycles of docetaxel based chemotherapy. During the therapy 15 (22.38%) patients on docetaxel therapy needed blood transfusions.

The overall survival was 32.61 ± 6.09 months (95% confidence interval) in patients receiving docetaxel based chemotherapy as compared to 12.83 ± 2.40 months (95% Confidence Interval) in patients in the no treatment group. The overall survival (OS) was better in patients with least risk factors (Table 3 and Figure 2). During the course of treatment 13 patients in the docetaxel group needed to be treated with bone targeted radioisotope therapy using phosphorous-32 for relief of pain. The pain response rate in this group was 76.92%, PSA response was seen in 84.61% and OS was 29 months. 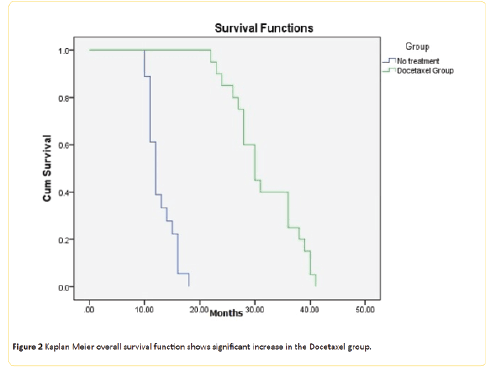 FACT-P scores showed marked improvement in 43.28% of patients following completion of chemotherapy and was significantly higher than compared to patients not receiving any treatment (P<0.0001). The greatest benefit in the docetaxel group was in the subscale representing prostate specific concerns (including weight loss, appetite, pain, physical comfort, and bowel and genitourinary function).

About 10-20% of men with prostate cancer present with metastatic disease, and in many others, metastases develop despite treatment with surgery or radiotherapy. In about 80 percent of men, primary androgen ablation leads to symptomatic improvement and a reduction in serum levels of prostate-specific antigen (PSA), but in all patients the disease eventually becomes refractory to hormone treatment after a median time of 18-24 months [3]. Castration-resistant prostate cancer is defined by disease progression despite androgen depletion therapy and may present as either a continuous rise in serum prostate-specific antigen levels, the progression of preexisting disease, and/or the appearance of new metastases.

In our study, 78.82% of very elderly (age ≥80 years) patients were able to complete planned treatment; however, a considerable proportion required dose alterations, highlighting the difficulties in determining optimal dosing in patients of advanced age. Similar findings have been reported in a retrospective series of 159 Japanese patients aged ≥75 years who received docetaxel in the community setting, in which 87% of patients required dose modifications [9]. Although secondary hormonal manipulations (e.g. corticosteroids, estrogens and ketoconazole) can benefit a subset of men with metastatic castrate-resistant prostate cancer (mCRPC), this benefit is usually short lived and until recently there was no evidence that secondary hormonal therapies could improve overall survival (OS) [10]. The options then include symptomatic care with narcotic analgesics, radiotherapy to dominant sites of bone pain, treatment with bone-seeking isotopes such as strontium-89, and cytotoxic chemotherapy [10,11].

Docetaxel and prednisone in combination are currently considered the standard of care for men with CRPC with detectable metastatic disease. Docetaxel is a taxane drug that induces polymerization of microtubules and phosphorylation of bcl-2 protein. Tannock et al. [12] randomized 1006 patients to one of three treatment arms: docetaxel (75 mg/m2 intravenously every 3 weeks), docetaxel (30 mg/m2 5 times weekly for 5 of 6 weeks), or control therapy with mitoxantrone. The patients in our study also received oral prednisone 5 mg daily twice. Thus improved survival was observed with docetaxel (every 3 weeks) compared with mitoxantrone-prednisone median survival, 18.9 vs. 16.5 months; hazard ratio [HR]=0.76 (95% confidence interval (CI), 0.62-0.94), two-sided p=0.009). No overall survival benefit was observed with docetaxel given on a weekly schedule (HR=0.91, (95% CI, 0.75-1.11), two-sided p=0.36). Similar results were reported by Petrylak et al. [12] study on 666 eligible patients randomized to docetaxel and estramustine (EMP) or mitoxantrone- prednisone. In addition to dexamethasone premedication, patients in the docetaxel arm also received warfarin and/or acetylsalicylic acid (ASA) as thrombosis prophylaxis during the course of the trial.

However, as of today there are no tools to predict the benefit of chemotherapy in an individual patient with mCRPC. Further, In a post docetaxel setting, the number of progression factors (PSA, pain, and tumor size), duration of therapy and whether progression occurred during or after the treatment with docetaxel independently predicted post-progression survival in men with mCRPC [16]. These predictors of survival may be useful for prognostication as well as for stratification in and interpretation of clinical trials and sample size planning. Chemotherapy can reduce serum PSA levels in patients with mCRPC and known to relieve pain in some patients, but tolerability is of concern, particularly since most patients are elderly and many have other medical problems. Both the TAX 327 and SWOG 99-16 studies have shown improved survival for patients receiving 3 weekly docetaxel over mitoxantrone, with acceptable toxicity rates. In TAX 327 trial, it was noted that patients in the docetaxel arm were more likely to have at least one serious adverse event (26% vs. 20%) than the mitoxantrone arm. In SWOG 99-16 trial, 16% of the patients in the docetaxel group and 10% in the mitoxantrone group were withdrawn from the study as a result of adverse events. Grade 3 and 4 febrile neutropenia, cardiovascular events, and neurologic events were significantly higher in the docetaxel group [12,13]. In our study too over 59.70% of the patients on docetaxel therapy had minor side effects, 29.85% patients needed interruption of the therapy due to neutropenia and severe asthenia. However all the patients completed 10 cycles of docetaxel based chemotherapy and 22.38% of patients needed blood transfusions. Several docetaxel combinations have been evaluated in phase 2 studies for mCRPC, including combinations with tyrosine kinase inhibitors, angiogenesis agents and immunologic agents [17].

In conclusion, Docetaxel remains the mainstay chemotherapeutic option in the management of mCRPC. The selected fit elderly patients appear to tolerate docetaxel and develop clinical benefit from treatment, but optimal dosing remains unclear, as pharmacokinetic changes with aging could potentially alter drug exposure and metabolism. Novel hormonal agents such as abiraterone and enzalutamide are striking substitutes in elderly patients due to lower rates of myelosuppression, though optimal treatment sequencing is not yet known. Comprehensive geriatric evaluation is likely to be helpful in determining patients at risk of increased toxicity, but is time-consuming and challenging to implement in a busy oncology practice. However, our study demonstrates significant response rates to docetaxel chemotherapy but that a considerable number of patients had treatment-related complications. This highlights the need for careful patient selection and optimization of chemotherapy dosing.