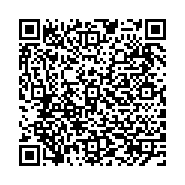 Dysphagia in Multiple System Atrophy of Cerebellar and Parkinsonian Types

Objective: This study aimed to examine the relationship between dysphagia and activities of daily living (ADL) in patients with multiple system atrophy (MSA), and to characterize dysphagia in patients with the cerebellar (MSA-C) and parkinsonian(MSA-P) types.

Methods: Sixty-one MSA patients (25 males, 36 females; 40 MSA-C, 21 MSA-P; mean age, 66.3 ± 11.0) were recruited. ADL was assessed on the Barthel index. They underwent tongue pressure measurements and videofluoroscopy (VF) by swallowing barium gelatin jelly. We measured the range of tongue root and mandibular movements during oropharyngeal transit time and used the functional dysphagia scale to rate the oral and pharyngeal stages with the VF images.

Conclusion: These results suggest a correlation between the degree of dysphagia and deterioration in ADL in MSA patients. MSA-P patients tended to experience problems with propelling a bolus through the oropharynx, whereas MSA-C patients incompletely form a bolus in the oral phase.

Dysphagia, which is the most frequent complication of multiple system atrophy (MSA), is observed a short time after disease onset [1]. Evaluations and the appropriate treatment of patients suffering from dysphagia may prevent or at least delay other complications, such as aspiration pneumonia, and thereby improve their quality of life and increase survival time. A study by Higo et al. implied that the swallowing function in MSA patients may be more influenced by Parkinsonism than by cerebellar dysfunction and that Parkinsonism mainly affects the oral phase of swallowing [2]. They suggested that dysphagia in patients with MSA with predominant Parkinsonism (MSA-P) is caused by Parkinsonism, whereas in patients with MSA with predominant cerebellar ataxia (MSAC), the progression of the cerebellar dysfunction and overlapping Parkinsonism worsens the tongue movements. However, there are few studies that have evaluated dysphagia in patients with MSA and compared patients with the two types, MSA-C and MSA-P.

A previous study has shown that the time from the initial symptom to the appearance of other symptoms, indicating the evolution to MSA, is strongly related to the deterioration of activities of daily living (ADL) and the worsening of survival [3]. However, the relationship between swallowing dysfunction and ADL deterioration is not yet clear. Clarifying the correlation between dysphagia and ADL, and the potential differences between patients with MSA-C and MSA-P could provide valuable clues for effective treatments. Some previous studies tried to clarify the difference in various characteristics between MSA-C and MSA-P [4,5], but there were few studies to make comparison of swallowing function between the two subtypes. This study aimed to demonstrate the relationship between the degree of dysphagia and deterioration in ADL in patients with MSA by comparing patients with MSA-C and MSA-P.

A handy probe was used in the tongue pressure measurement system (JMS Co. Ltd, Hiroshima, Japan) [8]. The probe was assembled with a small balloon and pressurized with air at 19.6 kPa. Participants were asked to compress the balloon onto their palate for approximately 7 s using the maximum voluntary effort of their tongue. The increase in the inner pressure of the balloon was measured as the tongue pressure. These tests were conducted thrice in a row and mean values were obtained.

The swallowing function was evaluated by a modified barium swallow procedure and videofluoroscopy (VF) imaging [9]. It was recorded through lateral projection onto a DVD recorder (DIGA; Panasonic Corporation, Osaka, Japan) running at 30 frames/s. Each participant swallowed 5 mL each of barium water and barium gelatinous jelly while in the lateral position and was required to repeatedly swallow until all bolus pass through the pharynx. The recordings of swallowing barium water and barium gelatinous jelly were analyzed frame-by-frame and scored on the basis of the VF dysphagia scale with a sum of 100 (Table 1) [10]. We measured the time from start of masticating gelatinous jelly until passage of the jelly tip through the esophageal entrance as oropharyngeal transit time and studied the tongue root and mandible movements during the oropharyngeal transit time.

The measurements of bolus transit and the movements of the tongue root and mandible were completed by analyzing the recordings of the swallow trials frame-by-frame or in slow motion using movement analysis software in two dimensions (Dipp-Motion Pro, Ditect Corporation, Tokyo, Japan).

To evaluate mandibular movement, the movement of the most inferior point of the mandible was measured on the Yaxis, which was based on two optional points on the cervical vertebrae (Figure 1). To evaluate tongue root movement, the movement of the point where the tongue line and the mandible line intersected was calculated on the X-axis, which was vertically directed toward the Y-axis. The values of the evaluation were divided by the values of the oropharyngeal transit time, which was taken as a measure of the speed of the tongue root and mandibular movements [11]. 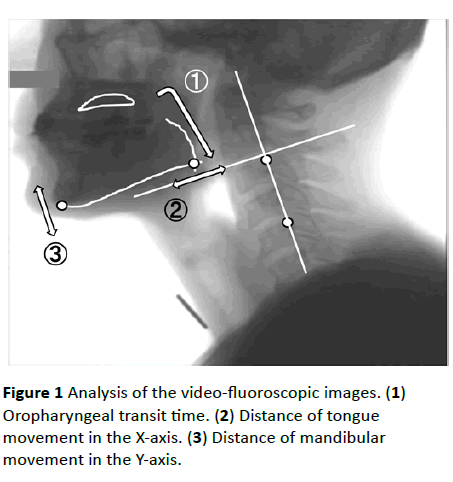 The Mann–Whitney U tests were used to compare the data sets of the two groups.

Statistical data were analyzed with the Statistical Package for the Social Sciences (SPSS 13.0 J) for Windows (IBM Corporation, Armonk, NY, USA), and p values less than 0.05 were considered significant. 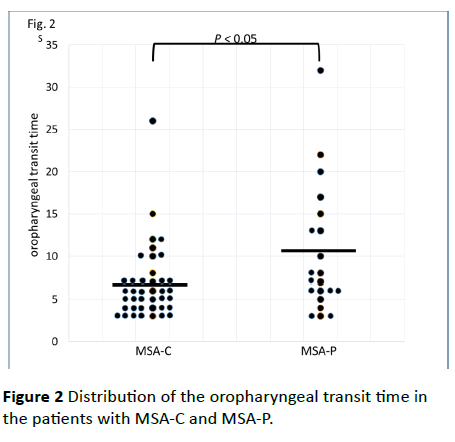 Figure 2 Distribution of the oropharyngeal transit time in the patients with MSA-C and MSA-P. 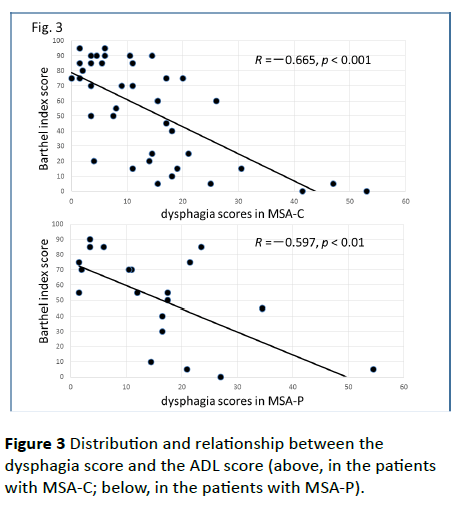 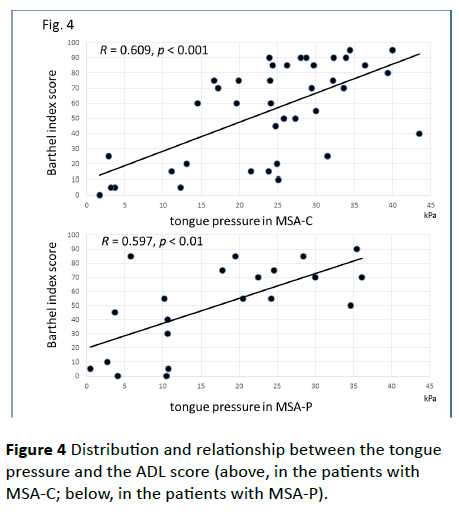 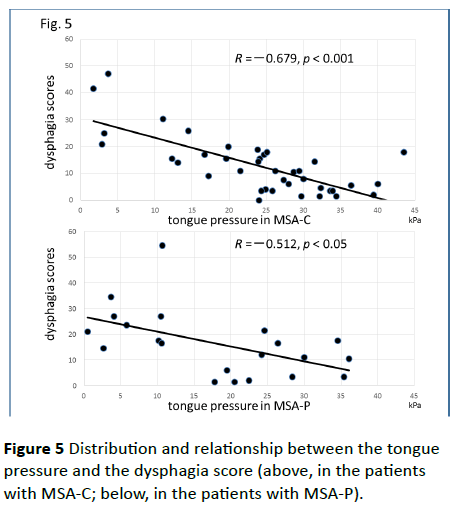 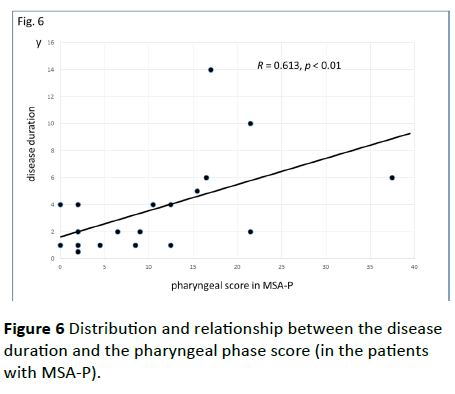 Figure 6 Distribution and relationship between the disease duration and the pharyngeal phase score (in the patients with MSA-P). 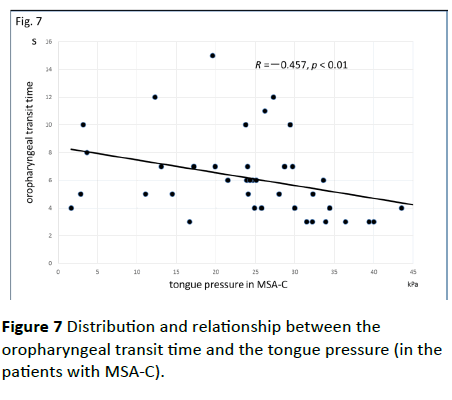 Figure 7 Distribution and relationship between the oropharyngeal transit time and the tongue pressure (in the patients with MSA-C). 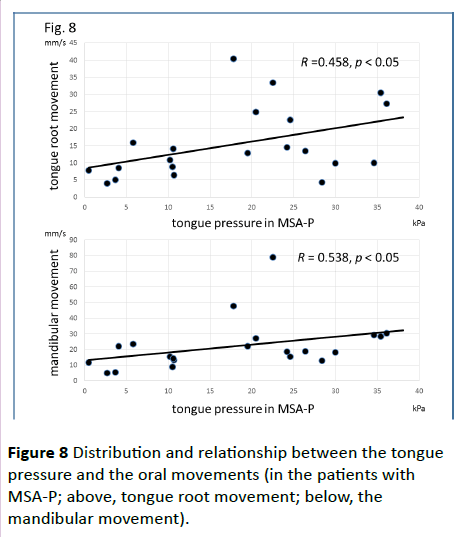 Figure 8 Distribution and relationship between the tongue pressure and the oral movements (in the patients with MSA-P; above, tongue root movement; below, the mandibular movement).

Watanabe et al. have suggested that the time from the initial symptom to the appearance of other symptoms, which indicates the evolution to MSA, is strongly related to the deterioration of ADL and a worsening of survival [3,4]. They assessed three activities of ADL milestones (aid-requiring walking, being wheelchair-bound, and being bedridden), and the time of onset of each of those states and of death in order to evaluate disease progression. A prospective European cohort study has reported that the median survival time from symptom onset was 9.8 years and patients with MSA-P were predicted to have a shorter survival [13]. However, according to the results of the study of Watanabe et al. patients with MSA-P showed more rapid functional deterioration than patients with MSA-C, but they had a similar survival time as patients with MSA-C [3]. Patients with MSA-P had more rapid functional deterioration than patients with MSA-C did. Patients with MSA-P had an accelerated risk of requiring a walking aid and a wheelchair, but the time until confinement to a bedridden state and survival was no worse. They suggested that Parkinsonism affects the motor aspects of ADL more so than cerebellar dysfunction [3]. In our MSA patients, the ADL score was significantly correlated with the dysphagia score, as well as with the tongue pressure. The disease duration was also correlated with the dysphagia score, especially with the pharyngeal phase score of MSA-P. These findings may support the relevance between the ADL deterioration and the survival time because dysphagia can have a significant impact on MSA patient’s lives.

In our MSA-P patients, the prolonged oropharyngeal transit time or the significant correlation between the movements in the oral phase and the tongue pressure may be caused by Parkinsonism, bradykinesia or hypokinesia. Alfonsi et al. reported prolongation of swallowing reaction time and reduction in duration of EMG activity of suprahyoid/submental muscles in MSA-P patients which may be explained by bradyhypokinetic mechanisms of oral swallowing [14]. Their study may be accorded with our results which suggested the impact of Parkinsonism in MSA-P on swallowing, especially in oral phase. However, MSA progression seems to influence on pharyngeal phase because of a significant correlation between the disease duration and the pharyngeal phase score in our results.

The severity of disease has been shown to be significantly correlated with a history of aspiration pneumonia. Incomplete relaxation of the upper esophageal sphincter was seen in 23.1% of patients with MSA [15]. Higo et al. have indicated that bolus transportation from the oral cavity to the pharynx is already disturbed in patients in the early stage of MSA-C [2]. The results of their study showed that 50% of the patients with MSA-C in the early stage (1−3 years following disease onset) and more than 85% in the late stage (>7 years following disease onset) suffered from delayed bolus transportation in the oral phase. It was suggested that the progression of cerebellar dysfunction and overlapping Parkinsonism worsened tongue movements [16]. In Parkinson’s disease, impaired tongue movement that is induced by Parkinsonism is the most common cause of prolonged bolus transportation [11]. The longer oropharyngeal transit time in patients with MSA-P that was observed in this study supported the view that patients with MSA-P suffer from dysphagia, which was mainly caused by Parkinsonism.

However, it is unclear whether or not cerebellar dysfunction influences swallowing function in patients with MSA-C. Although patients with MSA-C did not show a significant reduction in tongue pressure and a prolongation of oropharyngeal transit time, their oral phase scores deteriorated in direct proportion with the ADL scores. The lost points of bolus formation, mastication, or premature bolus loss in the oral phase scale in many patients with MSA-C suggest the incoordination of tongue and mandibular movements. To objectify the incoordination, further investigation is needed.

This study has some limitations which have to be pointed out. Firstly, we actually analyzed various viscosity and amount of liquids and jelly in the VF study, and ultimately adopted 5 mL each of barium water and barium gelatinous jelly by considering safeness for patients and detestability of differences between the MSA-C and MSA-P groups. Secondly, we investigated tongue pressure for some patients using both the Iowa Oral Performance Instrument [21] and the JMS tongue pressure measurement system and confirmed a significant correlation between the two systems. The both systems are possible options to assess swallowing function for MSA patients. Thirdly, a prospective European cohort study confirmed that MSA-P was more common [22], but Japanese people have higher prevalence of MSA-C than that of MSA-P [3]. The difference in sample size in this study is thought to be due to difference in prevalence. Although correction of sample size discrepancy between the two groups or larger sample size may provide a significant difference in tongue pressure, the difference in sample size is thought to have little effect on the results. Lastly, assessing dysphagia due to cerebellar dysfunction is more difficult than assessing dysphagia caused by Parkinsonism based on bradykinesia or hypokinesia, thus we must find a more accurate factor that predicts oral and pharyngeal swallowing movement.

We are grateful for the support of this work by the Japan Society for the Promotion of Science and Grants-in-aid for Scientific Research (C25463276).

We declare that we have no conflicts of interest.