Economic and Employment Issues in Patients with Dystonia: A Self-report Questionnaire Survey

Background: Dystonia is a condition that can affect quality of life and lead to employment and financial difficulties. We evaluated the adverse effects of dystonia on daily life and the cost involved in treatment.

Methods and findings: We conducted a postal mail questionnaire survey of 226 patients with various types of dystonia who were members of the Dystonia Friends Association, a Japanese nonprofit organization. Many individuals suffered economic and employment problems (30%) and pain (21%) because of dystonia. They urged that social security and the medical system be improved (16%).

Conclusions: Patients reported regularly experiencing inconvenience in daily life for economic, employment, and pain reasons. Improving the quality of life of patients with dystonia by reducing these burdens is a key aspect in its clinical management.

Patients with dystonia have a reduced quality of life and experience financial problems in their daily activities [1]. Botulinum toxin, oral medication, acupuncture, and surgery (including deep-brain stimulation) are the treatment options [2]. Improving the quality of life of patients with dystonia by reducing these treatment burdens is a key aspect in its clinical management.

Prior to this study, we conducted a questionnaire survey on 300 patients who were Dystonia Friends Association (DFA) members (a Japanese nonprofit organization) to clarify their illness history, problems in daily life, and treatment satisfaction [1]. Answers were received from 143 patients. Among the patients who responded, 59 were suffering from cervical dystonia and 113 from primary dystonia. Botulinum toxin therapy was effective especially for cervical dystonia and provided various levels of improvement; however, it depended on the skill of the individual doctor. Treatment satisfaction and level of improvement were high for deep brain stimulation. Patients reported regularly experiencing inconvenience in daily life. Therefore, they strongly urged that the social security system be improved.

The questionnaire study included 226 dystonic patients who were DFA members. This survey was conducted between October 27 and November 7, 2014. Answers were received anonymously by mail: this was interpreted as consent to the study. The survey was designed to be patient self-report; all mail survey responses were purely voluntary and no ethical approval was sought. However, one of the aims of DFA is to research on patients with dystonia and they agreed to the aim when they joined DFA.

Shuichi Kawashima, Kazutaka Mochizuki, and Taku Satoh were members of DFA with dystonia. They developed the questionnaire and collected, summarized and analyzed the data.

The questions presented in the survey covered these five areas in Japanese: (1) dystonia type (multiple choices allowed: cervical dystonia, writer’s cramp, generalized, blepharospasm, and others): (2) current treatment methods and annual cost (free-text response): (3) annual cost of transportation for treatment (free-text response): (4) employment status (four options: A. I am currently working with very little fear or being laid off because of my dystonic symptoms: B. I am working, but I fear that I will be laid off because of my dystonic symptoms/I will be unemployed: C. despite the need to work, I cannot because of my dystonic symptoms: and D. I do not need to work): and (5) quality of life (free-text response) – patients were asked about the worst effect of dystonia on their quality of life (within 60 characters in Japanese).

Survey answers were received from 169 of 226 DFA members (75%). Frequencies of cervical dystonia, writer’s cramp, generalized dystonia, and blepharospasm are presented in Figure 1. Cervical dystonia was most frequent. 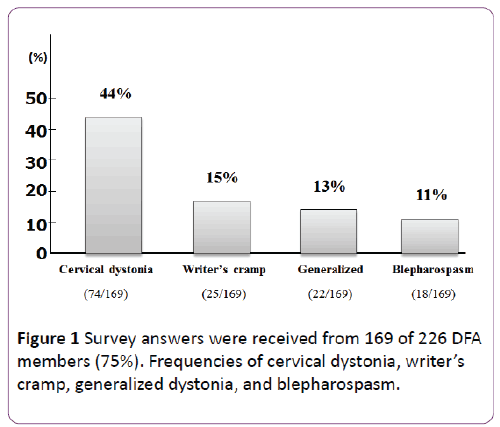 In Japan, a large part of the treatment cost is covered by health insurance; however, the patients must co-pay a percentage of the overall costs. The average annual treatment expenditure per patient is presented in Figure 2. Cervical dystonia requires high doses of botulinum toxin and treatment is expensive. Costs were described in Japanese yen with the exchange rate taken at the time of analysis (1 USD was 108 \ in October 2014). The average annual cost of transportation related to treatment was approximately ¥46,000 (although in three patients, the costs were as high as ¥500,000, ¥350,000, and ¥300,000). 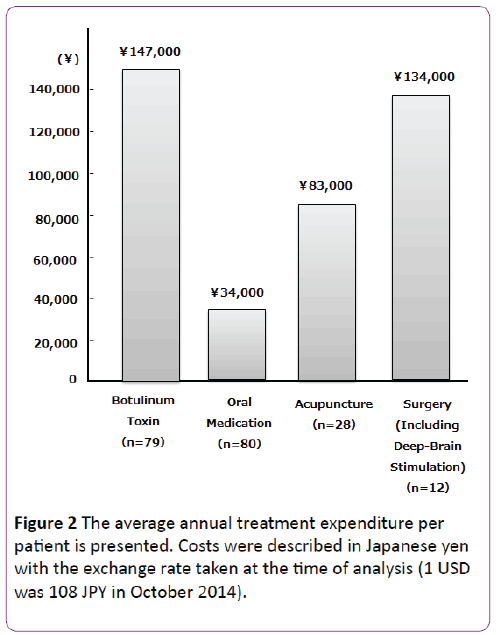 Figure 2: The average annual treatment expenditure per patient is presented. Costs were described in Japanese yen with the exchange rate taken at the time of analysis (1 USD was 108 JPY in October 2014).

The impact of dystonia on daily life was serious in our results; it has been reported that people with cervical dystonia retire at least 10 years earlier than the general population due to their condition [3]. Comella and Bhatia conducted an international survey of cervical dystonia patients’ own perceptions of their illness and its management [4]. A total of 1,071 self-identified respondents with cervical dystonia in 38 countries (besides Japan) completed the online survey. Twothirds (66%) of patients reported they experienced much pain but there were no questions about economic and employment burdens. That survey was developed by doctors; our survey was developed by patients who themselves experienced financial burden and stress from pain. This was a planned portion of the survey. DFA provided the questionnaire results to the Ministry of Health, Labour and Welfare in Japan on November 18, 2014. However, only hereditary generalized dystonia was acknowledged as an intractable disease in Japan in July 2015.

Kaji et al. conducted a single-dose, placebo-controlled, double blind, dose-response study of NerBloc, a botulinum toxin type B (BTB) in patients with cervical dystonia (placebo, 2,500 U, 5,000 U, 10,000 U [5]). The Toronto Western Torticollis Rating Scale (TWSTRS) total scores showed significant improvement in all treatment groups (2,500 U, 5,000 U, 10,000 U) compared with the placebo group. The subjects’ and physicians’ global assessments (visual analog scale) showed significant improvement in all treatment groups relative to the placebo groups [5]. Assuming that 100 units of Botox, a botulinum toxin type A (BTA) formulation, is equivalent to 5,000 units of NerBloc, a BTB formulation [6,7], the use of BTB would greatly reduce patient copayments (possibly as much as 40% compared to BTA; Table 1). Both BTA and BTB treat cervical dystonia effectively; Pappert et al. confirmed non-inferiority [8]. Furthermore, BTB relieves pain more effectively than BTA does [9]. We speculate that BTB formulations could become the first choice for treatment of cervical dystonia.

Few patients, limited number of questions on the questionnaire, and lack of generalizability (patients all recruited from DFA) were limitations of the study. A key limitation was the self-identification of respondents as dystonia patients. There was no verification of diagnosis or economic, employment, and pain experiences other than self-report.

Patients reported regularly experiencing inconvenience in daily life for economic, employment, and pain reasons. Improving the quality of life of patients with dystonia by reducing these burdens is a key aspect in its clinical management.