Evaluating the In Vitro Antagonism of Secondary Metabolites Fractionated from the Brown Algae, Sargassum swartzii against Human Candida spp.

Objective: To inspect the anticandidal potency of brown algae S. swartzii and GC-MS analysis to delineate its bioactive principles.

Methods: The marine brown algae S. swartzii, was extracted and fractionated in organic solvents and quantitatively analyzed for its in vitro anticandidal potency against a battery of five clinically relevant species of Candida.

Results: The fractionation of the crude algal extract yielded a bioactive algal fraction that exhibited broadest spectra of activity. It impeded the growth of all the evaluated Yeast pathogens in variable degrees. The maximal activity was recorded against the Candida albicans. The GC-MS studies of active algal fraction evinced the presence of three chemical constituents. Thence, the potent broad spectra of activity against the human Candida could be due the presence of major principle 1,2-Benzenedicarboxylic acid, diisooctyl ester, or could be pertained to the synergistic activity all the components.

Conclusion: The overall results of this study implicates that the bioactive principles found in this algal fraction could be utilized as a lead molecule to develop natural antifungal drug to combat pathogenic Candida species.

Fungi are the diverse group of ubiquitous eukaryotes which intercedes vital ecological processes. Nevertheless, many of them are primary or opportunistic pathogens capable of inflicting wide spectra of ailments in humans [1]. Amid the 1.5 million estimated species of fungi, around 317 species are known to smite diseases in human [2,3]. The fungal scourges have broad and variable clinical manifestations ranging from superficial skin and nails infections to disseminated life threatening infections [1]. In the developing countries, opportunistic fungi are oftentimes causing infections in immuno-compromised patients which therefore need to control promptly. Of the different infective species of fungi, Yeasts of the Candida genus inflict fatal systemic infections which increased substantially over the last decade. For instance, it is noted that the Candida spp. are the most common opportunistic pathogen in AIDS patients [4]. In addition, infections due to non-albicans species have also egressed over the past two decades, and a switch from C. albicans to species such as Candida glabrata, Candida parapsilosis, and Candida tropicalis has alarmingly increasing [5].

During the last decades, pharmaceutical industries have produced limited number of new therapeutic drugs for the management of Candida. However, the prolonged/inadequate usage of exciting antifungal drugs has precipitated the emergence of drug resistant Candida spp. and poses an extra concern [6]. With the increased incidence of Candidal infections coupled with the setback associated with the overuse and misuse of antibiotics demonstrates the insistent need of finding safe, novel and effective antifungal agents. Therefore, novel antifungal drugs with increased potency are required in lieu of conventional antibiotics for the management of fungal diseases.

In comparison to the chemicals and drugs used for synthetic treatments, allo-chemicals from marine origin are less associated with negative effects and have enormous therapeutic potentials to heal many infectious maladies in human [7]. Currently, marine organisms are an enormous reserve of novel drugs and drug leads for the pharmaceutical industry. Marine natural products have been discovered from a wide array of organisms including sponges, algae, bryozoans, mollusks, cnidarians, tunicates, echinoderms, sea worms and microorganisms. It is a confirmed fact that, the marine algae are prime candidate in producing antimicrobial metabolites to thwart the invaders in their natural habitat. Pluralities of algal species have been reported to possess multitude of bioactivities and thence, potential for elaborating antimicrobial agents. For instance, literature addressed that species of genus Sargassum presented diverse activities such as anti-Herpetic [8], antiretroviral [9], antifungal [10], antibacterial [11], and anticancer [12].

Retrospective examination evidenced that antifungal actions of marine algae were exposited as earlier as 1915s [13]. Various marine algae from the Southwest littoral of India has been recently corroborated for exerting diverse bioactivities such as antibacterial [14], antifungal [15], antiviral [16], anticoagulant [17] and cytotoxicity [18]. In so far, there is no precedence of research being conducted to inspect the antagonistic potential of brown algae, Sargassum swartzii against human Candida. In our preliminary experiments, the crude methanolic extract of S. swartzii evinced pronounced antibacterial activity against clinical and biofilm forming bacteria. In this regard, the brown algae S. swartzii was preferred to explore its anticandidal potency and GC-MS analysis to delineate its bioactive principles.

Live and healthy thalli of marine algae, S. swartzii were handpicked at ebb tide from the rugged intertidal zone of Kollam coast, South India (08°54’ N and 76°38’ E). Garnered specimens were then successively rinsed with seawater to remove dirt and transferred to laboratory in plastic bags containing seawater to prevent evaporation. The rinsed thalli were air dried under a stream of air flow for one week at room temperature to prevent photolysis and thermal degradation of metabolites. Dried fronds of algae were powdered in a coffee grinder, packed in polyethylene bags and stored in moisture free place until extraction

Algal bioactives were extracted from dried algal powder according to the parameters previously optimized [14]. Briefly, a definite quantity (200 g) of dried algal powder was submerged in conical flasks (2000 mL) containing 1000 mL of methanol (MeOH) and placed at 35°C on a shaker at 120 rpm for two weeks to permit full extraction of the bioactive components. After two weeks, algal material was filtered using Whatman filter paper No 1. The filter residue was collected in a round-bottom flask and the solvent was concentrated in a rotary vacuum evaporator at 45°C for the elimination of MeOH. The resultant gummy dark coloured extract was collected in airtight plastic vials and stored in the refrigerator for further studies.

A known morsel of dried extract of the algae (crude solid residue collected after vacuum evaporation) was adsorbed to silica gel and applied in a column developed with petroleum ether and eluted step-wise with petroleum ether and ethyl acetate (9:1 to 1:9 and 100% ethyl acetate) followed by ethyl acetate and methanol (9:1 to 1:9 and 100% methanol) [15]. Column elute was collected in 10 mL screw cap bottles. Preliminary experiments confirmed that the fraction eluted using ethyl acetate: methanol (4:6) retained antibacterial activity (data not shown). Other fractions that displayed meagre activity were not more considered in the present study. Hence, the same fraction (4:6) was used to investigate anticandidal activity and GC-MS analysis.

The active fraction was chemically analysed through GC-MS method as described elsewhere [14].

To determine anticandidal activity, the pre-selected algal fraction was evaluated against a battery of clinically relevant five species of Candida those previously used and continuously maintained in our laboratory [15]. The anticandidal assay was performed as described elsewhere [15]. The Sabouraud dextrose agar (Himedia) was used for bioactivity screening and routine propagation of human fungus respectively. Cell suspensions containing 107 CFU/ml cells for yeasts, were prepared and aseptically besmeared onto the surface of the agar plates of Sabouraud dextrose medium using sterile swab sticks. Thereafter, wells with five millimeter of diameter were prepared using a sterile cork borer. The resultant wells were carefully filled with 100 μl (15 mg/ml) of algal fraction. The well with binary solvents used for fractionation was considered as negative control. The assay was performed in triplicates of individual Petri dishes. The clear zones of inhibition formed around wells after 48 h at 30°C were considered to be an indicative of anticandidal activity. The inhibitory activity was recorded by calculating the area of clear zone and anti-biogram was statistically analyzed.

Our preliminary study posited that, the methanolic extract of S. swartzii was excellent for subduing the growth of clinical and biofilm forming bacteria in vitro (data not shown). And there is an extreme paucity of studies pertains to the anticandidal efficacy of S. swartzii from the Indian littoral. Thence, in the present study, anticandidal activity of S. swartzii was explored against the panel of five species of Candida. The overall results emphasize the potentiality of using S. swartzii for the development of chemotherapeutic agents against Candida sp. Figure 1 illustrates the inhibitory spectra produced by the S. swartzii against Candida spp. It is evident that the S. swartzii exerted broad spectra of activity against all the tested species of Candida in varying degrees. The active algal fraction produced mean zones of inhibition ranged between 102.17 ± 10.03 mm2 to 117.51 ± 22.28 mm2 against the Candida sp. The anticandidal action was very high against C. albicans to the extent of 117.51 ± 22.28 mm2. The nearly active range was displayed against C. tropicalis (110.37 ± 17.7) and C. glabrata (107.03 ± 23.45). The activity range of C. krusie and C. parapsilosis accounted for 100.86 ± 20.5 and 102.17 ± 10.03 mm2 respectively. The overall results exposited that potent anticandidal constituent can be isolated from S. swartzii. 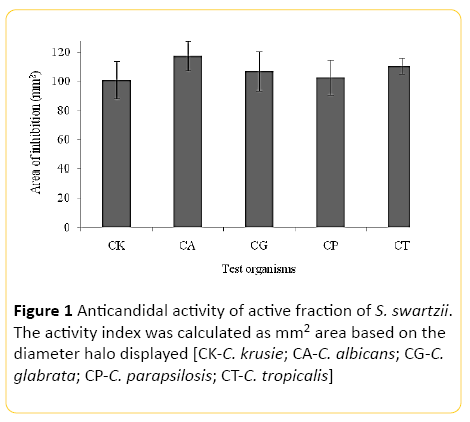 The active fraction was subjected to GC-MS analysis to explicate its bioactive chemical constituents. The spectral data has brought a single prominent peak to fore with the retention time and molecular weight of 25.73 and 390 respectively (Table 1). MS data has perfectly matched a compound of molecular formula C24H38O4 that is analogous to 1,2- Benzenedicarboxylic acid, diisooctyl ester in the NIST library.

Table 1 Components identified in the active fraction of S. swartzii by GC-MS study

Globally, diseases caused by the species of genus Candida are leading health problems with high morbidity in immunocompetent and immuno-compromised patients [19]. The application of chemotherapeutics for the management of clinically relevant Candida spp. is currently restricted by the development of drug resistance. In this viewpoint, an antifungal agent with broad efficacy and minimal side effect is needed to mitigate the plights of vast masses of immunocompetent and immuno-compromised patients.

Bioactive molecules of marine algal origin have high potentiality to subjugate the growth of many infectious organisms. In fact, several in vitro studies are demonstrated the anticandidal activity of many marine algae [15,20-22]. Albeit, diverse species of Sargassum from the Indian coast has been recognized as a potential source of antibacterial agents, the anticandidal activity has seldom been reported [23]. Therefore, in the present study, secondary metabolites fractionated from S. swartzii were quantitatively examined anticandidal efficacy. The algal fraction exerted wider spectrum of activity, since it impeded the growth of all the evaluated Yeast pathogens in variable degrees. Anticandidal activity was found to be positively skewed toward C. albicans as compared to other Yeast spp. This type of variation in the efficacy was analogous to that observed for red algae, A. taxiformis against human Candida spp. [15]. In accordance with the present study, the crude extract of other sp. of Sargassum exhibited antifungal activity against C. albicans [24]. The demonstration of anticandidal efficiency is an indication that the S. swartzii is a potential source for bioactive-compounds with broad spectra of activity. The secondary metabolites extracted from the algae can incapacitate the growth of Yeast by mechanisms that are unlike those of antifungal agents currently available. Thence, it is posited to have significant clinical value in the management of resistant yeast strains. Howbeit, further detailed studies are necessary to verify the in vivo efficacy and mechanism of action.

The antimicrobial compounds responsible for the anticandidal efficacy are not elucidated in this study. Howbeit, GC-MS analysis of active fraction evinced the presence of three compounds such as, 1,2-Benzenedicarboxylic acid, diisooctyl ester (390 g/mol), n-Hexadecanoic acid (256 g/mol) and 3, 7, 11, 15-Tetramethyl-2-hexadecen-1-ol (296 g/mol) Thence, it is envisaged that the growth inhibition of Candida spp. displayed by the active algal fraction could be due to the presence of major principle 1,2-Benzenedicarboxylic acid, diisooctyl ester, or could be related with synergistic activity of all components, since antimicrobial activities are pertained to the presence of secondary metabolites. The bioactive phytochemicals of diverse species of genus Sargassum were well reviewed by Liu et al. [25]. The same author noted the presence of 1,2-Benzenedicarboxylic acid; Dioctyl ester in S. wightii. Similarly, the GC-MS results are in line with recent studies that annotated the similar bioactive chemical constituents in other plant specimens [26-29].