Sural nerve is one of sensory nerves in lower limb which there are many variations based on origin, branches and path. Information of depth of in the sural nerve is important specially in harvesting. The study was consisting of 40 lower limb specimens in 20 cadavers that sural nerve was evaluated about origin, depth, its relation with lesser saphenous vein and length. Anatomical data was extracted and its origin was classified based on Ramakrishnan’s study. In this study, for the first time, the evidence about the depth of the sural nerve was obtained. In the most cases, nerve pathway passes between fibers of gastrocnemius muscles.

The mean nerve length was reported 36.05 cm and the most common pattern of the origin nerve was type 3A (30%) and type 5 was not observed and no was observed in cadavers in this study. Making of enough information about depth and path of the sural nerve can reduce the iatrogenic injury to the nerve during operative procedures of lower limb.

The Sural Nervous (SN) system is a set of different connecting tibia and peroneal nerves branches. This sensory nerve that is responsible for the sensation of the distal posterior third of the foot runs down to the posterior part of the calf [1,2]. Sural nerve usually arises in the distal half of the leg, and passes between the two heads of the gastrocnemius muscle.

The origin of SN is highly variable; however, mainly the branches of the Tibia Nerve (TN) and the Common Peroneal Nerve (CPN) contribute to the origin of the SN. A connection between the Medial Sural Cutaneous Nerve (MSCN) and the Lateral Sural Cutaneous Nerve (LSCN) is another anatomical origination for this nerve. Rarely, it has been also noted that the sural nerve may have been directly derived from the Sciatic Nerve (SCN) [3].

Information about SN anatomy is critical, due to its clinical and surgical applications. One of the most important implications of this nerve is its use as a nerve graft donor [4]. Sural nerve grafts have been utilized for nerve palsy regeneration and transection of the nerves [5,6]. It has been applied as reverse sural flap, as well. Besides, a rapid regional anesthetization of the posterolateral calf and lateral of foot can be easily achieved by SN blockage [7].

Most of the previous anatomical studies in the literature have discussed about SN origination and pathway, while to the best of our knowledge, limited research have been conducted to evaluate the depth of this nerve; while this issue is crucial to maintain SN in surgeries such as reconstruction of the distal third defect of the lower limb to reverse sural flap [8,9]. Therefore, the current study aims to evaluate the variations in SN anatomy, origin, pathway and depth.

The current descriptive study that met the Helsinki declaration criteria was certified by the ethecs committee of Isfahan university of medical sciences. Written consent was signed by the legal guardians of the studied population.

Convenience sampling was applied to include and dissect 20 cadavers (17 males, and 3 females), equal to 40 healthy limbs, from April 2020 to May 2021.The cadavers were placed in a prone position, with an incision of Lazy S of the popliteal to the lateral malleolus (Figure 1).

Primarily, the small saphenous vein was explored in the lateral malleolus, thus the sural nerve was recognized nearby, continued retrograde to its origin and then, branches of the sural nerve to the Sciatic Nerve (SCN).

The origin of the nerve was identified primarily and its depth at the site of the gastrocnemius raphe and adjacent to the small saphenous vein was recorded. Finally, the nerve length from the site of origin to the lateral malleolus was measured. 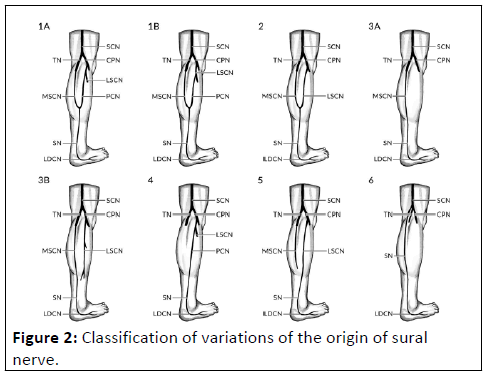 Figure 2: Classification of variations of the origin of sural nerve.

Type 1A: The SN was formed from the connection of the MSCN of the TN and the Peroneal Communication Nerve (PCN) arising from the CPN.

Type 1B: The SN was made up by the connection of the MSCN of the TN and the PCN arising directly from the LSCN.

Type 2: The MSCN of the TN and the LSCN of the CPN made up the SN.

Type 3A: The SN is a continuation of the MSCN with absence of PCN and LSCN.

Type 3B: The SN is a continuation of the MSCN, while there is no PCN and LSCN is independently derived from the CPN.

Type 4: The SN is a branch of PCN alone.

Type 5: The SN is made up of the LSCN alone with free or absent MSCN.

Type 6: The SN is directly separated from the SCN.

The length of the SN was measured from its origin to the lateral malleolus. Accordingly, in type 1, the nerve is formed by connecting the PCN and MSCN; and in type 2, the nerve is created by connecting the MSCN and LSCN. The total length of the true sural nerve was measured from the site of two branches connection, and as the MSCN is also used in clinical applications, the mean length of the MSCN was added to the true sural nerve length, and this was calculated as the nerve length in types 1 and 2.

The frequencies and distributions of the SN variations, its originations, depth and anatomical position in regards to lesser saphenous vein are presented.

In this study, 20 cadavers (3 females and 17 males) were selected. The etiology of death was different in the studied population whom were Iranian except 4 ones who were from Afghan emigrants.

Origin of the sural nerve

Table 1: Origin of the sural nerve. Morphometric measurements of the sural nerve

In morphometric measurements, the sural nerve length was measured from the origin to the lateral malleolus in both legs.

The sural nerve was mostly along with the fibers of gastrocnemius muscle (55%) followed by superficial fascia (25%). Sixteen (80%) of the cadavers had similar both sides depth of the sural nerves. Table 2 demonstrates the information in detail (Figure 4). The diverse locations of sural nerve in regard to its depth are show in Figure 4(a,b,c,d).. 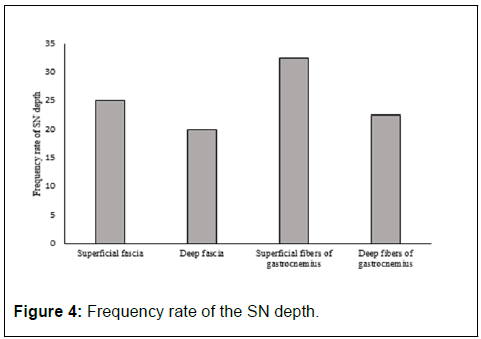 Lesser saphenous vein was adjacent to the sural nerve in 32 legs (80%).

The SN nerve is one of the most common ones applied in numerous surgical correctional procedures such as neural regeneration and reverse sural flap. Thus, it is critical to have a thorough insight of the anatomical variations of this nerve, including its location, origin, depth, bilateral symmetry and the nearby tissues. Since a long time ago, numerous investigations in this regard have been performed; nevertheless, due to the significant diversities, anatomy of sural nerve remained an issue of debate [11].

According to Ramakrishnan classification, type 3A of sural nerve was the most common variation found in our study. This findings is in line with some of the previous studies that mostly have presented the medial sural cutaneous nerve itself as the sural nerve with no communication between MSCN and PCN [12,13]. Ramakrishnan published a meta-analysis in which data of 3974 persons were pooled out and declared type 3 as the second common anatomical variation of the sural nerve accounting for 31.2% of the cases. Although our outcomes regarding type 3 of sural nerve anatomy are similar comparable with this study, type A, including A1 and A2 was the most prevalent type.

In the current study, type A was fond in 12.5% of the cadavers only, 7.5% and 5% for type A1 and A2, respectively. Ramakrishnan study presented 51.5% for type A, while remarkably higher prevalence have been presented in South Korea by 86.1% and Egypt by 87.5%, as well [14,15]. Most of the studies in the literature in agreement with this study presented even up to 4-folds predominance of type A1 rather than A2.

Based on a meta-analysis, the prevalence of type 4, 5 and 6 accounted for less than 4%, whereas in our study, except for type 5 that was found in none of the patients, 27.5% of the cases categorized either in type 4 or type 6 of the classification.

The length of sural nerve was another assessed issue in this study. Mean measured length was 36.05 ± 3.87, while it ranged from 31-44 centimeters. Jeon and colleagues performed a similar cadaveric study in which they presented the mean length of 14.5 and 11.8 centimeters for Korean males and females, respectively which is consistent with the study of Slutsky representing the mean length of 14.8 centimeters [16-18]. Another investigation reported the mean of 25.9 centimeters [19]. These diversities seem to occur due to geographical height differences and to the more extent probably because of the diversity of definitions administered to measure the nerve length. Therefore, regional studies are strongly required to make a vision of anatomical variations in different communities.

The other assessed parameter of our study regarded depth of the sural nerve that has not been noted as much as the other more discussed entities. The sural nerve passed through the gastrocnemius muscle in 55% of the cadavers, while more superficial pathway through the fascia was found in 25% and the remained 20% run through the deep fascia. In an orthopedic study, the authors presented that the SN was mostly in depth rather than down-running superficially [20]. In a similar report, Ricci et al. presented early penetration of the SN to the depth by piercing the deep facia of gastrocnemius. Nevertheless, intramuscular passing down of the nerve has not been welldiscussed [21].

The complex of sural nerve, lesser saphenous vein and the communicating artery are an important component of reverse sural flap. Lesser saphenous vein which is almost always adjacent to the sural nerve is responsible for the drainage of this flap. In this term, the significance of assessing the anatomical variations of this vein with the nerve is better clarified. According to our study, in 80% of the cadavers the vein and nerve were located nearby. Similar outcomes were presented by Garagozlo in which 20.3% of the cadavers had different variations of the lesser saphenous vein and the sural nerve. Rodriguez-Acevedo conducted another study in which they presented the SN medial to the SSV in 17.4% and 8.7% exhibited the SN adjacent to the SSV above mid-calf point [22].

In summary, due to the widespread clinical applications of the sural nerve, it is necessary to obtain an accurate knowledge and understanding of the anatomy of the SN. Clinicians, especially surgeons, should get informed of the variations in the origin, depth and length of the SN to prevent iatrogenic damages to the nerve during lower limb operative procedures and maintain the SN for reverse sural flap. Accordingly, we found that type 3 is the most common variation of the SN. To the best of our knowledge, depth of the SN pathway was evaluated for the first time by which we found that sural nerve mostly passes through the superficial fibers of the gastrocnemius muscle.

The authors are grateful to Isfahan forensic medicine organization.

Citation: Parsa MA (2022) Evaluation of Anatomical Variations in Origin and Depth of Sural Nerve in Cadavers. Transl Biomed Vol:13 No:11