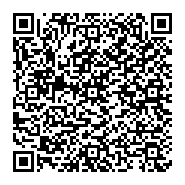 Helicobacter pylori (H. pylori) is an organism that causes several gastric issues in majority of the formulation, it is a gram negative bacteria that increases the secretion of acid in stomach causing ulcer of stomach and duodenum that may lead to several other conditions like Zollinger Ellison syndrome (ZES), gastro esophageal reflux disease (GERD) etc. A study was conducted on population of Karachi (n=400 i.e. 200 males and 200 females) having junk food in their diet either daily, per week, or in 15 days and those visiting OPD of different hospitals with having complain of acidity, to find out either the acidity was due to H. pylori or not, and found out that in majority of population H. pylori is the cause behind acidity, thus indicating the increased prevalence of H. pylori in the population having acidity issues, for which several measures should be taken.

Physiologically, the gastric cells secrete a certain amount of acid which is a natural mechanism as it activates an enzyme system which helps in the easy digestion of food substances. Diseases such as gastro esophageal reflux disease (GERD), esophageal ulcer, gastric ulcer; gastritis, duodenal ulcer, Zollinger Ellison syndrome (ZES) and Meckel’s diverticular ulcer are collectively represented by the term acid peptic diseases [1]. The major complications of peptic ulcer disease are perforation and hemorrhage which may result in high mortality of patients with this disease [2]. Patients with dyspepsia symptoms require to be investigated. Endoscopy is the best investigating tool for diagnosing the upper gastrointestinal tract diseases [3].

Peptic ulcer disease had a remarkable effect on morbidity and mortality until the 20th century, when epidemiological trend started to point to bizarre fall in its prevalence [4]. The discovery of an effective acid suppressant is a major milestone in the treatment of this condition. The discovery by various pathologists that a spiral shaped organism (which was later named as H. pylori) is one of the major risk factor behind acid peptic disease helped in minimizing the extent of the disease [4]. The discovery of the infection and identification of predisposing factors, all have a vital role in the eradication of the disease [5]. Helicobacter pylori tend to attack gastric mucosa and cause ulcers in the lining of stomach and the duodenum. H. pylori penetrates gastric mucosa where they are protected by mucus produced by the residing mucus secreting cells and hence the immune system of the body could not attack them. In this way disease such as gastritis, peptic ulcer, and gastric cancer are caused by this organism [6]. Patients with gastro duodenal diseases such as low grade gastric and peptic ulcer disease, mucosal lymphoid tissue (MALT) lymphoma; patients with atrophic gastritis; first degree relatives of patients with gastric cancer; patients with unexplained iron deficiency anemia; and patients with chronic idiopathic thrombocytopenic purpura are recommended to be treated by the eradication therapy [7]. For eradication of bacterium there is a regimen (according to NICE GUIDELINES) which includes antibiotics and proton pump inhibitors which successfully eradicates the bacterium and hence minimizes the symptoms of APD [8]. Whereas, as far as acid peptic disease is concerned, H2-receptor antagonists are the main line of treatment but other antacids are also used for the purpose of treatment varying from person to person such as in hypersecrtion of acid Omeprazole is preferred, while in smokers Sucralfate should be prescribed and for alcoholics Femotidine is used [9]. Food is classified into two categories known as healthy food and junk food [10]. Healthy food can be defined as food which helps in fulfilling the major nutritious and caloric demand of the body while junk food can be defined as food which is full of fats and carbohydrates which results in obesity, coronary diseases and also acid peptic diseases [10]. Increased consumption of soft drinks and alcoholic beverages may influence the increasing rates of gastro-esophageal reflux disease in the patients [11].

Aim of our study is to determine the incidence of H. pylori among population suffering from acid peptic disease especially in population having increase intake of junk food.

It was a cross sectional study in which we targeted the patients visiting outpatient departments in medicine of major public sector hospitals in Karachi. The patients presented with complaints of acidity and upper gastrointestinal discomfort. We gathered data in the form of a questionnaire and then collected their sample for H. pylori. Sample size was n=400, among which 200 were males and 200 were females in order to have equal population, firstly a questionnaire having 15 questions were distributed, question is general in a sense that they are related to their life style. Acidity issues related to junk food were inquired in order to determine the prevalence of H. pylori among sample. Then sample was collected for H. pylori test and results were determined.

The data was coded and analyzed on SPSS version 16.0 and different test are applied to find the occurrence prediabetes a sleeping factor inside body.

In our study total data contains 200 males and 200 females, from different social class and backgrounds from population of Karachi, visiting OPD of different hospitals.

Table 1: Gender and occurrence of H. pylori in sample population.

Table 2 reflects number of males and females that are consumers of junk food, which is further divided in to the frequency of consumption among junk food eaters, so 182 males and 178 females out of 200 are junk food consumers.

In Figure 1 and 2 data is explained on the basis of their work status on X-axis and on Y-axis sample size, APD, and H. pylori occurrence is given which indicates an equal existence of APD and H. pylori in all population of male’s and female’s. 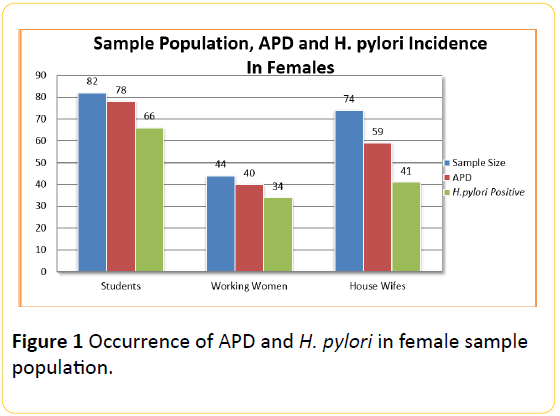 The results showed that the prevalence of H. pylori in our population is quite high and the data shows its clear association with acid peptic disease. Its occurrence is mostly very devastating in the developing population among those individuals who consumes junk food as it is one the most dangerous predisposing factor. It is obvious by the fact that among 200 population sample of male and female each, about 157 males and 142 females were having APD and H. pylori both reflecting the strong relationship between H. pylori infection leading to APD.

Those individuals who are habitual of beverages having caffeine for example soft drinks are predisposed towards H. pylori infection as it causes the gastric pH towards acidic scale and it is the most suitable and favorable environment for this bacteria to maintain its existence. This was approximately in accordance with the fact that out of 400 individuals (200 males and 200 females) who had symptoms of acidity, 351 were diagnosed with acid peptic disease and 299 were found to harbor H. pylori in their gastrointestinal tract.

Males especially jobless individuals and students are more prone to APD and H. pylori infections as they have more proportion of junk food and beverages in their regular diet as compare to females either they are students, housewife’s or working women. Jobless individuals and students probably are more prone to it because of stress which is yet another important factor in stimulating acid secretion from gastric mucosa and predispose towards APD.