Copyright: © 2017 Okara GC, et al. This is an open-access article distributed under the terms of the Creative Commons Attribution License, which permits unrestricted use, distribution, and reproduction in any medium, provided the original author and source are credited.

A study to determine the seroprevalence of hepatitis A virus (HAV) infection among apparently healthy Nigerian subjects aged between 2 and 80 years is reported. Serum anti-HAV IgM specific antibody was measured in blood samples of 1532 apparently healthy subjects (1138 males and 394 females) attending Dr. Hassan’s Hospital & Diagnostic Centre, Abuja, Nigeria using standard methods. The subjects were clients who visited the hospital for routine health check during a 15-month period from November 2014 to February 2016. The results showed that 1487 (97.06%) were seronegative, 45 (2.94%) were seropositive. There were significantly higher seropositive results for males (2.48%) compared to females (0.46%). The seroprevalence of HAV among the subjects of this study is considerably lower than the previous reports from Nigeria. The lower prevalence in this study could be due to the socioeconomic status of the subjects, who were mainly professionals and their family members. The reduced prevalence could be due to improved food hygiene, immunization and greater awareness among the subjects of the study group. Improvements in hygienic and socio-economic conditions are known factors that result in a decrease in the prevalence of the disease.

Hepatitis A virus (HAV) infection is an important public health problem around the world, especially in low-income and middleincome regions [1]. An estimated 1.5 million cases of hepatitis A occur globally each year [2]. The aetiological diagnosis is made by testing for IgM antibodies to HAV (IgM anti-HAV) in serum [2]. Seroprevalence is used as a marker of viral transmission in a community, as well as a determinant of disease burden. Socioeconomic factors play a major role in the spread of HAV infection.

Blood samples were collected from 1532 subjects (1138 males and 394 females) and tested for serum anti-HAV IgM specific antibody, using Aria HAV IgM Rapid test kit (CTK Biotech Inc, CA, USA). The subjects were clients who visited the hospital for routine health check over a 15-month period from November 2014 to February 2016. The subjects were predominantly educated professionals and members of their families. The study was approved by Ethical Committee of the Hospital.

Table 2 shows result by sex distribution of the study population. For males, 38(3.3%) were positive to anti-HAV and 7(0.6%) tested positive to anti-HAV in the females. This shows that HAV is more in males than in females. Transmission of HAV occurs more through faecal-oral route and spread more in unhygienic places. This could mean that the female subjects of the study population adhere to their personal hygiene more than their male counterparts.

Table 3 shows the result by age distribution. The subjects within the age bracket 21-40 years had the highest positive result of 32(2.2%) which is in accordance with the work done in University College Hospital, Ibadan, Nigeria with the highest prevalence on the 21-30 years age group 84(5.5%)[10] kobah et al. reported a prevalence of 55.2% in a study of children from a Nigerian rural community of lower social economic background [10]. Hepatitis A virus infection is often asymptomatic in childhood and its morbidity and fatality increase by age. In a study on newly hired employees of a care center in Riyadh in 2006, 67% were seropositive; whereas, 86% of seropositivity was shown by Fathalla et al among 11674 healthy population of Eastern Saudi [11,12]. More attention should be given to the subjects in the age group 21-40 years who are at their reproductive age and the major work force of the country.

Figure 1 is a histogram of the percentage positive and negative results by age groups. 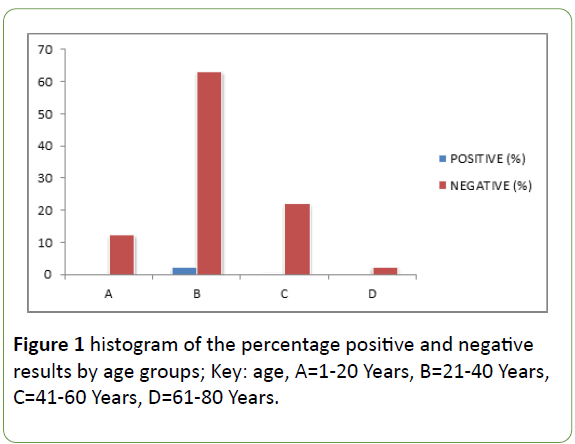 We express our deep appreciation and gratitude to the medical laboratory staff, doctors and nursing staff in Dr. Hassan’s Hospital and Diagnostic Centre, Abuja for the technical assistance that made this study possible.