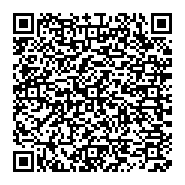 Background: Thrombolysis is efficacious for acute ischemic stroke; however it might increase the risk of following hemorrhage. Generally, hemorrhage may occur within the ischemic region because of ischemiareperfusion injury. However, hemorrhage of extraischemic lesion called extraischemic hemorrhage (EH) may sometimes observed. The risks and outcome of EH have been still controversial. Therefore, this study aimed to reveal the clinical characteristics of EH in recent cases.

Methods: Acute ischemic stroke patients who were treated with intravenous recombinant tissue plasminogen activator administration within 4.5 hrs following onset were consecutively screened (n=112). All cases were classified into no-bleeding (NB), cerebral hemorrhage within infarct lesion (HI) and EH groups. The MRI findings, patient’s background and outcome were assessed between EH and other groups.

Thrombolytic therapy with intravenous recombinant tissue plasminogen activator (IV rt-PA) administration is efficacious treatment for acute ischemic stroke within 4.5 hours of the onset, and also is recommended as best therapy in clinical guideline for stroke in Japan [1]. However, hemorrhagic complication is sometimes observed following the thrombolysis, and it might affect disease state and prognosis. Trouillas reported that cerebral hemorrhage after thrombolysis could be classified into three types, i.e., hemorrhagic infarction (HI), parenchymal hemorrhage and extraischemic hematoma (EH) [2]. Particularly, the incidence rate of EH is very low, and it’s pathogenesis and prognosis has not been fully understood. In this study, we evaluated the possible association between the incidences of EH and the pathology of cerebral small vessels by acquired imaging findings. Furthermore, we explored the premorbid clinical settings and outcome of the patients who suffered from EH after thrombolysis.

Following the approval of the ethical committee of the Research Institute for Brain and Blood Vessels –Akita, consecutive acute ischemic stroke patients who were admitted to our hospital and treated with IV rt-PA within 4.5 hours of onset were retrospectively screened between April 1, 2007 and March 31, 2015. We excluded patients who were not performed magnetic resonance imaging (MRI) scan because of implantation of a pacemaker, joint replacement and old intracranial clips. Moreover, we excluded patients who underwent intra-arterial thrombolysis and mechanical thrombectomy following IV rt-PA administration (Figure 1). The Japanese guideline was adopted for the indication of IV rt-PA administration [1]. Blood pressure was controlled by IV Ca channel blocker and maintained systolic blood pressure (sBP) <185 mmHg and diastolic blood pressure <110 mmHg before IV rt-PA infusion, and sBP <180 mmHg and dBP <105 mmHg following 24 hours of infusion. Within 24 hours of thrombolysis, any other antithrombotic agents were not prescribed. 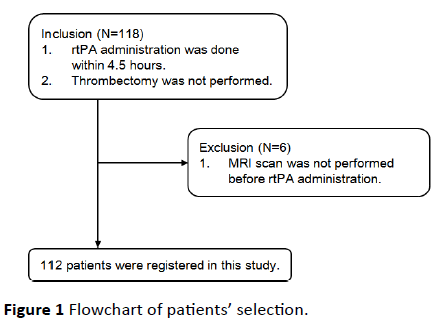 All patients were taken MRI examination at 24 hours after thrombolysis. Then, they were classified into three groups depending on MRI T2* weighted image (TR 3000, TE 50); nonbleeding group (NB group), hemorrhagic infarction group (HI group) and extraischemic hemorrhage group (EH group). In this study, both parenchymal and petechial hemorrhages were defined as HI unless the hemorrhage was observed within the ischemic lesion. We compared between EH group and other two groups for identifying patient characteristics in EH group.

Stroke risks such as hypertension, diabetes mellitus, hyperlipidemia, smoking, drinking and past ischemic stroke were assessed based on the clinical record. National Institute of Health stroke scale (NIHSS) was used for evaluation of neurologic severity. Modified Rankin scale (mRS) at the time of discharge from the hospital was used for evaluation of outcome. Good clinical outcome was defined as mRS<3, because it is one of the important point whether activity of daily life was independent or not. In addition, mRS was compared between at the time of admission and discharge for evaluating how patient’s outcome was affected by hemorrhagic complications.

CMBs were assessed based on MRI T2*WI, which was undertaken at the time of admission. Lesions within cerebral parenchyma were classified into three regions; infratentrial, basal ganglia and subcortical regions.

All statistical analysis was performed by JMP version 9 software (SAS institute Inc., NC). Numerical data was presented as median and quartile. Categorical data was presented as percentage. NIHSS at the time of admission and the severity of leukoaraiosis between EH and other two groups were evaluated by Steel-Dwass test. Other factors were evaluated by Fisher’s exact test. Improvement of mRS from admission to discharge was assessed as patient’s prognosis.

Patients of 70 (62.5%) showed no hemorrhagic transformation after thrombolysis (NB group). The incidence rate of hemorrhagic change after thrombolysis was 35 (31.2%) and 7 (6.3%) in HI and EH groups, respectively. Furthermore, hemorrhage with mass effect was 31and 4 cases, and without mass effect was 4 and 3 cases in HI and EH groups, respectively. Regarding the stroke risks, there was no significant difference between EH and NB or HI groups (Table 1). Neurologic severity was not different among three groups. The stroke subtypes of all patients were cardiogenic embolism (n=77), atherothrombotic infarction (n=21), lacunar infarction (n=9) and unknown origin (n=5). There was no lacunar infarction and unknown origin infarction in EH group. The distribution of stroke subtypes was not significantly different among three groups (Figure 2).

Table 1: Patient background in each group. 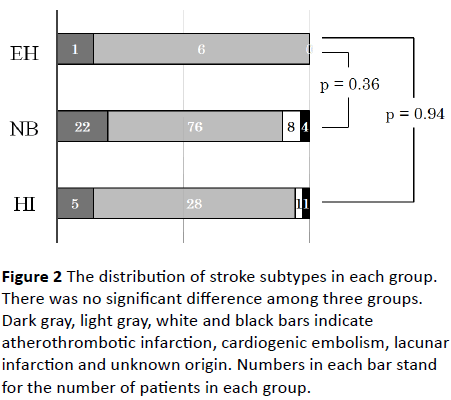 Figure 2: The distribution of stroke subtypes in each group. There was no significant difference among three groups. Dark gray, light gray, white and black bars indicate atherothrombotic infarction, cardiogenic embolism, lacunar infarction and unknown origin. Numbers in each bar stand for the number of patients in each group.

Table 2: The number of patients with CMBs and the severity of leukoaraiosis in each region.

Table 3: Comparison of mRS at the time of admission and discharge in each group.

It has been pointed out that incidence of extraischemic hemorrhage is associated to vascular fragility, which is pathologically explained by small vessel disease, observed as CMBs or leukoaraiosis in MRI findings. CMBs might associate with hypertensive microangiopathy in basal ganglia region and cerebral amyloid angiopathy (CAA) in subcortical region [9-12]. Then, presence of CMBs is reported to associate with incidence of cerebral hemorrhage in both healthy individuals and patients treated with antithrombotic agents [12-15]. Multiple CMBs, especially in CAA, could also relate to the increased risk of cerebral hemorrhage [16,17]. On the other hand, some studies reported that presence of CMBs did not relate to cerebral hemorrhage following thrombolysis [18-20]. In this study, CMBs in subcortical region was significantly frequent in EH group than NB group. It can be said that the presence of CMBs could be associated with EH after thrombolysis.

Contribution of Each Author

TE conducted throughout this study. TN carried out the statistical analysis and manuscript preparation. MS performed the screening of patients. TI coordinated and advised the settings of this study.

All authors report no financial or institutional conflicts in this study.