Methods: A total of 483 healthy male employees of 4 institutions in Essen in Western part of Germany, aged between 17 and 68 years (43.1 ± 9.6 y) were examined by ultrasound of the neck to determine the thyroid volume between April 2001 and April 2002. Information on age, BMI, smoking, daily use of iodized salt, and familial history of thyroid disorders were assessed by standardized questionnaires. Logistic regression analysis was performed to adjust for smoking, age, iodine status and familial history of goitre.

Smoking (p<0.001) and increasing age (p<0.001) was associated with goitre prevalence, but not BMI and the family history of goitre. Iodine status alone failed just to reach the significance level but revealed a clear trend. And there was significant prevalence of goitre in smoking men who did not take iodine salt compared to smoking men with regular intake of iodine salt (p=0.018).

Conclusions: Smoking increase the risk of goitre in men that can be decreased by taking iodine.

Goitre is a major health problem in Germany with an annual cost for treatment estimated at 1 billion Euro [1]. The etiology of simple endemic or sporadic goitre depends on genetic and environmental factors. The major factor, however, remain iodine deficiency [1,2].

Despite recent improvement of iodine supplementation in Germany since 1989 [3-8], the prevalence of goitre in Germany remains substantial [9,10].

An association between smoking and the risk of goitre have been reported in several studies predominantly or exclusively including females [11-17], but none in males.

In this prospective study, we investigated the prevalence of simple goitre among healthy smoker males in west part of Germany as compared to non-smokers with respect to age, iodine status and history of goitre in the first degree relatives.

A total of 483 healthy male employees of 4 institutions in Essen (Bethesda Essen and Karstadt) and Muelheim (Siemens and Mannesmann) in western part of Germany aged between 17 and 68 years (range: 43.1 ± 9.6 y) were examined by ultrasound of the neck to determine the thyroid volume.

Ultrasound was performed by one experienced investigator (J.F.) with a Siemens Sonoline SI-400 using a 7.5 MHz linear scanner. The ultrasound was performed according to standardized criteria and the volume of thyroid was determined as the sum of p/6 X lengths X width X depth of both lobes. Goitre was defined as a thyroid volume exceeding 25 ml.

All subjects with known thyroid disorder were excluded from this analysis. Information on date of birth, date of screening, sex, daily use of iodized salt, history of previous diseases including benign diseases of thyroid, history of thyroid disorders in the first degree relatives, and type and amount of smoking were assessed by standardized questionnaires.

Smoking was defined as consuming more than 10 cigarettes daily for at least 5 years. Because of small number of cases in groups of cigar and pipe smokers, we excluded 2 cigar and 2 pipe smokers from the analyses.

The general descriptive analysis was performed using Microsoft Excel (Version 7.0) and PASW-Statistics (version 19.0). Values for continuous variables are given as means ±SD. Statistical differences between groups and comparison of frequencies between groups were calculated with the Chi- Square test or the Fisher’s exact test for the 2 × 2 contingency tables.

Linear regression analysis was performed for continuous variables and logistic regression analysis was performed for the binary dependent variable, presence of goitre, to adjust for age, smoking, iodine status and familial history of goitre. Parameters were estimated using a least square and maximum-likelihood methods and the significance level was assessed using t-Test or Wald test respectively. A p-value below 0.05 was considered to be statistically significant. 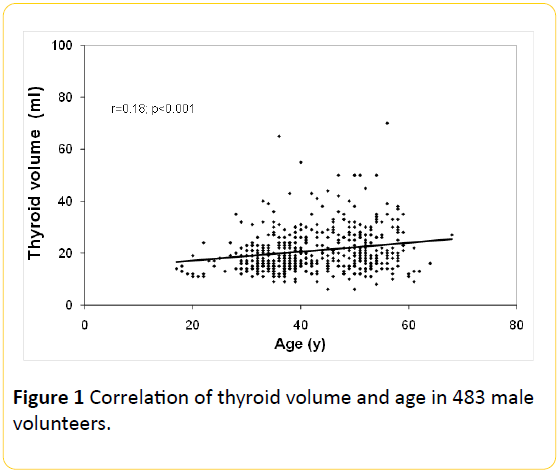 Figure 1: Correlation of thyroid volume and age in 483 male volunteers. Smoking (<0.001) and increasing age (p<0.001) associated with goitre prevalence by the logistic regression analysis but not the history of goitre in the first degree relatives (Table 1) and the iodine status failed just to reach the significant level in this analysis (p=0.056).

Chi-square-Test shows a higher prevalence of goitre among smokers who don’t use iodine salt compared to smokers taking iodine regularly (29.6% vs. 46.7%, p=0.018, poverall<0.001). Among the non-smoking individuals the frequency of goitre stays by 15.2% with iodine intake and by 17.9% without iodine (n.s.).

Earlier investigations suggest that cigarette smoking may increase thyroid hormone secretion [18]. The first clinical record of association between smoking and goitre prevalence was published 1984. In this study Christensen et al. [11] evaluated the prevalence of goitre by palpation in 441 middle aged women and found higher goitre prevalence among smokers (14.8%) as compared to ex-smokers (3.8%) and nonsmokers (9.4%).

In 219 randomly selected hospital employees, Hegedus et al. [12] found a higher prevalence of goitre among smokers (30%) as compared to non-smokers (3%).

Ericsson et al. [14] report in an epidemiological study from Sweden including more than 4000 subjects, a higher goitre prevalence among smoking females (14.2%) as compared to non-smokers (8.9%) and ex-smokers (7.0%).

Petersen et al. [15] found no increased prevalence of thyroid disease or goitre in 1154 middle-aged and older Swedish women with respect to smoking (14.3% smokers vs. 13.4% non-smokers).

Georgiadis et al. [16] investigated 187 employees of a hospital and their relatives and found goitrogen effect of smoking only in individuals with a family history of goitre.

However, these studies mostly or exclusively performed in female population, few suffer from insufficient number of subjects or inappropriate multivariate analysis of risk factors.

Knudsen et al. [17] report in a recent multivariate analysis on 4649 randomly selected sample of females and males (2002) on association between smoking and increased goitre prevalence, which was more pronounced in the most iodine deficient area.

The effects of smoking on the thyroid have been attributed to thiocyanate. Body fluid of smokers contains increased concentration of thiocyanate [19-22]. Thiocyanate inhibit iodide uptake and thyroid hormone synthesis and increase the efflux of iodide from the thyroid gland [22].

We conclude that smoking is an independent risk factor affecting the goitre prevalence in males. In addition, our study reveals that iodine intake can reduce the risk of goitre in smoker males significantly.