Copyright: © 2016 Kuzan TY. This is an open-access article distributed under the terms of the Creative Commons Attribution License, which permits unrestricted use, distribution, and reproduction in any medium, provided the original author and source are credited.

Extrapulmonary tuberculosis, constitutes almost one-fifth of all tuberculosis cases and less than 1% of all cases involving liver. Here we report a case of isolated hepatic tuberculoma mimicking solitary liver mass on MRI, recovered with anti-TB treatment. The radiologic features of hepatic tuberculoma can mimic liver tumors, cholangiocarcinomas, liver abscess and hydatid cyst, or may present with various forms of systemic diseases. The physical findings and imaging appearance of hepatic tuberculoma are considered to be nonspecific on US, CT and MRI that may cause diagnostic problems. For the accurate diagnosis of atypical liver lesions mimicing mass at radiologic imaging, a histopathological or bacteriological confirmation is often required.

Ultrasound examination revealed that normal size liver with heterogeneous-hypoechoic mass affected focal lesion in segment 6, measuring 7×4 cm (not shown). The patient also had bilateral atrophic kidney and splenomegaly. After that, ?V contrastenhanced MRI was performed with a superconducting unit (Verio; Siemens, Germany) operating at a field strength of 3.0 T by using a body coil in order to characterize the lesion. MRI examination showed that 7×4 cm lession with centrally hypointense and peripherally hyperintes on both T1 and T2-weighted imaging in the segment 6 of liver (Figures 1A and 1B). The lesions had peripheral enhancement after contrast administration (Figures 1C and 1D). A diffuse signal reduction in the liver and spleen consistent with hemochromatosis and bilateral atrophic kidney were also seen on MRI. Figure 1: The first MRI study shows extremely hypointense signal intensity in the liver (asterix) and spleen (star) on T1 (A) and T2WI (B) . MRI also demonstrated a large solid lesion in liver segment VI (arrow) with a peripheral high signal intensity on T1 (A) and T2WI (B). T1 with contrast image (C) and subtraction image (D) show heterogeneus peripheral enhacncement after contrast administration.

Because of atypical MRI finding, ultrasound-guided biopsies were performed the liver lesion. Histopathological examination of the specimen showed multiple epithelioid cell granulomas without caseation necrosis and portal fibrosis. Acid-Fast Bacilli (AFB) could not be detected in smear examination, and Polymerase Chain Reaction (PCR) for Mycobacterium tuberculosis was negative in the biopsy specimen. A diagnosis of granulomatous hepatitis was made. Despite negative AFB and PCR, tuberculosis and sarcoidosis were considered in the differential diagnosis. The patient reported no history of tuberculosis or any contact with tuberculosis patient. Thorax Computed Tomography (CT) was within normal limits. The patient had no evidence of extrahepati tuberculosis or sarcoidosis at the time of diagnosis. The patient was clinically accepted to have localized hepatic TB.

The patient was treated with a combination of rifampicin, isoniazid, ethambutol, and pyrazinamide for 6 months, It was observed that the patient recovered clinically and lesion regressed markedly (Figure 2) and after 6 of months anti-TB treatment, the lesion disappeared completely on the second control MRI (Figure 3). 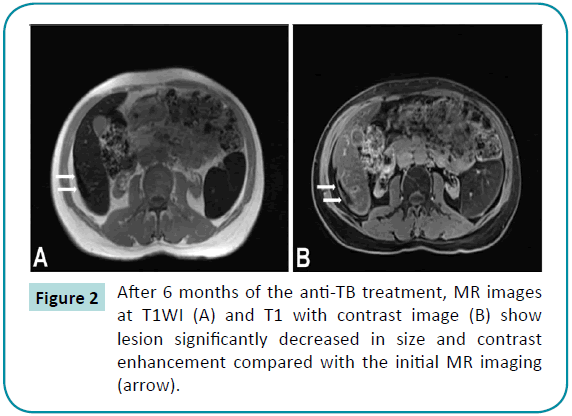 Figure 2: After 6 months of the anti-TB treatment, MR images at T1WI (A) and T1 with contrast image (B) show lesion significantly decreased in size and contrast enhancement compared with the initial MR imaging (arrow). 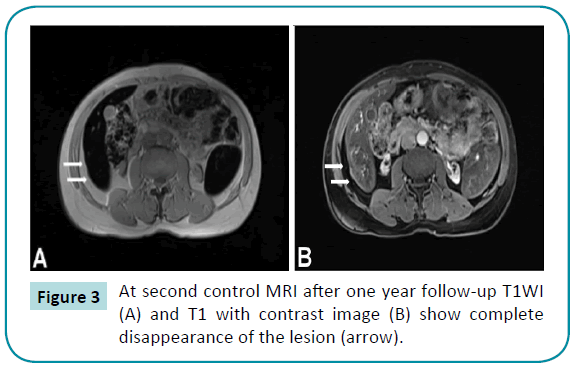 Figure 3: At second control MRI after one year follow-up T1WI (A) and T1 with contrast image (B) show complete disappearance of the lesion (arrow).

Tuberculosis demonstrates a variety of clinical and radiologic features depending on the organ site involved. Liver involvement in tuberculosis is rare and classified into three categories: miliary, granulomatous and localized hepatic form. A few cases of reported isolated hepatic tuberculoma with ultrasonography, CT, and MRI findings were confirmed by biopsy [4-6,9-11].

The radiologic features of hepatic tuberculoma can mimic liver tumors, cholangiocarcinomas, liver abscess and hydatid cyst, or may present with various forms of systemic diseases like as collagen vascular disorders and hepatic involvement in systemic infections including viral infection, fungal infection, enteric fever [7-12].

Our patient had a tumor-like mass lesion of the liver on the abdominal US and MRI. To make a correct diagnosis, ultrasonography-guided percutaneous liver biopsy was performed, and histopathological examination revealed granulomatous hepatitis without caseation, suggestive of sarcoidosis and tuberculosis. Clinical and imaging findings of the patient were not consistent with sarcoidosis. Despite negative AFB and PCR, a diagnosis of isolated hepatic tuberculosis was made based on the presence of the granuloma and anti-TB treatment was started. After 6 months of treatment, the patient was asymptomatic and the lesion regressed markedly at MRI. On the follow-up after 6 months of the treatment, the lesion disappeared completely at the second MRI control.

The physical findings and imaging appearance of hepatic tuberculoma are considered to be nonspecific at US, CT and MRI that may cause diagnostic problems. Although US, CT and MRI can detect hepatic tuberculom, differential diagnosis with other masses (cystic, necrotic or infected metastases, fungal abscesses, lymphoma) may be difficult [2,5]. Because of that hepatic tuberculom is often misdiagnosed as liver cancer, liver abscess, benign tumor of liver, liver cysts, liver hydatid and so on [7]. For the accurate diagnosis of atypical liver lesions mimicing mass at radiologic imaging, a histopathological or bacteriological confirmation is often required.