Methods and Findings: The study was conducted between June and OctoberÂ 2010. Thick blood smears were prepared using standard parasitological procedures,Â other information concerning the patients were obtained using a well structuredÂ questionnaire. Prevalence rate of malaria irrespective of Plasmodium species amongÂ the patients examined was 39.5% (102/258). Prevalence rate of malarial infection wasÂ not significantly different between sexes (Ï‡2Â = 0.01, p>0.05), age groups (Ï‡2Â = 6.44,Â p>0.05), educational status (Ï‡2= 6.1, p>0.05) and occupation of the patients examinedÂ (Ï‡2= 8.4, Â P>0.05). The study also revealed predominance of Â Plasmodium falciparummalaria (59.1%) among all the positive cases of malaria. Performance of the HRP-2 pfÂ RDTs showed a sensitivity of 89.5% and specificity of 100% in the area. Conclusion:Â The results obtained suggested that microscopy remains the gold standard methodÂ for diagnosis of malarial infection, although the HRP-2 pf RDTs can be used whereÂ microscopy is not available and in cases where urgent malaria diagnosis is needed.

Malaria is a life threatening disease caused by Plasmodium sp that are transmitted to people through the bite of infected mosquitoes. About 3.3 billion persons are estimated to be at risk of malarial infection of whom 243 million are infected (86% living in Africa) and nearly 863,000 (mostly African children) died of the infection [1].

In many endemic countries including Nigeria, patients are usually clinically diagnosed and only a small proportion of malaria cases are tested, owing to a lack of diagnostic capabilities therefore raising a considerable uncertainty surrounding the estimate of the number of cases and deaths.

The number of RDTs available on the market has grown rapidly since their introduction in the late 1990s. It is estimated that there are 60 brands and over 200 tests commercially available today, with an estimated 50-70 million tests used in 2008[2]. However, of the 27 products fully evaluated for rapid diagnostic of Plasmodium sp, only 6 are designed to detect P. falciparum the major cause of morbidity and mortality in sub-Saharan Africa [2].

Microscopy has been the corner stone of diagnosis and is recommended for malaria diagnosis where its quality can be maintained, but the need for trained personnel, adequate reagents and equipment limit its availability and accessibility to many people in malaria-endemic areas [2]. Microscopy is usually not available in most hospitals and where they are available, the test results are usually not readily available during consultation, which means that patients are treated based on the symptoms before the test results are available.

There are various serious challenges encountered in local hospitals, clinics and health centers in reporting malaria cases in Nigeria and also RDTs performance studies are mostly laboratory based, with only few from field settings. This study was designed to find out the level of malaria infection irrespective of Plasmodium species using microscopy among patients attending General Hospital Gboko, a semi-urban area in Benue State, Nigeria and evaluate the performance of the Histidine Rich Protein (HRP) - 2 pf Rapid Diagnostic Test for detecting falciparum malaria in a field setting representing the proper epidemiologic context.

The study was conducted in Gboko Local Government Area (LGA), a semi-urban area of Benue State, Nigeria located at latitude 7° 19’N and longitude 9°00’E. The climate is tropical, sub-humid with mean daily temperature of about 28°C and annual rainfall of 1000m. The rainy season is between April and October, while the dry season lasts from November to March. The area covers a land mass of 2, 264 km2 with a population of 358, 963 people making it one the most populous Local Government areas in Benue State [3].

The study was conducted between June and October 2010. Before collection of blood samples, permission was sought from the ethical clearance committee of Ministry of Health, Makurdi and the Hospital Management Board. Patients presenting themselves for malaria tests in the General hospital were duly informed on the significance of the study and their informed consent was given before collection of any blood sample. The study subjects consisted of 258 subjects aged between 1-70 years. Parental consents were obtained for young persons below 18 years.

Use of HRP-2 pf Rapid Diagnostic Test and Interpretation

The HRP-2 pf rapid malaria diagnosis test kits were kept at room temperature in the hospital’s laboratory and opened just before performing the test. Each test kit comprised a cassette, a pipette and a dropper containing a buffer. The left thumb of participants was thoroughly cleaned with methylated spirit and a sterile lancet was used to prick the finger to obtain blood sample. The blood was then dropped into the round sample well. Four drops of assay diluent (buffer) was added into the assay diluents well. The test result was read after 20 minutes. The presence of two pink colour bands (Test line “T” and control line “C”) within the result window indicates a positive result. If the control band fails to appear within the result window, the result is considered negative. Detailed description of the test is given in Malaria Rapid Diagnostic Performance [2].

Data were analyzed using PASW (Predictive Analysis Software) for windows version 18 and Chi-square test was used to compare prevalence of malaria infection between age, sex, occupation and educational status of the subjects. 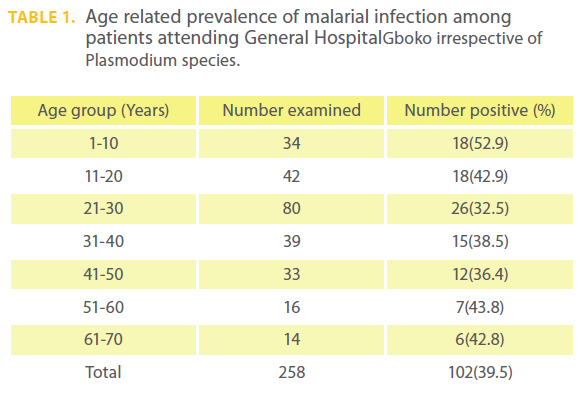 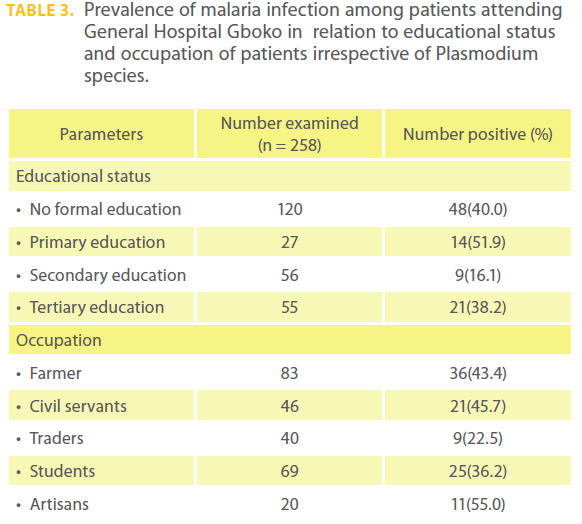 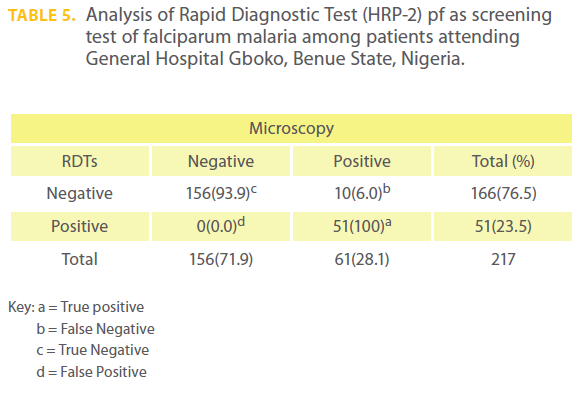 The study revealed a relatively high malaria prevalence rate (39.5%) among patients attending General Hospital Gboko, Benue State, Nigeria. In the same town, however, Houmsou etal. [5] obtained 76.9% infection among pregnant women attending antenatal clinics. Same reports in other parts of Nigeria were much lower, 30.2% and 7.7% among blood donors in Nnewi, Southeast and Lagos, Southwest, Nigeria respectively [6,7]. Compared to this report, Chansuda and Awalludin [8] reported high prevalence rate of 48.0% of malaria among patients in the Republic of Indonesia.

In this study, the highest malaria prevalence was observed in patients of the age groups 61-70 and 1-10 years with 55.6% and 52.9% respectively. The high rates of infection observed among these age groups could be due to age related weak immune system which could help susceptibility of erythrocytes to infection and or due to ignorance and lack of malaria preventive measures. This finding is however, consistent with the reports of Alioune et al. [9] who observed 51.8% each among the age groups 1-13 years and 55-68 years in Dielmo and Ndiop villages of Senegal.

The similar rates of infection observed among males (40.0%) and females (39.2%) could be the result of similar exposure to malaria parasite due to environmental and living conditions which support vector.

Both educational status and occupation have no influence on the prevalence rate of malaria among patients examined although those that have primary and no formal education were found having the highest prevalence rates. This could be as a result of lack of knowledge on the causative agents and preventive measures. Likewise, no significance difference was observed in malaria prevalence among patients’ occupation, but the highest prevalence observed among artisans (55.0%) could be due to the fact that the nature of their jobs expose them to mosquito bites. It could be also due to the fact some of them could not afford buying insecticides, mosquito nets, insecticides treated nets (ITNs) and antimalarial drugs.

Performance of the HRP-2 Rapid Diagnosis Test recorded a sensitivity of 89.5% and specificity of 100%. Sensitivity and specificity obtained in this study are similar with findings of Hopkins et al. [10] in Kampala, Uganda who observed sensitivity of 83.0% and specificity of 100% using the same RDTs products. The false-negative result obtained (6.0%) could be as a result of variability in the amino acid sequence of the HRP-2 antigen of P. falciparum that may affect the ability of RDT to detect it [1]. In certain P. falciparum parasites, the HRP-2 antigen may not be detected at all due to gene deletion by individual for the production of HRP-2 and so will give a negative result with these RDTs [1]. Other limitations of RDT for this antigen relate specifically to technical aspects of the HRP-2 test system which could include the method used to transport and store tests which could affect their field sensitivity. The sensitivity could also be dependent on the quality of preparation and interpretation of the tests [1].

The study revealed that HRP-2 RDTs had some limitations because false-negative results (6.0%) were obtained. Nevertheless, in settings where microscopy is unavailable using RDTs can lead to a significant reduction in the over prescription of anti-malarial drugs. However, blood film examination in microscopy remains the standard method for diagnosing malaria since it detected all cases of Plasmodium species and allows visualization of parasite growth stage which is essential in making therapeutic decisions. Thus, to reduce spread of malaria in the populace, it is recommended that the general public in Gboko should be enlightened on the importance of environmental hygiene; the Local Government Environmental Sanitation Agency should provide means of disposing waste properly and watch over mosquito breeding sites to avoid spread of malaria. However, it is also recommended that RDTs should be used when microscopy is not available and if significant proportion of parasites in a given area do not express HRP-2, it will be necessary to use tests detecting other target antigen such as pLDH or Aldolase.

HRS and AEU designed and conceived the study. STT was central to the conception and supervise laboratory work. AAH helped in collecting blood samples from patients and prepared thick blood films for examination. HRS carried out statistical analysis and drafted the paper. AEU gave critical review of the paper and all authors read and approved final version of the paper.

We sincerely give thanks to the Ministry of Health, Makurdi, Benue State, Nigeria and the General Hospital Gboko management board for granting us permission to carry out the research. We also acknowledge patients who voluntarily participated in the study and without whom the study would not have been feasible.