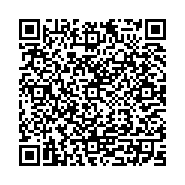 Marchiafava-Bignami disease (MBD) is a rare, often fatal, toxic neurological disease mainly characterized by demyelination of the corpus callosum, with or without associated lesions of hemispheric white matter. The clinical picture is severe, and includes both neuropsychiatric features, and signs of interhemispheric disconnection. The disease can have an acute or chronic course. Neuroimaging provides the most useful information for diagnosis and prognosis. We present a 44- year-old patient suffering from subacute onset of MBD, in who diffusion-weighted MRI revealed symmetrical hyperintense lesions in the frontal region of cerebral cortex and in the body/splenium of corpus callosum. Involvement of the corpus callosum was partial; the diagnosis was rather prompt, and the treatment was appropriated. The patient, survived to the acute phase, developed a chronic dementia.

Marchiafava-Bignami disease (MBD) is a rare disease, with overall high mortality and disability rates, where many pathogenic and prognostic factors are somewhat obscure. Both the clinical and the imaging features can provide useful information about the evolution. However the clinical significance of the presence of extra-callosal lesions is still uncertain [1]. Our patient has stabilized into a chronic dementia, despite the presence of favorable and unfavorable prognostic hints.

A 44 year-old Italian man with a 25-year history of alcohol abuse (he declared cheap Italian red wine, 2 liters/day) was admitted to the emergency room (ER) of our hospital. In the past two weeks he had been increasingly showing asthenia, mental slowing and gait impairment. Relatives reported a weight loss of 4 kg in 10 days, secondary to complete fasting.

On clinical examination, he seemed cachectic (body weight = 48 kg) and dehydrated. He was confused and disoriented in space and time. He appeared overall slow from the psychomotor point of view, and unable to execute complex orders. On neurological examination, he showed an ataxic gait, and a diffuse muscle wasting and weakness (more proximal than distal). His face was hypo-mimic, and his speech was dysarthric and slow. Tendon reflexes were diffusely weak, while plantar responses were normal. Cranial nerves examination was normal. There were no sensation defects. Meningeal signs were absent.

A CT scan of the head showed a low-density lesion in the splenium of the corpus callosum. Moreover, there were lowdensity lesions, without perilesional edema, in the lateral frontal lobe on both sides (Figures 1A and 1B). Figure 1: Brain TC executed in ER shows low-density lesions in the splenium of the corpus callosum. (A) and in frontal lobe bilaterally (B). 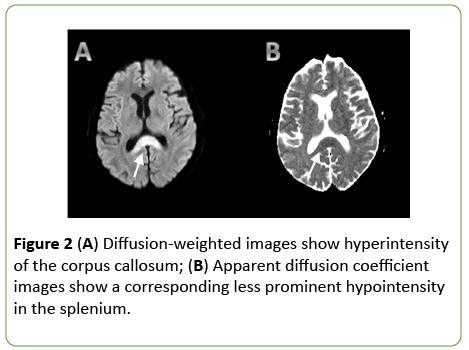 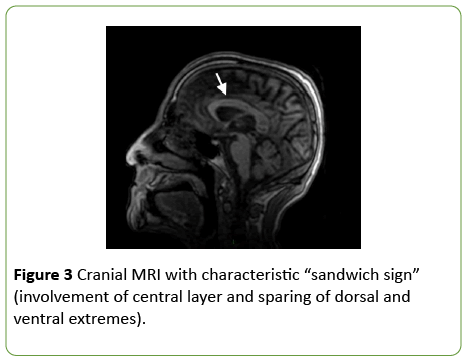 After 15 days of hospitalization the patients underwent a basic neuropsychological assessment with a Mini Mental State Examination (MMSE), which disclosed a severe cognitive impairment (score = 14/30), and a Frontal Assessment Battery (FAB), that showed a marked deficit of frontal lobe functions (score = 5/18). A more detailed neuropsychological evaluation was impossible because of the patient inability to understand the tasks and to maintain an adequate attention.

On the basis of the above-mentioned features, a diagnosis of Marchiafava-Bignami disease was made.

Because of the history of alcohol abuse, a diagnosis of Wernicke Encephalopathy was initially considered but excluded on the basis of clinical and MRI findings. The same applied to the hypothesis of an alcohol withdrawal syndrome. Similarly, other diseases involving the corpus callosum, such as multiple sclerosis, encephalitis, lymphoma, infarction or solid tumors were not substantiated by the history, clinical features and clinical findings.

On admission, the patient was promptly treated with parenteral thiamine (300 mg/day), hydration and parenteral nutrition with vitamin supplement, so the electrolyte balance was quickly restored. We did not use steroid therapy. Three days after hospitalization the patient was started on a physical therapy program. The program started with Early Active Mobilization Protocol; gradually the rehabilitation program included also the Frenkel and Rhythmic Stabilization Exercises.

Seven to ten days after admission, we noticed a progressive improvement of the ideomotor performance. The patient was able to walk slowly without support. He was more ready to interact with the medical and nursing staff. He continued being disoriented in space and time, but there were no clear signs of hemispheric disconnection. Two weeks later admission, the patient underwent to brain TC as a control, without significant changes. After 25 days in the neurological ward, his conditions were such to allow him to be discharged, in the context of a rehabilitative program. At the release, the neurocognitive performance were slight better, although a complete evaluation was not possible (MMSE: 15/30, FAB 7/18).

Six month later his clinical conditions were stable: He lived in a nursing home, depending on the activities of daily living; his relatives rejected additional follow up investigations.

MBD is characterized by a degenerative lesion of the corpus callosum, probably related to deficiency of nutritional factors [3]. It is considered a form of toxic demyelination seen in alcoholic patients, especially males between 40 and 60 years of age. MBD was observed in persons of all ethnic groups and drinking any type of alcoholic beverage, and even in rare nonalcoholic patients [4,5].

MBD can present in two main clinical forms according to Heinrich’s classification:

Type A, with impairment of consciousness, seizures, hemiparesis, poor prognosis and T2W hyperintense swelling of the entire corpus callosum, sometimes with extracallosal lesions;

Neuroimaging can help in diagnosis and staging of MBD. In the acute phase, related to cellular damage and cytotoxic edema, MRI lesions are located across the corpus callosum (body and genu, then splenium), hypointense in T1 and hyperintense in T2 sequences, with restricted diffusion in DWI without a mass effect and rarely they may have contrast enhancement. Occasionally, similar lesions can involve other areas, such as anterior and posterior commissures, brachium pontis [8], optic chiasm, putamen [9], and frontal cortex [1,10]. In the chronic phase, because of the progression of demyelinating process, it possible to observe necrotic and cystic areas, haemosiderin stores, atrophy of corpus callosum [11,12].

Each imaging profile has been associated with a given clinical and prognostic evolution. A partial lesion of corpus callosum would imply a chronic disease, with variable cognitive recovery, and a survival in the order of years. A complete injury to the corpus callosum, together with extracallosal lesions, would rather imply an aggressive course, with poor outcome [1].

In our patient an early MRI showed a partial involvement of the corpus callosum, described as favorable sign, and cortical lesions, related to severe disease and poor outcome. We hypothesize that a prompt therapy can be efficient to stop the demyelinating process and, subsequently, the disease progression.

MRI imaging, alone, albeit very useful in the diagnostic process, cannot be considerate an infallible predictor of outcome; it need to be evaluate with the type of onset and the clinical course.