Most of cognitive disorders are masked by symptoms they have in common with many others human illnesses like influenza and headache. Prevention appears unavoidable and, monitoring their evolution may help to reduce incidence of major brains disorders. In this goal, an observational research was leaded in a call center sample, to evaluate the distribution and the evolution of cognitive impairments and mood disorders. Demographic and clinical data, insomnia and sleeps disorders, drugs usage associated with cognitive decline, gender, level of education, family medical history, depression and anxiety were collected. Correlation was found between time of work and cognitive decline, depression and time of work, sleep disorders and cognitive complaints.

*The most recent research describing the effect of environment on mental health of workers.

*The most recent study showing a stratification of cognitive dysfunction in a representative sample.

Mental health is strongly affected by all the interactions between human brain and his environment. This interaction induced since youthness, a fragile regular balance. Any dysfunction in this process can lead to a decline or a damage of the brain structures and the development of the central nervous system. Indeed, most of the cognitive disorders are created by a failure in the cognitive natural processing. And the environment certainly contributes with variant stimuli, to the decline of cognitive function if they are not appropriate, controlled and suitable with general state of the participant body. Literature has showed that synaptic networks essential to information processing for an adult brain structure are primarily affected by environmental interactions beginning at the birth until the end of puberty. This same literature also demonstrated that lifestyle factors like regular good quality of sleep and physical activities, during the whole life, have major effect on the prevention of neurodegenerative diseases and an impaired brain health [1-3]. Literature also showed that both peripheral and central nervous system disorders, has a high probability to appears if the environment is full of aggressive sensory stimulus and complex combination [4-6]. Recent research showed that, deep evaluation and control of complex combination of these risk factors are the keys for prevention of the mental illness. Even if participants made physical activities and has a good sleep duration which are important shield for prevention [4,7-10], many others risk factors like environment of work in call centers; has potential negative impact on cognitive performance. But a repartition of cognitive decline is to our knowledge, not define yet for a sample exposed to this kind of environment. The aim of the present research is to explore how cognitive disorders are distributed in a representative population exposed all day to auditory and visual stimulation with multitasks events.

This research article was approved by, the ethic committee of research on human of the University of Montreal, Canada. All our subjects were volunteers and signed a consenting form, and were all recruited through customer services unit of few call centers.

Participant information like age, language, education, history of drugs, drugs associated with cognitive impairments, gender, and family medical history. Cognitive measures were collected with the French version of the Mental Health Profile of Etindele Questionnaire (MHPEQ) including subscales related to sleep disorders, depression, physical activity, cognitive decline, suicidal behavior, medical history of the patient and his family, anxiety and sociodemographic information of the subject. This questionnaire is a new Canadian tool for mental illness diagnosis, used in many previous studies [11-14].

The normal distribution of cognitive parameters was analyzed using the Kolmogorov-Smirnov’s test. To analyse Mc Nair test results, scores were converted to a dichotomous variable. All participants with a score fewer than 15 were scored “No cognitive complaints“ vs whose score is more than or equal to 15 were scored “Presence of cognitive complaints”. Spearman rank was used to analyse the relationship between the continuous variables general health, stress, dependency, well-being and Mc Nair score. Mann-Whitney’s nonparametric test for independent samples was employed to compare Mc Nair score as a continuous variable between two groups. Kruskal Wallis test was used for comparing Mc Nair score for more than two groups. Logistic regression was carried out to assess the relationships between Mc Nair’s score as a dependent variable and sleep parameters as independent variables. Statistical tests used an alpha of 0.05 as a level of significance. Data analysis was performed using PRISM (Graph Pad Prism, version 7.0.0.159, Graph pad software).

1000 subjects were used in the current investigation. The response to the questionnaire was 100%. In the survey population, 73% were in the young adults group aged between 20 and 30 years, an expect proportion. Women represented 66% of the sample. 62% of the respondents (n=620) are students in the first cycle of the University. Figure 1 represented evolution of clinical parameters of the total cohort. In the analysis of family history’s disease, 38% (n=380) suffered from cardiovascular disease and 14% (n=140) suffered from neurologic disease. 52% (n=520) of family members have a cognitive impairment and 24% (n=240) suffered from Alzheimer. 24% (n=240) of respondents were treated from cardiovascular disease; 24% (n=240) suffered from musculoskeletal disease; 5% (n=50) used medication for neurologic disease and 1% (n=10) has a respiratory problem. All clinical parameters were associated with Mc Nair score (p<0.0001, Kruskal Wallis test) except for the use of cognitive or memory impairment drugs (p=0.735, U Mann-Whitney test). The analysis of depression and anxiety showed that 75% (n=750) of the participants have a normal depression but 56% (n=560) has a moderate anxiety. The mean well-being score was 12 ± 0.7 (SD) with a good correlation with Mc Nair score (p<0.0001, Spearman rank). The mean dependency score was 11 ± 1.04 (SD), based on Spearman rank it’s associated with Mc Nair score (p=0.00043). However, there was no correlation between general health score, stress score and Mc Nair score (p=0.0584, p=0.419 respectively with Spearman rank test) (Figure 1). 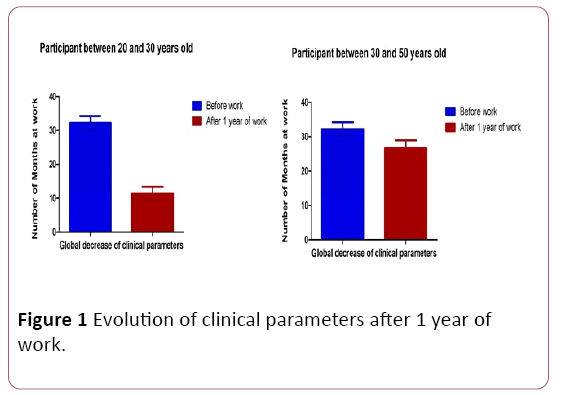 Figure 1: Evolution of clinical parameters after 1 year of work.

Figure 2 shows evolution of cognitive impairments and sleep disorders. The logistic regression was performed on uncorrelated variables to identify the best predictors for cognitive decline. Multicollinearity was detected between the following variables: quality of sleep, changes in medication, anxiety and insomnia. Logistic regression analysis revealed that 36% of the variance in cognitive impairments was explained by duration of sleep, duration of medication, sleep quality and difficulty insomnia. The model was significant (p<0.05). The variable sleep quality was the least significant factor in the model (Wald statistic=42.66, p-value <0.00037) and duration of medication the most significant (Wald statistic=104.97, pvalue< 0.00018). Sleep time (Wald statistic=77.8, p-value <0.0001), duration of medication between one and six months (p-value<0.0023 vs 6 months-1 year, p=0.0998), no insomnia (Wald statistic=86, p-value=0.0071) or have an insomnia (pvalue <0.000 vs a little insomnia, p-value=0.436), mild subjective sleep satisfaction (p-value <0.00023) were associated with cognitive impairments. The risk ratio (RR) of suffering from cognitive complaints is 0.31 for participants who sleep four hours relative to those who sleep more than eight hours. The risk of suffering from cognitive impairment for participants, who are under medication between one and six months or more than six months, is 1.75 more than respondents under medication more than one year. The risk of a participant with a mild sleep quality getting cognitive problems is about 0.83 times the risk of a participant with a very well sleep quality getting cognitive problems. The risk to suffer from cognitive difficulties for participants who have no difficulty or a difficult of falling asleep is 1.93 and 1.25 respectively more for participants who have a very high proportion of insomnia or sleep disorders events (Figure 2).

Figure 3 shows correlation between depression score and time of work of the global population (without division of age). The method of calculation of this depression score was based on a previous study [11]. This would suggest that levels of difficulty of falling asleep being considered are associated with an increase in risk. These findings are consistent with other studies in which cognitive complaints are shown, related to their impact on clinical outcomes [2-4,11-15].

Figure 3: Correlation between depression score and time of work.

This would suggest that the fact to have no difficulty of falling asleep is associated with an increase in risk. This finding is not consistent with studies in which cognitive complaints were shown as associated with difficulty of falling asleep [16]. Further, the result reported in Figure 1 showed that participants suffering from cognitive complaints reported sleep disorders, and many of them or their family’s members has suffered from other diseases than cardiovascular, neurologic, respiratory, or musculoskeletal in addition to a memory deficiency and the participant suffered from musculoskeletal disease (Figure 3).

These results agree with authors who found a positive association between physiological disorders and cognitive complaints [17-21]. People executing daily multitask, stimulated often intensively and negatively their sensory system. And if these individuals are anxious, and at least a minimum depressive; cognitive performance strongly declined. At the same time, our results confirm the role play by environment in the brain failure; because we determined here the proportion of cognitive decline (according to the results of each participant in the McNair test). Many studies reported negative effects of pathological factors like obesity, on cognitive function [12,21-26]. But there are just few of them which observed deeply their simultaneous actions combined with environmental stimulus. It has been established that reduces psychological stress, decreased cognitive decline [2,4,14]. According to our results, evaluation of brain performance while controlling mood disorders (anxiety, depression, well-being and psychological stress) may lead to a sensitive and accurate model of prediction.

More serious studies should be done to explore more which side effects; an environment of work can have on the mental health of employees. The present paper confirms implication of stress and certain environment, on the general clinical status of people, as well as their mental health. It is the first of a series of upcoming other research on the same topic, with a deeper investigation on correlation between socio demographic profile of employees; and the prevalence of their diagnosis on sleep disorders as well as cognitive failure.

Thanks to Doctor Amine El Mimouni for his critical feedback and suggestions in this study, and Dr. Spencer for his NIH grant EY06562.