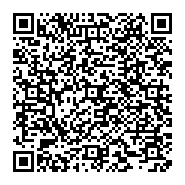 Nilanjana P, Anirban B, Susmita B and Dipak G*

Objective: The objective of this work is to formulate biomarkers based on visibility graph technique for early detection of sudden cardiac arrests.

Background: Sudden cardiac arrest is a serious medical condition claiming numerous lives across the globe. The fact that in most cases the victim succumbs to death within an hour of the onset of symptoms itself indicates the dreadful nature of the disease. This very fact has prompted us to analyze an ECG waveform using a chaos based non-linear technique viz. visibility graph technique.

Method: The visibility graph algorithm has been used to convert the ECG time series data into visibility graphs and then calculate power of scale-freeness in visibility graph (PSVG) values at an interval of one minute across the time series. Subsequently, comparative analysis of PSVG values has been carried out between diseased and normal subjects.

Conclusion: The analysis leads to formulation of biomarkers which may be used to detect abnormalities of the human heart sufficiently ahead of the time before it turns out to be fatal.

Sudden Cardiac Arrest (SCA) is a medical condition which occurs due to arrhythmia of the heart causing it to stop effectively pumping blood to the brain and body. The fallout is almost immediate as the victim succumbs to death often within an hour of the onset of the symptoms [1]. What makes SCA further dangerous is the fact that it can affect a person who appears to be healthy and is not suffering from a cardiac ailment [2]. However, people with some sort of coronary disorder are at a higher risk of SCA.

An implantable cardioverter defibrillator (ICD) is useful to restore normal heart beat in patients who have suffered ventricular tachycardia or fibrillation. Though ventricular fibrillation is the major cause of sudden cardiac arrests, there are other causes of SCA as well. Moreover, protection against sudden cardiac death by ICD implantation is invasive and expensive, and therefore target patients must be selected with very high predictive accuracy [1].

An entirely different approach towards early diagnosis of cardiac dysfunction has gained sufficient momentum which involves studying ECG signals of the heart using fractal analysis [3,4]. In the realm of SCA, fractal analysis of heart rate variability has been used to predict cardiac mortality [5]. In earlier works [6], using detrended fluctuation analysis technique, scaling exponents have been calculated to predict both arrhythmic mortality and the spontaneous onset of lifethreatening arrhythmias.

In this paper, we have applied the visibility graph technique [7,8] for a quantitative assessment of cardiac dysfunction in the event of SCA, and analysis of the observed results has led to some interesting finding, which might lead to a clinical tool for risk management. The paper is organized in the following manner. In section 2 the methods describing the analysis techniques in the context of chaos theory are summarized. Section 3 provides the description and source of the data as well as the analysis done on them and the summary of the results. The paper wraps up with a discussion and conclusion in section 4.

Mandlebrot [9] introduced the concept of fractals. A fractal is a never ending pattern that repeats itself at different scales and exhibits a property called “self-similarity”. Fractals are observed all around us, with different scaling factors; from the tiny branching of our blood vessels and neurons to the branching of trees, lightning bolts, and river networks. Regardless of scale, these patterns are all formed by repeating a simple branching process. Any particular region of a fractal looks very similar to the entire region though not necessarily identical. The calculation of fractal dimension for measuring self-similarity is a significant area in the study of chaos. Following are the various methods proposed for measuring fractal dimension (FD):

• The latest addition being PSVG or power of scale-freeness of a visibility graph.

As shown in Figure 1, Xm and Xn can see each other, if the above condition is satisfied. With this logic two sequential points of the time series can always see each other hence all sequential nodes are connected together. The time series should be mapped to positive planes as the above algorithm is valid for positive values in the time series. The degree of a node in a graph is defined as the number of edges with the other nodes of the graph. P(k) or the degree distribution of the overall network formed from the time series is thereby the fraction of nodes with degree k in the network. Thus, if there are a total of n nodes in the network and nk of them have degree k, then P(k) = nk/n. Two quantities satisfy the power law when one quantity varies as a power of another. The scalefreeness property of a Visibility graph states that the degree distribution of its nodes satisfies the power law i.e. P(k) = k-λ, where λ is a constant and it is known as PSVG. PSVG, denoted by λ here, which is calculated as the gradient of log2P(k) vs log21/k, corresponds to the amount of complexity and fractal nature of the time series indicating Fractal Dimension FD of the signal [7,8]. Ahmadlou et al. applied the visibility graph algorithm to convert time series to graphs, while preserving the dynamic characteristics such as complexity [11]. It is also proved that there exists a linear relationship between the PSVG λ and the Hurst exponent H of the associated time series [7]. The visibility algorithm therefore provides an alternative method of computing the Hurst exponent. Also it has been shown, for example, that gait cycle (the stride interval in human walking rhythm) is a physiological signal that displays fractal dynamics and long-range correlations in healthy young adults. The algorithm of visibility graph predicts gait dynamics in slow pace, in perfect agreement with previous results based on the usual method of de-trended fluctuation analysis [7]. As the visibility graph is an algorithm that maps a time series into a graph, the methods of complex network analysis can also be applied to characterize a time series from a brand new viewpoint. Graph theory techniques can also provide an alternative method of quantifying long-range dependence and fractal nature in time series. Each pattern and behavior in a fractal time series is repeated frequently, in different scales, which has been proved by Ahmadlou et al. for a visibility graph, by calculating the PSVGs of a time series in multiple scales [12]. 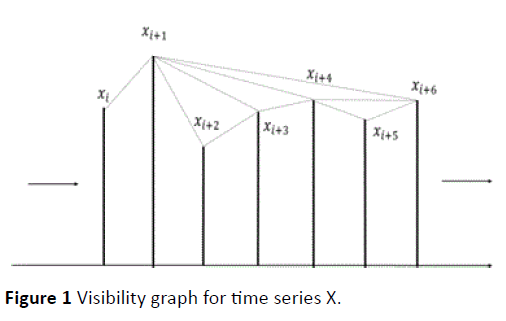 Data from two Physionet databases [13,14] have been used for analysis. The detailed description of the data is available on the website. The former database contains 23 complete Holter recordings for subjects experiencing sudden cardiac arrests while the latter contains 18 long-term ECG recordings of subjects having no significant arrhythmias. The naming conventions for the data followed in the subsequent texts of this paper are as per the website.

The ECG data from diseased and normal subjects have been split in a manner such that each split spans approximately one minute of the ECG time series and consists of 10,000 data points being sampled across the span of a split.

With 10,000 data points the visibility graph of a split is constructed.

For each Visibility Graph, the value of P(k) is calculated for each of the values of k as described in Section 2. The variation of P(k) against k is found to satisfy the power law as shown in the Figure 2 (for a particular subject). 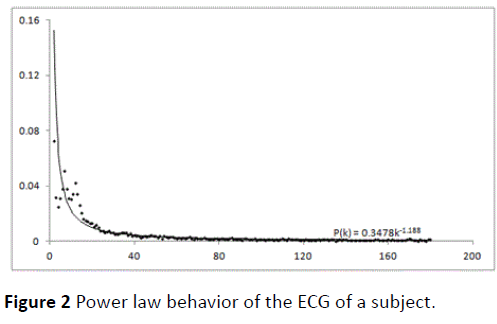 Figure 2 Power law behavior of the ECG of a subject.

The plot of log2P(k) vs log21/k is a straight line and, the gradient of the graph is the PSVG (Figure 3). 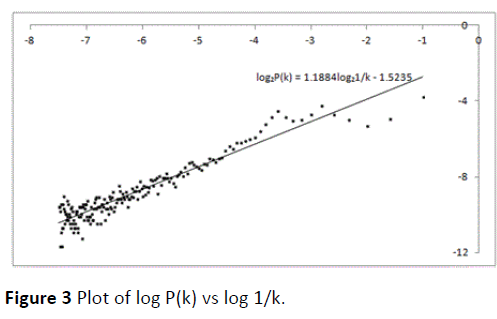 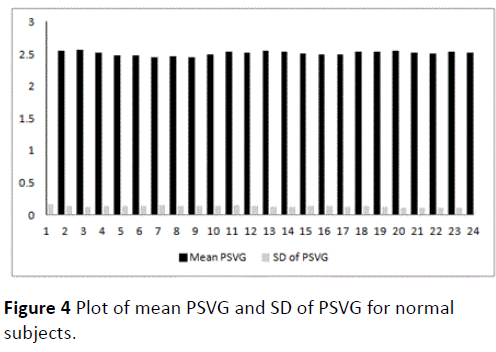 Figure 4 Plot of mean PSVG and SD of PSVG for normal subjects. 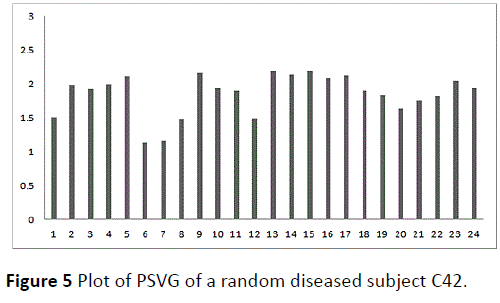 Figure 5 Plot of PSVG of a random diseased subject C42. 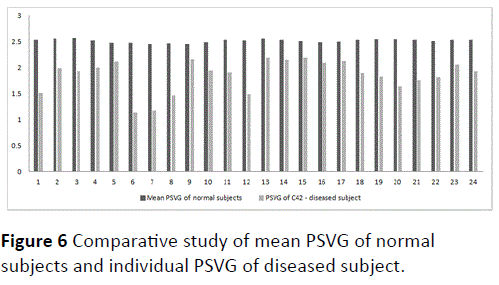 A number of interesting observations are obtained after the analysis as described below.

The comparative plot of values of mean PSVG for normal subjects and that of diseased subjects for 12 hours at an interval of ½ hour (Figure 7) reveals lower PSVG values for a diseased heart than that for a normal heart. The deviation of PSVG values of the affected patients from normal PSVG values remains within the range of 0.1 to 0.2 for the first 8 hours and henceforth becomes sharp with the PSVG shift going as high as 0.35 at a later point of time. Figure 7 Comparison of mean PSVG between diseased and normal subjects.

Following parameters are obtained from the Visibility Network Graph analysis:

The 3rd 1/2-hour probe gives an indication of a major dysfunction, which can be used to trigger an initial alarm. This gets pronounced at the 6th, 9th and 11th hours. There is a huge spike at the 11th hour indicating a serious medical condition.

This principle may be put to use for early detection of cardiac disorder in patients suffering from sudden cardiac arrest.

The fact that heart beat is chaotic enables us to analyze it using non-linear techniques e.g. visibility graph method. This analysis leads to formulation of certain parameters or biomarkers which may be used to detect abnormalities of the human heart sufficiently ahead of the time before it turns out to be fatal.

Initially, the software to compute and compare PSVG values may be used to detect onset of sudden cardiac arrest in hospitalized patients who are under ECG surveillance. As PSVG values start falling indicating a possible cardiac arrest, remedial action can be taken well before the dysfunction takes a fatal turn.

Eventually mobile apps may be prepared to compute the bio markers on a real time basis. The app will read data from an implanted loop recorder [16], compute PSVG and compare it with a benchmark PSVG preloaded for a healthy heart. Whenever the computed PSVG overshoots/ falls below the preloaded healthy PSVG by a pre-defined tolerance value, some audio visual markers will alert the individual of the impending cardiac disorder.

We thank the Department of Higher Education, Govt. of West Bengal, India for providing us the computational facilities to carry on this work.