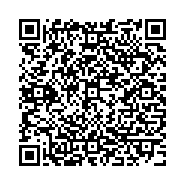 Background: Lyme borreliosis is a worldwide zoonosis caused by the spirochete Borrelia burgdorferi, which is transmitted by a tick bite, primarily from Ixodes scapularis and Ixodes pacificus. In Egypt, few articles reported the existence of Lyme disease in humans and animals. The aim of the current study is to investigate the presence of B. burgdorferi in dogs, ticks and contact human cases in Egypt.

Methods and Findings: A total of 100 samples of dogs (70), contact human (15) and ticks (15) were collected and subjected for culture, PCR and/or IgM ELISA. 50/70 (71.4%) of canine sera were sero-reactive, while 3/15 (20%) in human cases were reactive. OspA gene was detected in the blood of 13 out of 70 dogs (18.5%). 6/15 (4%) ticks (Rhipicephalus sanguineus) that collected from dogs contained the ospA gene, while none of human blood samples was positive by PCR. None of the investigated samples give positive results for B. burgdorferi by culture.

Conclusions: This study confirms the occurrence of B. burgdorferi infection in Egyptian dogs in which the only identified tick species is Rhipicephalus sanguineus.

Lyme disease, an Ixodes spp. tick-associated zoonosis caused by Borrelia burgdorferi, causes significant morbidity in humans and dogs [1]. Infected dogs may develop fever, anorexia, fatigue, renal failure and most commonly limb and joint disorders [2]. Several animal species can be infected by B. burgdorferi spirochete, including rodents, deer, dogs, cats, cows, horses, reptiles and birds, and since tick species could infest such animals [3], however, dogs are considered the most important reservoir for ticks in the home environment [4]. In Egypt, available data about the incidence and prevalence of Lyme disease are scarce [5]. Few old and recent studies have pointed out the evidence of occurrence of B. burgdorferi in animals, ticks and humans [6-8]. The aim of the current study is to detect B. burgdorferi in dogs, tick reservoirs and human contacts by isolation of the pathogen in a specific medium, BSK-H, detection of its DNA by PCR and investigate the specific IgM-ELISA in sera of dogs and companion humans.

One drop of whole blood or gut contents of the collected ticks was inoculated into 2-3 tubes containing BSK-H medium (Sigma Co., St. Louis, MO). All the inoculated tubes were incubated at 33°C for up to 8 weeks under a microaerophilic condition. Cultures were being examined weekly under the dark-field microscope to observe the characteristic morphology and motility of B. burgdorferi indicating the viability of the pathogen [9]. DNA extraction from whole blood: Total genomic DNA was extracted from whole blood using QIAamp® DNA blood Mini kit (Qiagen, Valencia, CA) as per manufacturer's instructions.

Briefly, tick specimens were cleaned by sonication for 3-5 minutes in ethanol and then washed twice in sterile distilled water. Afterwards, individual tick specimens were divided into pieces, placed in a microcentrifuge tube filled with 180 μL lysing buffer solution supplied in the Kit and then homogenized with a sterile tissue grinder. The homogenate was centrifuged at room temperature and the supernatant was further processed and DNA was extracted by using QIAamp® DNA Mini kit (Qiagen, Valencia, CA) in accordance with manufacturer’s instructions.

DNA extracted from blood and tick specimens as well as the positive control, B. burg

dorferi B31 (ATCC# 35210) and negative control, Leptospira interrogans serovar Icterohaemorrhagiae (NVSL# 17) were used as template for PCR amplification. A specific primer sequence targeted OspA gene of B. burgdorferi sensu lato was used which was 5′-AATGTTAGCAGCCTTGACGAGAA-3′ and 5′-GATCGTACTTGCCGTCTTTGTTT-3′ [10]. All PCR reagents and Taq polymerase were obtained and used as recommended by the supplier (Sigma Co., St. Louis, MO). Briefly, a total of 0.2 μmol of the appropriate primers and various amounts of template DNA were used in each 50 μL reaction mixture. The PCR amplification was performed with a programmable thermocycler for 35 cycles with denaturation at 94°C for 1 minute, annealing at 55°C for 1 minute, and extension at 72°C for 1 minute. Amplified DNA products were electrophoresed in 2% agarose gels in Tris-Borate-EDTA (TBE) buffer and visualized under ultraviolet (UV) light after staining with ethidium bromide. DNA marker (100-1000 bp) was obtained from Stratagen Co., USA, Cat. No. 201115. It was used for detection of the expected size of the target genes at 309 bp (Figure 1). 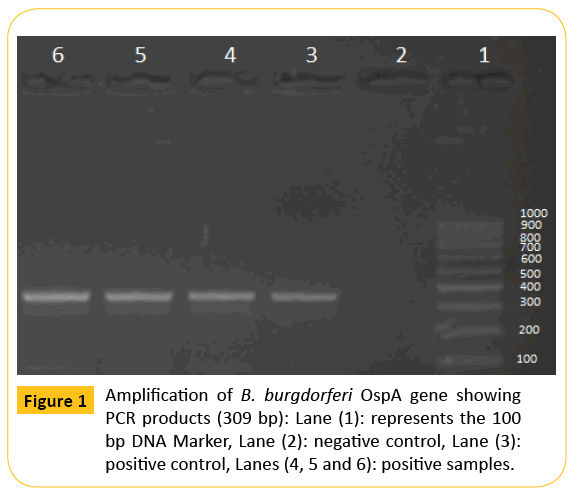 None of the dogs, ticks or human samples showed recovery for B. burgdorferi.

Lyme borreliosis is a worldwide zoonotic disease caused by the spirochete Borrelia burgdorferi, which is transmitted by a tick bite, primarily from Ixodes scapularis and Ixodes pacificus. It is characterized by multi-systemic disorders

In Egypt, Lyme disease has been recently reported in animals and transmitted by tick species out of family Ixodidae, Rhipicephalus sanguineus [8]. This finding was confirmed in the current study as we could detect the specific ospA gene of B. burgdorferi in 4% of the collected ticks.

Herein the current study, B. burgdorferi could not be recovered from the given samples when cultured in BSK-H medium. Although culture is the gold standard diagnostic test, isolation of B. burgdorferi is labor-intensive, more expensive, and much slower, requiring up to 12 weeks of incubation before being considered negative [7,11] and this makes culturing as a lower feasible method.

This information is useful and may be of epidemiological value in monitoring the circulation of such pathogen, determining potential zoonotic risk and implementing prevention and intervention measures like vaccination and control programs which are not applied in Egypt.

It is also important to increase awareness about Lyme borreliosis among veterinarians and physicians in Egypt and to strengthen laboratory capacity for its diagnosis in veterinary and infectious hospitals.