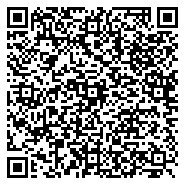 UTIs have been implicated as the most common bacterial infections in clinical practices and accounts one-third of all nosocomial infections. The development of resistances among uropathogens is a major crisis which restricts drug of choice for the treatment. Hitherto, the prevalence, etiological profile and antibiotic susceptibility pattern of bacterial uropathogens from the study area is not investigated. In this regard, a prospective study was conducted in adult patients clinically suspected to have urinary tract infection who consulted at the Internal Medicine Unit of Arba Minch Hospital from January- September 2015. In this study, prevalence of uropathogenic bacteria was reported among 37.2% of the study participants. The uropathogenic isolates were identified and grouped into seven species including Escherichia coli, Staphylococcus aureus, Klebsiella pneumoniae, Coagulase negative Staphylococcus (CNS), Citrobacter sp., Enterococcus faecalis and Proteus mirabilis. To demonstrate the antimicrobial susceptibility profile, all uropathogenic isolates were subjected to antibiotic sensitivity test against nine antibiotics. The results evinced that majority of the uropathogens were resistant to ampicillin, penicillin, amoxicillin, tetracycline and erythromycin, annulling its empirical usage. Ciprofloxacin is found to be effective against both groups of uropathogens. For the vigilant selection of antibiotics, further judicial study emphasizing the mechanism of antibiosis is warranted.

Infections of urinary tract are implicated as one of the severe public health problems that impose high morbidity and mortality as well as severe economic consequences Worldwide [1].It is the most common bacterial infection in clinical practices and accounts one-third of all nosocomial infections [2]. Infections of urinary tract (UTIs) manifest a spectrum of severity that ranging from mild self-limiting infection to life-threatening systemic disease. Globally, 250 million people are affected per year and estimated 300 million people are at risk [2]. The frequency of UTIs depends on many risk factors such as diabetes mellitus, advanced age, urinary tract obstructions, immune-suppression, and neurological disorders [3]. Albeit a wide variety of causative agents were adduced with UTIs, the most common pathogens are E. coli, K. pneumoniae, P. mirabilis, E. faecalis and S. saprophyticus [4]. During the last decades there has been a tremendous increase in the reports pertaining to the antibiotic resistance of UTIs causing bacteria worldwide. It is envisaged that causative agents for UTIs and its susceptibility pattern can diverge according the geographical, social and biological status [5]. Prompt diagnostic and culture facilities are not available in many parts of developing countries. And this may leads to incorrect diagnosis or self-medication whereupon causes the development of antimicrobial resistance among uropathogens [6]. Therefore, the selection of empiric antibiotic therapy for UTIs should be based on the institutional susceptibility profiles of the causative bacteria.

Details of the study area and participants

A prospective study was conducted in adult patients clinically suspected to have urinary tract infection who consulted at the Internal Medicine Unit of Arba Minch Hospital (AMH) during the period of 8 months (from January 2015 to September 2015). The inclusion criteria for the study participants was all adult patients with the UTI visited at AMH during the above study period. The exclusion criteria for the study participants were 1) Those who were underwent antibiotic treatment during the time of specimen collection or for the last one week, 2) patients who were admitted to Internal Medicine ward for more than 48 hours, 3) who were declined to participate, 4) age less than 15 were excluded from the study.

Prior to the specimen and data collection, the purpose of the study was explained to all respondents and informed consent was obtained from all participants. The study has been approved by the Ethical Review Board of Arba Minch University.

Sampling and isolation of uropathogenic bacteria

The first voided midstream urine samples were collected in sterile wide mouth disposable containers (5 ml) from 129 adult subjects (15-55 years old). Only one sample per patient was sourced. Collected samples were labeled and immediately transported to the laboratory following appropriate safety precautions and SOPs (Standard operating procedures) as described elsewhere [9]. The urine culture and antibiotic sensitivity tests were performed in our Microbiology and Parasitology Laboratory, Department of Medical Laboratory Science, College of Medicine and Health Sciences, Arba Minch University. The processing and culture of urine was performed within 1 hr of sampling. Urine samples were inoculated using a calibrated inoculation needle onto various isolation media such as 5% blood agar, MacConkey, and Manitol Salt Agar (MSA) agar (Oxoid Ltd, Bashingstore, Hampire, UK). Subsequently, plates were incubated in both aerobic and anaerobic conditions for 24 to 48 hours at 37°C. Afterwards, plates were inspected for bacterial growth. The samples that exhibiting significant bacterial growth according to Kass count (single species count of >105 organisms/mL) was considered as positive results for UTI [10]. Only samples with significant bacteriuria (≥105 cfu/ml) were taken up for bacteriological analysis.

All uropathogenic isolates were subjected to antibiotic sensitivity test. Antibiotic sensitivity profile was determined by the Kirby–Bauer disk diffusion method [12] using oxoid antibiotic discs. Nine commercially available antibiotic disks were used with their respective concentrations: [ciprofloxacin (CIP, 5 μg), tetracycline (TE, 30 μg), chloramphenicol (C, 30 μg), erythromycin (E, 15 μg), penicillin (P, 10 μg), gentamicin (CN, 10 μg), trimethoprim-sulfamethoxazole (TMP-SMX, 1.25+23.75 μg), amoxicillin (AML, 30 μg) and ampicillin (AMP, 10 μg) Oxoid, Hampshire, UK]. In brief, the respective bacterial suspensions of 10-fold dilutions were prepared using 18-h fresh shake culture (Tryptic Soy broth) and was inoculated onto the Muller Hinton agar plates to get a lawn concentration of about 1.5 × 106 CFU/cm2. Six disks were dispensed on the seeded lawn at 60O apart from each other. The diameter of inhibition zone around the disks was recorded after incubation at 37°C for 24 h. The reference standard was used for the inspection of isolate sensitivity/resistance pattern. The results of the antimicrobial susceptibility tests were interpreted by following the National Committee for Clinical Laboratory Standards [13]. 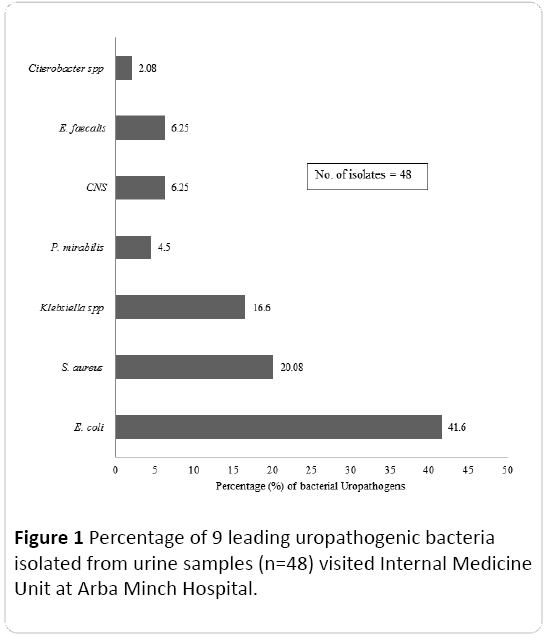 Regarding the Gram positive cocci, 100% of isolates expressed high rank of resistance to amoxicillin, trimethoprim-sulfamethoxazole, ampicillinand penicillin whereas 68.75% of isolates were resistant to tetracycline and gentamicin. Among the resistant Gram positive cocci, 100% of S. aureus displayed resistance to amoxicillin, trimethoprim-sulfamethoxazole, ampicillin and penicillin. Eighty percent of S. aureus exhibited resistant to tetracycline followed by gentamicin (60%) and chloramphenicol (50%).

Worldwide, urinary tract infections (UTIs) are recognized as the most prevalent bacterial infections in human and a major public health concern. It is speculated that nationwide or region-based surveillance of uropathogenic bacterial diversity and its resistance patterns may facilitate the medical practitioners to select the exact empirical therapy [14]. Albeit several studies pertained to UTIs are reported from the various regions of Ethiopia, studies with regards to the same from Arba Minch province is scanty. Thence, in the present study, we delineated the prevalence, diversity and antimicrobial resistance of uropathogenic bacteria isolated from the UTI patients of Arba Minch province. From the present study it was found that overall prevalence rate of UTI was 37.2% during the study period of eight months. Our result is consistent with those of two similar kinds of studies done in other regions of Ethiopia [15,16]. In contrast to our findings, the prevalence rate of UTI was different in two previous studies cited from Ethiopia [4,8]. Its envisaged that prevalence of UTI depend on diverse factors such as geographical area, climate, sex, age, social habit, the presence of urodynamic disorders, compliance with treatments for overactive bladder symptoms, and the immunological status [17]. Among the positive study participants, highest rate of prevalence was observed in females. It’s a universally averred that frequency of UTI is especially high among women due to their reproductive physiology [18]. Howbeit, no correlation was observed between culture positivity and age of UTI patients. The prevalence of UTI was more or less uniform in all age groups.

For the effective management and treatment of urinary tract infections, elucidating the diversity of uropathogens as well as drug resistance pattern is pivotal.The percentage and diversity of uropathogenic bacterial isolates observed in the present study is concordance with the previous literatures [4,7]. Of the diverse uropathogens isolated, Gram negative bacilli were the predominant group. It is a known fact that Gram-negative isolates are the most prominent uropathogens compared to Gram-positive isolates. Amongst the Gram positive bacilli, E. coli was the most prevalent isolates in the urine samples. In accordance to our study, similar pattern of prevalence was noted in Ethiopia [15,16,19] and other locales of the World [20,21]. Moreover, globally E. coli is envisaged to cause 70-95% upper and lower UTIs [22]. The second most prevalent isolates amongst the Gram positive bacilli was K. pneumoniae [4]. Among the Gram positive cocci, S. aureus was the most frequently isolated uropathogens. Moges et al. [16] opined high prevalence of S. aureus in the urine samples collected from other region of Ethiopia. The present study has few limitations such as small sample size and mixed population. Therefore, the results are generalizable.

The development of resistances among uropathogens to multiple drugs is a major crisis which restricts drug of choice for the treatment of UTI.In the present study, the pattern of antibiotic resistance of uropathogenic isolates against commonly prescribed empirically antibiotics was explored. Of the Gram negative bacilli, E. coli isolates exhibited high rank of resistance against ampicillin, and tetracycline, annulling its empirical usage.The similar trend of resistant was observed in other studies conducted at Ethiopia and India [15,21]. Howbeit, rate of resistance was lower in another study done at Ethiopia [8]. The high rank of resistance could be due to the overuse/self-prescription of these antibiotics in our study area.Apart from E. coli, other Gram negative bacilli such as K. pneumoniae and P. mirabilis were also exhibited resistance against trimethoprim-sulfamethoxazole, ampicillin and chloramphenicol which well-nigh resembled with other reports [8,15]. In general, Gram negative bacilli were susceptible to the ciprofloxacin and gentamicin. Based on this result, it could be inferred that antibiotics such as ciprofloxacin and gentamicin might be useful for the management of Gram negative uropathogens in the study area. In the case of Gram positive cocci, it was evidenced that S. aureus were more resistance than other two species. It displayed a high rank of resistance against tetracycline, ampicillin, amoxicillin and penicillin which is comparable to another study conducted at Ethiopia [15]. Gram positive cocci showed sensitivity to ciprofloxacin. Thence, overall results of present study could be useful to improve therapeutic tactics of uropathogens in the study area.