Introduction: Guillain Barre Syndrome (GBS) is an acute and mix demyelinating polyneuro-radiculopathy of autoimmune cause. It produces a flaccid autoimmune paralysis. There is a consensus that the course is monophasic, nevertheless some authors have showed that it could repeat in the 3-5% of affected cases.

Results and Discussion: Spinal brain fluid study showed marked increase of the protein level, the rest of the laboratory studies were normal. Neurophysiologic evaluation was accordance with sensory-motor polyneuro-radiculopathy with motor predominance. We observed most abnormalities of electrophysiological parameters and proteins in spinal brain fluid in this episode in comparison with the first episode.

Conclusion: GBS recurrence is rare, but it can happen, generally there is a prolonged period of time between episodes. Symptoms and signs are similar but electrophysiological and lab parameters could be more affected in recurrent episodes.

Guillain Barre Syndrome (GBS) is an acute autoimmune, inflammatory and demyelinating neuropathy of monophasic course that cause a flaccid paralysis. It appears frequently as post-infection diseases in relation with Campylobacter jejuni, Cytomegalovirus, Ebstein-Bar virus and Mycoplasma pneumoniae; in other occasions it is in relation with some conditions as such as: pregnancy, delivery, surgeries and anesthesia [1,2]. GBS is considered the most frequent acute neuropathy, the evolution is rapid and potentially fatal [2]. GBS incidence has been reported between 1.8-2/100 000 inhabitants per year, mortality is 3-15% and 20% of the patients could show some handicap [2-4].

The typical cases are characterized by symmetric muscle weakness that could extend to respiratory muscles and patients could die. Other signs are: diminish of tendon reflex, abnormalities of autonomic function; pain, cramps, and numbness. The maxim peak of the disease is reached at 2-4 weeks and them it is stabilized to reach the plateau phase; the duration is variable and after that recuperation phase is started. There is an elevation of the protein in cerebrospinal fluid in high percent of affected patients [1,4].

GBS diagnosis is based the Asbury criteria, that includes: clinical signs, cerebrospinal fluid finding and neurophysiological studies [1,5]. Although there is a consensus of the monophasic course of GBS, some authors affirm that it could appear of recurrent form in 3-5% of the affected cases. There are few bibliographic reports of this aspect, there are only report of isolated cases [5]. We present a case of GBS with recurrent appearance that started 17 years after the first episode. It is the only case with recurrent appearance of 50 cases of GBS that we have followed for 18 years.

We present a case of a female patient who was admitted in intensive care of “Carlos J. Finlay” hospital, in La Habana, Cuba with the diagnosis of recurrent GBS. The day of the admission some laboratory tests were done to her: cerebrospinal fluid, hematologic study, hemochemistry, ionogram, gasometry and urine tests.

Neurophysiologic evaluation was done in the department of Clinic Neurophysiologist of Cuban Neuroscience Center, Neuronica 5 equipment, of Neuronic SA was used for this object. Motor and sensory nerve conduction of median, cubital, deep peroneal, posterior tibial and sural nerves were done; F wave of median and posterior tibial was done too, conventional technical parameters were used for those studies.

Informed consent was given us from the patient, institution ethical committee approved this study and there was no interest conflict between authors.

History of the patient: The patient is a white female whose age is 48-years. In 2001, when she was 32 years old, 13 days after her delivery; she started with clinic symptoms that were interpreted as GBS, in this occasion she needed to be admitted at the hospital for 20 days, human immunoglobulin was applied (0.4 g/kg IV daily for 5 days), vitamins and rehabilitator treatment were applied too. This episode didn´t provoke disability, patient was asymptomatic till the date.

Parameters of neurophysiological study that was done in 2001 were conserved (Figures 1-5), at that time cerebrospinal fluid study showed: Protein-1 g/l and cells 0. At the beginning of December of 2017 patient started with weakness in both hands, the next day lumbar pain and weakness of both legs were added, she could not stand, at third day she went to the hospital where she was admitted. There was no antecedent of respiratory or digestive symptoms before neurologic symptoms. 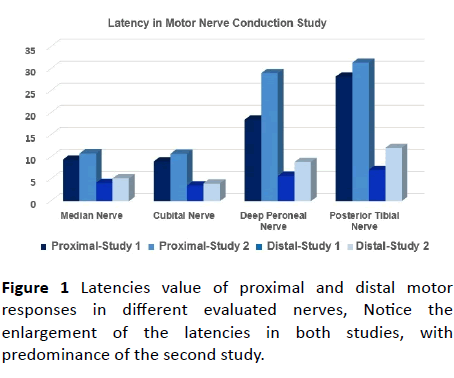 Figure 1 Latencies value of proximal and distal motor responses in different evaluated nerves, Notice the enlargement of the latencies in both studies, with predominance of the second study. 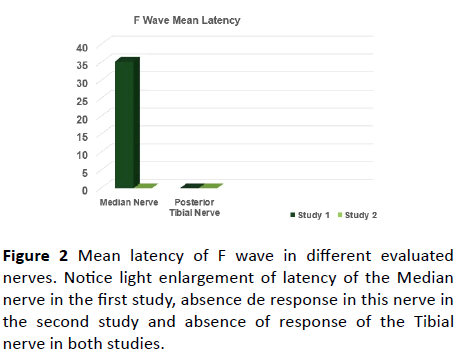 Figure 2 Mean latency of F wave in different evaluated nerves. Notice light enlargement of latency of the Median nerve in the first study, absence de response in this nerve in the second study and absence of response of the Tibial nerve in both studies. 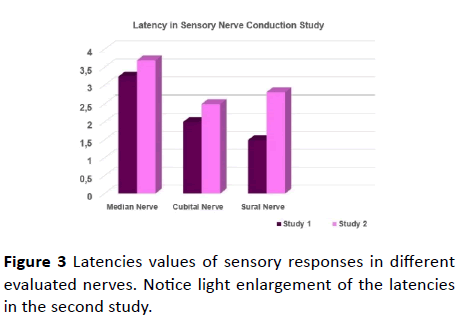 Figure 3 Latencies values of sensory responses in different evaluated nerves. Notice light enlargement of the latencies in the second study. Figure 4 Motor nerve conduction study of Median nerve (A and B) and Posterior Tibial (C and D). Notice marked enlargement of the latencies slowing of conduction velocities, abnormal morphology of the responses, partial conduction block. The abnormalities are marked during second episode. Figure 5 Sensory nerve conduction study of Median (A and B) and Sural nerves (C and D). Notice light enlargement of the latencies, slowing of conduction velocities. The abnormalities are marked during second episode.

• Neurophysiologic studies (There was done 14 days after symptoms had started) (Figures 1-5).

a) Partial conduction block in axilla-elbow and elbow-wrist segments in bilateral median nerves (increment of amplitude decay of the responses>30%).

b) Moderate myelinic signs in motor fibers of both median and cubital nerves (increase of the latencies and slowing of nerve conduction velocities).

c) Axono-myelinic signs of motor fibers of both deep peroneal and posterior tibial nerves (marked increase of the latencies, slowing of nerve conduction velocities and decrease of the amplitude).

Sensory nerve conduction study: Light myelinic signs of the sensory fibers of both median, cubital and sural nerves (light increase of the latencies and slowing of nerve conduction velocities).

F wave: It showed marked abnormality of the conduction at the proximal segment of C5-T1 and L5-S1 bilateral levels (absence of the response in upper and lower limbs).

Laboratory studies have eliminated other causes of acute flaccid paralysis; the case was concluded as a sensory and motor polineuropathy of autoimmune cause.

Patient showed light electrolytic and pH abnormalities, it could be appearing in acute autoimmune neuropathies. They were corrected and there was no complication in relation whit it.

Outcome: The neurologic clinic signs were stable at sixth day of the evolution, patient was diagnosed as recurrent GBS, based in clinical signs and laboratory and neurophysiologic tests. Human immunoglobulin (0.4 g/kg IV daily for five years), vitamin and rehabilitator treatment were applied. She was out when she finished rehabilitator treatment. At this moment she can walk with support.

A case with diagnosis of GBS has been presented, she suffered of GBS previously, the intensity of the signs has been equal in the two opportunities, and the cerebrospinal fluid test has revealed increase of the protein levels in the second episode in relation with the first. Equally the abnormalities of neurophysiologic studies have been higher in the second episode Table 1.

There are few reports of recurrent GBS patients; in Netherlands a research was carried out, it defined a recurrent patient, who had two or more episodes with minimal interval of more of 4 months, the patient was asymptomatic between episodes; in general, those episodes are separated by decades [1,2].

The cause of recurrence is unknown; some authors have demonstrated that recurrent patients are younger, with lighter clinic signs. The Miller Fisher variant is reported with a greater number of recurrent episodes [3-5]. Some authors have proposed that there are risks factories for the recurrence, such as: age lower 30 years, moderate symptoms and history of Miller Fisher variant [6,7]. Generally, there are not differences between episodes with exception episode duration, which is shorter in the first episode; some authors have reported that some recurrent cases have outcome to chronic inflammatory demyelinating polineuropathy (CIDP) [8].

The CIDP diagnosis of acute start should have considered when there are clinic signs of GBS recurrent for more than three times, especially if patient is be able to walk with independence and there is not affection of cranial nerves [9,10].

Wijdicks et al. in 1990 reported five patients whose showed an episode of GBS with total recuperation, in a period between 4, 10, 15, and 17 and 36 years respectively this episode repeated, two of the patients showed multiple episodes; all of them showed normal clinic signs and laboratory tests between recurrent episodes [11].

Kawada et al. in 1992 reported a case which recovered totality of GBS episode, five years later he showed two recurrent episodes with an interval of seven years. Clinical signs and outcome were the same in each one of episode [12].

Tali et al. in 1995 reported the result of an outcome study of 220 patients GBS in a period of seven years, 15 of them (6.8%) showed recurrent episodes in an interval period between 3 months and 25 years, the frequency of recurrent episodes was variable, between 1 and 4 episodes. The clinic characteristics of the recurrent episodes were similar, although some cases showed differences in relation with severity of the episode. All the patients showed whole normality between the episodes [13].

In relation with neurophysiologic studies the authors have said that GBS is in agreement with diagnostic criteria, that demonstrate intense segmental demyelination, recurrent episodes are in agreement with these criteria too, some authors have showed that neurophysiologic abnormalities could be more intense in recurrent episodes, similar the case that we have reported [18-20].

According to author´s reports recurrent GBS is not a frequent disease, it could be appearing sometime after the first episode of GBS, the time between episodes is variable, and it could be from one year to some decades. In recurrent GBS the inter-episode interval is irregular, the duration of the episode is largest and neurologic deficit is more intense with a new episode. There is a decrease of the time between the infection and the start of neurologic signs. The increase of protein level in cerebrospinal fluid is more marked in recurrent episodes. Finally, 5% of recurrent GBS are confirmed as CIDP some years after the first episode.