Objective: Present study was taken up to establish the association between CYP4F2 G1347A polymorphism and risk of ischemic stroke (IS) in a North Indian population.

Conclusion: Present study suggests that CYP4F2 G1347A polymorphism may be an important risk factor for IS mainly for LVD subtype of IS. Prospective studies with large sample size are needed to confirm the present findings.

Stroke is a crucial, devastating neurological disorder which may lead to permanent disability or death. It has been predicted that there will be >200 million Disability Adjusted Life Years (DALYs) lost, 70 million survivors and 20 million deaths after stroke by 2030 across the world [1]. Stroke has been recognized as an intricate, multifactorial and polygenic neurological disorder occurring from the environmental, genetic and combination of vascular risk factors. Heritability presumes the ischemic stroke (IS) varies from 17 to 38% [2,3]. The genome wide association studies (GWAS) have replicated few genetic loci associated with specific IS subtypes. This has guided the concept that genetic risk varies in different subtypes of IS. Several candidate gene association studies have been conducted thus far to identify the relationship of the genetic variants and risk alleles with a particular disease [4].

The gene cytochrome P450 (CYP4F2) is predominately expressed in cerebral arteries of human, which encodes an enzyme ω-hydroxylase that accelerate the metabolism of major membrane fatty acid i.e., arachidonic acid to 20-hydroxyeicosatetraenoic acid which have crucial contribution for maintenance of vascular constriction in skeletal muscle arterioles, coronary, pulmonary circulation, renal and cerebral arteries [5,6]. 20-HETE is a strong vasoconstrictor and can stimulate the myogenic vasoconstriction of cerebral arterial muscle cells [7,8]. A study showed higher level of 20-HETE in plasma after the middle cerebral artery occlusion of stroke and suggested blockage of the formation of 20-HETE may be useful for the treatment of IS [9]. Evidence from literature has shown that CYP gene and altered renal 20-HETE content have a vital role in hypertension and IS.

It’s a subfamily of CYP4F2 enzyme involves in metabolism of Leukotriene B4 (a potent mediator of inflammation) and 20- HETE. Gene is located on the chromosome 19p.13.11 which reduces the ω-hydroxylase that accelerate the metabolism of LTB4, tocopherol and arachinodonic acid. Candidate gene studies have shown that polymorphism G1347A (rs2108622) leads to the substitution of Valine to Methionine which leads to reduced AA metabolizing activity. Recent meta-analysis has shown that CYP4F2 gene variation enhances the risk for ischemic stroke [10]. However, due to modest effect of SNPs in phenotype, studies with adequate number of samples from different populations are needed to be done for the validation of findings. Therefore, we aim to study the relationship between CYP450 (G1347A) gene polymorphism with the risk of IS in North Indian population.

This was an age and sex matched case-control study, undertaken (November 2012 to October 2014) in tertiary referral hospital in India (Neurosciences Centre, All India Institute of Medical Sciences (AIIMS), New Delhi). A total of 250 patients with 250 controls were enrolled after screening the eligibility criteria [11,12]. Local Institutional Ethics Committee approval was taken. All patients underwent a detailed clinical evaluation [13]. Trial of Org 10172 in Acute Stroke treatment (TOAST) criteria was used to further classification of IS [14]. Definition of demographic variables and risk factors were same in the earlier published study Kumar et al. [15].

Cytochrome P450 gene polymorphism was determined using PCR-RLFP method. Primers were designed through Primer-3 online software for the single nucleotide polymorphism. G1347A regions were amplified in the TaKaRa PCR Thermal Cycler Dice (TAKARA BIO INC) using primer sequences: Forward 5’ATCAACCCGTTCCCACCT3' and Reverse 5’ACATTGTGCTCCCAGACG3’ at annealing temperature 59.8°C. The amplified PCR product size of 491 base pairs was digested by using restriction enzyme PvuII after overnight at 37°C. Products were segregated by using 2.5% agarose gel electrophoresis. The polymorphic 1347 A allele paucity at restriction site; hence 491 bp PCR product was not divided. However, G allele had a restriction site which gave fragments of 313 and 178 bp after the digestion (Figure 1). 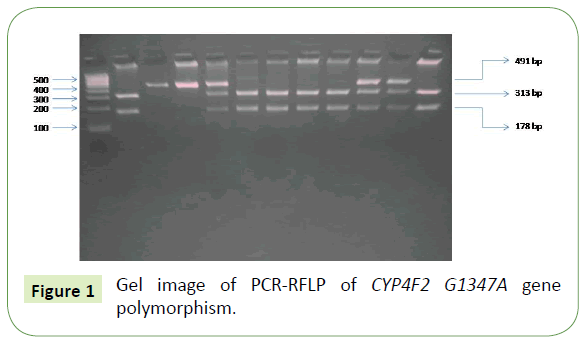 Frequency distribution of genotypes according to Hardy- Weinberg equilibrium (HWE) was done by chi-square test. Association between the risk of IS and gen polymorphism was evaluated by Odds Ratio (OR) with 95% confidence intervals (CIs) by using conditional logistic regression analysis. Multivariate conditional logistic regression used for independent impact of SNP G1347A with risk of IS. Statistical significance was considered as p<0.05. STATA version 13.0 (StataCorp, 2013. Stata Statistical Software: Release 13. College Station, TX: StataCorp LP) was utilised for qualitative and quantitative data analysis.

Mean age of controls was 50.97 ± 12.70 years and 52.83 ± 12.59 years for IS cases. Total 203 male and 47 females were in both groups. We did not observe statistically significant difference in age between patients and controls. Demographic variables and risk factor for both groups have been given in Table 1. Various risk factors significantly higher in IS than in controls (hypertension in 58.4%, Diabetes in 31.6% and dyslipidemia in 22.8% of IS and in the control group, hypertension in 16.8%, diabetes in 10.8% and 5.6% were dyslipidemia).

In this study Cytochrome P450 gene polymorphism is associated with the risk of ischemic stroke mainly for the LVD. Several reports have shown a significant relationship of CYP4F2 polymorphism with the increase risk of IS [16,17]. A published meta-analysis by Meng et al. which included six studies with total 2187 case and 7556 controls, also shown a significant association with CYP450 variant and increase risk of IS under the recessive model (OR 1.37; 95% CI, 1.21-1.54; p<0.001) [10]. However, in case of hypertension a meta-analysis failed to observe a significant relationship of polymorphism G1347A and risk of IS [18]. An earlier reported study by Ward et al. [19] detected a positive correlation between CYP4F2 GA/AA polymorphism and both systolic blood pressure and increased excretion of 20-HETE which support the role of 29-HETE in regulation of blood pressure. Fava et al. also showed an association between A allele of 1347G/A SNP with risk of IS [16].

The findings of this present study were consistent with the results of the study reported from South Indian population [20] which also demonstrated that 1347A allele of CYP4F2 gene polymorphism is a significant risk factor of IS. Because etiology of IS heterogeneous therefore, genetic factors may vary by etiological subtypes of stroke. Evidence from literature has confirmed the association of genetic variants in specific subtypes of stroke [21]. In the present study, subgroup analysis according to TOAST classification suggested that A allele and AA genotype of gene CYP450 (G1347A) were associated significantly with LVD subtype of IS under the dominant model and with the SVD subtype of IS under recessive model of inheritance. In the subgroup analysis according to TOAST classification, Munshi et al. have shown a borderline significant relationship (P=0.07) between 1347 A polymorphism of CYP4F2 and risk of intracranial large artery stroke [20]. These findings strengthen the role of Cytochrome P450 (1347 G/A) in the mechanism of LVD subtype of ischemic stroke. In this study sample size was small to rule out type-II error associated with the present study results. Well-designed prospective cohort studies are needed to corroborate the findings observed in the current study.

This study reveals that CYP4F2 (G1347A) gene variant might be a significant risk factor for IS mainly for LVD subtype of stroke in the North Indian population. It could be used as a potential genetic marker for screening the subjects with the risk of having IS particularly the LVD subtype of IS. We suggest more comprehensive prospective study involving multiple centres with large number of samples to validate the present findings.

• We acknowledge the technical assistance of staff members of the Neurology Department of All India Institute of Medical Sciences, New Delhi. We also thank all patients and controls participants for providing blood samples.

• We would like to thank Department of Biotechnology, Government of India for providing resources through the Programme support in stroke - Phase II projects for successfully completing this study.

The authors have declared that no competing interests exist.