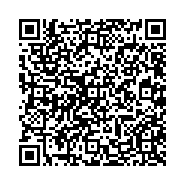 Background: Chronic leg ulcers (CLU) are difficult to heal. Along with history and clinical examination, the ankle brachial index (ABI) is a simple, noninvasive tool used to screen peripheral arterial disease (PAD).
Objective: This study sought to evaluate the association between abnormal ABI and clinical outcomes in patients with lower limb ulcers. Material and Methods: It was a prospective study involving 50 patients with mean age of 47 years having chronic ulcer/ulcers in lower limb. ABI was calculated for bilateral lower limbs.
Results and Conclusions: CLU with vascular etiology accounted for 84% of all chronic ulcers. Maximum ulcers (52%) were due to arterial insufficiency. Mean value of ABI of diseased (limb with ulcer) limb was 0.96 (max=1.2 and min=0.45) and ABI of normal (limb without ulcer) limb was 0.94 (max=1.2 and min=0.8). It was statistically insignificant. ABI value of 0.9 indicates possible borderline PAD. Mean ABI value of diseased limb was 0.94 and it was significantly associated with smoking; (P-value<0.05). Out of 50 patients, 42 patients (84%) had ABI value >0.90 and 7 patients (14%) had ABI value <0.90. ABI value less than 0.9 was associated with poor wound healing and recurrence of ulcers. Hence, ABI is a safe and reliable method of screening of PAD. All patients with an ABI of less than 0.8 should be referred for specialist assessment.

Lower-extremity ulceration does not only affect the patient directly but also has a great impact on the economy since significant healthcare resources are spent to treat, prevent, or decrease the progression of the disease. It decreases the productivity by debilitating the person [1-3]. Foot ulcers are especially common in people who have one or more of the following health problems:

Peripheral neuropathy: Diabetes is the most common cause in middle aged and elderly.

Abnormalities in the bones or muscles of the feet [4-7].

Clinical examination of the lower extremities must be combined with noninvasive or invasive assessment of the circulation to solidify the clinical impression [8,9].

The ankle-brachial index (ABI) is a simple, noninvasive tool used to screen for peripheral arterial disease (PAD), a vascular condition associated with significant morbidity and mortality. Despite its prevalence and cardiovascular risk implications, only 25% of PAD patients are undergoing treatment. As only about 10% of patients with PAD present with classic claudication-40% of patients are asymptomatic-clinicians need to have a high level of suspicion for this disease in their adult patient population [9]. According to American Heart Association (AHA) guidelines, an ABI should be conducted on patients presenting with risk factors for PAD so that therapeutic interventions known to diminish their increased risk of myocardial infarction (MI), stroke, and death may be offered at the right time [8-12].

Mostly this occlusion is due to atheromatous plaques/thrombus in the lumen. Until this obstruction is managed the ulcer would not heal.

The American Diabetes Association recommends measuring ABI in all diabetic patients older than 50 years or in any patient suffering from PAD symptoms or having other CV risk factors [8,9].

The present study was undertaken:

• To establish the role of ABI in prediction of vascular insufficiency

• To compare the value of ABI in diseased and normal limb

All the patients with ulcer/ulcers in lower limb below the knee that did not heal within 6 weeks period after onset, presented in plastic surgery OPD at King George’s Medical University, Lucknow, India, between November 2015 to November 2016 were included in the study. In all patients, detail history with reference to onset, duration, complains associated with ulcers and associated systemic diseases were collected. History of previous ulcer noted. A thorough local and systemic examination was carried out. Ankle brachial pressure index (ABPI) was calculated for bilateral (B/L) lower limbs (Figure 1). • Sphygmomanometer with appropriately sized cuff(s) for both arm and ankle

It was a prospective study involving 50 patients. ABI was calculated for both diseased and normal limb. All observations were tabulated and interpreted in the form of percentage, mean, median and standard deviation. To test the significance of association and difference of means, the Student’s t-test and variance ratio test (F) was applied. All statistical analysis was done with SPSS version: 17.0 statistical package software.

The mean age of all patients in our study was 47 years. There was one peak in age group, between 36-50 years (44%) and another peak was in patients of age group 51-65 years (28%). This can be due to higher prevalence of vascular etiology of leg ulcers and higher prevalence of diabetic neuropathic ulcers (mean age: 54 years) in elderly age group in our study. Male to female ratio was 6.2:1, showing male predominance (Table 1 and Figure 2).

Chronic leg ulcer with vascular etiology accounted for 84% of all chroniculcers. Maximum ulcers (52%) were due to arterial insufficiency. 24% ulcers were due to venous insufficiency, 8% were mixed (arterial+venous), 10% were neuropathic and in 6% ulcers etiology couldn’t be determined. 62% patients had pain and associated history of claudication and 90% haddischarge in the leg ulcers (Table 2).

Table 2 Distribution of cause of ulcers in patients.

Mean value of ABI of diseased (limb with ulcer) limb was 0.96 (max=1.2 and min=0.45) and ABI of normal (limb without ulcer) limb was 0.94 (max=1.2 and min=0.8). The values were almost same. A value of 0.9 indicates possible borderline PAD. A normal ABI value does not absolutely rule out the possibility of PAD. The mean ABI value of recurrent ulcers was 0.85 (< 0.9) suggesting the vascular insufficiency (Table 4).

According to the study conducted by O’Brien et al. [19] in Ireland the prevalence of chronic leg ulcers was 0.12% but it was 1.03% in the patients aged 70 years and over but in our study chronic leg ulcers were more common in patients of age 36-50 years (44%). This can be due to more number of our patients were suffering from Thromboangitis obliterans and strong association was found with tobacco consumption. These were young males belonging to low socioeconomic status. In our study; 86% cases were consuming tobacco either in form of gutka/pan-msala or bidi.

According to the study conducted by O’Brien et al. [19]; Chronic leg ulcers are more prevalent in female than male, same was reported in various other studies in western countries. According to the study conducted by Saraf et al. [20]; a hospital based study in India reported male to female ratio of 5.7:1, which is similar to our institute based study where male to female ratio is 6.2:1, showing male predominance. 88% (44) ulcers were post traumatic and rest 12% (6) were post –infectious. Post traumatic ulcers were more common in males (84%). This may be because in our country males are more engaged in outdoor activities compared to females and they consume more tobacco (panmsala and bidi smoking) as compare to females.

Arterial ulcer is seen among 52% patients in our study. According to GATS-1 (2009-2010) India; prevalence of smoking and any form of tobacco use is more in male (47.9%) compared to female (20.3%) with overall 34.6% tobacco users. Higher rate of smoking and use of tobacco products, especially use of bidi smoking in Indian male could be the cause of more number of male patients compared to female and higher number of arterial ulcers in our study. Also incidence of Burger’s disease (TAO) among peripheral arterial disease is more in India [21-24]. Bidi smoking is prevalent in lower socioeconomic class people who also walk bare foot, so more vulnerable to trauma to foot. Anaemia was present in 58% of cases in our study. Poor education and poverty prevents them to attend health care facility promptly. The above mentioned causes may be the reason of more arterial ulcers in our study.

Venous ulcers are significantly lower in our study (24%) compared to western studies. Only one study available in literature done by Malohotra [25] on prevalence of varicose veins in Indian population, showed prevalence of varicose vein in rail road workers found to be 25.08% in south Indian workers and 6.8% in north Indian workers. No study available comparing duration of ulcer disease between different etiological groups. In our study mean duration of ulcer disease is significantly much greater in ulcers due to neuropathy (22.2 months) followed by ulcers due to arterial + venous disease (21 months).

Smoking (86%) is the most common risk factor associated with non healing ulcers in our study group. In our study; smoking is present in almost all patients having ulcer due to arterial diseases. Anaemia, hypoproteinemia and chronic renal disease are commonly seen with CLU due to multifactorial etiologies. Norman et al. [26] concluded that the ankle-brachial pressure index (ABPI) is a simple, non-invasive bedside tool for diagnosing PAD - an ABPI less than 0.9 is considered diagnostic of PAD. In our institute based study, out of 50 patients, DPA was absent in 18 (36%); ATA and PTA were absent in 2 (4%) cases. The mean value of ABI in these 36% patients was 0.898 which is less tan 0.9 and p-value was significant (0.023) means clinically absent DPA is strongly associated with low ABI. These patients were having clinical features of PAD and ischaemic leg ulcers (Figure 3). These results are similar to the other previous studies. An abnormal ABI may be an independent predictor of mortality, as it reflects the burden of atherosclerosis. Majority agree that a normal ABI is >0.9. An ABI <0.9 suggests significant narrowing of one or more blood vessels in the leg [8,9,16]. In our study; mean value of ABI of diseased (limb with ulcer) limb was 0.96 (max=1.2 and min=0.45) and ABI of normal (limb without ulcer) limb was 0.94 (max=1.2 and min=0.8) [27-29]. The values are almost same. 0.9 indicates possible borderline PAD. A normal ABI value does not absolutely rule out the possibility of PAD. The disease (PVD) is generalised; it affects both the lower limbs but the limb with ulcer seeks our attention first. The apparently healthy limb is also at risk of developing ischaemic ulcer. Mean ABI value of diseased limb was 0.94 and it was significantly associated with smoking (former or current smokers); (P-value<0.05). The sensitivity, specificity and accuracy of the ABI as a PAD diagnostic tool is well documented Lijmer et al. (1996) [30-32]; demonstrated a sensitivity of 79 percent and specificity of 96 percent. In our study; out of 50 patients; 42 patients (84%) had ABI value >0.90 and 7 patients (14%) had ABI value <0.90 (Figure 4). 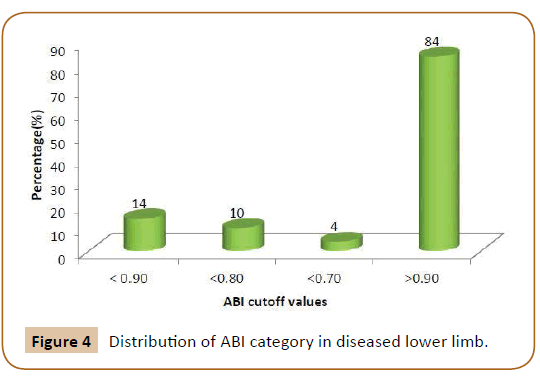 Out of these 7 (14%); 5 (10%) were having ABI value less than 0.8 and 2 (4%) were having ABI value less than 0.70. ABI less than 0.40 is suggestive of severe PAD. One of our patient was having ABI value 0.45; on further evaluation CT Angiography s/o thrombosis of Lt superficial femoral and popletial arteries and Color Doppler s/o monophasic flow in PTA. Cardio thoracic vascular surgery (CTVS) opinion was taken and patient was planned for PTFE (Polytetrafluoroethylene) femoropopletial bypass graft to relieve the claudication and ulceration secondary to superficial femoral artery obstruction [33-35].

ABI value less than 0.9 was associated with poor wound healing and more history of recurrence. ABI is a safe and reliable method of monitoring peripheral arterial disease. With the help of ABI, we were able to diagnose vascular insufficiency (PAD) and we managed the patients accordingly. Compression therapy was used in the management of venous ulcers and it was used cautiously in cases of ABI value less than 0.8 to avoid vascular insufficiency. All patients with an ABI of less tan 0.8 should be referred for specialist assessment. In those patients for whom high compression bandaging is contraindicated, reduced compression may be appropriate in selected cases with further arterial investigations if the ulcer fails to respond to treatment.