Hepatitis C virus (HCV) is the one of the major infections transmitted through the bloodstream. Thalassemia and hemophilia patients because of regular blood transfusions are more prone to HCV infection. This study conducts to determine the prevalence of HCV, HCV viral load, genotype pattern and risk factors in thalassemia and hemophilia patients in Iran. Among 4916 suspected HCV infection patients, referred to Prof. Alborzi Clinical Microbiology Research Center, Shiraz, Iran, from 2004 to 2019, the HCV seroprevalence rate and the HCV RNA load and genotypes was determined by the enzyme-linked immunosorbent assay and one-step Taq Man real-time PCR. Among 4916 patients were assessed for the study, 440 were with thalassemia and 162 with hemophilia. The prevalence of HCV-Ab positivity among thalassemia and hemophilia patients was 58.9% and 87%, respectively. The most prevalent genotype was Gt-1, which was detected in 56.81% of the patients whose genotypes were assessed. The HCV viral load was generally higher among HCV seropositive patients compared to HCV seronegative patients. Prevalence of hepatitis C among hemophilia and thalassemia patients was high. Since in these high-risk groups didn’t find any independent risk factor for HCV, it can be concluded that multi-transfusion is the only predictor for hepatitis C.

Thalassemia is rare hereditary hemoglobin disorders and it’s endemic specially in the Mediterranean Area and South-East Asia [1]. world health organization (WHO) has reported one of the highrisk area for hepatitis C virus (HCV) is South Asia with prevalence rate of 2.1% [2]. Thalassemia is a rare inherited hemoglobin disorder and is endemic primarily in the Mediterranean region and Southeast Asia [1]. In addition, the World Health Organization (WHO) has reported that South Asia is one of the high-risk areas for hepatitis C virus (HCV) with a prevalence rate of 2.1% [2].Two clinical forms of thalassemia according to severity are distinguished: thalassemia major (TM), started during the first year of life and characterized by severe anemia, requiring regular transfusion therapy for survival, thalassemia intermedia (TI), distinguished by later onset and universally milder anemia, without regular transfusion therapy for survival [3]. The most common transfusion-transmitted infectious agents are HCV and HBV [4]. But, the most common cause of post-transfusion hepatitis (PTH) and end-stage liver disease in many countries is HCV, generally. Also, the cause of the second major epidemic of viral infection after human immunodeficiency virus (HIV) is HCV infection [5]. In patients with hereditary hemolytic anemia, especially thalassemia, regular blood transfusion has improved their overall survival, but carries a risk of acquisition of bloodborne virus infections, especially viral hepatitis [6, 7]. Many patients with β-thalassemia are infected with either HCV or HBV because of blood transfusion, especially patients who were received transfusion before the 1990. In reality, serological tests were available for detect infections in blood donors after 1990 [8].

Hemophilia is the result of coagulation factor deficiency. A decisive diagnosis of hemophilia A or B is based on an established family history and presentation of bleeding event in patients that has been confirmed by laboratory tests [9]. Most of children with hemophilia were infected with HCV before the HCV screening of blood products be available [10]. In Iran after implementation of compulsory blood donors screening in 1997, the rate of infection decreased significantly [11]. Hemophilia A is a rare, X-linked bleeding disorder that its prevalence almost is 1 of every 5000 to 10000 live-born males [12]. Hemophilia B is much less common than hemophilia A, with 1 of 25000 births prevalence [13].

In this cross-sectional study conducted between 2004 to 2019, 440 thalassemia and 162 hemophilia patients referred to the PACMRC, were assessed for HCV serostatus, viral load and genotypes. At first, 5 cc of clot blood sample was obtained by venipuncture at the PACMRC. Then, the samples were centrifuged, and its sera were stored in 1.5 mL vials at -70°C until examination. In the first step, we considered the antibodies against HCV infection for all patients included in the study using the GB anti-HCV V4.0 ELISA kit (Hsinchu science Park-Taiwan). In the next step, we extracted HCV RNAs from 200 μL serum of each specimen using Invitek kit (Berlin- Germany), based on the described guidelines. In the end, the HCV viral load and genotypes among all patients assessed. We used one-step Taq-Man real-time PCR HCV quantification and genotype kits (Genome Diagnostics Pvt. Ltd., Hague, Netherland) to perform HCV quantitative tests and genotyping.

Based on manufacturer’ instructions were used a 7500 real- Time PCR system (Applied Biosystems, USA). In all of patients the serostatus of HIV, HDV and HBV was determined, too. The study was confirmed by the Ethics and Research Committee of CMRC, Shiraz University of Medical Sciences, Shiraz, Iran.

For the statistical analysis in this study, the chi-square test was used. All calculation of the data was performed using SPSS for Windows (Version 16.0, 2007, SPSS Inc., Chicago, IL, United States).

A number of factors, which could be associated with HCV infection, were compared between HCV-seropositive and seronegative patients with thalassemia and hemophilia using the univariate analysis. The results of these are summarized in (Tables 2 and Table 3). According to these tables, none of factors were not associated with HCV infection in thalassemic and hemophilic patients (p > 0.05). Also, some factors such as addiction, injection, tattoo, prisoner, phlebotomy and working in vet didn’t exist among thalassemia patients but other patients with these factors infected with HCV. About hemophilia patients needling, transplant cirrhosis, phlebotomy and pregnancy were factors that didn’t exist in these patients.

Finally, the HCV viral load, genotypes and the relationship between HCV antibody and viral load were determined. All the patients were referred between 1 to 9 times for HCV tests and 2627 (5343%) of them showed HCV viremia and genotyping was done in 389 (7.91%) patients.

In the end, the results of our study displayed viral load among HCV-seronegative patients is lower than HCV-seropositive patients.

As shown in (Figure 1), a significantly lower percentage of thalassemia patients have active HCV viremic infection compared to hemophiliacs and general HCV-infected patients.

Also, we obtain significant difference between HCV-Ab positive and HCV-RNA positive among thalassemia, hemophilia and all patients (p value <0.005). 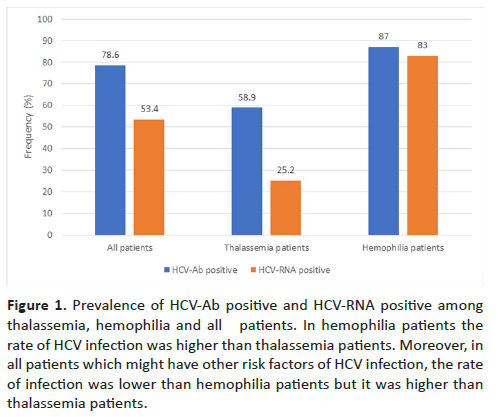 The authors would like to thank the Hassan Khajehei, Ph.D., for copyediting

The authors declare no conflict(s) of interest.

The project has been approved by Shiraz University of Medical Sciences