Guillain-Barré syndrome (GBS) is a rare life threatening acute polyradiculoneuropathy with variable clinical presentations, including weakness, paresthesias, diminished deep tendon reflexes, hyponatremia, dysautonomia, and a cytoalbuminological dissociation on cerebral spinal fluid (CSF) analysis. The exact etiology remains unknown but is thought to occur as a post-infective immunemediated process. Vaccines and illnesses, including H1N1 Swine Flu vaccine, pneumococcal vaccine, Campylobacter jejuni bacteria, cytomegalovirus, and herpes zoster virus, have been associated with GBS. One vaccine that has not been identified to cause GBS is the newly released Shingrix® vaccine for herpes zoster infection prevention. We present a case of severe GBS following Shingrix® vaccine immunization.

Guillain-Barré syndrome (GBS) is a rare life threatening acute polyradiculoneuropathy with variable clinical presentations [1]. GBS has been documented to most commonly occur as a post-infective immune-mediated process. GBS has been associated with many vaccines and illnesses; H1N1 Swine Flu vaccine, pneumococcal vaccine, Campylobacter jejuni bacteria, cytomegalovirus, and herpes zoster virus [2-4]. One vaccine that has yet to be identified to cause GBS is the newly released Shingrix® vaccine. Shingrix® aims to prevent herpes zoster infection and the associated post-herpetic neuralgia. Here, we report a case of severe GBS after recent Shingrix® vaccine immunization.

A 76-year-old female with a past medical history of hyperlipidemia, asthma, macular degeneration, and two previous episodes of pancreatitis of unknown origin, presented with a two-day history of bilateral proximal lower extremity weakness. The Patient denied recent camping, hiking, insect bites, and prior neuropathy/myopathy. However, the patient did report a mild upper respiratory tract infection ten weeks prior to admission. The Patient stated that she had received the new Shingrix® (Recombinant Zoster) vaccine ten days before hospitalization. The Patient reported that she had progressive weakness that initially started with inability to ascend stairs. This progressed to difficulty with standing and a subsequent non-traumatic fall. These described symptoms deviated significantly from her baseline. The Patient’s baseline consisted of independence with mobility and activities of daily living. The patient did not require any assistive devices.

On further assessment, the Patient’s labs were unremarkable. A computed tomography scan of the brain was performed, which revealed no evidence of acute intracranial abnormalities. The report did endorse microvascular ischemic disease involving the white matter. These results were found to be secondary to aging. Magnetic resonance imaging scan of the brain and lumbar spinal cord was only positive for degenerative antegrade spondylolisthesis deformity at L5-S1. Over the next 24 hours, the Patient reported worsening lower extremity paresthesias and weakness. The Patient could no longer stand without assistance. The Patient also stated that she was having neuropathic pain in bilateral lower extremities; burning, tingling, and electrical shock sensations. Furthermore, the Patient described new difficulties with swallowing. An endoscopy was performed, and the Patient was described to have esophageal dysmotility because she was unable to pass the barium pill during the examination. Consequently, a lumbar puncture was performed due to concern for disease progression. Lumbar cerebral spinal fluid studies revealed an elevated protein level (61 mg/dL), a normal white blood cell count (0 CUMM), and a cytoalbuminogenic dissociation. These results indicated acute inflammatory demyelinating polyneuropathy (GBS). Neurologic consultation was obtained. No electrodiagnostic studies were performed.

The Patient was diagnosed with Guillen Barre Syndrome likely secondary to Shingrix® vaccine. Treatment with intravenous immunoglobulin (2 g/kg divided over five days) was initiated. The Patient showed gradual improvements with five days of treatment and was transferred to an acute rehabilitation facility (Hospital day 5). At discharge, the Patient’s bilateral Patellar and Achilles tendon reflexes remained absent. However, the Patient was able to stand and ambulate with a walker.

Five days after discharge to the rehab facility, the patient reported worsening of bilateral lower extremity pain (per Patient, this pain was worse than her prior admission). The patient was therefore readmitted to the hospital. On examination, the patient had 5/5 bilateral upper extremity strength, 5/5 bilateral strength on lower extremity dorsiflexion, normal bilateral sensation in upper and lower extremities, and 3/5 bilateral lower extremity hip flexion strength. This strength assessment was consistent with the Patient’s previous presentation. Furthermore, light touch sensation was intact in all four extremities. There was no apparent sensory loss. Bilateral Achilles and Patellar tendon reflexes remained absent. However, the Patient could no longer stand with and without assistance and therefore could no longer ambulate. This presentation significantly deviated from her prior discharge appearance.

Initially the patient described neuropathic pain and therefore, she was treated with Gabapentin and amitriptyline. However, the patient became hyponatremic (133 mmol/L on admission to 122 mmol/L after treatment) and had significant fluctuations in her blood pressure (ranging from 110/67 mmHg to 182/88 mmHg). Additionally, the Patient unfortunately feels due to weakness while attempting to walk with assistance. She suffered a nondisplaced spiral fracture through the distal fibular metaphysis and had a large ankle joint effusion. The Patient was seen by Orthopedic Surgery and was placed in a CAM boot. Plasma exchange was initiated because the Patient’s muscular strength continued to decline, and her lower extremity pain was increasing.

After undergoing three plasma exchange treatments, the Patient showed remarkable improvement with lower extremity strength and power. The Patient was then able to ambulate the hospital halls with the use of a walker and some assistance after five treatments of plasma exchange. Additionally, the Patient’s neuropathic pain improved. She was then discharged to an acute rehabilitation center with scheduled physical therapy (Figures 1 and 2). 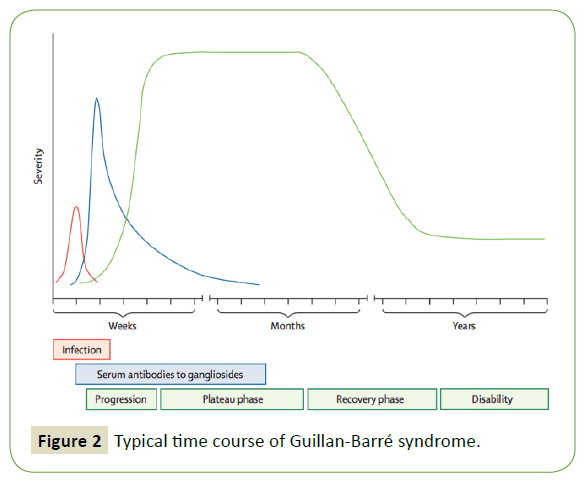 We present a case of Guillian-Barré syndrome that occurred 10 days after Shingrix® vaccine administration. We identified no other possible etiology of the Patient’s symptoms. The Patient displayed several key features of GBS established by the Brighton Criteria of weakness; paresthesias, diminished Patellar and Achilles deep tendon reflexes, hyponatremia secondary to Syndrome of Inappropriate Antidiuretic Hormone secretion (SIADH), dysautonomia, and cytoalbuminological dissociation on cerebral spinal fluid analysis. We believe that this is an example of post-vaccine related Guillain-Barré Syndrome, given the timing of the presentation and when she received her vaccine [2-6].

While electrodiagnostic studies have been used to help diagnose GBS secondary to bacterial, viral, and vaccination origins, these results are not necessary. The diagnosis of GBS is confirmed with the elevated CSF protein level and absence of deep tendon reflexes (found in 90% of GBS affected patients) [2]. Additionally, it can take up to four weeks before electrodiagnostic studies show loss of motor and sensory response secondary to GBS [7]. GBS is a rapidly progressing disease and if not treated in a timely fashion can result in paralysis of the diaphragm and even death [7].

There have been numerous vaccines connected to GBS, including the H1N1 swine flu vaccine and the pneumococcal vaccine. However, the newly release Shingrix® vaccine has yet to be reported to be associated with this potentially life threatening polyradiculoneuropathy [3]. Shingrix® is a non-live recombinant vaccine containing the varicella-zoster virus glycoprotein E in combination with an adjuvant ASO1B suspension component [8]. This immunization was FDA approved and released to the public in 2017 to prevent latent activation of varicella zoster virus (Chickenpox) as herpes zoster virus (Shingles) in patients 50 plus years old [9]. This vaccination presents in a two-dose series and is administered intramuscularly 2-6 months apart (Table 1).

Before Shingrix® was released; the Zoster vaccine was used to inhibit varicella zoster virus reactivation [10]. However, Shingrix® has been found to be superior. Shingrix® not only prevents latent herpes zoster virus reactivation within the dorsal root ganglia of a dermatome after primary infection, but also prevents the subsequent post-herpetic neuralgia [9-11]. Post-herpetic neuralgia affects 10-13% of infected individuals. Following the resolution of shingles, post-herpetic neuralgia consists of persistent pain for at least 90 days [11]. Documented adverse reactions to the Shingrix® vaccination from eight high quality randomized control trials, include local injection site rash or irritation, disseminated rash, herpes zoster infection in immunocompetent patients, and life-threatening complications in immunocompromised recipients [9-13]. However, none of these studies demonstrated a relationship between Shingrix®, nor the previous Zoster vaccine, to GBS. As a result, GBS likely secondary to the Shingrix® vaccine could not have been expected in this patient after receiving this immunization.

Interestingly, there have been multiple cases of GBS secondary to herpes zoster infection. The first documented case was in 1924. Since then, there have been over 50 cases described [14]. It is thought that the mechanism by which GBS results from herpes zoster infection is similar to that of GBS secondary to Campylobacter jejuni [4]. It has been hypothesized that GBS results from C. jejuni infection because the bacteria’s lipopolysaccharide contains epitopes that resemble human peripheral nerve ganglioside epitopes [4,9]. Consequently, the human body generates antibodies against these bacterial lipopolysaccharide epitopes. These antibodies then also target the patient’s peripheral nerve gangliosides because they cannot distinguish between the ganglioside epitope and the bacterial epitope. In summary, the bacterial lipopolysaccharide epitope acts as a molecular mimicker [4]. The precise nature by which this occurs is still unclear. Therefore, the mechanism by which GBS may result from Shingrix® vaccine remains unknown. If further cases reveal a similar association, this should be further explored. Per this case report and prior documentation of GBS secondary to herpes zoster, there is now evidence to state that antibodies generated in a lab against herpes zoster and then given intramuscularly via vaccination (Shingrix®) may be a sufficient nidus for Guillain-Barré syndrome (Table 2).

In summary, we present a case of GBS that occurred shortly after Shingrix® vaccination. Our case is consistent with other vaccine and herpes zoster related cases of GBS. Clinicians should be cognizant of the possible association between Guillain-Barré syndrome and the new Shingrix® vaccine.