2 Department of Genetic Engineering and Biotechnology, University of Baghdad, Iraq

The objective of this study was to determine the level expression of SOX4 gene and its role in induce adenomyosis. Tissues specimens (30 patients and 10 healthy groups). Histological study of all tissues was carried out to observe the changes in tissues. Thirty biopsies of hysterectomy were concluded in this study. The expression levels of SOX4 gene were estimated by QRT-PCR. This study recorded the mean folding of SOX4 was a highly significant increased (p<0.01) in patients with adenomyosis (6.96 ± 0.27) when compared to the healthy control group (1.00 ± 0.00). We concluded the high expression of SOX4 gene had a role in development the uterine adenomyosis.

Adenomyosis is a typical gynecological disorders; it is a myometrial lesion portrayed by the nearness of ectopic endometrial organs and stroma found inside the encompassing myometrium with contiguous myometrial hyperplasia and hypertrophy [1]. Indications are generally announced as menorrhagia, dysmenorrhea, pelvic paien, abnormal uterine bleeding and mass related side effects. In spite of its normal event, the etiology and pathogenesis of adenomyosis stays misty. Past epidemiologic examinations researched chance elements for adenomyosis. Hazard factors include: age between 40 and 50 years, early menarche, short menstrual cycles, a first birth at an early age, multiparity, sharp curettage amid early pregnancy, heftiness and tamoxifen utilize [2]. Adenomyosis, is pseudotumors of several organs, including the uterus and additionally the bile channels and gallbladder [3].

There are many genes that have an important role in induction of adenomyosis including CXCL10, calbindin D-28K, Prostaglandin related factors such as prostaglandin E receptor 3, COX-2, HLA-G, Interleukin-10, Beclin-1 and Histondeastylase [4- 9]. These data suggest that the genetic and epigenetic abnormalities contribute to the pathogenesis of adenomyosis.

SRY-related high-motility group box 4 gene SOX4 is overexpressed in a variety of cancers and disease, It has been shown to be involved in the determination of cell fate and the regulation of embryonic development of many organ systems including heart, pancreas, brain and endometrial cancers reported the important role of SOX4 gene in progression of endometrial hyperplasia to endometrial adenocarcinoma [10- 14].

Histological technique of all tissues was carried out to observe the changes in tissues. Thirty biopsies of hysterectomy and curettage were concluded in this study [18].

Total Ribonucleic Acid (RNA) of all samples was extracted using the TRIzol® LS Reagent according to the manufacturer's instructions. Total Ribonucleic acid (RNA) was reversely transcribed to complementary Deoxyribonucleic acid (DNA) using WizScript™ RT FDmix Kit. The procedure was carried out in a reaction volume of 20 μl according to the manufacturer's instructions. The expression levels of SOX4 gene were estimated by qRT-PCR. To confirm the expression of target gene, quantitative real time qRT-PCR SYBR Green assay was used. The mRNA levels of endogenous control gene GAPDH were amplified and used to normalize the mRNA levels of the SOX4 gene. SOX4 primers sequences are (Forward: 5′-AGGATTCAAA CGCAACTCAAAT-3, Reverse 5′-AAAGAAATACGAGGATGGAGCA-3) and sequence of GAPDH (Forward, 5- AACTTTGGCATTGTGGAAGG-3 and Reverse, 5- ACACATTGGGGGTAG GAACA-3).

?CT and ??CT were calculated according to their equation [19]. This was conducted according to Statistical Analysis System-SAS to measure the effect of different factors in studying the parameters. Least Significant Difference (LSD) test was used to compare between means and Chi-square test between percentages [20]. The means and standard deviations were recorded for each sample (test and control) variables included Ct values and gene expression levels. This included values of housekeeping gene and test gene. P value for all tests was considered significant if <0.05.

Distribution of adenomyosis according to age

Reported adenomyosis to be found in 16.59% of hysterectomy specimen commonly in multiparous women of 31-50 years. Recurrence of adenomyosis increments with age, peaks at 40-50 years and levels-off after menopause. Increment in recurrence is related with multiparty [22]. Menstrual disturbance, smoking, dilatation, and curettage aid to increase the risk of adenomyosis [23]. Three essential steps to determine the gene expression of SOX4 in patients with adenomyosis:

GAPDH gene expression: There were no significant differences of Ct value of GAPDH in subjects and healthy control group (1 ± 0.00). The housekeeping gene used in the present study is shown in Table 2.

The mean fold of GAPDH gene expression in the patients groups was (0.98 ± 0.08) and Figures 2 and 3 show the amplification plots and melting curves for Glyceraldehyde 3- phosphate dehydrogenase (GAPDH) gene. 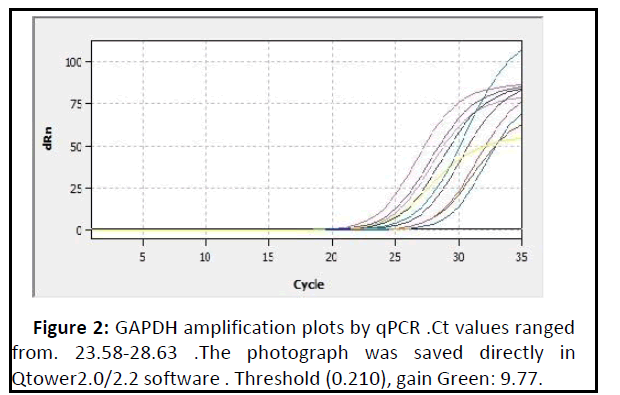 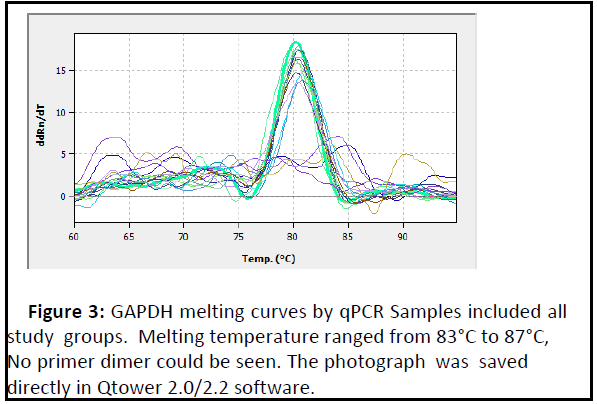 Figure 3: GAPDH melting curves by qPCR Samples included all study groups. Melting temperature ranged from 83°C to 87°C, No primer dimer could be seen. The photograph was saved directly in Qtower 2.0/2.2 software..

Studied the expression of 1,718 genes using qRT-PCR [29]. They applied the GAPDH as a reference gene in 72 kinds of normal human tissues. They found that using GAPDH is quite a reliable strategy for the normalization in qRT-PCR when applied clinical studies.

SOX4 gene expression: Expression of the SOX4 gene was highly significant increased (p<0.01) in patients with adenomyosis when compared to the healthy control group as shown in Table 3 and Figures 4 and 5 show the amplification plots and melting curves for SOX4 gene. 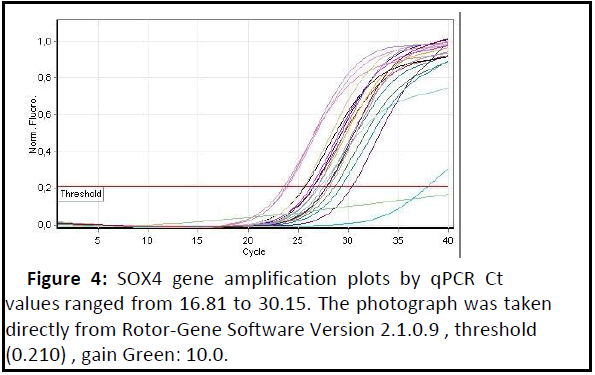 Table 3: Fold of SOX4 gene expression. Depending on 2-ΔΔCt method.

Although the functional contributions of smooth muscle cells to adenomyosis development are poorly understood, reported that epithelial and stromal cells in endometriosis develop from persistent coelomic epithelial cells by metaplasia [30].

In pelvic endometriosis, eutopic endometrial cells arriving through retrograde transplantation at ectopic sites could induce the surrounding tissue to undergo smooth muscle metaplasia. Similar to endometriosis, adenomyosis associated smooth muscle cells may be of metaplastic origin. Myofibroblastic metaplasia with formation of an abnormal myometrial hypertrophy may contribute to an impaired uterine function.

On the other hand, reported that the presence of adenomyotic nodules in deeply infiltrating endometriosis lesions is accounted for by a reaction of the local environment to the presence of ectopic endometrium [33]. Myofibroblasts play an important role in the development of adenomyosis by their expression of Extracellular Matrix (ECM) proteins. These data suggest that myometrial hypertrophy is a response/reaction of the ectopic endometrial cells to the surrounding tissue, which shares characteristics with physiological and pathological mechanisms of wound healing (tissue injury and repair) [32-35].

Adenomyosis is a benign pathology represented by the presence of endometrial gland and stroma within the myometrium and it has been associated with endometrial cancer [36]. A high expression of SOX4 gene was reported with endometrial cancer incidence by epigenetic manner [13]. Confirm that the adenomyosis can be a precursor of some carcinoma but the exact molecular mechanisms that lead to malignancy are poorly understood. Therefore, this study suggested there are relationships between high expression of SOX4 gene and adenomyosis incidence [37,38].

MiRs play an important role in carcinogenesis by targeting tumor suppressor gene or by act as Oncogenes with elevated expression. MiR-203, miR-129-2, miR-596, and miR-618 identified to bound to the 3-UTR of SOX4 gene insilico analysis and these miRs keep the levels of SOX4 by the degradation of its mRNA. Reported that the hypermethylated promoters of miR- 129-2 and miR-203 lead to SOX4 overexpression. In conclusions the SOX4 gene participate in induction of uterine adenomyosis as well as in many histological changes especially when in overexpression status.