The Clinical Features in Subarachnoid Hemorrhage of Unknown Etiology

Background: Subarachnoid hemorrhage (SAH) without aneurysm rupture is called SAH with unknown etiology (unknown SAH). We analyzed and report the latest study of the clinical features and prognosis of patients with unknown SAH.

Methods and Findings: The study included 21 patients who had been treated at our institution. The diagnosis of unknown SAH defined as no cause of hemorrhage like cerebral aneurysm, despite of repeated vascular examination.

Discussion: The patients’ age, sex, Glasgow coma scale on admission, use of antithrombotic drugs and presence of hypertension and diabetes were not concerned with prognosis. Only dyslipidemia had correlation with poor prognosis. The distribution or laterality of hematoma on computed tomography also has no relation with prognosis.

Conclusion: Our study showed no significant correlation between any characteristics of patient or SAH and prognosis, except dyslipidemia with poor prognosis. It is difficult to determine prognostic factors, therefore, we need careful examination and adequate treatment for the patients of unknown SAH.

Many cases of subarachnoid hemorrhage (SAH) are caused by cerebral aneurysm rupture, but there are cases of SAH not associated with aneurysm. The latter cases are referred to as “SAH of unknown etiology (unknown SAH)”. It is defined as SAH without traumatic history and any vascular lesions such as aneurysm that can cause bleeding despite repeated vascular examination [1-3]. Although cases of unknown SAH have been reported in the past, the reports are often relatively old and/or small in scale [4]. Here, we report the latest study on the clinical features and prognosis of patients with unknown SAH treated at our institution.

The study included patients who had been treated for SAH at our institution from January 2007 to December 2016. Based on computed tomography (CT) scans, SAH was diagnosed in patients with grade II or greater according to the Fisher’s classification. Of the patients diagnosed with SAH, those with no cerebral aneurysm, cerebral arteriovenous malformation or moyamoya disease as a likely cause of hemorrhage were diagnosed as having unknown SAH. The patients who had traumatic episode were excluded. Vascular examination was performed using either or both CT angiography and digital subtraction angiography (DSA) on at least two occasions. The imaging data were assessed by two experienced neurosurgeons and two experienced neuroradiologists. This study was pursued in accordance with the institutional review board (IRB) of our institution.

Information on patient’s background characteristics, such as age, sex, Glasgow coma scale (GCS) on admission, use of antithrombotic drugs, and presence of hypertension, dyslipidemia, and diabetes as comorbidities, was collected. The type of hematoma on CT at diagnosis was classified as either local or diffused (Figure 1). 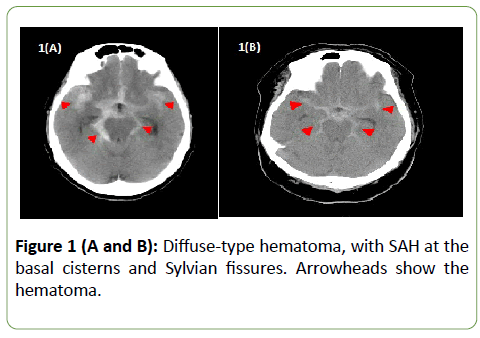 Figure 1 (A and B): Diffuse-type hematoma, with SAH at the basal cisterns and Sylvian fissures. Arrowheads show the hematoma.

Hematoma with SAH primarily localized in either the basal cistern or the Sylvian fissure was defined as local type. Hematoma with SAH found across multiple cisterns was defined as diffused type. Hematoma with SAH localized on either side of the ambient cistern or the Sylvian fissure was designated as having a left-to-right difference (laterality). Conservative therapy was administered as the initial treatment in all patients. Surgical intervention was performed for secondary hydrocephalus. Vasospasm was treated with nicardipine dosed either via drip infusion or oral route, but the medication was not used in patients with lower hematoma volume and mild symptom. Prognosis was evaluated by modified Rankin Scale (mRS) at discharge.

For univariate analysis, the chi-squared test was used to test independence from sex, GCS on admission, use of antithrombotic drugs, location of hematoma, and presence of hypertension, dyslipidemia, or diabetes. The t-test was used to analyze age (variables showing a normal distribution), whereas the Mann-Whitney U test analyzed GCS on admission (variables not showing a normal distribution). For all analyses, we used the PASW Statistics software package (version 18.0.0, SPSS Japan Inc., Tokyo, Japan). A p-value <0.05 was considered statistically significant.

A total of 318 patients were studied during the defined period. Among these, 21 patients (6.6%) were diagnosed with unknown SAH and further investigated. The patient characteristics are summarized in Table 1.

Table 1: Characteristics of the cases.

At discharge, 18 (85.7%) patients had mRS scores ranging from 0 to 2, indicating generally favorable prognosis. No patients died during the study period. Surgical intervention was used in four patients, including two patients with acute hydrocephalus treated with external ventricular drainage, one patient with delayed hydrocephalus treated with ventriculoperitoneal shunt, and one patient with adhesive arachnoiditis in the thoracic vertebra who underwent surgical dissection. Ventriculoperitoneal shunt and intervention for adhesive arachnoiditis were performed on days 33 and 450, respectively. The patients were stratified into subgroups of favorable prognosis vs. poor prognosis (mRS score, 3-5) and correlation analysis was performed on the age, sex, GCS on admission, underlying diseases, and the use of antithrombotic drugs (Table 2).

The only correlation noted was a trend toward poor prognosis in patients with dyslipidemia. As for the age, the subpopulation with poor prognosis was slightly older, but there was no significant difference. Hematoma distribution on CT was classified as either diffused or local (Figures 1 and 2). No significant correlation was seen between the hematoma distribution and mRS at discharge. Correlation analysis was also performed for hematoma laterality, but no significant difference was noted (Table 3). 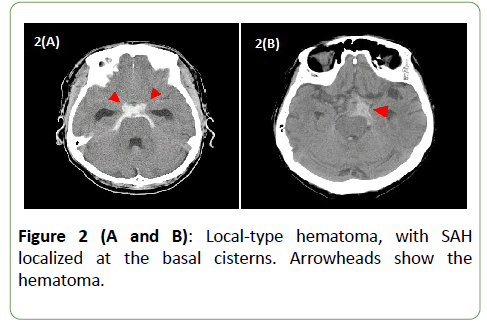 Figure 2 (A and B): Local-type hematoma, with SAH localized at the basal cisterns. Arrowheads show the hematoma.

According to previous literature, the proportion of unknown SAH, that is, SAH without cerebral aneurysm/cerebral arteriovenous malformation as a likely cause of hemorrhage, is mostly between 15% and 30% [3,5-8]. However, a proportion higher than 50% has also been reported in older literature [2]. Representative reports are shown in Table 4 [2,3,5-8]. The frequency is decreasing with the times, and this trend may be attributed to the advancement in diagnostic modalities that can detect cerebral aneurysms. In the past, traditional angiography has been used as the gold standard for the diagnosis of cerebral aneurysms, but the diagnostic capacity drastically improved with the introduction of DSA [9]. In the 2000s, diagnostic precision has further improved with the introduction of three-dimensional DSA and CT angiography [10]. This progress must have helped in reducing the frequency of unknown SAH. In particular, aneurysm in the internal carotid artery, or the so-called blister-like aneurysm, is often difficult to diagnose, and the diagnostic capacity for such a small aneurysm is likely to be highly relevant. Under the current situation, multiple examinations using different modalities are important in order to diagnose true unknown SAH. Unlike traditional angiography, CT angiography is less invasive to patients and allows repeated examinations; hence, at least three examinations are recommended. However, examination with magnetic resonance imaging failed to diagnose unknown SAH [11].

Table 4: Transition of frequency for SAH of unknown etiology.

Many previous reports, using CT, classified hematoma distribution as perimesenceplaric (PM) and non-PM types. However, the frequencies of PM and non-PM types greatly vary depending on the report. The frequencies reported are 32.3% to 68.6% for PM type and 31.4% to 69.5% for non-PM type, with the predominant type varying from one report to another (Table 5) [3-7].

Table 5: Ratio of PM and non-PM types on CT findings.

The proportion of the PM type is also decreasing in recent reports, in the same manner as the frequency. However, such a large variation in proportion suggests that it cannot be an important factor in predicting the prognosis of unknown SAH. Therefore, we performed analysis using the classification of local vs. diffuse types to reflect hematoma volume, unlike the traditional classification. We also analyzed the laterality. This factor was not found to be a prognostic factor, however. Meanwhile, Woznica et al. reported the different conclusions. They concluded that hematoma volume on initial CT correlated with the condition at the first visit and the prognosis [8]. Their study included 168 patients with unknown SAH, a sample size vastly greatly different from that of our study. This is the biggest limitation of the present study and has likely led to results different from theirs.

Similarly, our study did not detect a significant correlation between the prognosis and the patient’s age, sex, or underlying diseases in most cases. No correlation was seen with the use of antiplatelet agent either. The only correlation noted was a trend toward poor prognosis in patients with dyslipidemia. This difference cannot be confirmed to be significant because of the limited sample size.

All we can infer is that no prognostic factor can be determined from these results. Although a favorable prognosis is likely assumed for patients with unknown SAH in many cases, a few cases have poor prognosis, which is difficult to predict. Accordingly, physicians should treat all patients with vigilance.

Other limitations of the present study include varied diagnostic and treatment methods due to the retrospective nature and possible bias in patient selection due to the singlecenter design. In order to analyze more cases, further investigation by multicenter prospective observational research is required.

This single-center study was conducted to investigate the clinical features and prognostic factors in patients with unknown SAH. The results did not identify a factor that may predict the prognosis, indicating that each patient should be treated in a careful and adequate manner.