Derived from the Greek word “ημικρανία” (hemikrania), Migraine means ‘pain on one side of the head’. Migraine is a common neurovascular disorder with instability in the way the brain is dealing with the sensory information that is incoming. The Migraine syndrome consists of a moderate to severe recurrent, unilateral, throbbing headache lasting hours to days, which is generally accompanied by nausea, photophobia, phonophobia and is worsened by routine physical exertion [1]. This sensory sensitivity is said to be due to dysfunction of monoaminergic sensory control systems, particularly CGRP, 5-Hydroxytryptamine and Dopamine. In recent years, many studies have highlighted the role of vitamin D levels in development of various diseases. Vitamin D is a steroid which not just has its role in calcium homeostasis and bone health but possesses apoptotic, anti-inflammatory and immunomodulatory properties [2]. Vitamin D is also needed in serotonin synthesis. As increase in serotonin decreases CGRP levels, it is common to encounter migraine headache and low levels of vitamin D in Indian population suggesting that there may be a common link between the two diseases [3]. A study was conducted by our department in Chhatrapati Shivaji Subharti Hospital, Meerut to assess the correlation of serum vitamin D level with the clinical severity & duration for each patient.

50 patients diagnosed to be suffering from migraine as per IHS (International Headache Society) guidelines were selected for inclusion in the study. Thus, study population consisted of 100 patients, 50 age and sex matched healthy individuals with similar socio-economic status were taken as controls [4]. Detailed history and examination was carried out in all the patients. Serum vitamin D levels were done in all the cases and controls.

Quantitative data was presented as mean ± SD or median and inter-quartile range, as appropriate. Normality of quantitative data was checked by measures of Kolmogorov Smirnov tests of normality. For categorical variables number & percentages were calculated. Frequency of migraine headache was presented as median and interquartile range. For two groups cases & control continuous variables were compared using Mann Whitney U test. Comparisons of continuous variables between three groups of Vitamin D were done by One-Way ANOVA followed by Post- Hoc Multiple comparisons or Kruskal Wallis test. For all patients vitamin D levels were done & prevalence of deficient patients was calculated. Chi-square test or Fisher’s exact test was applied for categorical data. Multinomial regression was carried out to find the independent predictors of headache days (divided into categories). All calculations were two side & performed using SPSS version 17 (Statistical Packages for Social Sciences, Chicago). A P value of <0.05 was considered to indicate statistical significance.

Table 1 The clinical characteristics of the study population. 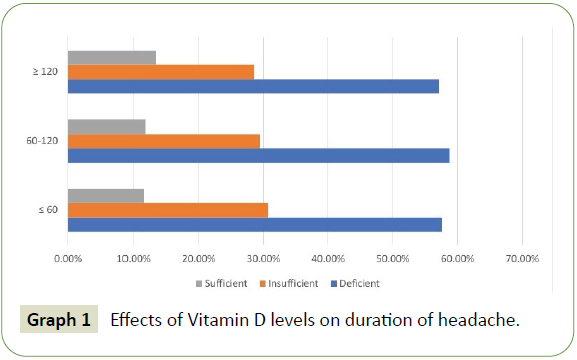 Graph 1: Effects of Vitamin D levels on duration of headache. The patients, who were followed up, after Vitamin D supplementation, were included in the study, following compliance ensured verbally. Supplementation was done via injectable as well as oral routes, accordingly. A minimum of 4 weeks and maximum of 8 weeks of supplementation was ensured, before re-sampling of the patient (Graphs 3 and 4). Graph 4: Correlation of symptom improvement in the cases with Vitamin D supplementation.