Tumefactive Neuro-BehcetÃÆÃÂ¢ÃâÃ¢âÂ¬ÃâÃ¢âÂ¢s Disease: A Case Report and Review of the Literature

Methods: Here we present a case of forty-two-year-old Turkish male with tumour like brain lesion whose tissue biopsy result was compatible with necrotic inflammation, perivascular polymorphonuclear leukocytes (PMNL), lymphocytes and other inflammatory cells infiltration. Bacterial and fungal blood cultures were negative. The patient was diagnosed with NBD and was treated with intravenous methylprednisolone 1000 mg/day for 5 days. His neurologic examination improved significantly with the treatment. We evaluated histopathological properties of all biopsy proven cases reported so far in the literature including our case.

Results: When tumour-like lesions were seen in patients who had Behçet's disease in past medical history, NBD should be considered for preventing unnecessary brain operation. Seventy-three percent of all biopsy proven tumefactive NBD cases had inflammatory cell infiltration in the tumour like lesion area.

Conclusion: After excluding infectious aetiology, high dose IV methylprednisolone should be begun as soon as possible in spite of mass effect that is compatible with tumour in brain magnetic resonance imaging (MRI); the good response to steroid supports to the diagnosis of tumefactive NBD. Although most tumefactive NBD patients have inflammatory infiltration in biopsy material why some cases do not have any inflammatory cell infiltration in acute lesion area needs to be clarified in further research.

Behçet's Disease (BD) is a multi-systemic autoimmune disease, characterized with recurrent oral-genital ulcerations, uveitis and skin lesions such as erythema nodosum, folliculitis, ulceration and skin pathergy reaction [1]. Neurological involvement (Neuro-Behçet's Disease, NBD) is one of the leading causes of mortality and morbidity in Behçet's Disease [2]. Central Nervous System (CNS) lesions in BD are polymorph and occur in 5.3% of Turkish cases [3]. In addition, men were 2.8 times more likely to experience NBD than women [2]. Clinical patterns of neurological involvement can be categorized as two main groups; those with parenchymal CNS involvement (encephalitis, encephalomyelitis) and those with non-parenchymal CNS involvement. The latter group consisted of cases who had CNS dysfunction due to involvement of major vessels and those who did not show any CNS parenchymal involvement (essentially cerebral venous thrombosis and, rarely, intracranial aneurysms) [3]. The brain magnetic resonance imaging (MRI) lesions are usually localised in brainstem and basal ganglia in parenchymal NBS. There have been 10 biopsy-proven tumefactive NBD case reports in English based literature so far [4-13]. We evaluated histopathological properties of all the cases including our case. We think this may be helpful to comprehend different neuropathological involvement pattern of NBD and may trigger future researches

Forty-two-year-old Turkish male admitted to a Neurosurgery clinic with a complaint of weakness in the left extremities, sleepiness and secondary generalized seizures in February 2013. Because of contrast enhancing lesions with necrotic core and extensive oedema around the lesions in brain MRI (Figure 1a) he was undergone an operation and the result of tissue biopsy was compatible with necrotic inflammation, perivascular polymorphonuclear leukocytes (PMNL), lymphocytes and other inflammatory cells infiltration (Figure 1b). Then, he was admitted to our clinic in March 2013. Except for erythema nodosum his physical examination was normal. Confusion, amaurosis in the both eyes, left spastic hemiparesis (1/5 in the upper and 3/5 in the lower extremity), Babinski's and Hoffman's signs in the left were found in the neurologic examination. Past medical history revealed that he had Behçet's disease since 1998 and had blindness due to eye involvement of BD since 2009. 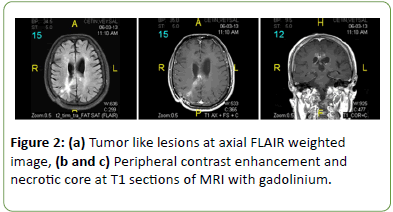 Figure 2: (a) Tumor like lesions at axial FLAIR weighted image, (b and c) Peripheral contrast enhancement and necrotic core at T1 sections of MRI with gadolinium.

The patient was diagnosed with NBD and was treated with intravenous (IV) methylprednisolone 1000 mg/day for 5 days. His left spastic hemiparesis improved significantly; muscle power became 3/5 and 4/5 in the upper and lower left extremities, respectively, on the fifth day of the treatment. He was discharged from hospital with oral steroid and pulse cyclophosphamide as maintenance treatment. Control brain MRI three months later showed significant reduction in all the lesions (Figure 3). Figure 3: (a) On post treatment images there was significant reduction in lesion size at FLAIR sequence (b and c) Less contrast enhancement and absence of necrotic core in T1 weighted MRI images with gadolinium.

CNS lesions in BD are polymorph and occur in 5.3% of cases in Turkey [3]. CNS involvement is one of the most severe manifestations of BD [14]. Sometimes it is difficult to differentiate from multiple sclerosis, stroke, intracranial hypertension, meningoencephalitis and myelitis. Concomitant systemic signs and symptoms are helpful in differential diagnosis [15].

Because of space-occupying lesion our case was operated at first. Since histopathologic examination revealed perivascular inflammatory infiltration, after excluding infectious causes, he was diagnosed with tumefactive NBD. As previously suggested, he was given high dose steroid and he improved significantly [4].

NBD may rarely cause tumour-like lesion, tumefactive NBD. We searched tumefactive NBD case reports in English based literature and found 10 biopsy proven cases that had mass effect in brain MRI by means of midline shift and/or ventricular compression so far [4-13]. Data regarding age, gender, complaints at admission, neurological symptoms, CNS imaging, histopathologic findings and treatment response were summarized including our case in Table 1 (11 cases).

The chosen treatment modalities were mainly corticosteroids during acute attacks (n=10; 91%) and immunosuppressive agents (n=6; 54.5%) such as cyclophosphamide and azathiopurine for preventive treatment (5-13). One patient who had panvasculitis in biopsy material was just operated, not given any medical treatment [4]. Nine out of ten patients (90%) improved completely or partially with steroid; however, one patient did not respond the treatment in her third attack and since she had transtentorial herniation, temporal lobectomy was done and she died later on [12].

For differential diagnosis of tumefactive NBD, space occupying lesions such as glioblastoma multiforme, lymphoma, bacterial abscess or tuberculoma must be considered. Rarely, an inflammatory condition such as sarcoidosis, Wegener's disease, multiple sclerosis (Balo's type) or granulomatous pseudotumour may lead to similar lesions [8]. It has been suggested that histopathological examination may be done to rule out infectious or tumoural diseases and to avoid the inadequate use of immunosuppressive agents in previous reports [14,16,17].

In summary, headache and paresis were the most frequent admission complaints, just compatible with classical parenchymal NBD. The most frequent lesion localisation was brain stem, basal ganglia or thalamus, also was compatible with classical parenchymal NBD; lobar lesions were seen less commonly in tumefactive NBD. Most cases had perivascular inflammatory cell infiltration in biopsy material and respond steroid very well. However, it should be kept in mind that inflammation may not be seen in biopsy material and some cases may not give good response to steroid treatment. Panvasculitis may be seen rarely (9%) in acute tumefactive NBD lesion.

We thought that when tumour-like lesions were seen in patients who had Behçet's disease in past medical history, NBD should be considered for preventing unnecessary brain operation. After excluding infectious aetiology with appropriate investigations, high dose IV methylprednisolone should be begun as soon as possible; the good response to steroid supports to the diagnosis of tumefactive NBD. If there is not good response, then, surgery should be planned as soon as possible. Although most patients have inflammatory infiltration in biopsy material why some cases do not have any inflammatory cell infiltration in acute lesion area needs to be clarified in further research.

On behalf of all authors, the corresponding author states that this research complies with the guidelines for human studies and animal welfare regulations. The subject in our case report has given informed consent and we confirm that the study protocol has been approved by the institute's committee on human research.

On behalf of all authors, the corresponding author states that there is no conflict of interest.