Introduction: Vitamin C, solvent in water, is necessary to synthesis and to keep collagen, and also is an intercellular surrounding material of body tissues, blood vessels, cartilages, bones, teeth, skins, and tendons. It is able to improve the protective mechanism of immune system, and wounds. Also, it is necessary to rehabilitate wounds and resistance against infection. This study makes an attempt to define the effect of topical vitamin C on improving second-degree burns.

Materials and methods: In this clinical trial, 30 patients with second-degree burn referring to burn ward of Sabzevar Vasei Hospital were adopted. According to the defined volume, two groups were adopted on a patient in this study. The dressing of wounds was changed once a day and then the wound was washed. The parameters concerned with burn were considered in 1st, 3rd, 7th, and 14th days by applying Bates-Jensen tools of evaluating burn. SPSS-16 software and ANOVA test of repetitive measures were applied to analyze data.

Findings: In this study, participants have got an age average of 43.03 ± 11.90, 60% of participants were composed of men, and the other 40% were women. The results of ANOVA Test showed repetitive measurements. The average of final score of burn between two types of cures was statistically significant (P=0.047). In other words, there was a significant difference on improving the burn between two groups, and Vitamin C takes a significant effect on improving the burn.

Damages caused by direct or indirect contact with thermal, chemical, electrical or radiant sources are called burns [1]. In medical sciences, healing burn wounds is considered a major problem and it would be great to find a medication or substance to heal these wounds with the least side effects [2]. According to statistics, 2.5 million Americans suffer from burn damages each year; among which, nearly 100,000 people are hospitalized and more than 10,000 die due to the side effects. It has the second highest mortality rate after road traffic accidents [3]. The proportion of deaths from burns to all deaths in Iran is almost 3 times larger than that of the Eastern Mediterranean countries and 2 times larger than the global average [4]. Burn management often focuses on caring for the burned tissue. Increasing our knowledge of the molecular and cellular healing mechanisms of skin tissues leads us toward the development of new therapeutic agents and tissue dressings. The main aim of wound care is to promote and to improve wound healing through epithelization [5]. Today, various types of dressings are used to improve wound healing. Nurses are responsible for changing dressings [6] and as wound care and dressing change coordinators, they should consider any changes or improvements in the wound-healing process in their care plan.

In burns, surface secretions and tissues are accumulated, and keratinocyte migration is delayed. Therefore, the epithelial cell reconstruction of is also delayed. Cleansing is another form of burn care. Burned tissue is a non-living tissue with no blood circulation; hence, white blood cells, antibodies and antibiotics cannot reach the site through the bloodstream and thus, it is a suitable site for microorganisms to grow. Therefore, topical antibiotics should be used to control infection in these wounds. For over 50 years, silver has been used with grate bactericidal and bacteriostatic properties and excellent curative impact on burn injuries [7].

Pain, irritation, itching, rash and reversible leukopenia are among the common side effects of silver sulfadiazine [8]. Many synthetic medications used to treat wounds are expensive. They are also associated with problems such as allergies and drug resistance; thus, researchers are trying to find alternative medications to improve healing process and to reduce treatment costs [9].

Vitamin C can enhance the protective mechanism of the immune system to accelerate the healing process [8]. This vitamin protects the skin against ultraviolet rays, free radicals and damages and besides its anti-inflammatory effect; it is also a major agent in depigmentation of skin [10]. 250-500 mg of oral vitamin C is prescribed for patients under the age of 13 and up to 1000 mg/day is prescribed for those over 13 years old [11]. Topical vitamin C reduces inflammatory responses [12]. In addition, vitamin C solution is necessary to cross-link collagen molecules to enhance tissue strength. Finally, it stimulates collagen genes to synthesize collagen in order to heal the wounds [13]. Previous studies on pigs have shown that using 10% vitamin C solution increases the concentration of this vitamin in the skin [14]. Moreover, the positive effects of different fruits such as kiwifruit and jujube on burn wounds have been proven; fruits which are mainly composed of vitamin C [4,15]. Various studies have demonstrated the role of fatty acids and antioxidants, such as vitamin C, in accelerating the wound-healing process [15]. Numerous evidences have proven the significant effects of oral administration of vitamin C on wound-healing process and also the effects of topical application of vitamin C-containing fruits on burn wounds. In this regard, this study aimed to investigate the effect of topical administration of vitamin C solution on patients with second degree burns.

In this clinical trial, 30 patients with second-degree burns in two or more organs or a limb widely, admitted in the burn ward of Vasee hospital of Sabzevar was chosen. Patients with the knowledge of what will be done completed the consent form of the study.

According to the multiple factors involved in the restoration or wound infection, two research groups, were choose parallel, so that the routine use of ointments (sulfadiazine) and the Vitamin C along with silver sulfadiazine will be done on the same patient, but in the two symmetric or two separate parts of body. The maximum level of a limb which was compared with other organ or part of an organ was considered 20%. The depth of each areas compared were also quite similar. Wound at every step was observed and reviewed by a subspecialty of plastic surgery. After debridement and washing with water and normal saline solution, the limb or a section of the burned wound dried with sterile gauze. Then silver sulfadiazine ointment 1% with a thickness of 1.5 mm was laid by sterile gloves. On the other limb or another part of the body that was under study, after washing and drying like the previous step, Vitamin C 10% solution was applied on the surface of the wound using a sterile swab to a maximum area of 225 square centimeters. Then silver sulfadiazine 1% ointment with sterile gloves and a thickness of 1.5 mm was used and burned wound was dressed. We used 5 ml vials contained 500 mg of vitamin C manufactured by Daroopakhsh Company.

In this study wound healing was assessed on days 1, 3, 7 and 14 after burning. The wounds were accurately evaluated by a specialist using Bates-Jensen checklist after opening the dressings for replacing a new dressing. For controlling the observer bias, digital photos were taken during treatment and at the first opportunity the photos were examined by the specialist. The checklists were completed and improvement of the two organs were compared with each other.

The Bates-Jensen is a validated wound assessment tool, A paper format of the BWAT is used in many healthcare settings as a means of standardizing wound assessment and documentation of wound status. It is also used to measure the outcomes of current treatment [16] that consists of 15 phrases, of which two phrases; the location and shape of the wound have not been scored. The scale composed of five parts and 13 items, each item rated on a Likert scale from 1 to 5, the lowest score represents the best and the highest score reflects the worst situation. The healing process was studied by analyzing the obtained scores. On each item, the ulcer was given a score of one to five Then scores are added together. To determine if the wound is improving or not, the resulted score with date mention was marked by a cross sign on the wound spectrum line so that, score 1, 13 and 60 represent healthy tissue, wound reconstruction, wound erosion respectively. The Bates-Jensen wound assessment tool was validated by previous studies in Iran [17,18].

After collecting and encoding the data was entered into computer and after monitoring and ensuring of the accuracy of the stored data, analysis was performed using SPSS 16. Repeated measurement ANOVA analysis of variance was used to investigate the effect of vitamin C on wound healing. Krowith-Mokhly test was used to evaluate the homogeneity of variances.

Study protocol was approved by ethics committee of the Sabzevar University of Medical Sciences (approval number: IR.MEDSAB.REC.1394.60), approved the study protocol and permission was obtained from hospital officials. Moreover, objectives of the study were explained to participants and written informed consent was obtained from all patients prior to the study. Patients were allowed to quit the study at any times, and researchers were assured whether the study objectives were in line with the values and beliefs of participants. Also, researchers were obliged to inform the officials and participants about the results of the study. IRCT code of current research is IRCT2015101224487N1.

A repeated measures ANOVA was used to investigate the effect of topical administration of vitamin C solution on patients with second degree burns. Mauchly's test was used to test the assumption of sphericity and considering the p-value ?0.000; the assumption was rejected. Therefore, Greenhouse- Geisser correction was used to adjust degrees of freedom. 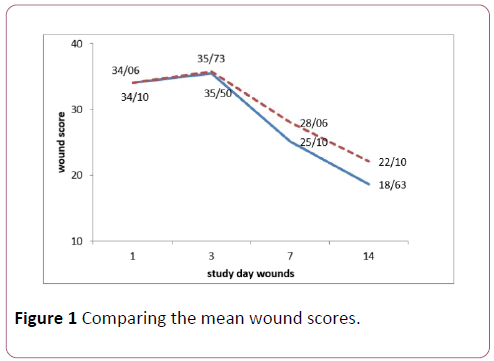 Regarding the time effect, time had a statistically significant effect on the mean total scores of wound and there was a significant difference between the two groups, in terms of the mean total scores of wounds in the first, the third, the seventh and the fourteenth days (P=0.000, F= 525.156); in other words, different days or times had different effects on wound-healing process.

Analyzing the interaction effect of dressing type and time showed that there was a significant difference between the two groups, in terms of the mean total scores of wounds in the first, the third, the seventh and the fourteenth days (P=0.000, F=8.649); in other words, different days had different effects on wound-healing process (Table 1).

Based on the results, there was a significant difference between the two groups, in terms of wound healing rates. Time had a statistically significant effect on the mean total scores of wound and topical administrations of vitamin C solution had a higher impact on wound-healing process than the control group.

Abbaspour and Khaksari conducted a study entitled “the effects of topical application of Kiwifruit on the healing process of burn wounds in rats”. They observed red and transparent granulation tissues in the kiwifruit group, with an average of 2.2 days after debridement procedure. Kiwifruit removed necrotic tissues faster than Elase ointment and wound epithelialization and healing was facilitated [4]. In their study, items including: improvement in granulation, necrotic tissue and epithelialization of burned tissue were observed which are consistent with the present study.

Lima et al. conducted a study entitled “vitamin C for healing skin wounds in rats”. In the intervention group, they observed less inflammation, more granulation tissues, fewer macrophages and a higher number of new vessels [19]. In this study, the level of inflammation and the number of collagen fibers and vessels were examined using microscopic methods; however, we did not examine them in the present study. Both studies concluded that vitamin C can improve the granulation tissues.

Vitamin C or ascorbic acid is the most effective watersoluble antioxidant [22]. Its natural concentration in human plasma is 0.8-1.6 mg/dl [23]. Vitamin C can alone reduce the need for fluid resuscitation in patients with burns [11]. Topical Vitamin C can also reduce inflammatory reactions [12].

The limitations of this study were lack of burn patients with bilateral burn or long burn wounds which resulted in prolonged duration of sampling in this study. We recommended that future studies be conducted in big burn hospitals with more samples available. We tried to control the effect of confounding variables by designing a-clinical trial in which each patient was his/her own control to explore only the effect of vitamin C on burn wounds.

The Sabzevar University of Medical Sciences provided funding for this research project. Especial thanks of all patients who participated in this study. We are sincerely grateful of the unwavering support of Vasee hospital of Sabzevar.