Yawning As a New Potential Diagnostic Marker for Neurological Diseases

The first yawn of the day is usually when we awake to stretch our intercostal muscles surrounding our lungs to bring in more oxygen. Many of us recognise yawning as a sign of tiredness or boredom yet we also yawn before that important job interview. We contagiously yawn when our pets yawn and because we are empathetic towards another yawning human being and therefore, most of us can relate to yawning.

Yet the physiological apparatus and exact location of our yawning response is uncertain. So much so, that yawning has been the debate of neuroscientists and philosophers since 400 BC when Hippocrates wrote about yawning in De Flatibus Liber (A Treatise on Wind), “because the large quantity of air ascends all at once, lifting with the action of a lever and opening the mouth, the accumulated air in the body, like steam escaping from hot cauldrons, is violently expelled when the body temperature rises” [1].

Hippocrates’ theory was not so far from reality but the focus of the study of yawning on is on our body temperature which is lowered when we yawn and thus protecting us from critical brain temperature rises especially when we become very fatigued. A common symptom of multiple sclerosis (MS) is fatigue [2] which is also associated with excessive yawning and a rise in brain temperature, governed by a small structure in the top of the brain, the hypothalamus [3,4]

Temperature regulation and circadian rhythm is the responsibility of the hypothalamus which is intimately linked to two other body structures, the pituitary gland, also situated in the brain, and the adrenal glands which secrete adrenaline. The hypothalamuspituitary- adrenal (HPA) axis helps us produce enough hormones to protect against stress and provides us with readiness for physical activity.

Yawning is exhibited in many different situations and it is because of this that it has made yawning so difficult to research resulting in its origin being so allusive. Anecdotally, yawning has been seen in response to migraine headaches; following excessive fatigue or sleepiness [5]; after ingesting “magic mushrooms” whose active ingredient is psilocybin; following taking the antidepressant Prozac; after an anxiety or panic attack; after seeing images of animals and humans yawning; after reading an article about yawning!

The link between excessive yawning and neurological disease has been noted elsewhere. For example, Lana-Peixoto, et al. [6] found that excessive yawning was the presenting symptom of five patients with neuromyelitis optica spectrum disorders (NMOSD). Brain MRI was abnormal and most frequently showed brainstem and hypothalamic lesions. The authors conclude that pathological yawning may be a neglected although not a rare symptom in NMOSD. Excessive yawning is also noted in adrenal insufficiency [7]; this is thought to occur because of an irregulation of adrenaline and cortisol, both actively involved in the HPA-axis. It is probable that other neurological diseases such as Parkinson’s disease and Motor Neurone Disease may also be implicated in the HPA feedback loop.

The Thompson Cortisol Hypothesis [8] is the first evidence-based report that links the naturally produced protective “stress” hormone, cortisol, with yawning, and demonstrates that cortisol rises when we yawn. Produced by the zona fasciculate of the adrenal cortex within the adrenal gland [7], it is suggested that the rise in cortisol level triggers our yawning response. Implications of this research are that yawning is an important mechanism for controlling hormone regulation and hypothalamus temperature regulation.

Physicians working in the rehabilitation of stroke patients have reported on significant findings from yawning stroke patients [9]. Sir Francis Walshe, a British neurologist, first reported on patients with lesions in the brain stem region who could raise their paralyzed arm when spontaneously yawning [10]. This has been evidenced since and consistently, by others [11-13] and particularly, in patients with left hemiplegia, the yawning response has been attributed to pseudobulbar syndrome [14]. Swallow reflex and yawning have been postulated to be temporally related in a study that considered gape, smile and yawning responses [15]. Participants were observed to swallow directly after yawning; again suggesting that the brain stem region might be the commonality between both reflexes. Findings supporting the presence of common neuroanatomicophysiological pathways for spontaneous swallows and yawning have also been reported [16].

Mental Attribution Theory [17,18] has been presented as the reason for us contagiously yawning as we seem to be empathic to others who yawn, especially when we perceive our belonging to a particular social grouping and yet it seems that yawning is so important to our maintenance and regulation that it does not wait until we are born. In fact, it happens in the womb [19].

Consistent reports have shown photographic evidence of yawning in the foetus, reinforcing the fact that it is one of the first crucial developments we make. New-born babies yawn more frequently than toddlers do, since sleep deprivation increases the chances of us yawning and makes us more susceptible to the effects of stress and fatigue [20].

Yawning is not confined to humans either, with most vertebrates experiencing yawning perhaps because of the need to raise arousal and the level of alertness. Universal yawning seems to be found in vertebrates in association with arousal but also with sleep, hunger and satiety [21]. ‘Emotional yawning’ has been reported in animals visiting the veterinary surgeon, in elite athletes and actors before performing, and in parachutists about to jump [22].

From fMRI studies, communicative yawning, such as in contagion, appears to involve the frontal and parietal lobes, insula and amygdala [23-25], and has been postulated to be related to the mirror-neuron system [26]. Interestingly, temperature contagion has been evidenced in participants observing and rating others whose hands were immersed in ice cold water [27]. Hence, it is possible that yawning and temperature, seen to be linked in conditions such as MS, may also be subject to contagion and empathy.

Regardless of the function of the yawn, it is probable that the critical threshold level of cortisol is reached because of fatigue, empathy, or sleep deprivation, to elicit the yawning response. Electromyography (EMG) activity in the jaw muscles is increased which in turn regulates the further production of cortisol and also of adrenaline from the adrenal glands [28]. Feedback via the HPA-axis continues to regulate cortisol and adrenaline production within the closed loop

82 volunteers (28 male, 54 female) aged between 18-69 years were recruited from students and the research volunteer pool at Bournemouth University using the computerised recruitment system (SONA), and Facebook. All participants were properly consented according to code of conduct and research guidelines, and exposed, under randomised controlled trials guidelines, to three conditions intended to provoke a yawning response-photos of people yawning; boring text about yawning; short video of person yawning. Comparisons were made with people exposed to the same conditions but who did not yawn.

Saliva samples were collected at start and again after yawning response, together with electro-myographical data of the jaw muscles to determine rest and yawning phases of neural activity. If there was no yawning response, then a second saliva sample was taken at the end of the experimental paradigm. Cortisol levels are easily detected in saliva and it is a far less intrusive method than intravenous collection. Presence of cortisol in saliva is highly correlated with blood assay and it is also cheaper to analyse in the laboratory. A yawning susceptibility scale (questionnaire designed for this study), Hospital Anxiety and Depression Scale (HADS) [29,30], General Health Questionnaire GHQ28 [31-33] and demographic and health details were also collected from each participant.

Exclusion criteria were: chronic fatigue, diabetes, fibromyalgia, heart condition, high blood pressure, hormone replacement therapy, multiples sclerosis, and stroke. Between- and withinsubjects comparisons were made using t-tests and correlations using the SPSS package [version 22]. This enabled a comparison to be made between yawner and non-yawner participants as well as between rest status and yawning episodes.

The mean age of participants was 27.3 (sd=10.42). There were no significant differences between groups in terms of age, HADS anxiety and depression scores, and GHQ28 scores.

Using analysis of variance (ANOVA), there was high significance between the groups when comparing sample 2 (saliva cortisol), indicating that non-yawners differed significantly from yawners in their cortisol levels, F (1, 78)=4.454, p=.038 (Figure 2). 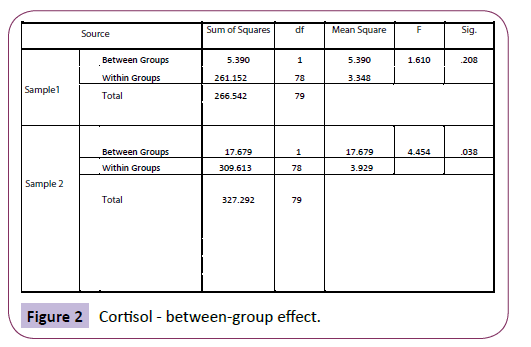 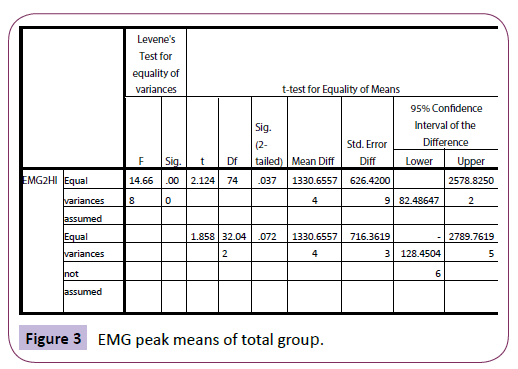 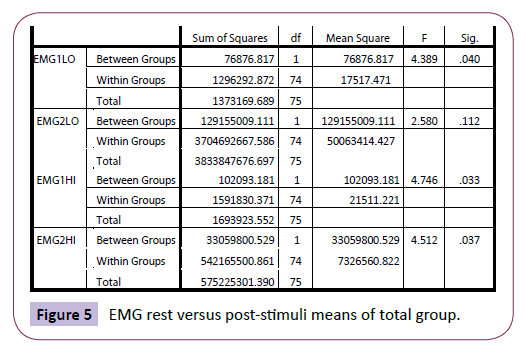 Yawning susceptibility scores were not normally distributed and did not show significant differences between the two groups, perhaps due to insufficient sensitivity of the measure.

Power and effect sizes were computed based on repeated measures t-tests for both the yawning and non-yawning group.

There are several interesting findings of this study, which are consistent with the Thompson Cortisol Hypothesis. Significant difference in saliva cortisol levels for those who yawned, between sample one and sample two, were found, which lends support for the hypothesis. No significant difference was found for the nonyawners between saliva cortisol sample 1 and sample 2. EMG activity also increased with elevated cortisol levels and when yawning.

Neurological diseases are complicated because they present with different ranges of symptoms and severity. However, it is intriguing that diseases are often exacerbated by stress and thus by fluctuation in cortisol and adrenaline levels. Since both naturally occurring hormones are involved intimately in the body’s HPA-axis, it is probable that they also play a part in regulating the effects of neurological disease. Other researchers have alluded to the fact that a common symptom in several neurological conditions and diseases is excessive yawning. For example, in multiple sclerosis, fatigue often gives rise to excessive yawning together with brain temperature rise3. In brain-stem ischaemic stroke, patients who excessive yawn are seen to execute an involuntary rise of their affected “paralyszed” arm [11,13]. In Parkinson’s disease, it is has been long considered to be effective to regulate serotonin as well as dopamine levels, and it is possible that cortisol levels may also have an interaction with the overall homeostasis of hormones [4,7,8]. The Thompson Cortisol Hypothesis provides an explanation for excessive yawning, and links cortisol with this reflex behaviour. The extent to which they are involved in each neurological disease and condition is yet to be investigated.

It is understood that cortisol acts to protect our body against stress and plays a role in the regulation and balance of hormones released within the HPA-axis. The yawn response may give rise to an increase in cortisol levels to provide symptom relief such as in lowering brain temperature as proposed by Gallup [3]. This may be the mechanism involved in the excessive yawning of people with multiple sclerosis via the hypothalamus as temperature regulator.

To understand the extent to which brain temperature may be regulated by the hypothalamus would require temperature monitoring around the surface of the skull together with induced fatigue paradigms to discern threshold levels of cortisol release. The author is leading a team in the UK and in France (Université Paris X Ouest Nanterre La Défense; Hôpital Universitaire Amiens; and Jules Verne Université de Picardie) to conduct a series of fMRI studies involving people with multiple sclerosis to analyse fatigue, temperature moderation and yawning-cortisol response. It is hoped that this with further our limited knowledge of the complex yet intriguing mechanism that we see as simply yawning.

Yawning and cortisol is of interest to clinical scientists, practitioners, neurologists and neuroscientists. Whilst still presenting a scientific conundrum, it has presented as a fascination for centuries but is now emerging with potential clinical and neuro-scientific importance, especially in the domain of diagnostic biomarkers. Clearly, further research is indicated; particularly, mapping the frequency and variance in cortisol levels in different neurological diseases.

However, it is fitting that this ancient mechanism, common to most of us that has been reported for many centuries, is perhaps a breakthrough for modern neuroscience and rehabilitation.

Bournemouth University Research & Ethics approval granted: BU-KAPP06-09/13. Protective measures were put in place for collection and analysis of saliva samples; data collected was made anonymous and the right of participants to withdraw from the study was upheld.

This research received funding of £10 000 from the host institution, Bournemouth University, UK, to support the purchase of equipment and the analysis of samples.