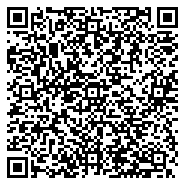 Behavior of Necrotizing Enterocolitis in new borns in a Neonatal Intensive Care Unit Monteria, Colombia, between 2015 and 2018

Introduction: Necrotizing enterocolitis (NEC) is a frequent pathology in newborns (NBs) that generally require attention in the neonatal intensive care unit (NICU). There are few data about the incidence in Latin America and Colombia since it is difficult to establish a timely diagnosis and hospital records do not contain accurate information. The following descriptive, retrospective and quantitative study analyzes the incidence, clinical characteristics, diagnostic methods and treatment of necrotizing enterocolitis in newborns from a neonatal intensive care unit of a clinic in the city of Montería.

Objective: To determine the incidence, clinical characteristics, diagnostic methods and treatment of newborns with NEC hospitalized in the NICU in order to provide therapeutic recommendations.

Material and methods: A descriptive, retrospective study, with a quantitative approach, including 54 medical records of neonates with NEC born in a private clinic in the city of Montería, Colombia and admitted to the NICU between June 2015 and December 2018. The statistical analysis was performed with SPSS and R Studio software.

Conclusions: A history of hypertensive disorder of pregnancy was prevalent in NBs with NEC. There was a higher incidence than that reported in the literature of affected term newborns. The use of empirical antibiotics for a long time was identified as a risk factor. A specific feeding protocol should be established according to the individual risk factors and the perinatal characteristics of the newborn that includes the use of breast milk as the first option.

Necrotizing enterocolitis is a common pathology in newborns that generally requires care in the neonatal intensive care unit [1]. It is the most frequent cause of gastrointestinal disturbance, becoming a medical-surgical emergency, in which adequate and timely treatment can reduce the need for surgery, complications, and fatality [2]. In the 90s until 2000, an estimated mortality for NEC was reported internationally between 5 and 30% depending on the country and level of complexity of the NICU, and can reach up to 100% in newborns under 700 gr and approximately 45% in RN between 750 and 1000 gr [3,4]. There are few data on the incidence of NEC in Latin America and Colombia, given that it is difficult to establish the diagnosis in a timely manner and precise information records are lacking in most hospital centers. For the year 2010 in Colombia, a study was carried out in the city of Cali where 32 newborns who were diagnosed with NEC were included, finding an incidence of 2% for this disease [5]. It is possible that in our environment these figures are higher due to the high rates of maternal and perinatal mortality that are registered in the department of Córdoba and that are linked to poor prenatal control, a risk factor for premature birth and therefore for NEC [6].

The following retrospective descriptive study, with a quantitative approach, was carried out during the period from June 2015 to December 2018, in which 11,571 births were attended; of which 1,234 required care in the neonatal intensive care unit and these 54 patients were diagnosed with NEC, whose medical records were entered into the study.

NEC was defined as 1) two or more of the following signs: abdominal distension, abdominal pain on palpation, occult or macroscopic blood in the stool, pathological gastric residue: boring or bilious, abdominal mass, erythema of the abdominal wall.

The information collected was entered into a Microsoft Excel database with the variables of interest in accordance with the study objectives. A descriptive and inferential statistical analysis was carried out with the SPSS and R Studio software.

The Apgar score> 7 at minute was recorded in 48% of the NBs. 11.1% had some degree of asphyxia evidenced by Apgar less than or equal to 6. The reason for admission to the NICU was respiratory distress in 72.2% of the cases, followed by suspected NEC in 18.5% of the cases, as shown in Table 1.

Table 1: Characteristics of the study population.

Maternal age ranged from 13 to 40 years, with an average of 25 years. 81.5% of the children were born by emergency caesarean section and the most frequently encountered maternal disease was hypertensive disorder of pregnancy with 46.3%, followed by premature membrane rupture greater than 18 hours with 16.7%. When crossing the variable hypertensive disorder of pregnancy with gestational age and birth weight, it was found that there was a statistically significant association between these variables, with a value of p-0.05, evidencing the association between the mother's hypertensive disorders with the prematurity of the baby. New-born with NEC.

Upon admission to the NICU, 35.2% of the neonate’s required supplemental oxygen for invasive mechanical ventilation, 16.7% were admitted to non-invasive ventilation by CPAP mode. Figure 1 shows the percentages corresponding to the supplementary oxygen administration method that these patients received (Figure 1). 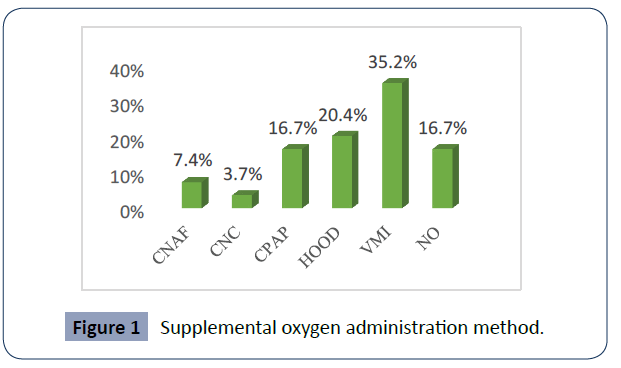 The empirical antibiotics most widely used at admission were Ampicillin plus Gentamicin in 74.1%. In these children, antibiotic use was indicated at the beginning of care in the NICU due to the identification of risk factors for sepsis. 24.1% of the newborns did not require antibiotic therapy upon admission. It was identified that at the time of the diagnosis of NEC, 52.1% of the NBs had 4 to 7 days of antibiotic management for sepsis with an average of 5 days.

Regarding the feeding patterns, 61.1% were fasting and 38.8% of them received some type of milk at the time of the onset of clinical manifestations. 72.2% received formula milk while only 27.8% received breast milk. The infants had a mean fasting time of 6.7 days, with a range of 29 days and a standard deviation of 6 days. A statistically significant association was found between the fasting days of the children with respect to their gestational age at birth with a value of p-0.05. Of all those who were fed, 50% received a low volume of milk between 10 - 19 cc / kg / day at the time of suspicion of NEC.

The most frequent clinical manifestations were abdominal distention in 88.9%, and pathological gastric residue in 70.4%, while vomiting and bloody stools were manifested in 33.3% and 3.7%, respectively. For its part, the most frequent radiological manifestations were interase edema in 94.2% and dilation of intestinal loops in 81.1%, and Pneumatises and Pneumoperitoneum were presented in 5.8%. Figure 2 Hemogram and CRP values of neonates with NEC.

Table 2: Antibiotic therapy used in the treatment of neonates with NEC.

The incidence for NEC in this study was 4.4%, which is in accordance with that reported in the literature, where figures are estimated between 1 and 15% 4 currently, an increase in NEC cases in full-term new-borns has been reported in the last decade. In this study, full-term new-borns with necrotizing enter colitis are 22.2% of the cases, surpassing the reports in the literature where there is an incidence in this group of 10 to 15%. [7, 8]

Advances in knowledge about the genetic predisposition of newborns [9]. The alteration in the intestinal microbiota [10] and pro-inflammatory mediators [11] has contributed to a better understanding of the pathophysiology in NEC. It is also known that the low Apgar score at birth [12]. The hypertensive disorder of pregnancy [13]. The administration of high concentrations of oxygen, the use of formula milk and the empirical postnatal use of antibiotics [14, 15]. Are factors contributors to the development of necrotizing enter colitis. The literature describes the appearance of NEC with transfusions of blood products [16]. However, in this study no relationship was found between blood transfusions and the appearance of necrotizing enters colitis.

Formula milk was widely used in the new-borns in the present study, which has been identified as a risk factor for NEC, [17]. In contrast, breast milk reduces the incidence of necrotizing enter colitis even in neonates with extreme prematurity [18]. In the absence of milk from the same mother, the advantage of administering donor breast milk without great risks and with multiple benefits has been described [19].

It is currently known that starting enteral feeding in new-borns early does not increase the risk of NEC or mortality and represents great advantages for these patients [20]. However, in this study the average start of feeding was at 6.7 days old with low volumes of 10 to 19 cc / kg / day. The standardization of a feeding protocol that takes into account gestational age, birth weight and the risk factors of the new-born has shown great utility in the hospital centers where it is implemented [21, 22].

The disease was early onset with an average of 4.6 days of life at the time of diagnosis. There are world epidemiology reports where the age of onset is later in most cases between 8 and 10 days of life.

In this study, the most frequent symptoms were pathological gastric residual, abdominal distension, vomiting and, ultimately, stool, which can be initially specific and confused with sepsis in some cases. The least frequent clinical sign found was blood in the stools, despite the fact that it is a predominant sign in the literature.

Necrotizing enter colitis is of great impact and deserves importance in neonatal intensive care units due to its high mortality and comorbidity. The diagnosis of the disease must be predominantly clinical since the laboratory tests in most cases are normal or nonspecific. Strict radiological follow-up should be carried out to identify possible cases that require early surgical management and thus avoid postponing the intervention once the hemodynamic compromise is reached, given the progression of the disease. Despite not being widely used, abdominal ultrasound can be useful in the follow-up of new-borns.

It is necessary to implement a specific feeding protocol for each new-born taking into account risk factors, gestational age and birth weight to help reduce the incidence of NEC. Breast milk is an important, inexpensive and irreplaceable tool and should be included in NEC prevention strategies in the NICU whenever it is available. More local and national studies should be carried out to establish precise and effective strategies to reduce its incidence, which has been increasing over the years.