The fetus in fetus (FIF) is a rare congenital pathology with less than 200 cases reported in the literature worldwide, in which a pregnancy with monozygotic twins one of them develops normally, while the other atrophies and it is inside the developed twin. The most frequent location is retroperitoneal; however, multiple cases have been described in the sacrum, mediastinum, skull and neck. We present a case of a 17-dayold female patient diagnosed with a congenital abdominal mass. After the extraction, an anatomopathological analysis was performed. There were multiple limbs, vertebral column, anencephalic cranial cavity, and the diagnosis of FIF was concluded.

Fetus in fetu is a rare congenital pathology, with an incidence of 1 in 500,000 births [1], in which there are 2 asymmetrical twins and the parasitic twin develops abnormally within the body of the host twin [2] This was discovered by Meckel in 1800 and defined by Willis in 1953, as a mass containing vertebral axis, frequently associated with other organs and limbs around this central axis [3].

It is believed that the development of this is related to the uneven division of totipotent cells in the blastocyst, this is how two monozygous twins do not completely separate and are joined by some area, which has been said to be the anastomosis of the vitellin circulation. One of these twins grows healthy while the other atrophies staying inside the twin healthy and completely dependent on him. It is unknown why twins do not separate properly [4, 6, 9], and this monozygous twin theory does not explain all cases of FIF, including cases characterized by the presence of multiple fetuses associated with a single host or an FIF associated with a teratoma, however, this is supported by the fact that studies of genetic markers and genotyping suggest that host babies and their fetish masses are genetically identical [5].

The overall incidence is 1 in 500,000 live births. In most cases, they are found in babies. Usually in FIF, the parasitic fetus is anencephalic and cardiac, but the limbs are described in 82.5% and the spine in 91% of cases [6]. The most common presentation is abdominal, more specifically retroperitoneal (80%) along the ventral midline, skull 8% and sacrococcygeal region 8% [7], however, cases have been reported in mediastinum, intracranial, sacrum, scrotum, neck and oral cavity [8], and tend to produce mass effect.

The diagnosis is sometimes not easy, it can be done by means of radiography, ultrasonography, tomography and magnetic resonance which is gaining prominence due to its high resolution, low irradiation and the non-use of a contrast medium [7, 9, 10], in some cases they can be underdiagnosed, being reported as teratoma, which is one of the differential diagnoses and whose differentiation is given by the presence of a vertebral organization with buds of the limbs and other organ systems [7], being of great relevance due to the malignant potential of the latter, this being refuted as a point of differentiation by some theories until now without solid foundations.

Although FIF usually occurs during infancy and early childhood before 18 months of age, a small number of case reports of patients with FIF during childhood, early childhood, and adulthood have been published [10].

This is a 17-day-old female patient born because of cesarean section with a prenatal diagnosis of intra-abdominal malformation at the renal level and polyhydramnios, who at birth had a globose abdomen. Abdominal ultrasound is performed that reports spaceoccupying mass with probable cystic appearance at the level of the left kidney, a scintigraphy is performed that shows kidneys in a normal position, left kidney increased in size, with a welldefined area of hypouptation that involves a large part of the kidney in the upper and middle regions of it, with minimal uptake area in the lower pole. She is taken to surgery to perform left nephrectomy, with the following findings: cystic mass, retroperitoneal location, with content of fetoid structures as seen in (Figure 1). There is a left kidney displaced by this mass towards the left iliac fossa, in addition there was the presence of two vessels in the fetus. The two vessels and the left kidney are preserved, mass is extracted finding in its interior cetrino liquid as seen in image 2, in addition the presence of a fetus with upper and lower extremities and two more joined fetuses is evidenced forming a mass effect where only limbs are distinguished, they are extracted and the sample is sent to pathological anatomy study with report of fetus in fetu. 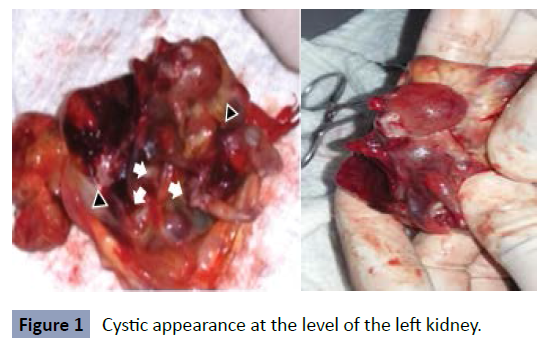 Figure 1: Cystic appearance at the level of the left kidney.

Fetus in fetu is defined as the condition in which a fetus of monozygous twins is incorporated during the separation process into the body of the other twin. It is a pathology of low incidence with few articles worldwide; In Colombia there are few reported cases, it is not clear if it is due to the low incidence of these or to an underdiagnoses of it [3].

It is pathology with a complex diagnosis, which also requires a high level of clinical suspicion. Among the differential diagnoses we have mainly the teratoma, of which it has been suggested that there is considerable overlap between the two conditions, and that both could represent two aspects of the same entity at various stages of maturation [11]. Mature teratoma may contain well-developed structures and sufficiently resemble a fetus, sometimes also called a fetiform teratoma.

The main characteristics to make a differentiation between both diagnoses are in the presence of a spine as a central axis, development of limbs, presence of anencephalic cranial cavities and in some cases organification. There are other theories that suggest that once the metameric cranio caudal pattern is established, many structures can survive beyond the disappearance of the rudimentary axis, and thus accommodating the concept of FIF as an organized form of teratoma, relevant in the prognostic value given the risk of malignancy of the latter [12]. However, as of 2000 about 90 cases of FIF had been reported of which 91% of cases had a spine, 82.5% had limbs, 55.8% had a central nervous system, 45% had a gastrointestinal tract and 40% had vessels. In all cases, the fetus was anencephalic and the lower limbs were more developed than the upper limbs. Thus, 82.5% of reported FIF cases fit one or both definitions offered by Willis and Gonzalez-Crussi. (2001) [13].

The FIF presents mostly retroperitoneal localization and the diagnosis is made during fetal development, birth and childhood, on the other hand, the fetiform teratoma is located in the ovaries of women of childbearing age in most cases [14].

In this case, a 17-day-old patient with a prenatal diagnosis of polyhydramnios and mass in the left kidney was presented. With the help of imaging studies, the diagnosis of cystic-looking mass with solid-liquid content inside is carried out, after its extraction multiple limbs are identified, with cartilaginous cavities that denote the shell, without brain content. In the pathological study of the sample in fresh and after fixation with formaldehyde, where the presence of a central axis is described as seen in image 3. Analyzing these characteristics and the criteria described by Willis in 1953, the diagnosis of FIF is made, ruling out the differential of fetish teratoma (Figure 2). 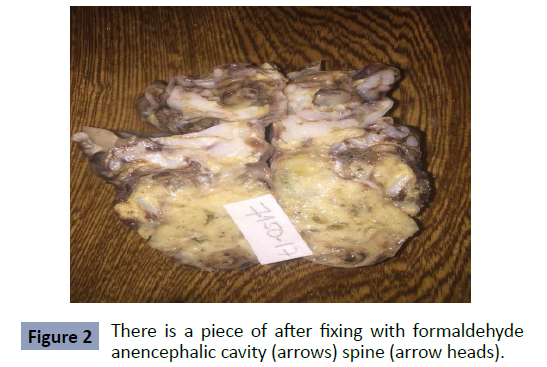 Figure 2: There is a piece of after fixing with formaldehyde anencephalic cavity (arrows) spine (arrow heads).