Iron Ferritin,TIBC and Reticulocyte count in cases of Haemolytic anaemia

Haemolytic anemia in which red blood cells are destroyed faster than they are made, this process of destruction is called as haemolysis. This leed to increase in iron and bilirubin content in serum as well as increase in reticulocyte count. It has been found that administration of iron in haemolytic cases is contradictory compared to Iron deficiency anaemia. So in order to prove this, a study has been designed with haemolytic cases which are given iron supplements it has been found that there is increase in reticulocyte count as well as ferritin rather than decrease post treatment. Therefore it can be said that iron supplementation in cases of haemolytic anaemia is of no use.

Haemolytic anaemia is a disorder in which red blood cells are destroyed faster than they can be made. The destruction of red blood cells is called haemolysis [1]. Red blood cells carry oxygen to all parts of your body. If you have a lower than normal amount of red blood cells, you have anaemia. Haemolytic anaemia may be caused by inherited conditions that affect the red blood cells. It's also caused by certain infections or if someone receives a blood transfusion from a donor whose blood type didn't match. There are many sign and symptoms which are linked with this anaemia this includes chills, fast heartbeat, known as tachycardia, Pale skin that may start to yellow, shortness of breath, weakness and fatigue, chest pain, yellow skin or whites of the eyes (jaundice), Dark urine [2].

Anaemia is a condition in which the body does not have enough healthy red blood cells. Red blood cells provide oxygen to body tissues. Normally, red blood cells last for about 120 days in the body. In haemolytic anaemia, red blood cells in the blood are destroyed earlier than normal. Some types of acquired haemolytic anaemia are short-term (temporary) and go away over several months. Other types can become lifelong (chronic). They may go away and come back again over time. There are initial laboratory tests for haemolysis which includes determination of haptoglobin, lactate dehydrogenase, peripheral blood smear, reticulocyte count measurement as well as measurement of unconjugated bilirubin and urinalysis [3]. There is decrease in haptoglobin while lactate dehydrogenase, reticulocyte count and unconjugated bilirubin increase while peripheral blood smear show abnormality which is based on the cause of anemia. Increased unconjugated bilirubin in these cases was due to increased haemoglobin breakdown.

High level of bilirubin in the blood may be a sign of haemolytic anaemia. High level of bilirubin also found in some liver and gall bladder diseases. Reticulocytes are increased in haemolytic anaemia. This type of anaemia destroys red blood cells before they would normally die, so bone marrow has to work overtime to replace them. A reticulocyte count measures the number of reticulocytes in the blood. Reticulocyte are red blood cells that are still developing.

Patient suffering from haemorrhage, having occult blood positive, known case of hepatic, cardiac, renal dysfunction along with pregnant and lactating mothers are excluded from the study.

For the determination of Iron, TIBC, ferritin and reticulocyte count blood was collected in plain vacationer, it was left for half and an hour to clot, then it was centrifuged and serum was separated. After this they are subjected to investigations for laboratory parameters. Blood samples were collected at the baseline as well as on the completion of the study which is at eighth week from baseline investigations [5]. Serum Iron was determined according to Ferro Zinc method without deproteinization, its biological reference interval is between 33.00 to 193.00 μg/dl while on the other hand total iron binding capacity measures the extent to which iron binding sites in the serum can be saturated as the iron binding sites in the serum are almost entirely dependent on circulating transferrin, this is really an indirect measurement of the amount of transferring in blood.

Taken together with serum iron and percent transferin saturation clinicians usually perform this test when they are concerned about anaemia, iron deficiency or iron deficiency anaemia. However liver produced transferin liver function must be considered when performing this test. It can also be an indirect test of liver function but is rarely used for this purpose. Its biological reference interval is between 135 to 392 μg/dl.

Decreased percentage of reticulocytes is seen in suppression of e.g by infraction or inflammation pure red cell aplasia, aplastic anemia and infective erythropoiesis. Ferritin [6] was determined by chemiluminsence immune assay. Ferritin is found in low concentrations and is directly proportional to the body iron stores,serum ferritin concentrations when analysed with other factors such as serum iron, iron binding capacity and tissue iron stores is valuable in the diagnosis of iron deficiency anaemia, anaemia of chronic infection and condition such as thalassemia and hemochromatosis that are associated with iron overload. Measurement of serum ferritin is particularly valuable in distinguishing non deficiency anaemia caused by low iron stores for those resulting from inadequate iron utilization. It biological reference interval is between 22 to 322 ng/ml.

While on the other hand reticulocyte count 7 varies in adult and children between 0.5% to 2.5% while in infants its value range between 2 to 5%. Increased reticulocyte is seen in case of neonates, ascent to high altitude, response to haemorrhage or haemolysis, shock or hypoxia, replacement of iron, vitamin b 12 or folic acid in a deficient case, recovery from bone marrow failure or suppression, bone marrow infiltration and idiopathic myelofibrosis. While in case of Iron deficiency anaemia its range is between 0.68 to 34.5 ng/ml while in other anaemia its value range between 13 ng/ml to 1390 ng/ml.

Dosage and administration of drug

Ferrous sulphate was given in tablet form 200 mg twice daily and that too in oral form and has to be taken with water after breakfast.

All the data will be presented as mean and standard deviation with 95% confidence interval. For the analysis between the groups students unpaired T test will be used. To find out the significant difference between the treatments, 80% statistical power and P value of 0.05 or below will be considered as statistically significant.

Serum Iron found in human body ranges between 33.09 to 193 mcg/dl. Serum Iron was determined by Ferro Zinc method without deproteinization. It has been found that after taking iron supplement its level got increased from 51.94 to 99.8 mcg/dl in cases of haemolytic anaemia. Blood samples were collected at the baseline and at the completion of the study, it has been found that there was significant increase (p=0.018) in serum Iron at post study (99.8 mcg/dl) (Figure 1). 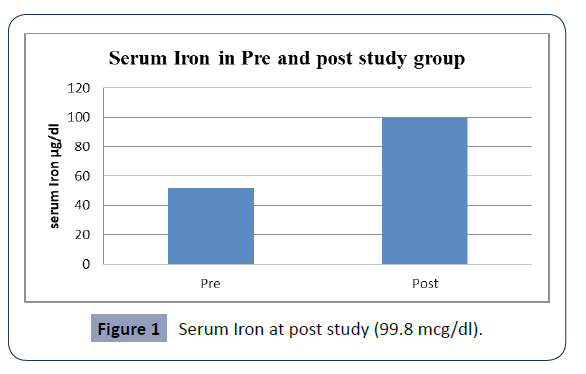 Serum ferrittin ranges from 19.54 ng/dl to 40.61 ng/dl after taking iron supplements. It has been determined by chemiluminiscenese immune assay technique and its normal range is between 22 to 322 ng/ml while category wise it has different values e.g in Iron deficiency anemia total observed value is between 0.68 ng/ml to 34.5 ng/ml while in other form of anemia its value ranges from 13 ng/ml to 1390 ng/ml, in iron overload 334 ng/ml to 8573 ng/ ml, renal dialysis it ranges 31.3 ng/ml to 1321 ng/ml while in chronic liver disease it ranges from 8 ng/ml–12826 ng/ml. It has been found that post treatment there was significant increase in serum ferritin (p=0.001) (Figure 2). 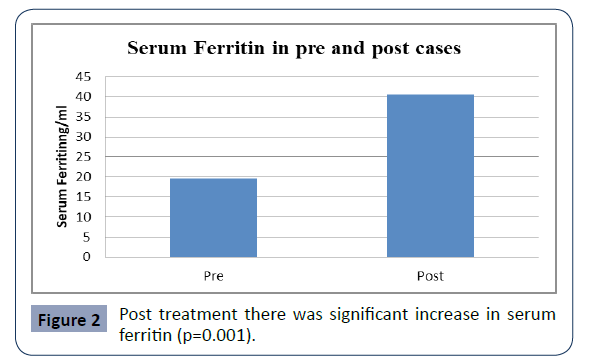 TIBC which is also called as total iron binding capacity measures the extent to which non-iron binding sites in the serum can be saturated. Because the iron binding sites in the serum are almost entirely dependent on circulating transferrin this is really an indirect measurement of the amount of transferring in the blood. Value of TIBC changes from 466.4 mcg/dl to 435.5 mcg/dl and it was found when comparison was made between baseline values and end of study values this decrease was found statistically nonsignificant ( p=0.354) (Figure 3). 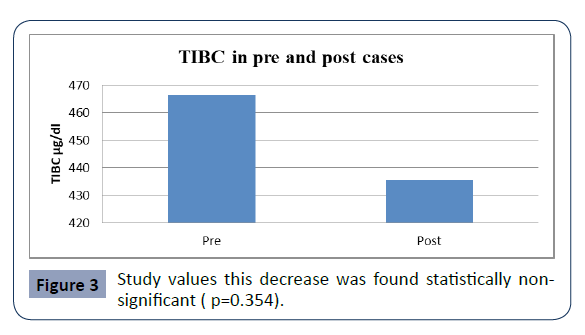 Reticulocyte count in adult and children varies between 0.5% to 2.5%, it has been seen that increased percentage of reticulocyte was seen in neonatal, pregnancy, ascent to high altitude etc. [7]. There was significant increase in reticulocyte count when comparison was made at the baseline and at the end of the study (p=0.025) (Figure 4). 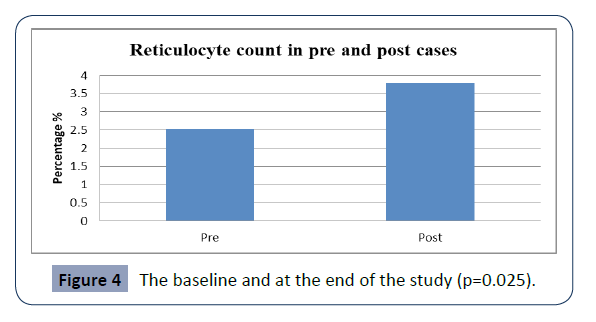 Haemolytic anaemia as the name suggests is anaemia caused by haemolysis or the destruction of red blood cells which further lead to increase in iron, bilirubin as well as reticulocyte count in serum. It has been found that normally red blood cells live about 120 days while in this type of anaemia they are destroyed earlier therefore high level of bilirubin is finding in this type of anemia. Here ferrous sulphate has been given to anaemia cases, it has been found that there is significant increase in serum Iron as the Iron given from outside went unused which contradicts Iron therapy.

Serum Iron was determined by Ferro zinc method without deproteinization while serum ferritin was determined by Chemiluminiscense immune assay technique. While on the other hand total Iron binding capacity got statistically decreased on the completion of the study (p>0.05,p=0.354).Reticulocyte which are immature red blood cells also increased significantly i.e. more red blood cells are formed, before completion of their life cycle they get haemolysed.