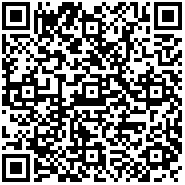 We report an isolated unilateral hypoglossal nerve palsy in a 59 year old gentleman. Following thorough investigation it became apparent that this was the first presentation of widespread metastasis. Our report emphasizes the importance of a systematic approach and investigation to rule out an underlying sinister cause.

Innervation of the extrinsic and intrinsic muscles of the tongue, excluding only the palataoglossus, is from the twelfth cranial nerve. The hypoglossal nerve is primarily motor in function and controls tongue movement, meaning palsy of this nerve can result in altered movement and appearance of the tongue, with swallowing and speech difficulties. Hypoglossal nerve palsy usually presents with additional neurological symptoms, its presentation in isolation is rare [1]. This was apparent following review of the literature which revealed mostly single cases in isolation and only a very limited selection of small case series having previously been published [2,3].

A 59-year-old gentleman presented to the Oral and Maxillofacial Department at Ashford and St. Peters hospital with a history of decreased tongue mobility. The patient complained of sudden slurred and difficult speech which began four months previously.

Medically the patient had well controlled hypertension and benign prostatic hyperplasia. Recent medical history included pneumonia which had resolved by the time of the first visit. Previous investigations prior to his visit to our department included a normal brain MRI: Magnetic Resonance Imaging, indicating that stroke and TIA: Transient Ischaemic Attack, was ruled out by the investigating specialist team.

Clinical examination revealed an abnormality of the motor function of the tongue causing left side deviation on protrusion (Figure 1). Sensory function was intact and no other neurological deficits were evident. Following palpation of the left submandibular triangle, a possible mass was detected at level 1b: submandibular nodes, of the neck. Futher investigations included further MRI from base of the skull to the clavicle as well as computerised tomography CT scan of thorax and abdomen. These revealed no mass or lymphadenopathy in the neck, however multiple pulmonary nodules and liver lesions, suggestive of widespread metastatic disease were detected. Figure 1:Left side deviation of the tongue on protrusion.

Subsequent investigations with a PET-CT (Positron Emission Tomography–Computed Tomography), confirmed a skull base lesion. The investigations revealed that the right occipital condyle was affected, which is likely to have compromised the right hypoglossal nerve within the hypoglossal canal likely to be the origin of the palsy. Furthermore widespread metastatic lesions in the lungs, liver, bone and muscle were identified (Figure 2). 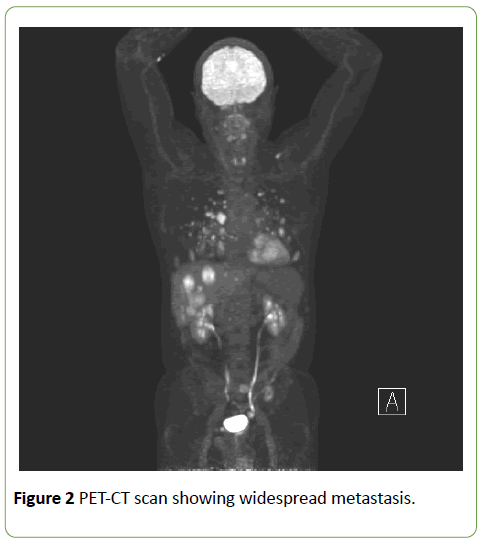 On the PET imaging, a visible FDG (Fluoro-De-Oxyglucose)- avid paravertebral mass at the level of the 9th thoracic vertebra was evident; therefore a core biopsy of this lesion was taken in order to obtain a tissue diagnosis. The tumour was originally thought to be consistent with a high grade sarcoma but following immunohistochemistry and a review of the case, it was confirmed as a grade 2 FNCLCC: Fédération Nationale des Centres de Lutte Contre le Cancer, leiomyosarcoma.

At the time of writing the patient is currently undergoing palliative radiotherapy and a primary malignancy has not been identified.

We have no conflicts of interest

The patient gave consent for the use of photographs for this paper.