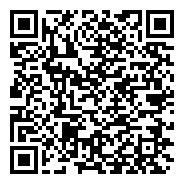 Prevalence of Anaemia in Muslim population

Anaemia is a majority nutritional problem across the globe; it develops due to lack in healthy red blood cells or haemoglobin. Prevalence of anaemia is higher among developing nations, because of low socioeconomic status. There is a significant relationship between anaemia and socioeconomic status, dietary modifications, nutritional supplementation, in addition compliance with consumption of iron and folic acid tablets. For this, study has been designed to study relationship between socioeconomic status and prevalence of anaemia among female Muslim population. Camp has been organized in Abul fazal enclave, Jamia Nagar, blood sample was collected from 105 Muslim female, which have low socioeconomic status. It has been found that 44.85% had mild anaemia and 42% had moderate anemia, which may be due to nutritional deficiency. Therefore there is a need for developing and implementing policies which improve and eliminate socioeconomic disparities which indirectly improves women health.

Anaemia develops when body lacks healthy red blood cells or haemoglobin. Haemoglobin makes important part of red blood cells which helps in binding oxygen. There are many causes linked with anaemia which includes blood loss, decrease red blood cell production and increased red blood cell breakdown [1]. A symptom of anaemia includes fatigue, skin pallor and shortness of breath, light headiness, dizziness or fast heartbeat. According to national cancer institute and national institutes of Health, anaemia can be classified into five grades. Grade 1, considered mild anaemia, having Hb from 10 g/dl to the lower limit of normal; grade 2 anaemia, or moderate anaemia, is Hb from 8 to less than 10 g/dl; grade 3, or severe anaemia, is below 8 g/dl; grade 4, is life-threatening anaemia; grade 5 is death (Table 1). In addition, Hb levels can vary according to a patient’s gender and race/ethnicity, with Hb levels 1 to 2 g/dl lower in women [2-4].

There are many types of anaemia which includes Iron deficiency, vitamin deficiency, haemolytic, sickle cell anaemia etc. out of which Iron deficiency anaemia is the most common anaemia. To diagnose anaemia basic tests like Complete Blood Count (CBC) is performed which includes measurement of red blood cells (hematocrit) and haemoglobin in blood. Normal adult hematocrit ranges between 40 to 52 percent for men and 35 to 47 percent for women while haemoglobin ranges between 14 to 18 grams per deciliter for men and 12 to 16 grams per deciliters for women. In addition Hb levels can vary according to patient gender and race/ethnicity with Hb levels 1 to 2 g/dl lower in women (Table 1).

Blood samples were collected from Muslim population of low socio economic status between ages of 25 to 50 years. Female population having pregnancy or glands disorders etc. were excluded from the study.

This studied was designed to study relationship between Socioeconomic Status (SES) and prevalence of anaemia among Muslim population, for this a camp was organized in Abul fazal enclave, Jamia Nagar, New Delhi by regional research institute of Unani medicine, New Delhi. Blood sample was taken from 105 Muslim females for haemoglobin estimation. Estimation of haemoglobin was done by Sahlis or acid hematic method by haemometer. Blood sample was added to N/10 hydrochloric acid, haemoglobin present in RBC is converted to acid hematic which is dark brown coloured and the colour formed corresponds to haemoglobin concentration in blood [5]. Graduated measuring tube was filled up to the bottom of graduation line with hydrochloric acid, 20 μl of blood is blown into the tube and water is added until the colour of the solution match the colour of the tests rods. The result can be read by diffused day light, 3 mins after adding the 20 μl of blood to hydrochloric acid.

About one third of the total world population is anaemic which makes one third of the world population around 2 billion people, amounting to over one 1 third of the world’s population are anaemic. Although anaemia is multi-factorial in etiology, most studies confirmed iron deficiency in >80% 2 cases of anaemia. It is especially common in women of reproductive age, particularly during pregnancy as the demand for iron increases about 3 six to seven fold. WHO reports 35–75% (average 56%) of pregnant women in developing countries and 18% of women from industrialized countries are anaemic. According to WHO criteria anaemia is classified as mild, moderate and severe. Hb in mild cases range between 11-11.9 g/dl, in moderate ranges between 8-10.9 g/dl, in severe it is lower than 8.0 g/dl. The prevalence of anaemia in the studied population was calculated under mild, moderate and severe heads. Total of 105 subjects were taken for the study, out of which 48 females have mild anaemia, 45 subjects have moderate anaemia, while only one case had severe and 11 cases have normal haemoglobin (Figure 1). 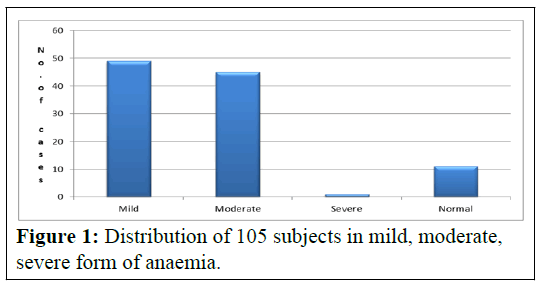 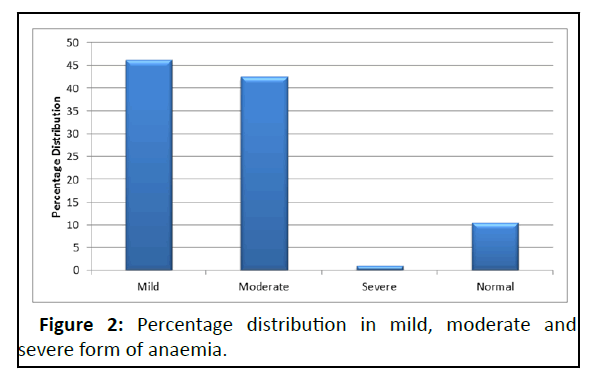 Adolescent girls belonging to lower socioeconomic groups showed high prevalence of anaemia than the girls belonging to higher socioeconomic groups and this was found to be statistically significant [7]. A notable relationship between anaemia and socioeconomic status strongly recommend the need for developing and implementing policies which improve socioeconomic disparities. Special importance should be given for developing corrective measures against anaemia. There is a need for regular supply for iron and folic acid tablets and for improving medication adherence regarding consuming these tablets.