Introduction: In the last decade, Staphylococcus aureus has been one of the main pathogens that has had a negative impact on human health, mainly in the pediatric population, given its particular virulence characteristics that give it a high capacity to produce a wide range of diseases, of which it is estimated that up to 70% of these are caused by community-acquired methicillin-resistant Staphylococcus aureus (CA-MRSA) without associated risk factors. The following analytical, descriptive and retrospective study evaluates and analyzes the prevalence rates of cause of admission and cases associated with pediatric infections caused by community-acquired resistant Staphylococcus aureus in a clinic in the city of Monteria, Cordoba, Colombia.

Objectives: To analyze the behavior of MRSA-ACS infections in the pediatric population in a clinic in the city of Monteria, describe the clinical characteristics, specify the antibiotic treatment regimen, and identify the susceptibility profile of community acquired methicillin-resistant Staphylococcus aureus isolates.

Materials and Methods: In the following descriptive, retrospective, analytical study, the records of pediatric patients aged 0-18 years, in a period of time established between February 2018 to February 2021 in a clinic in the city of Monteria were reviewed, demographic and clinical variables were reviewed; and the presence of diagnostic tests to determine the presence of the isolated microorganism.

Results: Infections caused by community-acquired methicillin-resistant Staphylococcus aureus (CA-MRSA) have an estimated prevalence of 37.5% in the pediatric population included in the study, in addition to a resistance to Oxacillin and Cefoxitin of 90%, which shows the great virulence capacity of this pathogen and the importance of the correct application of an adequate therapeutic treatment for it. Likewise, it is directly observed how the epidemiology of community staphylococcal infections has undergone radical changes in the last 10 years.

Discussion: The data found are similar to those reported in other studies. Skin and soft tissue infection is the most common type of infection caused by Staphylococcus aureus, being the most common manifestation of disease caused by methicillinresistant strains acquired in the community and skin abscess the main reason for consultation, also showing the increase in resistance to antibiotics used as treatment, always associated with the health environment.

Staphylococcus aureus (SA) is a frequent agent of infection in Pediatrics, capable of colonizing the skin and mucous membranes in 30% to 50% of children. It is of great importance due to its participation in different hospital and community pathologies, from skin and soft tissue infections to life-threatening invasive infections, due to the intervention of different virulence and pathogenicity factors, encoded by different genes that are expressed throughout its life cycle [1]. Their clinical spectrum ranges from relatively benign skin and mucosal infections, such as folliculitis and conjunctivitis, to life-threatening diseases such as meningitis, sepsis, endocarditis, osteomyelitis and pneumonia [2].

Currently, this microorganism is the main cause of nosocomial infections. Reports on this type of infections have multiplied in different regions of the planet and reveal that children are a particularly affected population [3]. In the 1990s there was a marked increase in the prevalence of methicillin-resistant S. aureus (MRSA), reflecting the emergence of resistant strains that spread inside and outside hospitals, so that both nosocomial and community-acquired MRSA infections became common. In Latin America, the first reports of cases of MRSA-acquired infections (CA- MRSA) took place in Uruguay in 2001, after which the different countries of the continent, including Paraguay, reported the presence of CA-MRSA, with methicillin resistance prevalence’s of 25% to 70% of the isolates [4]. Among the types of infection and clinical foci in Colombia, it has been shown that 54% of osteoarticular infections and 41% of skin and soft tissue infections are particularly frequent.

The characteristics of the pathogen itself, together with the increase in antibiotic resistance rates in recent decades, have led to the fact that infections caused by this pathogen are currently considered a public health problem [5]. The development of an infection by this etiological agent is mediated by the interaction of environmental factors, bacterial virulence and immune characteristics of the host, where the role of environmental factors is established by the contact of the health system, a factor that could be modified, while bacterial or genetic factors are not modifiable [6]

An analytical, descriptive and retrospective study was carried out, in which the records of all pediatric patients aged 0-18 years related to the SOFTWARE were reviewed. Dinámica Gerencial" belonging to a clinic in the city of Montería, Córdoba, with a diagnosis of community-acquired Staphylococcus aureus infections, during the period from February 01, 2018 to February 28, 2021. Patients with a diagnosis other than Staphylococcus aureus infection were excluded according to the availability of antibiograms performed, medical records of patients older than 18 years, medical records of patients who were admitted to the pediatric service of a clinic in Monteria before the period established between February 2018 or after February 2021, and patients with negative culture for Staphylococcus aureus.

The medical records were reviewed and information was collected on the variables age (days), sex, origin, admission diagnosis and the presence of diagnostic tests to determine the Etiology (culture of secretion, origin of the sample, antibiogram, blood culture). The isolated germs were defined as definitive or discarded Etiology according to the following criteria: Definitive: Growth of Staphylococcus aureus in secretion culture and blood culture. Discarded: Significant growth of a potentially pathogenic germ in discharge culture or blood culture other than Staphylococcus aureus. AMIES transport with activated charcoal and Valtek was used to isolate microorganisms in discharge culture and blood culture, respectively

The information collected was entered into a database with an adapted design, through which the grouping, determination and quantification of the variables established in the study were generated. The characteristics of the population, the most important antibiotic sensitivity patterns were described and the results were analysed by means of descriptive statistics, absolute and relative frequency measures. Continuous variables were described with measures of central tendency and dispersion; qualitative variables were described in terms of frequency and proportions; finally the data were processed and interpreted in the official office Excel 2016 tool 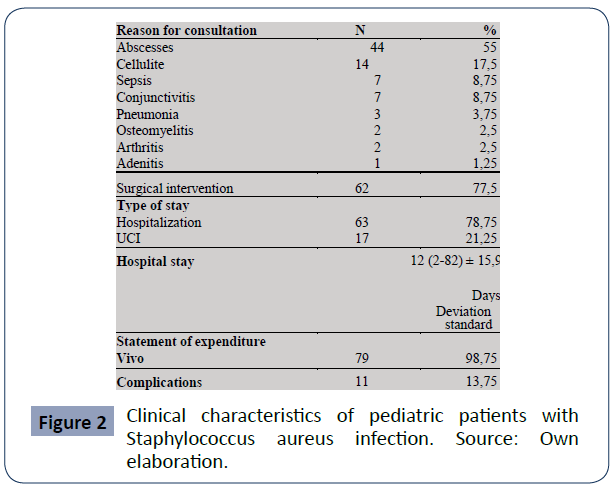 The antibiotic susceptibility of Staphylococcus aureus isolates was higher than 62 % of the antibiotics tested, while the resistance of the microorganism was 37.5% to Oxacillin, 35% to Cefoxitima, 18.75% to Clarithromycin, 16.25% to Clindamycin, 17, 5% to Erythromycin and 11, 25% to Ciprofloxacin (Figures 3 and 4). 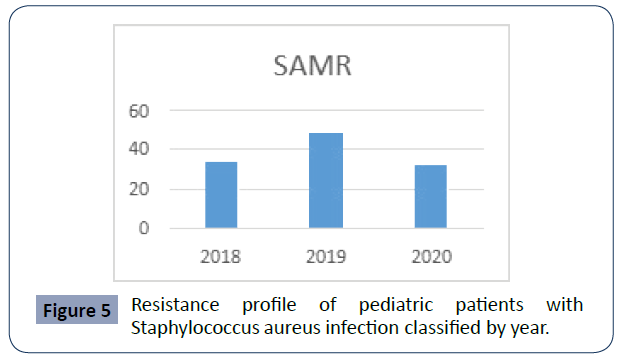 According to the literature, skin and soft tissue infection is the most common type of infection produced by Staphylococcus aureus, constituting 90-96% of infections caused by this microorganism and representing the most common manifestation of disease produced by methicillin-resistant strains acquired in the community [7], being prevalent in the pediatric population due to the ease of dissemination of these microorganisms and the high frequency with which children present skin lesions that favor local and disseminated infections [8]. The descriptive, retrospective study published in 2017 by Castaño et al. performed in pediatric population in the city of Medellin reported rates of 68% for cutaneous abscess [9], being the main reason for consultation in our study with 55%, and whose most affected region is the buttock, which correlates with the study conducted at Texas Children's Hospital in Houston by Bocchini et al. in which the prevalence of lesions in buttocks is 72%. [10] 77.5% of the patients required surgical intervention, which is fundamental, since it has shown clinical improvement and allows bacteriological confirmation of the causative agent [11].

Regarding the epidemiological profile, the mean age most affected was 44.2 months, which corresponds to 3 years, 6 months, and there was a predominance of male sex (66.5% of cases). The above is consistent with data found in the descriptive, observational, retrospective study conducted in 2019 by Guadrón and Corina where the age range of pediatric patients affected by this type of infection was between 3-5 years (47% of all patients) and male sex predominated (56%) [12]. In our study we found a prevalence of 37.5% for MRSA, which represents a higher percentage with respect to that found in studies of the same germ in the country (31%), in addition to representing double the number of isolations taking as a reference the multicentre study carried out this year in Spain by Ferrer et al, in which 16.6% was obtained [13] However, they are lower than those described in the pediatric population in other parts of the world [14], as in South America which reports a rate of 80% [15], with Argentina having the same percentage of resistance [16], so Oxacillin cannot be used as empirical treatment. Of the 30 community-acquired Staphylococcus aureus isolates with resistance to Oxacillin, 90% of them were also resistant to Cefoxitin, a result that can be compared with the study conducted in schoolchildren in Cartagena published by Castro et al, in which 100% of the strains resistant to methicillin were also resistant to Cefoxitin [17].

Cefoxitin is an alternative marker of the presence of this gene and the most potent inducer of the regulatory system of mecA of penicillin’s and therefore improves the expression of this gene and, consequently, also improves the detection of methicillin resistance [18]. Besides involving other families of antibiotics such as Macrolides Aminoglycosides, Fluor quinolones and Lincosamides related to methicillin resistance in our study, to which there was also resistance in the study conducted by Malavasi G in Costa Rica in 2018 for community-acquired Staphylococcus aureus [19], and in the one conducted in Spain by Rosal et al. in 2020, where the bacteria had resistance to Ciprofloxacin in 41%, Erythromycin 34% and Clindamycin in 26% [20], while in another part of the world, in Hungary, in a study published by Laub K, To' thpál A, KovácS E also in pediatric patients, Staphylococcus aureus had resistance of 12.1% for Clindamycin [21].

In relation to antibiotic treatment, despite the 37.5% corresponding to susceptibility of methicillin-resistant Staphylococcus aureus, the oxacillin scheme represented 12.5%, however the dual antibiotic scheme Oxacillin + Clindamycin was 40%, taking into account the sensitivity of the latter (70%); this result can be compared with that obtained in the descriptive study published in 2016 by Orjuela in the city of Bogotá [22], which reports use of Oxacillin + Clindamycin in 37.5% % in order to obtain coverage of SASM and MRSA, and with that published in Mexico by Del Valle, where Clindamycin was used in 69% as empirical treatment for soft tissue infection by Staphylococcus aureus [23], agreeing with the recommendation of the Infectious Diseases Society of America (IDSA) on the use of this antibiotic for the treatment of infections caused by this bacterium, due to the high cure rate found, especially in infections of community origin [24].

The appearance of multidrug-resistant strains in current medical practice results in increased morbidity and mortality, epidemic outbreaks, increased hospital costs and limited therapeutic options. Among the strategies to prevent and reduce the incidence of these infections is mainly the multidisciplinary work framed by an effective infection prevention and control program, which supports the surveillance of resistance, the control and adequate use of antibiotics and the permanent education of the health team

In conclusion, the present study on pediatric infections by community-acquired methicillin-resistant Staphylococcus aureus shows the high prevalence of this microorganism in the clinic studied and demonstrates that the clinical characteristics of the disease are mainly associated with skin and soft tissue infections, such as the appearance of abscesses, cellulitis, conjunctivitis and sepsis, the main reason for consultation being the development of abscesses in children, and as a second instance the appearance of cellulitis. It also reports on the susceptibility and resistance to the most used antibiotics for its treatment, such as Cefoxitin and Oxacillin, and denotes the importance of the therapeutic scheme used with a specific range of dual susceptibility to antibiotics such as Oxacillin + Clindamycin, allowing a knowledge that facilitates a satisfactory management and an important contribution to prevent the development of new antibiotic resistance mechanisms. Among the limitations of our study, we found that we are facing a retrospective descriptive research, with the restrictions that this entails to obtain all the data included for the analysis. It would be necessary to carry out specific serial studies in the pediatric population to obtain a better perspective of the problem and to be able to act on it. Finally, the extrapolation of our results to the national level is limited to only one city in Colombia, so it is not possible to generalize the data to the whole country, so future projects are expected to expand the information.