Measuring the academic achievement and identifying the factors that affect it are among the issues that have attracted the attention of psychologists. In this project, we intend to investigate the effect of group cognitivebehavioral therapy training on test anxiety in female students in the second year of high school in Shabestar city. Experimental anxiety analyses as; Sarason's 37-question questionnaire, Kolmogorov and Smirnov test, Wilkes- Lambda analysis , Toki test were used to determine the level of test anxiety in this study which is designed as yes or no questions which is analyzed on 50 individuals (from high school girl students) with test anxiety disorders as the test group and the subjects will have a direct relationship with the sex, age, base, economic and social status of the test subjects, including 50 individuals. Based on this hypothesis, we want to perform our statistical population, which is the same as the study of stress (According to Sarason's 37- question questionnaire) levels among students, and the final result should be in accordance with this hypothesis. So, our project is on the subject of stress in female high school students on the issue of stress control in student exam sessions. According to all of analyzes performed in this project, which showed that the level of confidence was (p<0.005), so our studies in the stress test showed that the level of confidence obtained was higher than the above number and the proposed hypothesis was rejected. The distribution of our data is at a normal level.

One of the main tasks of education systems in each country is to transmit the cultural heritage of the community, to nurture graduates talents, and to prepare them for active participation in society. Therefore, educating people to do different things is essential, and the question of whether or not to succeed in education is one of the most important concerns of any educational system in all societies. The success and academic performance of students in each community reflect the success of the education system in targeting and attending to individual needs. Therefore, the educational system can be considered as efficient and successful when the academic performance of its students at different levels is highest and highest. Researchers today place particular emphasis on the predictors of academic achievement, as studies of the factors affecting test anxiety and public health have become more and more prevalent in educational systems in the last three decades. Saying the question today, education plays an important role in one's life and future. Measuring the academic achievement and identifying the factors affecting it are some of the issues that have attracted the attention of psychologists because achieving positive outcomes in education (by identifying and controlling the factors that influence academic performance) leads to the comprehensive student and community development [1,2]. The World Health Organization defines public health as complete physical, mental and social health, not just the absence of illness or disability. It also considers public health to be equivalent to all methods or measures that are used to prevent mental illness [3].

Cognitive behavioral therapy was first started in the late 50's and early 60's in two parallel movements by Albert Ellis and Aaron Tebbeck in the United States. In the cognitive model, it is believed that a person's feelings and behavior are influenced by his or her thinking and information processing style. In other words, people feel the way they think, and their behavior is proportionate to the same thought and feeling.

Cognitive behavioral therapy is one of the treatments used for problems such as depression and anxiety. This type of treatment is a short-term treatment that is used to train people. In fact, people's feelings and behaviors change through their beliefs. In general, we feel the same way we think, and our behaviors are shaped by the same thoughts and feelings. The conceptual definition of test anxiety exam anxiety is a type of mental occupation characterized by self-awareness, self-doubt, and self-humiliation. This mental occupation attracts the attention of the person and disrupts the encryption and transmission of information. The conceptual definition of a subscale of anxiety. Anxiety is a natural reaction in which the mind tries to fight the external threat and prevent it. Feelings of anxiety are associated with anxiety or excessive attention to real or imagined issues and in scheme 1 is picture of important definitions of exam anxiety (Figure 1) [4,5]. 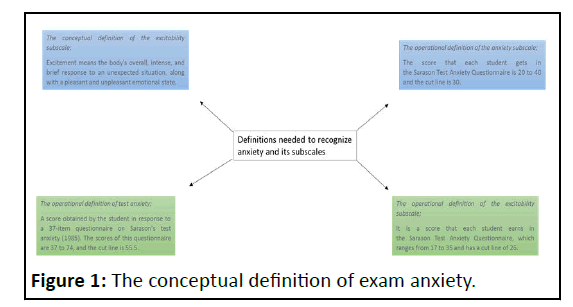 Exam anxiety is one of the situational anxieties that is closely linked to the performance and academic performance of millions of students and students in educational centers. Anxiety is an unpleasant experience at varying degrees affects areas of concern and excitement and affects the acquisition of information, how information is processed correctly and academic performance and motivations, and attitudes, with its own mechanisms, ability to improve and Analyzes creativity and talents and impedes students' academic growth [6]. Test anxiety is one of the variables associated with academic performance. Test anxiety is referred to as the causative agent of cognitive interactions in the attentional process, distorted and unrelated to task thinking, which may interfere with the learning process, the decline in academic performance, and the school's refusal. Therefore, test anxiety can affect students' educational process. In addition to reducing anxiety, paying attention to social skills, and enhancing it can be a way to improve learning and educational activities in schools. Because social skills are learned behaviors that enable one to interact with others effectively and avoid unreasonable social reactions. In this regard, the present study has investigated the relationship between Cognitive Behavioral Therapy on test anxiety in secondary school students (based on the questionnaire 37-question form) and presented the results to decrease the anxiety of female students in Shabestar city.

Experimental anxiety analyses as; Sarason's 37-question questionnaire, Kolmogorov and Smirnov test, Wilkes-Lambda analysis, Toki test were used to determine the level of test anxiety in this study which is designed as yes or no questions (prepared in University of branch Azad of Islamic of Shabestar).

The present study is a descriptive experimental study and is of practical purpose with pre-test and post-test with the control group. We was selected 50 individuals of 200 numbers with test anxiety disorders as the test group; and the subjects done have a direct relationship with the sex, age, base, economic, and social status of the test subjects, including 50 individuals. The pre-test will be taken from both groups and then been taken for the experimental group after passing the course and for pre-test and post-test for the control group.

This test is organized as a 37 items questionnaire of test anxiety, in the form of two answers with correct or incorrect answers, and based on its reporting method; it achieves the psychological and physiological states of the person during and before the exam. A basic division of this questionnaire was that the first 20 questions were related to anxiety or cognition and the next 17 questions were related to emotional or physical.

To examine this project (The rate of stress in female high school students), we must first hypothesize stress: Hypothesis 1: Cognitive behavioral group training is effective in the anxiety of secondary school girl students.

Multivariate covariance has been used to test this hypothesis. Explaining this finding, it can be said that test anxiety is a type of social anxiety that casts doubt on one's abilities and results in decreased ability to cope with situations such as the test situation, situations that subject the person to evaluation and require resolution. Or are they an issue, so anxiety causes one to lose their peace of mind and to panic about the exam and the test scene, as stated: Anxiety is usually an unpleasant emotional state and, it is vaguely associated with distress, fear, panic, and anxiety. In this case, the person may not be able to bring what he or she has learned onto the paper, so it can be stated that the person with test anxiety knows the materials but his/her anxiety prevents him/her from showing his/her information during the exam. People with high test anxiety are skeptical of their abilities and show low self-esteem in learning that these behaviors impair or impair performance [7-9]. As points out, test anxiety leads to self-doubt and skepticism about abilities and often leads to negative cognitive appraisal, lack of concentration, undesirable physiological responses, and one's expected academic performance decline. There was a significant inverse relationship between anxiety scores and test scores. Therefore, anxiety is one of the motivational and cognitive variables that significantly influence learners' academic achievement, learning, performance, attention, concentration, and information retrieval and its consequent diminished ability to cope with assessment situations. It provides solutions to problems and diminishes academic efficiency [10].

Based on this hypothesis, we want to perform our statistical population, which is the same as the study of stress (According to Sarason's 37-question questionnaire) levels among students, and the final result should be in accordance with this hypothesis. So, our project is on the subject of stress in female high school students on the issue of stress control in student exam sessions. To do this, we need a statistical population with a large number of samples, but in a small town of a province in a country and in a high school for girls, it is limited to a limited number, in which 200 people, including In between, we randomly selected 50 people and used the above hypothesis and a 37-question questionnaire sarason to address the subject of exam stress.

Prove the hypothesis based on data measurement

Data analysis is a multi-step process in which data collected in various ways are summarized, categorized, and finally processed to provide a variety of analyzes and links between data to test hypotheses. Provide. In this process, data is refined both conceptually and empirically, and various statistical techniques play an important role in inference and generalization.

One way to check the validation of the stress test is based on the Kolmogorov-Smirnov analysis. Since one of the conditions for the normality of the dependent variable is that the level (pre-exam, past-exam) of significance is Kolmogorov and Smirnov test (P<0.05), so since the significance level of this test is higher than 0.05, its normality is assumed (Table 1).

The Toki test has the least significant difference. All differences are compared with a constant value regardless of the amount of averages compared the critical value is calculated to compare the mean differences from the above relationship. Variance analysis tutorial variation analysis: A Toki test is obtained in which is the number of treatments and f the degree of freedom of error.

The results of the Tukey post hoc test also showed that test anxiety showed a difference (-10.415) with significant (P<0.005) between the test anxiety management training group and the control group after the intervention. Therefore, the null hypothesis is rejected and the research hypothesis is confirmed that cognitive behavioral group training is effective in reducing test anxiety (Table 3).

All the information obtained from this research work is the result of an effort made in the laboratory over many years with helping of Dr. Sahebi (under the supervision of Department of Psychology, Islamic Azad University of Branch Shabestar, Iran, 2017-2019).