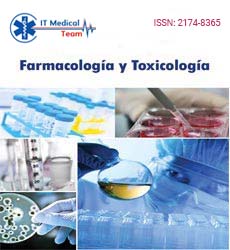 Pharmacology and Toxicology publishes original research articles, reviews, and conference abstracts whose subject matter is related to the two disciplines that make up its name. Contributions must be unpublished and cannot be simultaneously reviewed by any other journal. The manuscript must be submitted in Microsoft Word or compatible format, with the following page configuration:

The sheets will be numbered consecutively in the lower central part.

The maximum total length will be 20 pages

Manuscripts and attached material must be sent online through the web submit manuscript an e-mail attachment to the Editorial Office at https://www.itmedicalteam.pl/submissions/farmacologiay-toxicologia.html or [email protected]

Structure of the Articles

Title page On the first page of the article, the following information will be indicated, in the order cited here:

b) Authors: "Name + Surname," (in this order) of each of the authors, identifying the affiliation of each of them by superscript numbers.

The writing of the text in impersonal is recommended. In the case of original articles, the following sections should be considered in the order mentioned:

d) Introduction: it will be brief and must provide the necessary information so that the reader can understand the text that follows.

e) Material and Methods: it will include detailed information on the subjects included and the methods used, including statistical procedures. In studies with humans, reference should be made to compliance with the guidelines of the Declaration of Helsinki, and in animal studies, the approval of an ethical committee for animal experimentation will be recorded.

f) Results: presentation of the results of the work, which may be supported by figures or tables. g) Discussion: the results obtained and the bibliographic background will be integrated and interpreted so that conclusions can be reached.

h) Conclusions: List in which the conclusions derived from the work are summarized in a summarized way i) Acknowledgments: if deemed appropriate j) Bibliography: Bibliographic references will be presented according to the order of appearance in the text with the corresponding correlative numbering included in square brackets [], according to the "Uniformity requirements for manuscripts presented for publication in biomedical journals" prepared by the International Editors Committee of Medical Journals (Med Clin (Barc) 1997; 109: 756-63). Also available at: https: //www.icmje.org/. All authors will be listed if they are six or less; if there are seven or more, list the first six and add the expression "et al" after a comma. The names of the journals should be abbreviated according to the style used in the Index Medicus / Medline: «List of Journals Indexed» which is included every year in the January issue of the Index Medicus, also available at: https: // www .ncbi.nlm.nih.gov / entrez / jrbrowser.cgi. Here are two sample formats for articles and book chapters: Tung KH, Angus JA, Wright CE. Contrasting cardiovascular properties of the µ-opioid agonists morphine and methadone in the rat. Eur J Pharmacol 2015; 762: 372-81. Weinstein L, Swartz MN. Pathologic properties of invading microorganisms. In: Sodeman WA Jr, Sodeman WA, (editors). Pathologic physiology: mechanisms of disease. Philadelphia: Saunders, 1974; p. 457-72. Any other type of publication must be referenced according to the criteria of the ICMJE (Uniform Requirement for Manuscripts).

k) Tables: They will be presented at the end of the text, after the bibliography, on pages separated by a page break, clearly indicating their numbering (in Roman numerals), correlative according to their appearance in the text. The table footer will detail the meaning of the abbreviations that appear in it, as well as the calls, indicated correlatively with a letter in superscript (eg a, b).

l) Feet of figures: Figures will be numbered consecutively in Arabic numerals according to their appearance in the text. The figure captions will be included in the article on a page immediately after the tables, never forming part of the same figure. The reviews should have a structure similar to that of the articles, except in the introduction, material and methods, results and discussion sections, which will not be considered.

Figures The images will be provided in separate files. For (digitized) photographs the preferred format is TIFF, with a resolution of 300 dpi for an image size of 8.5 cm wide (and equivalent inverse proportions, that is, 150 dpi for an image width of 17 cm, etc. .). Regardless of the program with which they have been prepared, the figures (especially graphics) should preferably be sent in TIFF format. The letters, numbers and symbols that appear in the figures must be clear and uniform, and of sufficient size so that the reduction of the figure does not lead to its illegibility. Figures will be numbered consecutively in Arabic numerals according to their appearance in the text. If the author proposes a figure obtained from another publication, he must have the corresponding permission and accompany it.