The African lesser threadfin, Galeoides decadactylus, is one of the fish species commonly caught in the nearshore waters of Benin. It is well appreciated for the quality of its flesh. But since these twenty past years, the African lesser threadfin’s production has been decreasing with more small-sized fishes appearing in catches, and little is known about the species population dynamics. Therefore, the growth and mortality parameters of the lesser African threadfin off Benin’s near shore waters were investigated using length–frequency data of 1027 specimens sampled from Gill net hauls over a period of 12 months. The length–weight relationship was computed from linear regression analysis. Galeoides decadactylus exhibited negative allometric growth (b = 2.955 ≠ 3; p < 0.05) with an abundance of small sized specimens. The von Bertalanffy growth constants for Galeoides decadactylus were TL∞ = 26.25 cm, K = 0.800 yr-1, and t0 = -0.60 yr with a derived growth performance index of 2.741.The instantaneous rates of total mortality (Z), natural mortality (M), and fishing mortality (F) were respectively 1.88, 1.64 and 0.24 per year. The rate of exploitation (E = 0.13) showed an under-fishing of this species. This fishery could be well managed by increasing the fishing effort. Decreasing of the African lesser threadfin population in the catches could be attributed to other factors.

Fishing is an important activity in the world because it is staple instrument in human’s subsistence (Ekouala, 2013). In Benin, the fishery’s sector contributed a lot in the national economy (Agrer, 2011). But, since some years, the Maritime’s production has decreased (Direction des pêches, 2006; 2012).

The overexploitation is due in the one hand to multiplication of sedentary fishery infrastructures (dam, acadjas, whedos) and in the other hand to utilization of devastating engines. This is expressed by a situation of strong regression of capture day by day in spite of increasing of fishery efforts and engine performances (Laleye, 1995; Leveque and Paugy, 1999).

One of the non-selective fishery’s gears in Benin is the Gill net locally named “Soovi” because its mesh sizes are small (30 -40 mm) (Kebe et al., 1997). With this net, the most caught species are: Ilisha africana, Pseudotolithus senegalensis, and Galeoides decadactylus. G. decdactylus of Polynemidae family is one of high value and much sold species (Anato, 1996; Fiogbe et al., 2003).

G. decdactylus is well distributed from the south of Mauritania to Angola (Sidibe, 2010) including the nearshore waters of Benin. This species is well appreciated by the consumers because of the quality of its flesh (Fischer et al., 1981). Its body is fusiform, greyish with two dorsal fins widely speared. The caudal fin is large and forked, and the pectoral one is inserted above the lateral line; the mouth short and infer (Feltes, 1993; Edema and Osagiede, 2011).

This species lives in muddy bottom of coastal zone and often in the estuaries and lagoons (Domain, 1989). The physiological needs of lesser African threadfin caused seasonal migrations in function of its reproduction (Samba, 1974; Lopez, 1978; Domain, 1979) and the cycle of its favorite preys (Konan et al., 2012; Villanueva, 2004).

Since these twenty past years, the lesser African threadfin’s production has been decreasing with more small-sized fishes appearing in catches, and little is known about the species population dynamics. Therefore, the aim of this work was to investigate growth, mortality parameters and exploitation rate of the African lesser threadfin off Benin’s nearshore waters for conservation and management measures.

The study was performed using specimens of Galeoides decadactylus sampled from Gill net hauls landed at the artisanal fishing port of Cotonou (Figure 1). The type of gill net considered is constituted by nets with 30 - 40 mm mesh size. Specimens are sampled twice a week during twelve months (August 2014 to July 2015). Approximately 40% of the total biomass of Galeoides decadactylus (1027 specimens) was sampled in the commercial catches. A total of 956 specimens were sexed. The samples were conveyed in thermos cool boxes to the laboratory.

Figure 1: Location of the Sampling Site.

The total length (TL) of each specimen was measured to the nearest millimeter from the tip of the anterior or part of the mouth to the extremity of the caudal fin. Fish total weight (W) was measured to the nearest 0.1 g after blot drying with a clean hand towel. The specimens were dissected and the internal organs were removed. The gender was determined by macroscopic examination of gonads (King, 1995). The gutted body weight (We) was measured to the nearest 0.1 g. Length data were pooled monthly and converted into length frequencies with a constant class interval of 2 cm. The mean lengths and weights of the classes were used for data analysis using the format accepted by FiSAT (Gayanilo and Pauly, 1997).

The size frequency was analyzed at a 2 cm interval total length class using a histogram to determine the type of distribution which characterizes the fish population.

The fluctuations of the sex ratio according to fish size provide a useful tool to examine the biological characteristics of the fish species, such as sexual inversion, longevity in relation to sex, vulnerability to fishing gear and the spatial, seasonal and even daily distribution of species. With the numerical abundance by sex, the following ratio was computed (Anato, 1999):

The commonly used relationship W = aTLb was applied (Ricker, 1975) to establish the length–weight relationship by sex, where W is the total weight (W, g), TL is the standard length (TL, cm) and “a” and “b” are intercept and slope of the regression curve of the length and weight of the fish, respectively.

The comparison of the slope “b” to 3 was done with student’s t-test in Minitab software version 16 to establish whether specimen of G. decadactylus grew isometrically.

Estimation of growth parameters is essential in order to determine the stock state. The model of von Bertalanffy (1938) is the most used in studies of fish’s growth:

Where, TL (cm) is the total length of the fish, L∞ (cm) is the asymptotic length of fish. It is the maximum length that a fish could have if it lived many years, K (yr-1) is the growth coefficient, t0 (yr) is the theoretical age of fish when his length is zero. It was determined by the Pauly’s equation:

where t (yr) is the age of fish at various lengths and calculated by the inverse of von Bertalanffy growth equation.

Pauly and Munro (1984) proved that for fishes whose growth followed the von Bertalanffy equation, the growth parameters K and L∞ were computed by the relation:

where φ' is growth performance index. This index is an indicator of fish’s well-being.

The total mortality (Z) had been estimated by realization of linearized length-converted catch curves (Sparre and Venema, 1992). Instantaneous natural mortality rates (M), were determined by using the Pauly’s (1980) empirical equation:

with T the annual temperature of Benin nearshore waters (T = 29.5°C). The fishing mortality (F) rate was determined by the formula:

The first capture length was estimated by the software FiSAT. It gives a clear indication on the size of fishes that can be caught by the fishing gear. The probability of capture gave an indication on real size of fish in fishing area that might be caught by the Gill net “Soovi”. This probability was an extrapolation of the length converted catch curve.

This rate was given by FiSAT from linearized length converted catch curve of each species. It was compared to the optimum criterion of 0.5 (Pauly and Munro, 1984).

A total of 1027 specimens of G. decadactylus were examined comprising 701 males, 255 females and 71 unsexed. The size range was 10.3 cm - 31.1 cm, and the weigh range was 19.6 g - 327.8 g. The distribution for both sexes was unimodal (16 cm-18 cm) (Figures 2-4). Small sized specimens were more numerous and represent 70% of the total population. Males were greatly more numerous than females. The sex ratio for the studied population was 1:0.36 meaning 100 males for 36 females (Table 1). The length–weight regressions for G. decadactylus are reported in Table 2. The corresponding relationship graphs are presented in Figures 5-7. There is no significant difference between males and females in the length–weight regressions (p > 0.05). The total weight (W) was strongly correlated with total length (TL) (r2 = 0.95). The growth parameters which are the asymptotic length (L∞), the growth coefficient (K), the theoretical age at length zero (t0), and the growth performance index (φ’) were estimated by FiSAT and presented in Table 3. Von Bertalanffy’s function equation is 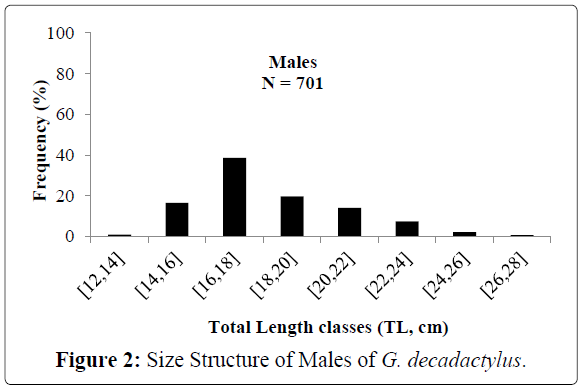 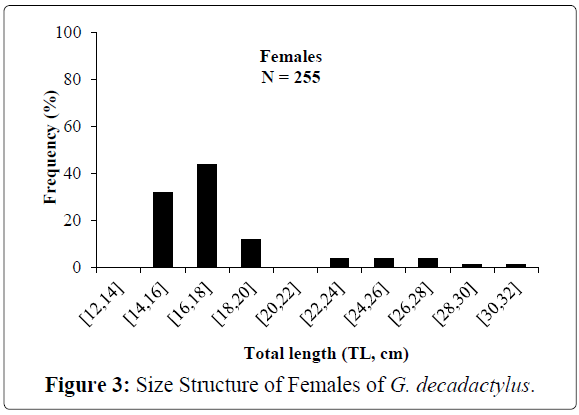 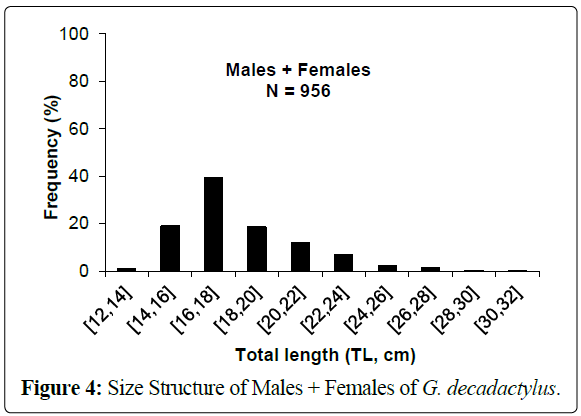 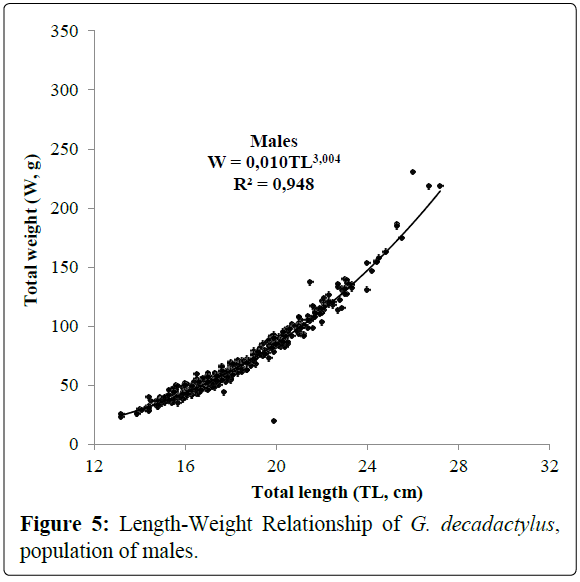 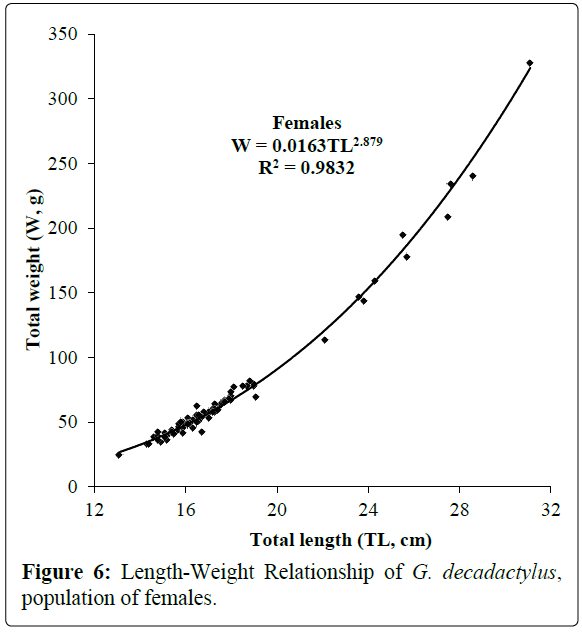 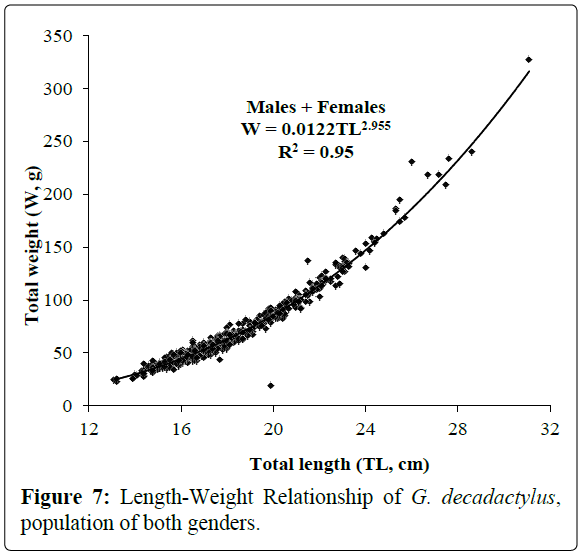 Figure 7: Length-Weight Relationship of G. decadactylus, population of both genders. 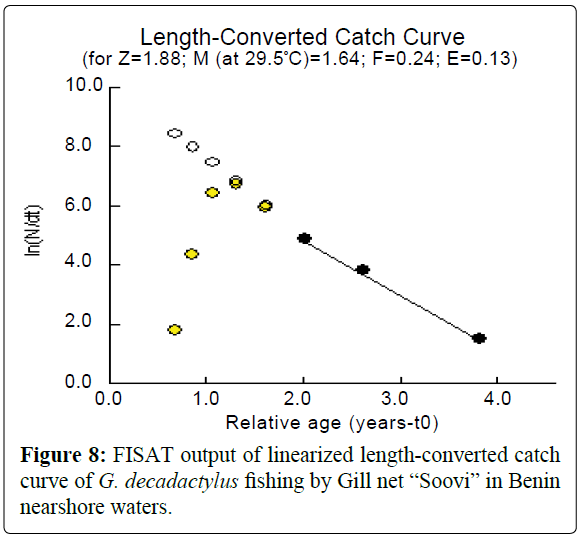 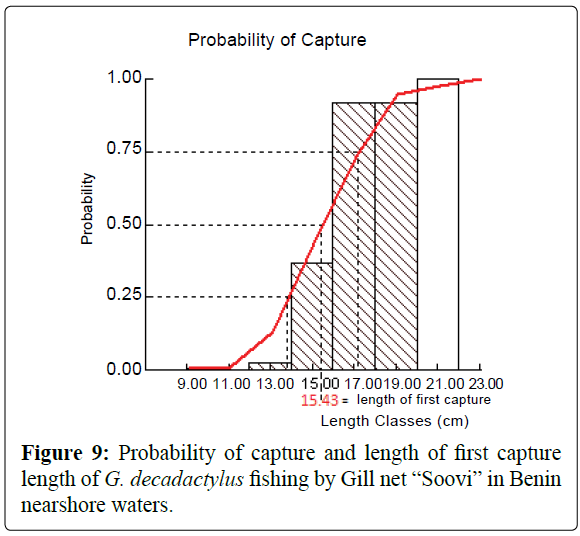 The population structure showed that small specimens are more vulnerable to the Gill net “Soovi. These results are similar to those obtained by Faggianelli (1984) in Togo. This author reported that the dominant lengths in catches are ranged from 15 cm to 20 cm. In the current study, the sex ratio is in favor of males. Ezekiel et al. (2013) in Nigeria found different results. In fact, Galeoides decadactylus is a species with a transitory hermaphroditism (Lopez, 1978), which counted in majority males with small length. This is in accordance with our results. The obtained value of “b” (b = 2.955) for the population in this study, showed a negative allometric growth. The fish’s length increase rapidly than its weight. Ezekiel et al. (2013) and Emmanuel et al. (2010) in Nigeria reported similar result. However, Fiogbé et al. (2003) in Benin and Konan et al. (2012) in Ivory Coast found an isometric growth for this species while N’Jock (1990) in Cameroon reported a positive allometric growth. These differences can be attributed to difference in sex, season, and time of sampling and environmental conditions. Moreover, environmental conditions had an effect on the length and the weight of fishes (Kundsen, 1962). Table 4 shows several values of length-weight relationship obtained on G. decadactylus in many studies. The value of asymptotic length in this study is different (lower) to those obtained by Samba (1974) in Guinea and Konan et al., (2012) in Ivory Coast. This difference can be explained by the selectivity of the Gill net “Soovi”, and by the diversity of determination methods of these parameters. The growth coefficient in this work is higher than those obtained in Guinea by Samba (1974) and in Ivory Coast by Konan et al. (2012). It could be concluded that the specimens of Benin stock grew faster than the Guinean’s. This difference was influenced by the upwelling and the target period. Indeed, the individual growth is conditioned by the reproduction characteristics of the species (temperature, available food), thus determined factors of individual growth. Growth performance index of G. decadactylus in the present study is lower than what found Konan et al. (2012) in Ivory Coast. The unfavorable environmental conditions and the weak food availability could be the major reasons of this difference. The estimation of instantaneous natural mortality in this work was higher than those obtained by Cavarivière and Thiam (1994) in Senegal, and Konan et al. (2012) in Ivory Coast. This difference could be attributed to the specimen’s sensibility to changes of natural factors and to the life in a weak productivity environment. This specie in Benin near shore waters was more available for predators. There is a strong correlation between natural mortality rate and longevity. Table 5 gives different values of longevity and natural mortality rates. It could be concluded that when the natural mortality is weak, the longevity is high. The exploitation rate of G. decadactylus’s stock with the Gill net “Soovi” is E = 0.13. This stock is under exploited with this gear. In addition, the determination of the MSY (Maximum Sustainable Yield) i.e. the quantity of fish of this species needed to be taken in the environment per year for a sustainable exploitation could be assessed.

We are grateful to all the fishermen of Cotonou Artisanal Fishing Port and to the authorities particularly Mr. EDO.