The present study was conducted to determine Hg levels in edible tissues of the Indian mackerel Rastrelliger kanagurta collected at Karachi Harbour of Pakistan between March 2013 and February 2014. Hg levels ranged from 0.01 to 0.09 with mean ±SD 0.042±0.023 mg/kg dry wt. The Hg level in R. kanagurta is relatively low when compared to those studied in other parts of the world and is able to meet the legal standards by EU Commission Regulation and other international food standards. The findings obtained were also compared with established allowable weekly intake values. It is concluded that the Hg levels in the Indian mackerel from Karachi coasts did not exceed the permission limits (0.5 mg/kg). The results show that the Indian mackerel appears to be useful bio-indicator due to their accumulation of Hg, however, continued sampling is required for further researches.

The increasing use of the domestic and agricultural drainages and waste chemicals represents the most dangerous pollution in the marine coast. The pollution of marine ecosystems by heavy metals especially non-essentials is an important environmental problem as they constitute some of the most hazardous substances that can be up-taken and accumulated by marine organisms. Karachi coast of Pakistan is exposed to pollution associated pollutants including heavy metals from agricultural run-off from various point and non-point sources (Saleem and Kazi, G.H., 1998; Ahmed et al., 2015; Although Elahi et al., 2015). The most important heavy metal from the point of view of marine coastal pollution is Hg which has no known biological function. It is nonessential trace metal to living organisms and toxic at even low concentrations. Hg is one of the heavy metals of current interest in environmental contamination studies since the appearance in Japan of Minamata disease in the 1950s. It was used as a catalyst in the production of acetaldehyde, a chemical employed in the production of plastics. Methylmercury-contaminated wastewater, a by-product of the process, was pumped into the bay, increasing highly in the coast that accumulated local fish. Local people of Minamata, who consumed heavily on fish for food, were at risk of exposure to methylmercury led to severe neurological damage and died more than 900 people. Moreover approximately two million people from the area suffered health problems (McCurry, 2006). Owing to the common occurrence of Hg in industrial effluents, its extreme toxic properties to human and its existence in coastal waters as a potential pollutant, Hg has caused increasing alarm. It is highly toxic to a wide variety of living organism including man (Khansari et al., 2005) and is considered hazardous to human health at concentrations above 1 mg/kg (U.S. Food and Drug Administration, 2014). The U.S. Environmental Protection Agency (EPA) recommends safe levels for fish should not exceed 0.30 mg/kg. The consumption of fish should not be completely eliminated because of important healthy diet. Khansari et al. (2005) emphasized that fish are the single largest sources of Hg for man. Clarkson and Magos (2006) pointed out that Hg vapour is emitted to the atmosphere from anthropogenic and natural sources. Anthropogenic sources include emissions mainly from coal-burning power plants and municipal incinerators. Natural sources include volcanoes, rocks, soils and water surfaces. However, fish as biomonitor have been used for many years to indicate metal pollution in marine environment (Sucman et al., 2006). Fish has health benefits and is good source of protein, vitamin B and omega-3-fatty acids. It should be kept in mind that the health benefits of consuming fish outweigh the potential risks.

This study focuses on the Indian mackerel Rastrelliger kanagurta which is highly commercial fish and is consumed fresh, frozen, canned, dried-salted, smoked and even as a fish sauce (Collette, 2001). R. kanagurta (Cuvier, 1816) is pelagicneritic and oceanodromous fish (Riede, 2004). Adult individuals occur in coastal bays, harbours and deep lagoons, usually in some turbid plankton-rich waters (Collette, 2001). They have been known to feed on a variety of organisms, mainly phytoplankton (diatoms), small zooplankton especially cladocerans, ostracods, larval polychaetes (Collette, 2001) and macroplankton such as larval shrimps and fish (Collette, 1986). Thus these organisms are in contact with heavy metals including Hg in the water column and sediments. The dietary uptake of Hg is therefore an important exposure route possibly allowing metal biomagnification up trophic levels in the Indian mackerel R. kanagurta. The purposes of the present study were to determine if Hg is present in R. kanagurta from the most important fishing harbour of Karachi, Pakistan and to compare the concentrations of Hg present with the previous studies and the guidelines set down by the international organisations and Commission Regulation (EC) for the safe consumption limits of fish.

R. kanagurta were collected at Karachi Harbour monthly between March 2013 and February 2014. Obtained fish were placed in plastic bags and transported to the laboratory in freezer bags with ice. Total body length (cm) and weight (g) were recorded for fishes. Eight individuals from each season were chosen and were rinsed in clean sea water and then placed in plastic bags and frozen at -21°C until their analysis. The muscle tissues of the fish were prepared for analysis according to the method described by Bernhard (1976). Two gram homogenate samples of dorsal muscles of each fish samples were placed into the crucibles and were dried in furnace at 600ºC temperature for 3 hours and then dry ash were weighted in digital balance. These ashes were digested in the flasks containing 10 ml of concentrated HCl. When the digestions were completed, the solutions were cooled to ambient temperature and the digest was filtered and made up to 100 ml in a volumetric flask using ultrapure water as the diluent. The analysis for total mercury was performed on Mercury Hydride system (cold vapour Technique) Atomic Absorption Spectrometer. The AA Analyst 700 atomic absorption spectrometer with 253.7 wavelengths was used to determine Hg concentration in tissue samples of the fish and the results were given as mg/kg dry weight. The heavy metal analyses in the fish samples were recorded as means ± standard deviation (SD). Statistical analysis (ANOVA) was performed to test the differences between seasons and Tukey test was used to determine the differences (Zar, 1984). The weekly intake levels were estimated using the maximum Hg levels in R. kanagurta EWI (Estimated Weekly Intakes) = maximum level of Hg (mg/ kg) multiplied by fish consumption (kg/70 kg body weight/week).

The mean lengths (cm) and weights (g) of R. kanagurta from Karachi Harbour between March 2013 and February 2014 was given in Table 1. The lengths and weights of collected fish samples ranged from 21 to 30 cm and 99 to 192 g, respectively. The fish samples were consumable (market) size. In this study Hg levels in the Indian mackerel ranged from 0.01 to 0.09 mg/kg dry wt. (Table 2). Hg enters the food web when it is absorbed by phytoplankton species. Phytoplankton are eaten by zooplankton and other consumers, which then are eaten by larger and larger fish (Griesbauer, 2007). R. kanagurta feed on mainly phytoplankton (diatoms), small zooplankton especially cladocerans, ostracods, larval polychaetes (Collette, 2001) and macroplankton such as larval shrimps and fish (Collette, 1986). There was no statistically significant difference between the concentrations of the metals among seasons (P>0.05; F=0.974). However the total mercury levels in the samples was highest in the autumn inter- monsoon, followed by spring inter- monsoon, North-east monsoon and Southwest monsoon. It may be suggested that these variations of Hg levels in R. kanagurta are attributed to physiological conditions, environmental variations and feeding activity. The apparent high Hg levels in the muscle tissues of the Indian mackerel is likely due to food web transfer into surface waters through the upwelling of phytoplankton rich waters that was occurring during the autumn inter- monsoon. 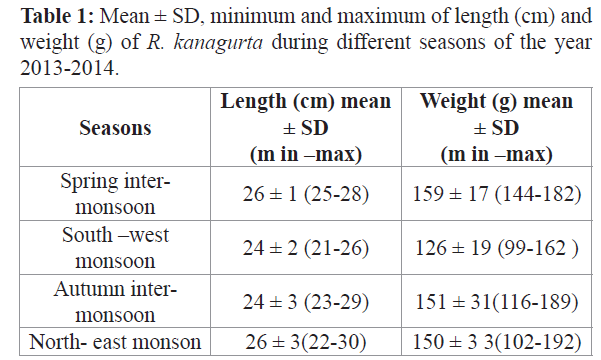 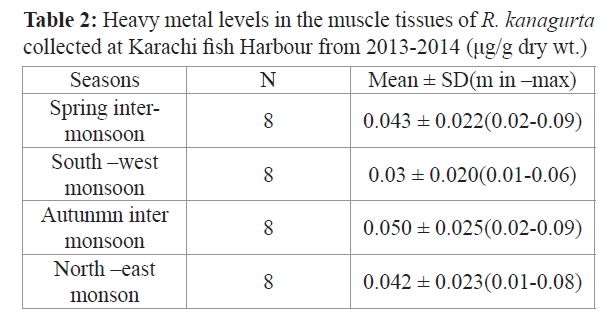 Table 3: Analysis of variance (ANOVA) in R. kanagurta from the Karachi Fish Harbour.

The observed Hg values (0.01-0.09 mg/kg dry wt.) in R. kanagurta of the present study were lower than Bay of Bengal, India (Mukherjee and Bhupander 2011) and North East Coast of India (Kumar et al., 2012). This might be partly related to the fact that the surface water of Indian coasts contains a relatively large amount of Hg. The highest value of Hg (1.60 mg/kg) found in R. kanagurta within six marine species from north eastern Bay of Bengal, India (Mukherjee and Bhupander, 2011). Similarly, Kumar et al. (2012) determined high concentrations (ranged from 0.27 to 9.50 and the mean ±SE 1.22±0.20 mg/kg dry wt.) of Hg from North East coast of India. These data are in agreement with data from previous studies (Kamaruzzaman et al., 2010; Rejomon et al., 2010) evidencing that R. kanagurta has been widely used as bio-indicators of marine pollution by heavy metals.

Shah et al. (2010) have reported high Hg concentrations (0.721-1.41 mg/kg on dry wt.) in muscle tissues of Scombermorus commersoni, Otolithes ruber, Pampus argenteus and Arius spp. from fish markets of Karachi. Jinadasa et al. (2010) have also found high concentrations of Hg in the muscle tissues of Thunnus albacores (0.14-0.88 mg/kg wet wt.), Xiphias gladius (0.20-2.58 mg/kg wet wt.) and Lutjanus sp. (0.09-0.28 mg/kg wet wt.) from the local fish market of Sri Lanka. The highest Hg levels (3.97 ± 2.67 mg/kg dry wt.) were noted in X. gladius as top predators of pelagic food webs, caught in waters surrounding Reunion Island of the western Indian Ocean and it is suggested that large fish naturally bio-accumulate Hg and this can pose health risks to the fish themselves and to their predators, including humans (Kojadinovic et al., 2006). These data showed that Hg can be used as biomarker for water pollution which the contents of the metal in the tissues of the fish.

The results of this study revealed that consuming R. kanagurta from the Karachi fish Harbour may not have harmful effects because Hg levels in edible tissues are below the permissible limits. Moreover, comparisons with the European Union, Russian Federation food standards, Georgian standards, Chine standards, Australia New Zealand food standards and Turkish acceptable limit (0.5 mg/kg wet wt.) (Commission Regulations, 2001 and 2006; GAIN Report, 2002 and 2006; Georgian Food Safety Rules, 2001; Australia New Zealand Food Standards, 2011; TGK, 2002 and 2009), demonstrate that the content of these metals in the muscle tissue of the Indian mackerel is lower than the guidelines mentioned above.

Mercury is one of the most dangerous chemicals and is prone to accumulate in aquatic biota due to reduced biodegradation of its derivatives. It is concluded that smaller fish that are lower down in the food web have lower Hg levels in their tissues while larger one that are higher up in the food web have higher levels (Griesbauer, 2007). Thus, fish are extensively used as bio-monitors for assessing heavy metal contamination of coastal areas and the health state of marine ecosystems. The Hg level in R. kanagurta is relatively lower than those in other studies. The results of the present study were compared with the international legislations valid in the European Union. It was indicated that the Hg levels did not exceed the permission limits (0.5 mg/kg) and the Indian mackerel from Pakistan coast is consumed without any danger to health.